We have taken a look at glasses from a few different manufactures that claim to help relieve eye strain while working on your PC. From our experience they can be very helpful as long as you can get over the yellow tint that they all have. Even then the designs we have seen have resembled normal glasses or in one case even they looked just like a pair of hunting glasses. The problem with that is when you’re trying to game with your headset on they can still become uncomfortable. SteelSeries has been working with Gunnar glasses to design a few pair of glasses designed specifically to be comfortable with your headset on. Today we will be taking a look at one of those glasses called the SteelSeires Desmo. We know how the glasses perform but will they be comfortable for gamers? Let’s find out!

Having seen both Gunnar’s packaging and now SteelSeries’s packaging, it’s clear that SteelSeries had full control on the packaging of the Desmo’s. The package has their traditional style and look along with a plastic window on the front letting you see the glasses. Around back it’s simple but still informative with a short list of reasons to use SteelSeries eyewear. The back of the package is actually a door, lifting open to show those same reasons in a few other languages and also giving you a window into the package from the back to see the Temples or the arms to some people. Ripping the packaging open there wasn’t much more to find other than the glasses themselves, a microfiber bag that doubles as a cleaning rag, and a folded up Gunnar glasses brochure. 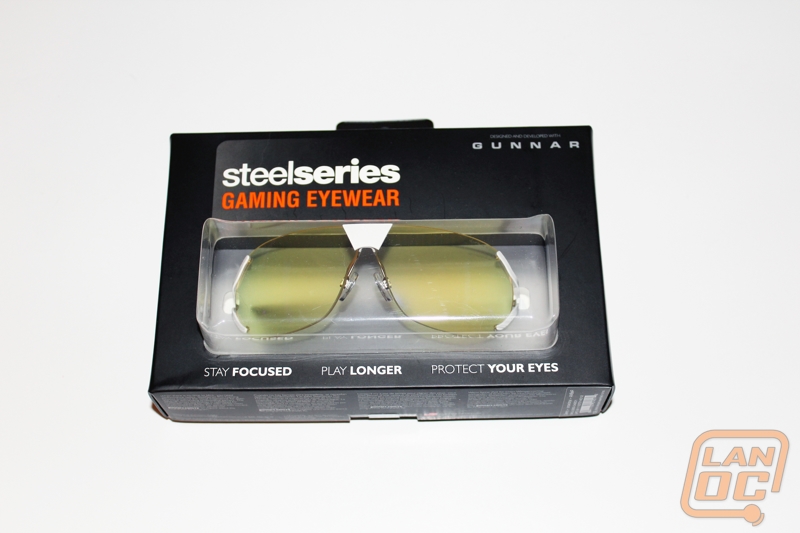 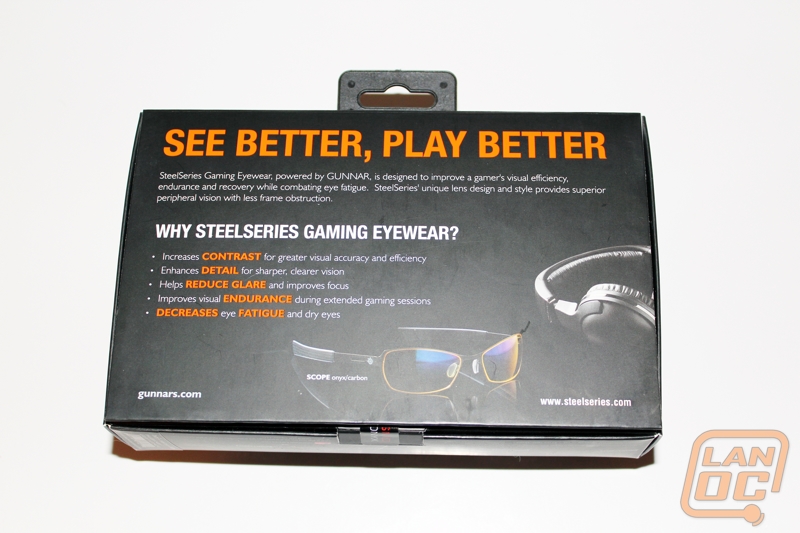 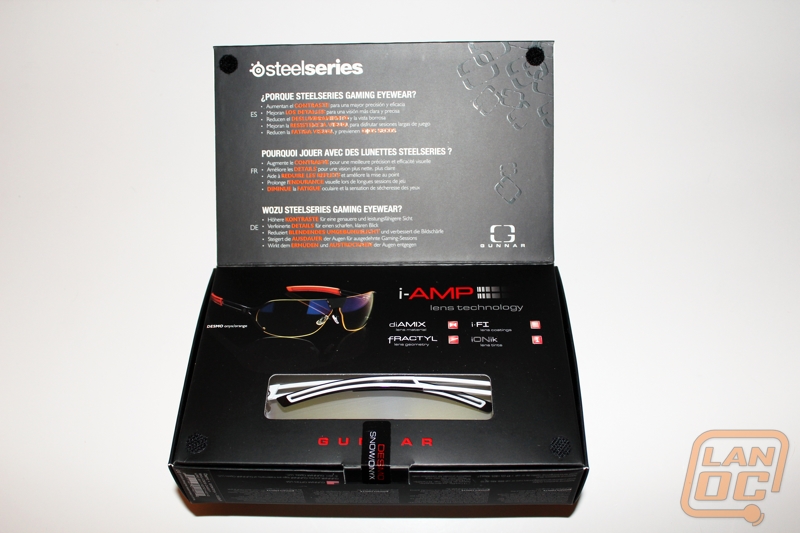 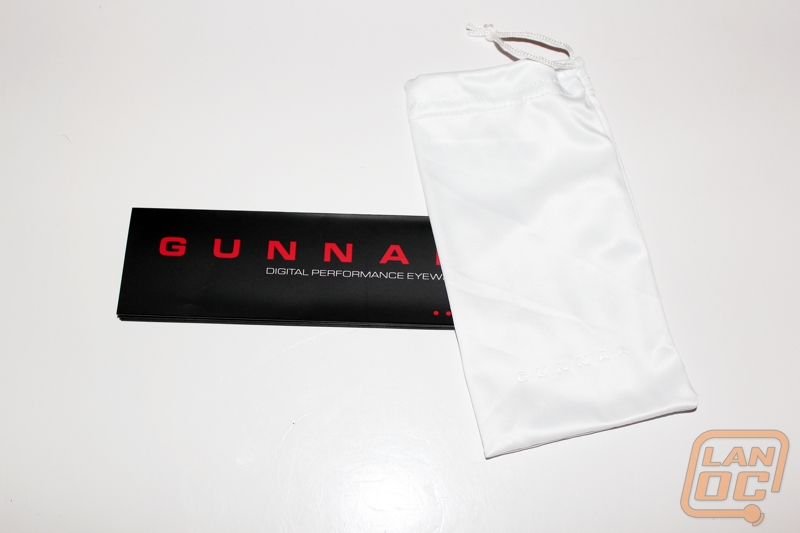 The performance of the Desmo’s really can be broken up into two parts. They advertise the glasses to increase contrast, enhance detail, reduce glare, improve visual endurance, and decrease eye fatigue and dry eyes. So the first half of the performance is how well do the glasses live up to what they claim and the second half is how comfortable are they to wear both in and out of game. Let’s break it down. 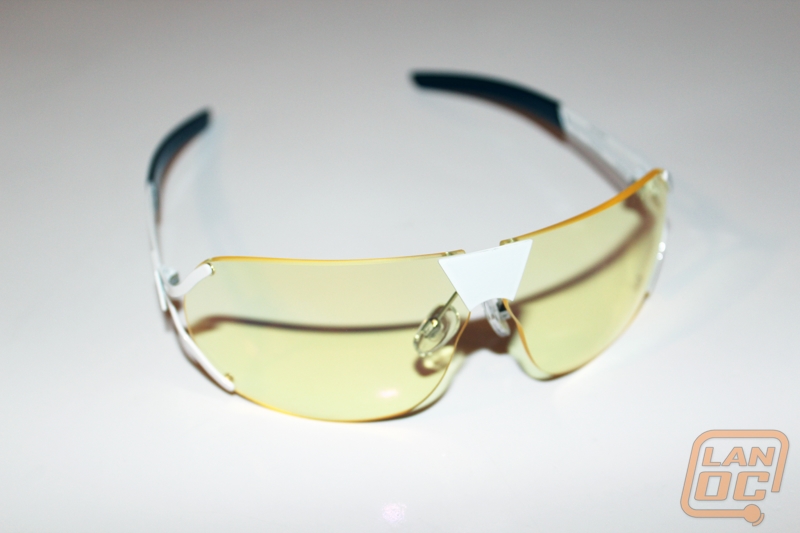 Almost instantly after putting the glasses on after a full day of staring at a monitor I feel a slight relief on my eyes. I didn’t realize how much I was squinting and straining until after I stopped with the glasses on. If I notice a difference right out of the box long turn relief isn’t a problem at all. But SteelSeries also advertised that they would increase contrast and detail, does that happen? Well if your idea of increasing contrast is more yellow they do it without a question. In my opinion they don’t really help with increasing contrast, but truthfully I don’t think increased contrast in game is something I need. The last attribute promised is reduced glare, how do they perform? They did a good job of preventing glare on the glasses themselves, but glare on other objects in the room were un effected. This wasn’t too big of a deal for me now, but years ago with CRT’s it would have been. 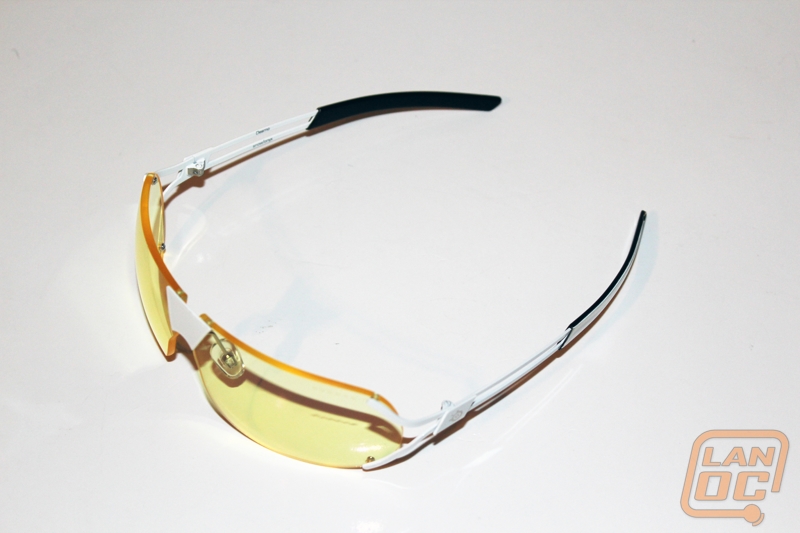 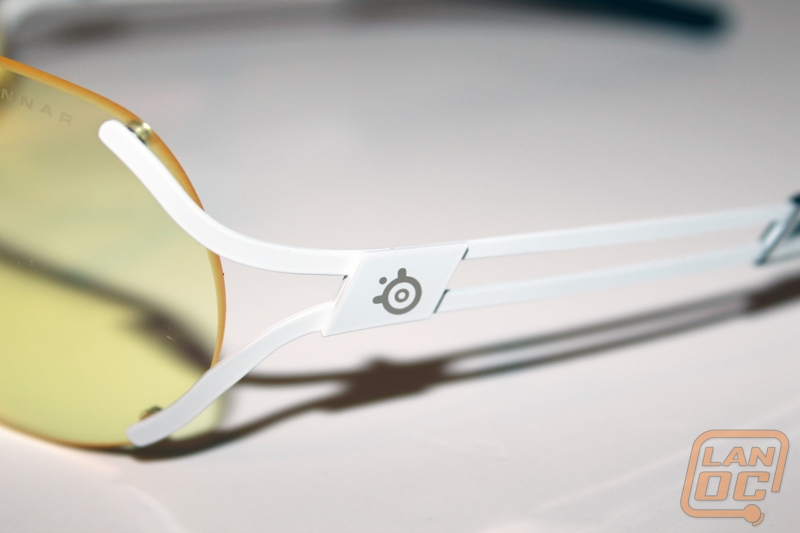 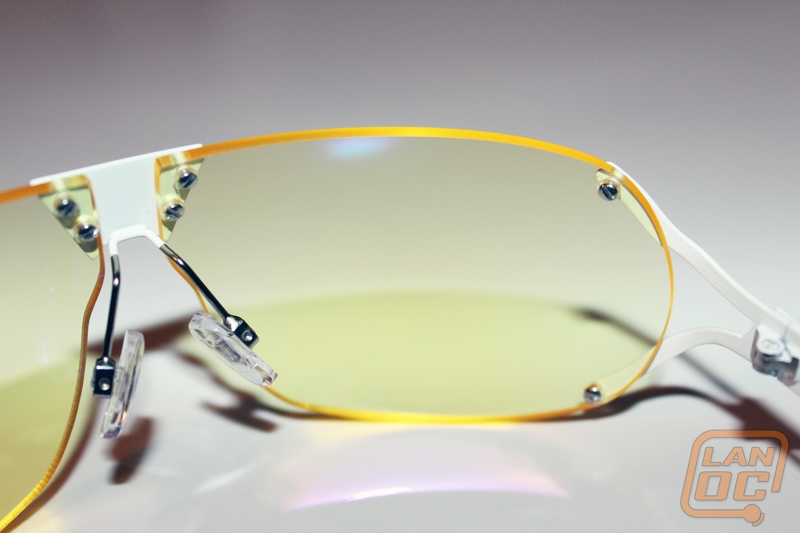 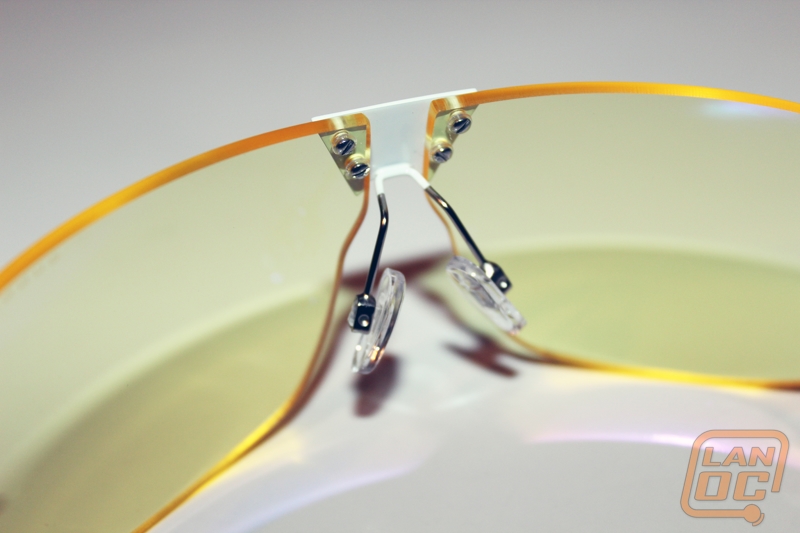 For anything that you are going to wear for extended periods of time like you will the Desmo, it’s very important that they be very comfortable. This is sometimes a problem when you have a headset on, they tend to push on glasses if they are too thick. SteelSeries and Gunner worked together to make the temples as thin as possible. They still did coat them in a plastic so you don’t have the metal digging into you. I would have liked to see this be coated in something a little more flexible, but it wasn’t noticeable at all while wearing them. Considering my fat head I have been impressed that the Desmo’s never felt too tight or small. With my headphones on I didn’t feel any extra pressure with the Desmo’s on, something that I was worried about going in. 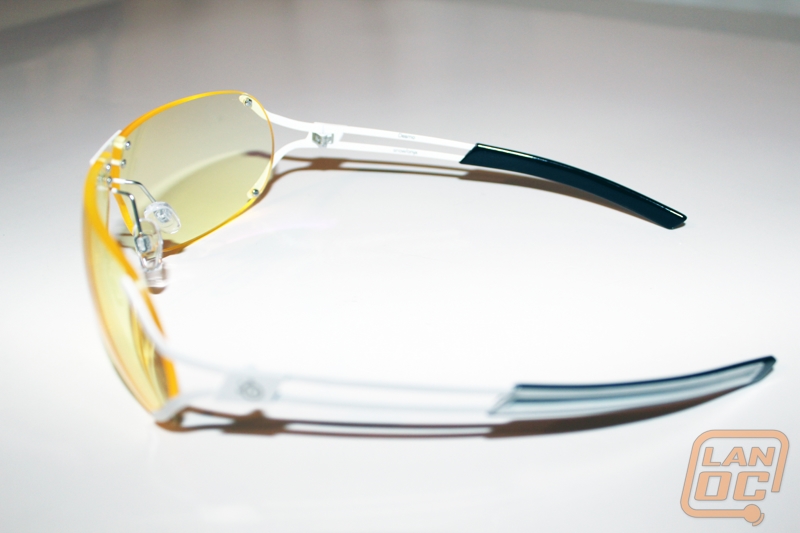 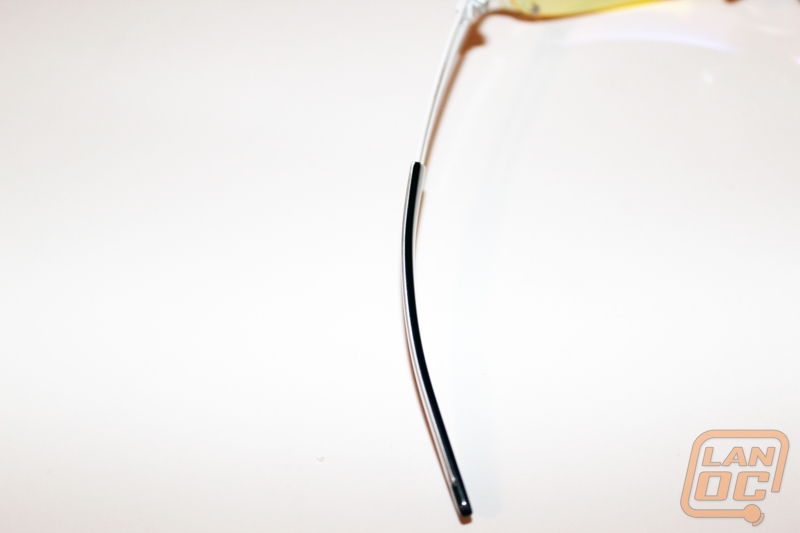 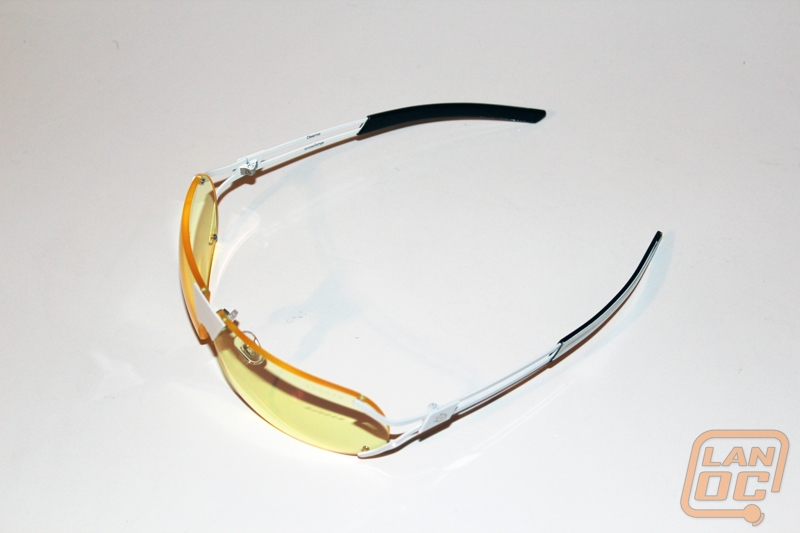 So we have established that the SteelSeries Desmo’s are comfortable while gaming and give your eyes a little relief. The question you have to ask yourself with the glasses is, are they worth the $99 price tag? For me the relief on my eyes alone is worth the cost. Working on a PC all day long takes a toll fairly quickly on your eyes. But at almost $100 bucks there is still a good chance they are priced out of range for a lot of the gamers that they are marketed towards. But for those who can afford them, you are going to end up with a set of glasses that will be a major relief to your eyes while still being comfortable with your gaming headset on. The only thing you have to pick from there is what color style you would like. We took a look at the white version, but I found the large white bridge to be a little too much. I would recommend the darker Onyx and Orange pair. Not just because we love orange here at LanOC, but also because the dark color looks much better on the Desmo’s. 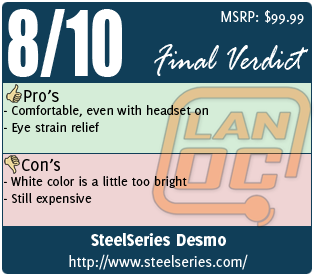 You might call him obsessed or just a hardcore geek. Wes's obsession with gaming hardware and gadgets isn't anything new, he could be found taking things apart even as a child. When not poking around in PC's he can be found playing League of Legends, Awesomenauts, or Civilization 5 or watching a wide variety of TV shows and Movies. A car guy at heart, the same things that draw him into tweaking cars apply when building good looking fast computers. If you are interested in writing for Wes here at LanOC you can reach out to him directly using our contact form.
Discuss this article
Log in to comment
Posts in discussion: SteelSeries Desmo

garfi3ld wrote: Adam I think you have tried these but your welcome to borrow them for a few days if you want to try them

Oh, I thought those were the Scope. Now I'm sad.

I may still take that offer though.