The latest version of Apple’s Mac OS X operating system shipped earlier this week. Among Apple fan boys, like myself, it is referred to as Lion, but is also known as 10.7. It has launched to mixed reviews; some people seem to really enjoy it, while others seem to believe that it is a step backwards in OS development. Some people have even gone as far to say that this version of the operating system is the Apple equivalent of Vista. Those are some harsh words.

Article by: Chad Kirchner
I am admitted drinker of the Steve Jobs magic Kool-Aid. I am CompTIA A+ certified and an Apple Certified Support Professional. I presently work in technology retail sales. I am a fan of all things technology and wish to bring my insight, perspective, and analysis to the world of technology. You can visit me on the web (under construction) at https://www.chadkirchner.com or follow me on Twitter @chadkirchner. 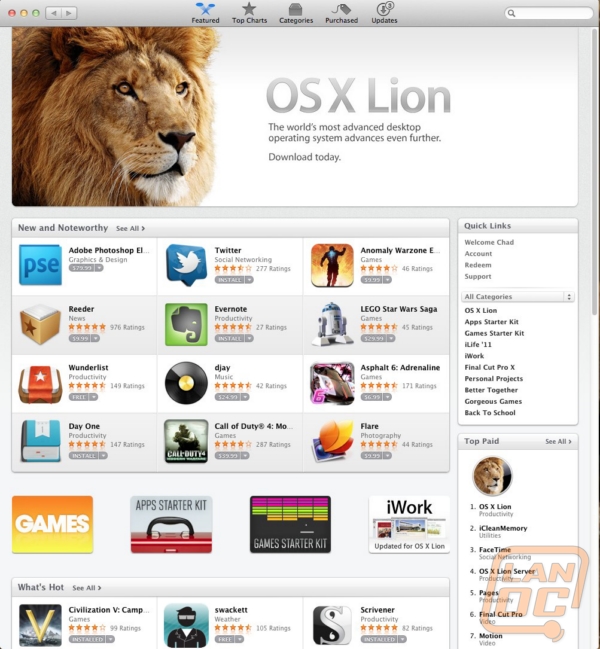 When you purchase an app in the Mac App Store, you can immediately download it. There are no product keys to keep track of, because Apple keeps track of the licensing for you. You can install the software as many times as you would like, across as many computers as you would like (as long as they are all linked to your Apple ID), and the Mac App Store program also makes sure your software is up-to-date. If you ever have to reformat your hard disk drive, reinstalling software is a breeze. Just access the Purchased tab at the top and you are on your way to reinstalling every piece of software you own with a single click.

Many Mac users have wildly adopted the Mac App Store, and developers enjoy the ease of distributing their software (even if Apple claims their 30% commission). I do very well see Microsoft doing something like this in the future, because everyone seems to benefit. One of the many complaints about Apple is their closed ecosystem, but from the average consumer’s perspective, a closed ecosystem does generate a better user experience, which should put us enthusiasts on notice for the way things are going.

Discuss this article
Log in to comment
Posts in discussion: Mac OSX Lion and Why a PC Owner Should Care

L0rdG1gabyt3 replied the topic: #16856 22 Jul 2011 21:09
That was a pretty good preview/review of OSX. I have been using a Mac at home as a secondary computer since the beginning of the year, and as soon as I heard that Lion was going to be more iOS like, I determined right there that I was NOT going to upgrade my system.

While I do believe that your desktop OS and your mobile OS should be extremely compatible, I do not believe they should be the same. I understand that touch capabilities are becoming even more prominent in everyday consumer devices, but to put an OS that is touch centric on a standard style device is a huge mistake in my opinion. I believe that MS is also making the mistake with Windows 8.

I currently have a WP7 and I really love it. The styling, the flow, the ease of use are all there and make it easy to just pick up and operate. It works good on a touch screen, but when you get to the desktop or laptop, I can see it becoming a huge mess.

This is my soapbox that I have been standing on for quite a while now, and I don't think I'm coming down anytime soon. If Windows 8 and beyond are tiled and touch based, then I will be like all the XP hold overs and keep my Windows 7 beyond the EoS. If Apple wants to slowly convert their flagship desktop OS into iOS let them do it, but I'm sure this move will begin to alienate professionals who really want to get some work done. Same goes with MS.

Deb0 replied the topic: #16861 22 Jul 2011 21:50
I'll say the review is an entertaining and enlightening to say the least if only for it being one of this "first looks" at the future that may be coming down the pipes. However, for all that interesting stuff it starts to scare me a bit. Sure a 30$ price tag looks nice but you cannot believe something like "30% commission" will not evolve into something resembling "30% additional cost" to every App you buy. It sounds cynical but to believe a company will forgo profits on a specific platform is a bit too fantasy world for me to swallow. There is a very real point where the actual cost of your OS could potentially eclipse the cost of the system it is on. The thought of micro-transactions already turns me off to certain games and to see it evolving and embedding itself into the very OS horrifies me.

drpain replied the topic: #16864 23 Jul 2011 00:37
Been on Lion since Dev Preview 1 and although you can see some iPadifications of the OS it actually runs a lot better. I have Golden Master by being a part of the Dev site and it is a 4GB installer which is pretty light.

Another thing is that Java is no longer being done by Apple and Orcale is taking over the JRE so right there is a step in the right direction on getting things fixed.

Now if only we can get Adobe to fix their problems with Hardware Acceleration on Flash for 10.7 then I think it will be smooth sailing.

chadkirchner replied the topic: #16870 23 Jul 2011 01:35
The Adobe issue does not surprise me. I completely understand why Apple "poo poos" Flash on iOS devices. Sure it's annoying at best and frustrating at worst, it does create a pretty consistent experience.

I do not believe that app developers would increase the price 30% to make more profits. It seems that developers in the app store are making more sales than they would without it, so there's no need for them to raise the prices (other than pure greed).

Interestingly, I use CrashPlan for all of my backups and when I launched that program it reminded me that Java was not included in Lion. A quick download fixed that.

The nice thing is the iOS things haven't really been in my way, but I'm not using the trackpad. I may purchase one though on my iMac and try it to see what I think.

Leonresevil2 replied the topic: #16922 23 Jul 2011 18:54
I am anticipating Steam getting pushed off Mac if they continue to integrate Mac and iPad. Apple likes to be the main distributor, and doesn't really allow storefront apps.
That really shows that Windows is THE place for digital game distribution. I could see Steam, Impulse, Origin, and all the others pushing for Windows to keep it's current system to allow programs of all kinds. That freedom for developers is what made Windows so strong of a platform, since programs could be any style, any language.
Apple is aiming for computer appliances, nice little things that look good and move fast, but don't offer versatility and options. But there is a large segment of computer users that want options and different designs. Look at how much Linux variety there is, with such a small userbase.
Apple reminds of Nintendo, making hardware and controlling software, and making themselves look like desirable products to the average consumer.
Read More...