Before we packed up for CES this year I had the pleasure/luck of talking with Verizon about reviewing a few of their current and upcoming products. With CES now over I couldn't help but jump at the chance to try out the MiFi. With a whole group of us traveling around Vegas the MiFi would be perfect for helping us get the most current updates posted for everyone to read. Now that we are back to work catching up with all of our reviews, I finally have a chance to talk about my experience with it.

Cellular modems are nothing new. In rural areas like the one I live in you find a surprising amount of people who find them to be their best/only option. Over the past two years they have become increasingly small, but even the smallest cellular modem still needs to be plugged into your PC. Not only does that limit you to one computer to share the connection, it also means you need to have drivers and software installed. When Novatel introduced the MiFi they changed the entire game. Not only is the MiFi portable (the size of 8 credit cards stacked on themselves), it also creates a wireless "cloud" around it letting you connect up to five devices too it at a time. Simply, the MiFi is a wireless router and cellular modem put together into a single package that fits right in your shirt pocket. Take a look, it's amazingly small but capable ofbig things. 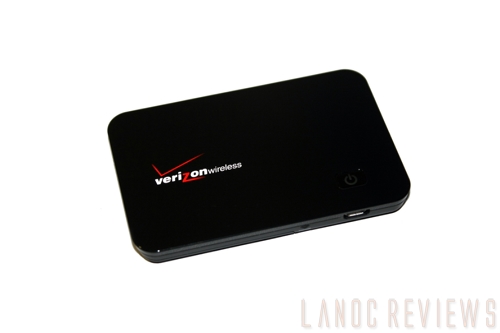 The MiFi includes a mini USB port that can be used to charge the device using the included power adapter or USB cable. That same port when paired with the USB cable lets the MiFi function just like a traditional cellular modem, just in case you don't want to share the connection over wireless. The only other thing you will see on the MiFi is a small power button on top that lights up green when its on. This lighted power icon will also be your only warning sign that the built in battery is going dead unless you plug in and connect to the integrated control panel. Beyond the power and USB cables you can also expect to find a small pouch to keep your MiFi safe over the life of your two year contract, trust me after two years of caring this thing around you will be thankful it came with the case! 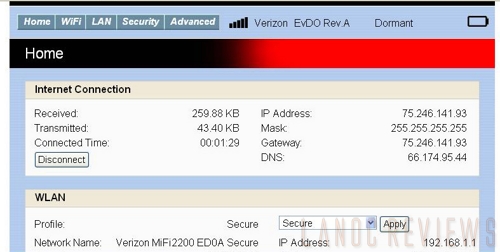 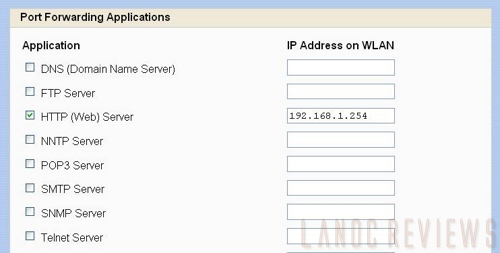 As you can see above, the integrated control panel gives you full view control of anything you might need. You have the ability to set it up as an open or secured network or even a temporary wireless hotspot. They do have a rudimentary port forwarding setup that is limited to basic ports. You won’t be able to open up ports for any specific games or torrents (not that you would want to be torrenting with finite bandwidth ) 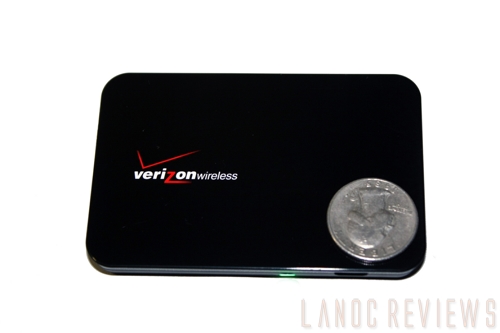 As I said before during our trip we ended up all over the place spending a lot of time in Vegas with thousands of other geeks slamming the cell networks (so much so, that iPhones were down for almost two days at one point). Using speedtest.net to the closest server I ran tests in different locations. The idea being that this would give the best idea of real world performance rather than doing a best case scenario test. Here are my results. 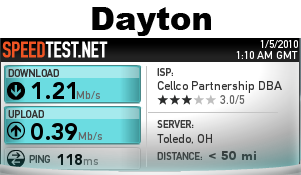 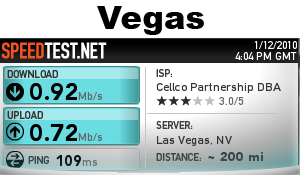 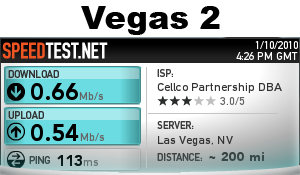 As you can see, the performance I experienced wasn’t anything to write home about. The thing to keep in mind is that this performance is what I experienced anywhere I was, not just near your modem. I could and did jump online anywhere from on the bus to the inside of a Wal-Mart. I did have some problems with the MiFi’s connection locking up when we loaded up multiple computers on it, but after talking with multiple other MiFi owners and Verizon I am sure this was due to our review sample being abused for some time by other press. The only other issue I experienced, as you can see from my testing, is a ping that isn’t really ideal for low latency gaming. This was a major issue when Adam and I had Modern Warfare 2 withdraws about a day after leaving the house. Of course for most people the ping is more than enough for games like WoW and it's online contemporaries

Verizon has two plans with the MiFi and all of its broadband enabled modems, Express Cards, and netbooks.

The 250MB plan is worthless unless you will only need to use your net a few days out of the month, and for just under forty dollars, I am willing to bet that you're going to want to use it more than that. Of course, the 5 GB plan is a MUCH better deal. 5 GB is more than enough for two or three average people to browse the internet including playing data hungry games on Facebook. Of course with a 5GB monthly allowance you will have to think twice about any heavy bandwidth usage, specifically services like Hulu.com and Steam. If left unchecked you could run into a nice charge with each extra MB costing a nickel (just over $51 for single gig).

It's rare that I get truly excited about a product coming in anymore, when the MiFi showed up I could hardly contain myself. I had to set it up right away and try it out. Even after having it for over a month I get that excitement when I realize that I can jump online anywhere and anytime I want. That kind of freedom is worth the latency issues and limited bandwidth available on the data plans. Next time you are hunting for Wi-Fi with your netbook or notebook just think about how much a portable hotspot would help you out. It will be a sad day when they force me to send this one back. 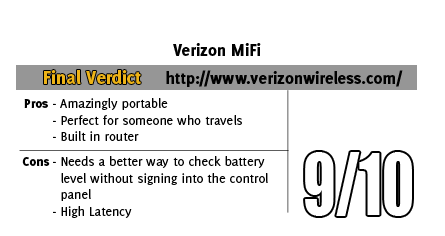 You might call him obsessed or just a hardcore geek. Wes's obsession with gaming hardware and gadgets isn't anything new, he could be found taking things apart even as a child. When not poking around in PC's he can be found playing League of Legends, Awesomenauts, or Civilization 5 or watching a wide variety of TV shows and Movies. A car guy at heart, the same things that draw him into tweaking cars apply when building good looking fast computers. If you are interested in writing for Wes here at LanOC you can reach out to him directly using our contact form.
Discuss this article
Log in to comment
Posts in discussion: Verizon MiFi 2200