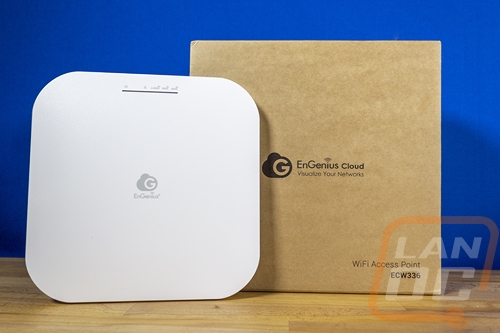 With our testing out of the way, we can step back and gather our thoughts on the new EnGenius ECW336. The ECW336 is their first Wifi 6e access point which means on top of the 2.4 GHz and 5 GHz IEEE 802.11ax support that the ECW230 had they have a third quad antenna setup and a 6 GHz radio added into the mix. To handle this the ECW336 does have a new processor from the Qualcomm Networking Pro 1210 Platform and the wired connection has been upgraded from a 2.5 Gigabit ethernet connection to a 5 Gigabit connection to handle the extra bandwidth that the ECW336 is capable of. Like the ECW230 the 336 is capable of up to 23 dBm of transmitting power, but now across the three frequencies. All of this has been packed into the same form factor as the Wifi 6 ECW230.

While the ECW336 is targeted as an enterprise device just like most of the past EnGenius products I have covered, with their EnGenius Cloud support they have made the initial setup extremely easy and continued support easy as well by bringing all of your control together in one place which can be accessed using an app or through the web browser at the office and when out of the office. The ECW336 is also easy to physically install with two different mounting clips or wall hanging slots built in as well. The mounting clips make drop ceiling installation in seconds easy while also leaving the option to screw mount if needed.

EnGenius gives you support for up to 8 different SSIDs which can help you sort your network out using VLANs, to have different levels of security or open networks for public areas, or even to split up ITOT devices and people. My only complaint there is that while it has been proven not to help security, I like being able to hide some networks and you currently can’t do that while also allowing 6 GHz on an SSID which was a bummer. The ECW336 doesn’t run hot, but I should point out that it does run at least warm. If mounting correctly this shouldn’t be a problem, however. Performance wise 6 GHz expanded already solid performance but more importantly with WiFi 6 and 6e capabilities of handling lots of devices have been improved.

For pricing, the EnGenius ECW336 does have that enterprise pricing as well with it available at $699. Those of you hoping to get a good deal to be able to put it to use as a power user, that is most likely going to be priced well above what you are looking to spend. EnGenius has recently announced a product lineup focused more on that target audience, so hopefully, we can check that out at some point as well. But right now the ECW336 is a welcome addition to our network which has been rock solid at least on all of the EnGenius hardware, our Dell PoE switch for our cameras can be questionable at times. 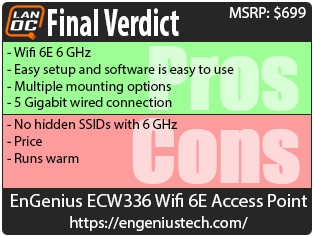 You might call him obsessed or just a hardcore geek. Wes's obsession with gaming hardware and gadgets isn't anything new, he could be found taking things apart even as a child. When not poking around in PC's he can be found playing League of Legends, Awesomenauts, or Civilization 5 or watching a wide variety of TV shows and Movies. A car guy at heart, the same things that draw him into tweaking cars apply when building good looking fast computers. If you are interested in writing for Wes here at LanOC you can reach out to him directly using our contact form.
Discuss this article
Log in to comment
Posts in discussion: EnGenius ECW336 Wifi 6E Access Point

We have 1668 guests and no members online