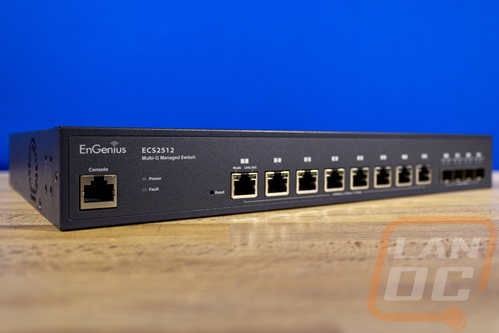 When I originally took a look at the ECS2512FP two years ago one of the downsides that I noted was at the time 2.5Gbps and 10Gbps weren’t available in a lot of end devices at the time. But in the last two years, the Intel I225-V NICs have been being used a lot more and with WiFi6 and WiFi 6e, even some access points have been moving up to 2.5G. Not to mention on higher-end boards 10Gbps is often now an option as well. With that businesses and home offices especially the homes of tech enthusiasts who may need the improved bandwidth are going to be needing to upgrade. Some ISP options are now offering over 1Gbps connections and frankly, storage speeds with NVMe SSDs have grown so far past 1Gbps networking that it’s crazy. We have SSDs that are capable of 6000 MB/s read speeds but with 1Gbps you only get 125 MB/s. With the ECS2512 you have eight 2.5 Gbps ports and you also have the four SFP+ ports which can be tied into servers or can get a direct 10Gbps pipe into important PCs as well.

The ECS2512 performed exactly how I would expect in our testing as well. But for me what stands out the most is how easy the ECS2512 is to work with when tied into the EnGenius Cloud. I will admit that I have worked hard to move a lot of services back to our network and away from the cloud. Everyone wants to get into the monthly subscription somehow for one but when it comes to security I prefer to keep important data off of other people's servers and on ours. So it seems a little weird that I like EnGenius Cloud, but it makes network configuration and setup simple. You can add devices by scanning QR codes and once you have things set up adding in additional APs and switches require no digging into settings pages. I also like that I can keep track of things all in one place.

Now if you were hoping to run the ECS2512 in your office, I will say that with its active cooling it is going to stand out in a quiet location. It isn’t as loud as the ECS2512FP, but it isn’t quiet. In a closet or server rack, it won't be an issue though. For pricing, the ECS2512 is selling for $499 which is $150 less than the ECS2512FP which is the same setup only with PoE. Even so for me, that is still expensive. But this is designed for enterprise use and it is priced to match that. 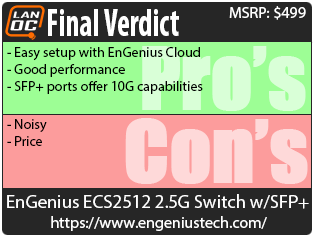 You might call him obsessed or just a hardcore geek. Wes's obsession with gaming hardware and gadgets isn't anything new, he could be found taking things apart even as a child. When not poking around in PC's he can be found playing League of Legends, Awesomenauts, or Civilization 5 or watching a wide variety of TV shows and Movies. A car guy at heart, the same things that draw him into tweaking cars apply when building good looking fast computers. If you are interested in writing for Wes here at LanOC you can reach out to him directly using our contact form.
Discuss this article
Log in to comment
Posts in discussion: EnGenius ECS2512 2.5G Switch

We have 1251 guests and one member online