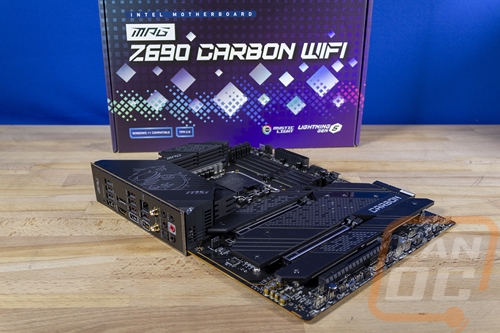 MSI hit the ground running with the Z690 launch with a wide variety of options that cater to just about every type of build you might be considering. The MPG Z690 Carbon WiFi is focused on gaming, just like the MPG brand would indicate, but I love that MSI has toned down the typical “gaming” themed features. They have a blacked out design with large heatsinks for the VRM and the entire PCIe area but they don’t have crazy colors, reflective materials, or anything else that is too flashy. There is a little bit of the fake carbon fiber, but much less than order Carbon boards. Even with the RGB lighting things are a little toned down though I will say that nearly all of the backlit features are just lighting up the branding like the MSI dragon and the Carbon name, I would have liked it more if they had more basic RGB accents and less billboards.

As for features, MSI went crazy in the areas that you need it. The rear I/O is packed full of USB ports with a lot of USB 3.2 Gen 2 ports as well as one Gen 2x2 as well. Inside on the board for headers, there are two USB 2.0 headers and one each of the new and old USB 3.2 headers so USB shouldn’t be a problem. The same goes for M.2 space, the Carbon WiFi has 5 different M.2 slots which is a little crazy but should leave a lot of room for expansion in the future along with the normal SATA ports as well. For network connections, the board does have an Intel 6e WiFi onboard as the motherboard name would imply and you also get an Intel 2.5G NIC though I wouldn’t have minded also seeing a 10G NIC as well given the price range of this board.

The other area that I was really digging is that MSI has stepped things up when it comes to the accessories and swag that they include with the board. The software comes on a nice MSI branded USB drive, you get an MSI screwdriver, and even an MSI keyboard duster. None of those are expensive, but when you are spending this much on PC hardware I do like that it feels like you are getting hooked up a little bit.

I mentioned the pricing, the Z690 Carbon Wi-Fi has an MSRP of $399.99 which isn’t the most expensive Z690 board by a long shot. MSI alone has a few that are higher-end including another Z690 Carbon that comes with an EK waterblock. But I do have to just mention overall that the pricing for these boards is starting to get a little crazy. Six months ago for example the Z590 Carbon Wi-Fi was $349 and the Z490 Carbon launched at $269.99 in April of 2020. This isn’t specifically on MSI at all, but with board prices going up more and more and DDR5 availability issues really making those crazy as well it makes it hard to justify new builds as a whole, or at least I would be more likely to go with a board like the MSI Z690 Tomahawk where the money saved would also pay for a DDR4 memory kit to go with it. 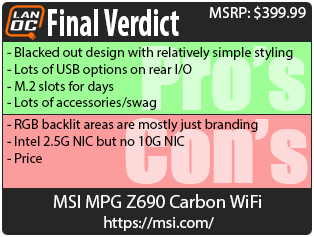 You might call him obsessed or just a hardcore geek. Wes's obsession with gaming hardware and gadgets isn't anything new, he could be found taking things apart even as a child. When not poking around in PC's he can be found playing League of Legends, Awesomenauts, or Civilization 5 or watching a wide variety of TV shows and Movies. A car guy at heart, the same things that draw him into tweaking cars apply when building good looking fast computers. If you are interested in writing for Wes here at LanOC you can reach out to him directly using our contact form.
Discuss this article
Log in to comment
Posts in discussion: MSI MPG Z690 Carbon WiFi

We have 1009 guests and no members online