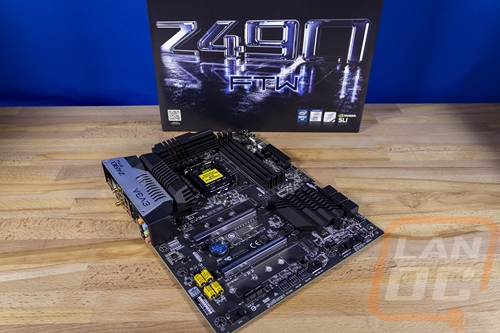 For testing, I have been saying for years that motherboard benchmarks don’t hold much weight because you are still using the same CPU, memory, and GPU and those are what play big roles in how fast your PC is. But I do run a few tests just to make sure everything is running the way it should and it also lets us see what the system can do. In this case, everything was running well. In fact, in the short time between testing the three original Z490 boards and the Z490 FTW performance in Ghost Recon jumped up. But everything else was still in line.

My focus was on the network performance because that is where you can sometimes see more variation and that is the case here. All of the other Z490 boards came with 2.5G NICs with one also having a 10G but EVGA only went with the Intel i219V NIC which is a 1G. The performance was on par with the others in my test on a 1G network. But on a 10G network that wasn’t still the case. All four boards have the same Intel AX201 wireless NIC but they all have different wireless performance. I was really curious here because EVGA decided to go with the direct antennas, not one on a cable to sit up on your desk or away from your PC. The performance ended up being better than the Asus and Gigabyte boards and just a little behind the MSI.

I also took a look a look at the VRM’s when testing. For this I used the AIDA64 FPU stress test to heat things up for 30 minutes then I took our Flir images. What I was looking for here was to see how well the cooling was working. Which you can see in the pictures that the cooling was 50 degrees cooler than right at the PCB. This was a lot warmer than the other Z490 boards in general which I think is partially because the VRM heatsinks were designed to have more airflow at the CPU socket but we are using an AIO cooler. 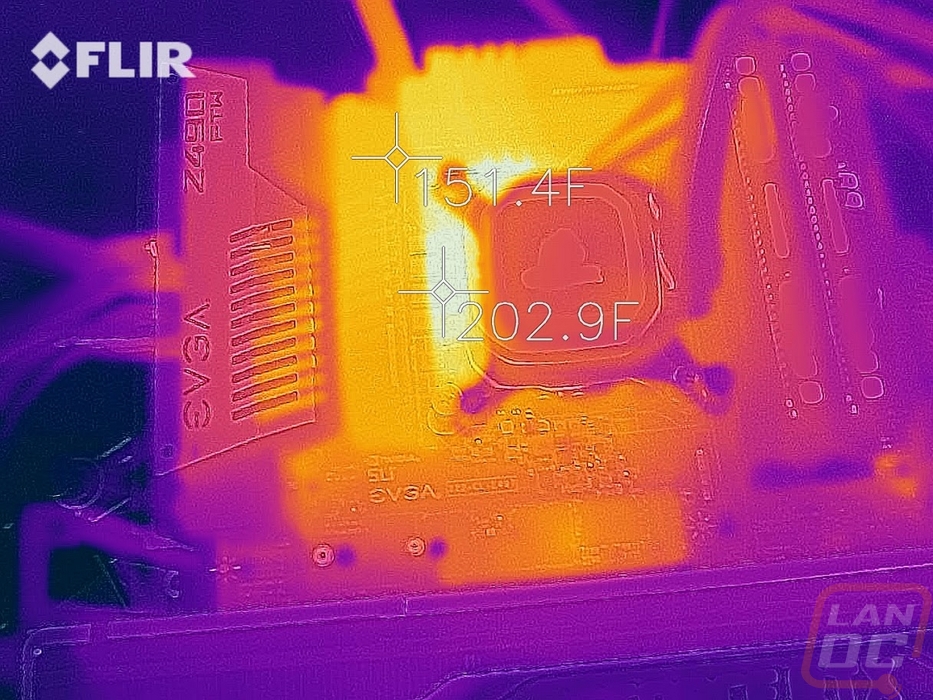 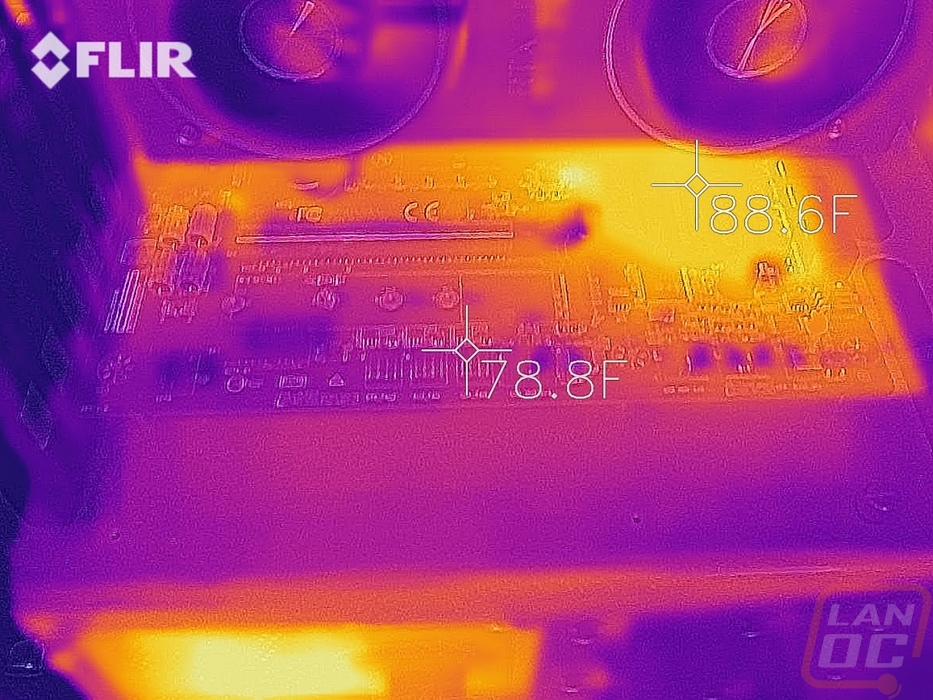 I also always take a look at board lighting. Normally this wouldn’t even exist with other EVGA boards but the Z490 FTW shocking does have some RGB lighting. They included a glow around the chipset heatsink. I also included a picture of the power button and the dual diagnostic LED readouts as well up in the top right corner. EVGA’s lighting is still significantly less than any other comparable board. I’m really surprised that they would go against their normal all blacked out look only for just a touch of lighting. 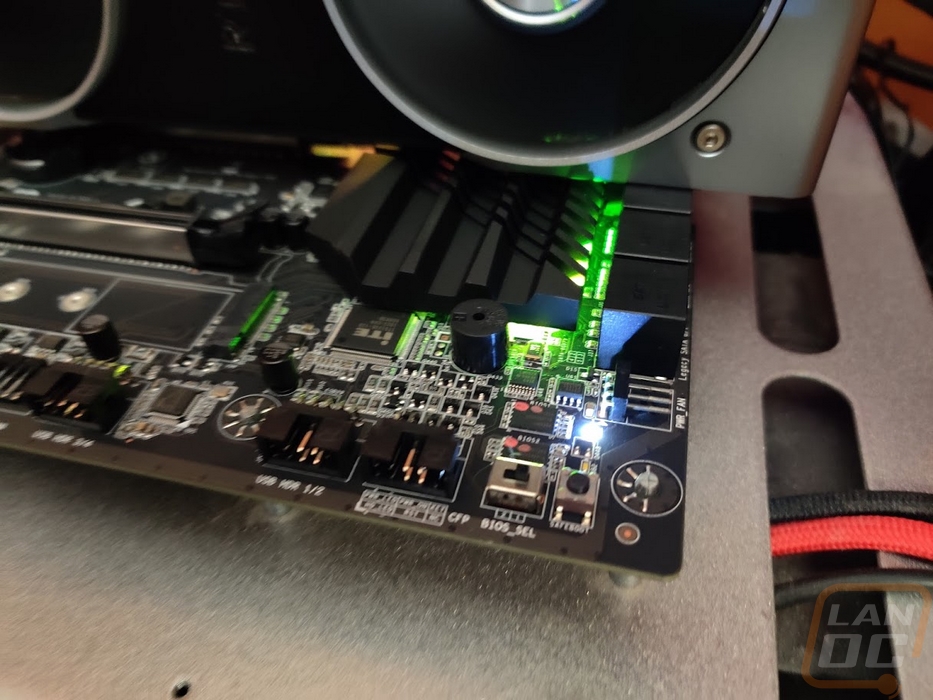 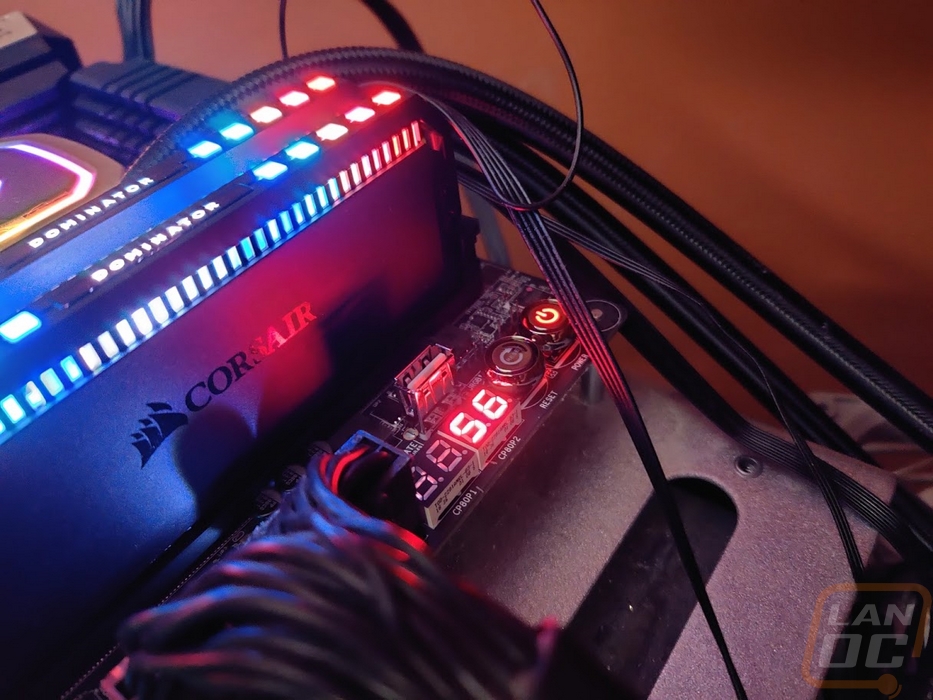