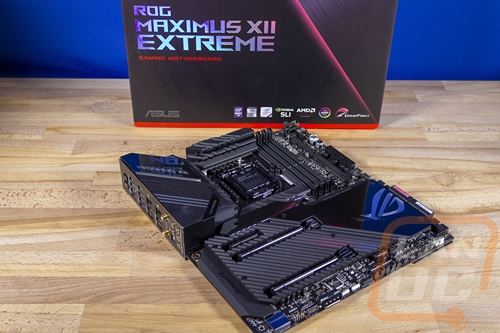 The ROG Maximus XII Extreme comes in a big a heavy box, but beyond that, the box has the same styling that all of the ROG boards have. This includes the flat black background with glossy lines in it and the brushed finish in the top right section. The model name is the largest font used on the front and they also used a holographic reflective material for it as well so it stands out on the dark background. Asus and ROG branding is in the corners and down along the bottom of the front you have the required badges from Intel that indicate this is a Z490 board and what CPUs are supported, Nvidia and AMD branding for SLI and Crossfire and then Asus includes an Aura Sync logo as well as Gamefirst which is a feature as well. The only thing I will say is that not having Z490 in the name or somewhere more visible than Intel’s small icon could make things a little confusing for anyone shopping in person. But I like the look overall, though having a picture of the board would still always be nicer IMO. 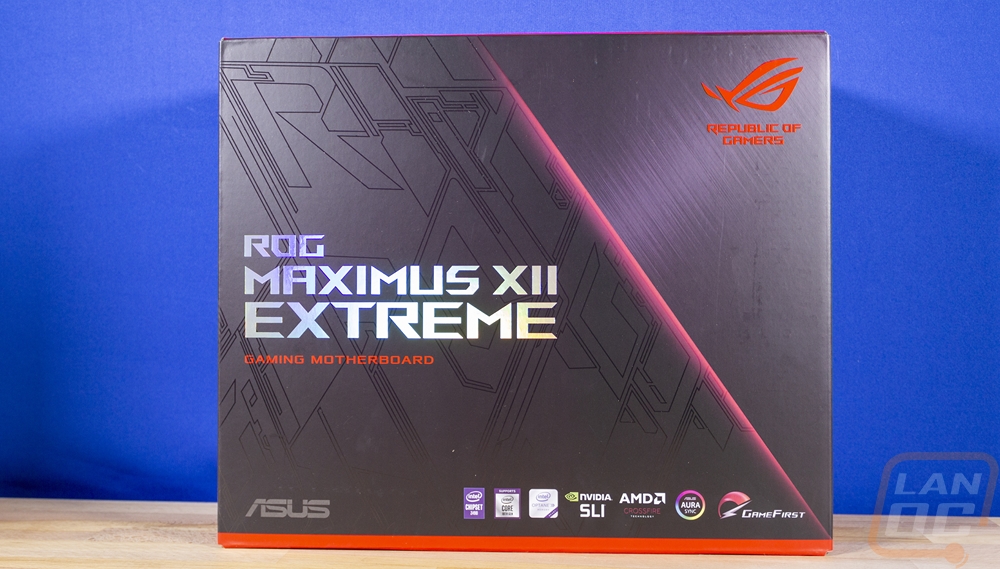 Asus does include a picture of the board on the back. In fact, the main picture is two pictures so it can show the entire top of the board as the rear I/O. On both sides of that, they have a specification listing basically that lists features and has the board dimensions which is important. Up along the top, they also take a few of the key features and include pictures to go along with them. 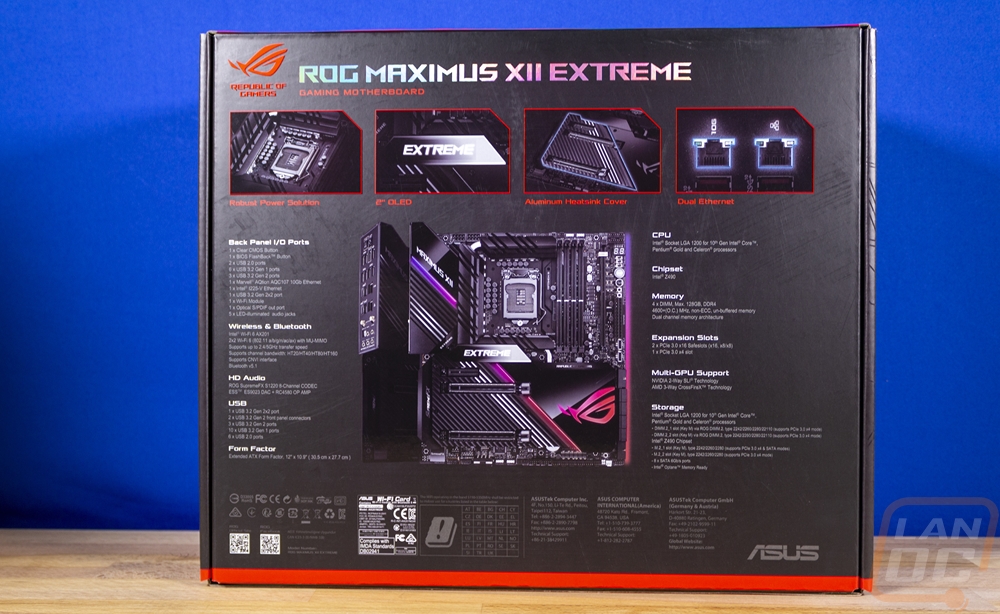 The box flips open with ROG branding on a display on the underside of the top and a clear plastic tray that sits on top of the board holding it in place but letting you see it as soon as you open up the box. There isn’t a static protective bag or anything in the way. The board then sits in a cardboard tray which when you lift up all of the documentation and accessories are tucked away in multiple smaller compartments with lids on them. 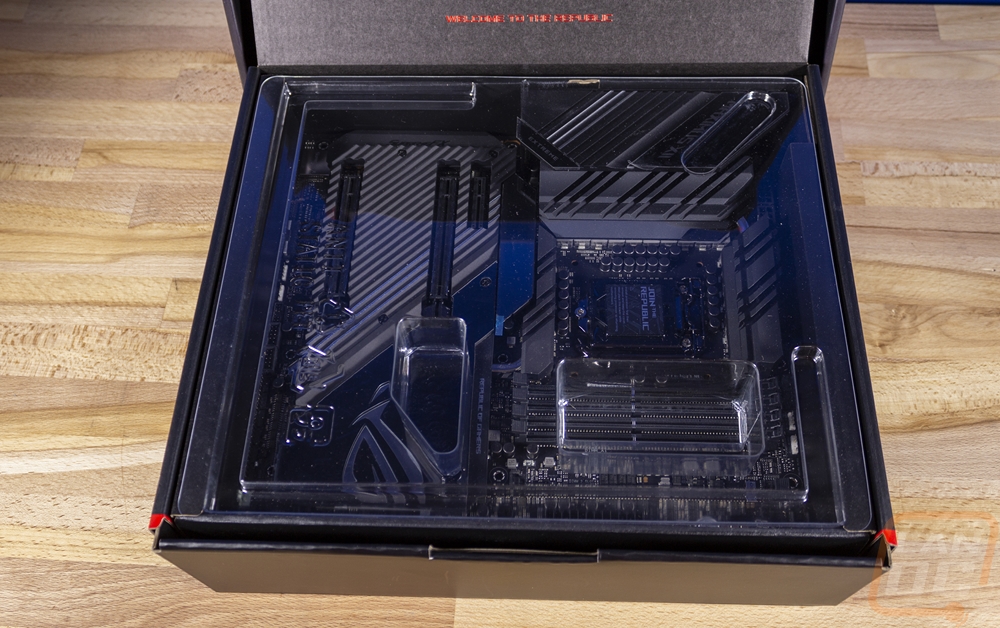 All of the documentation for the Maximus XII Extreme came all packed up in its own envelope which has a small thank you on the inside. You get a user manual of course and because the board comes with a thunderboltex 3 expansion card they also include a user guide for that as well. The same goes for the Fan Extension Card II, only it is an installation guide and it is much smaller. Beyond that, you also get a sticker set which has color-coded cable labels and a bunch of ROG stickers. 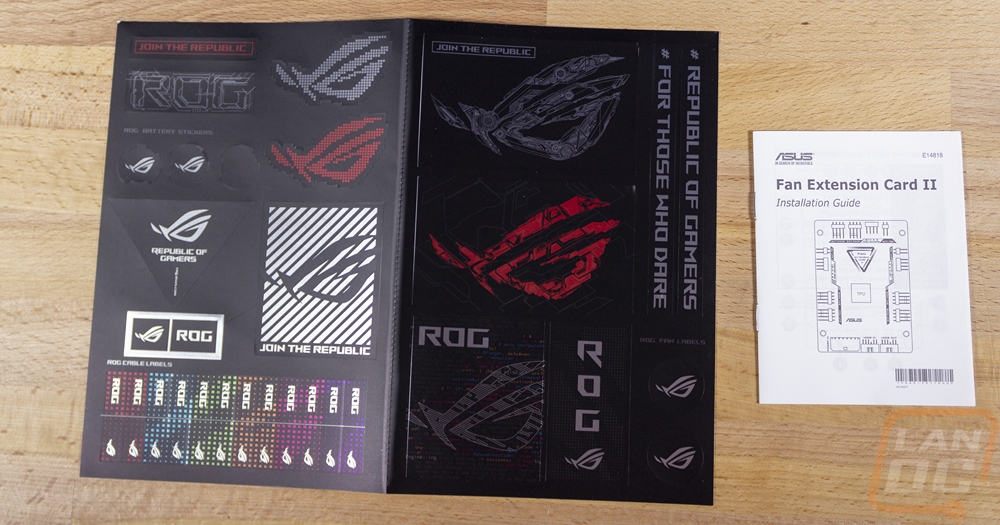 Diving into the accessories included with the Maximus XII Extreme is crazy. This is one of the things about expensive motherboards, especially from Asus. In addition to features on the board itself, you get a LOT of stuff to go with it and it isn’t all just screws and cables. Through there is a lot of that. This first badge has all of the screws for the M.2 drives, printable accessory mounting screws, and screws for things like fan mounts. But you also get a front panel helper adapter to make hooking that up easier and rather than include a DVD for software and drivers ROG uses a cool ROG USB drive for their high-end boards like this. You get an ROG logo metal case badge and they even included an ROG keychain which while not worth a lot, is a cool piece of swag that most people can put to use. 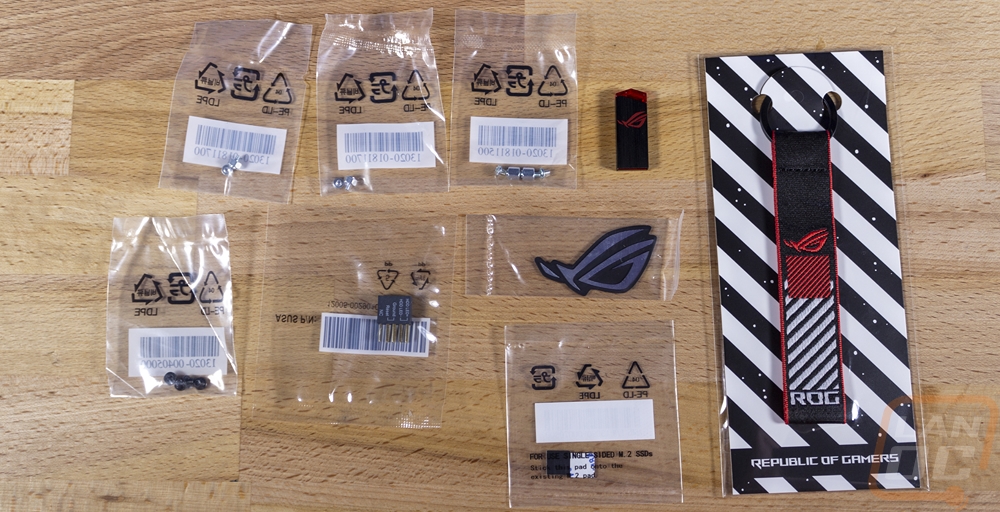 Starting off with the biggest of the accessories that Asus included. The Maximus XII Extreme comes with a Thunderbolt add-in PCIe device. Specifically, it is the ThunderboltEX 3-TR which is different than the normal ThunderboltEX 3 that Asus sells independently. For one this is a taller card. It also really good looking with the metal shield over the top and a backplate on the back of the PCB which are both flat black and have gloss black accents. Their other card doesn’t require power where this one has a six-pin power plug on the end, just like a video card. The ThunderboltEX 3-TR has a few more ports as well. You get two Type-C connections and then two Mini DisplayPorts which add to the Maximus XII Extremes already good I/O. The original ThunderboltEX 3 sells for $70 and this is a significantly better card so it is adding a lot of value to the Maximus XII Extreme. 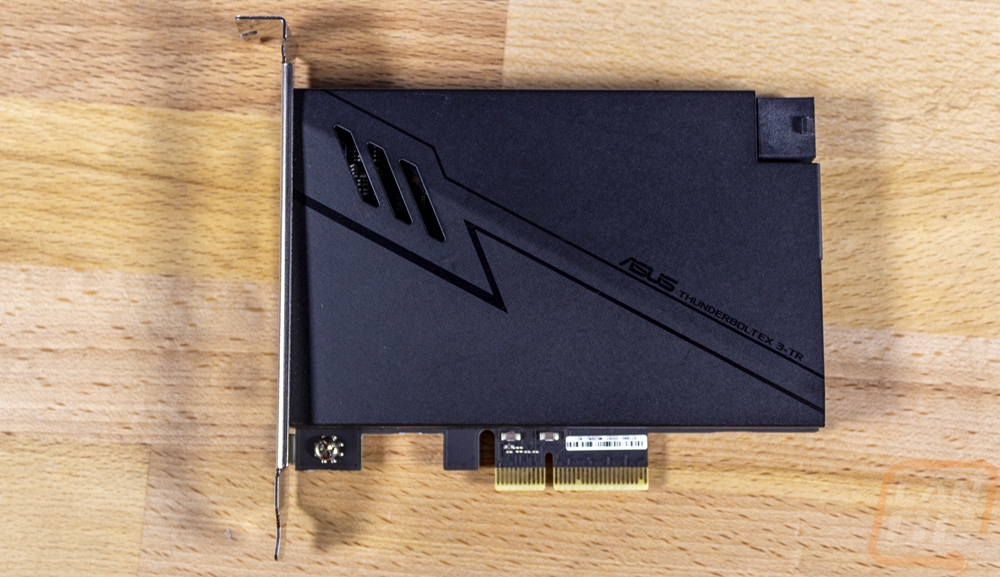 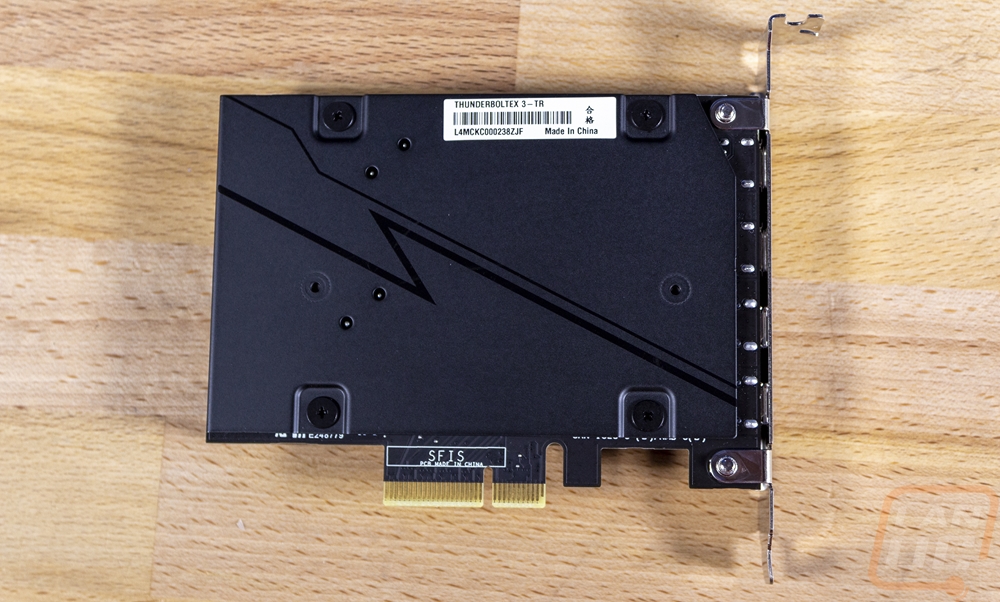 That isn’t the only expansion card included with the Maximus XII Extreme, Asus also includes of their fan extension card II’s which I’ve seen on previous high-end models like their Threadripper board and X299 boards but I’ve never seen one with what would be considered a mainstream board. Then again there normally aren’t THIS high end of boards for the mainstream chipsets. The fan extension card has a power connection that uses an adapter cable for a 6 pin PCI power. Next to that are a node in and nose out ports, this is what hooked the card up to your motherboard, and with the out also available you can still hook up other Asus node devices. Then you get three sections of hookups. In total, you get six PWM fan headers which from the name you can tell is the main reason for the expansion card. Asus still goes above that with three four-pin RGB connections which are the white headers. Then three thermal sensor headers for external temperature probes. For really crazy builds, this doubles up and more for these connections or gives you an option to keep your wiring cleaning by hiding this PCB back behind things and not have as many fan headers, RGB, and thermal probe connections all over your motherboard. 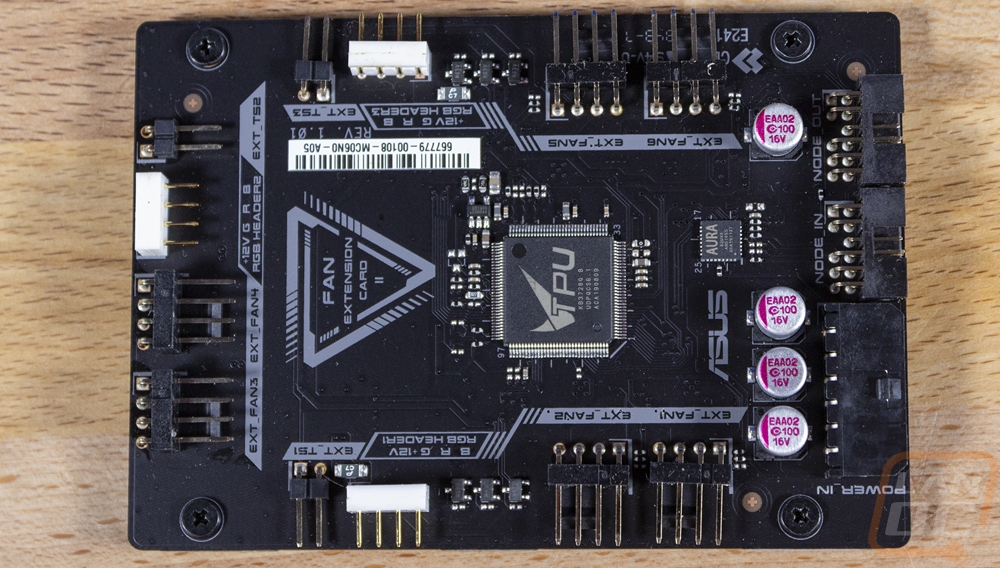 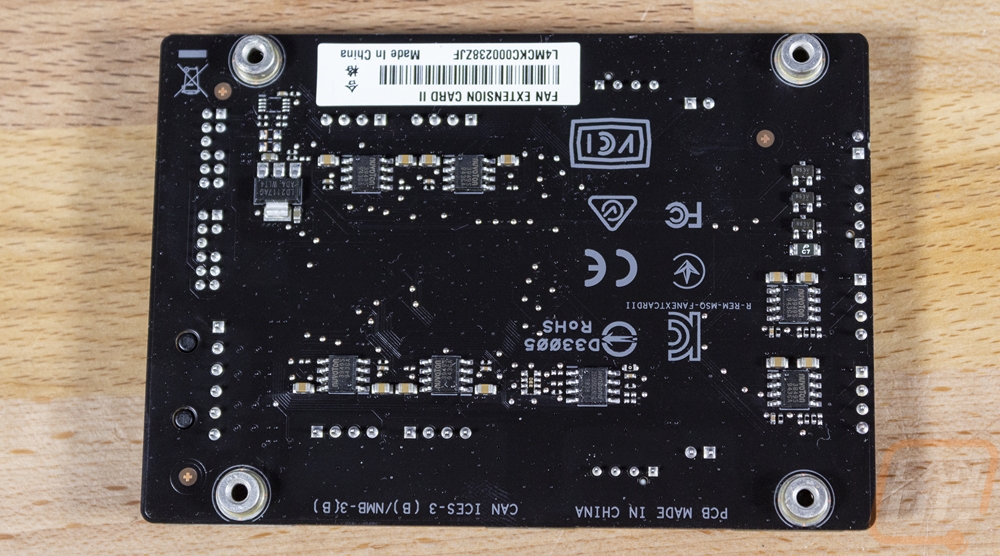 For Asus’s third and final expansion board they include one of their DIMM.2 adapters. They have used these on a lot of their boards for adding M.2 slots and in some cases, it is the only M.2 option but this specific one is a little nicer than the plain PCB cards that some of the boards come with. That is because Asus includes a heatspreader for both sizes of the card. It ends up looking like a tall stick of ram that perfectly matches the board aesthetics. This raised M.2 option is also better for cooling because it doesn’t end up trapped up under a video card and it is up into the airflow as well. 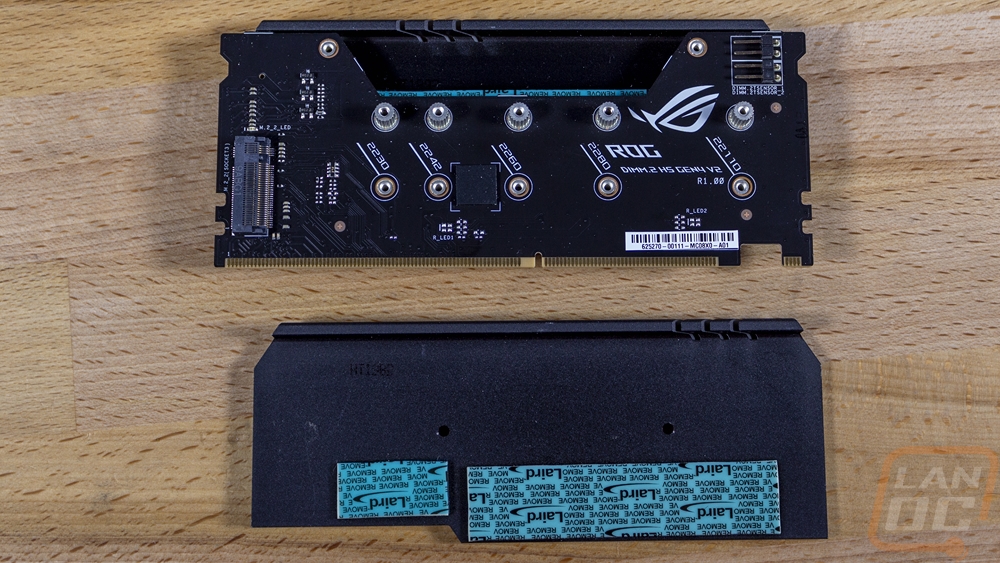 The ROG Maximus XII Extreme does come with an Intel AX201 wireless NIC which supports WiFi 6 so it does need an external antenna. Asus went with their standard antenna, there isn’t anything different for the Maximus XII Extreme. It comes in two pieces and you have to slip them together but honestly, they still are loose. There isn’t a magnet like the other Z490 boards had and the base isn’t wide so it is easy for it to fall over. 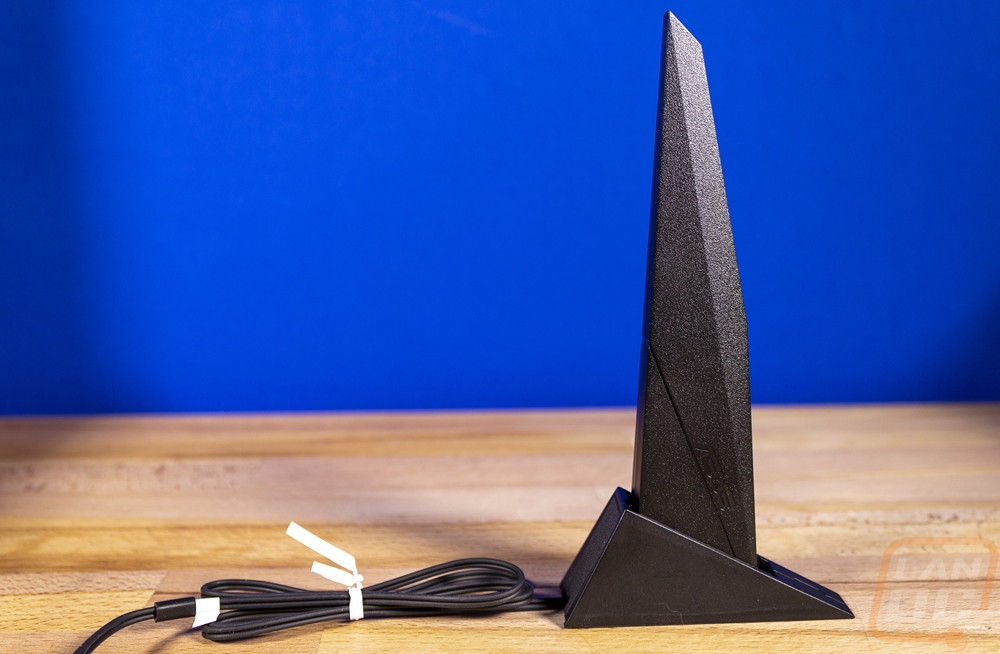 You get an additional fan and fan brackets. There is also a tube that comes with a sweet ROG screwdriver with different bits. 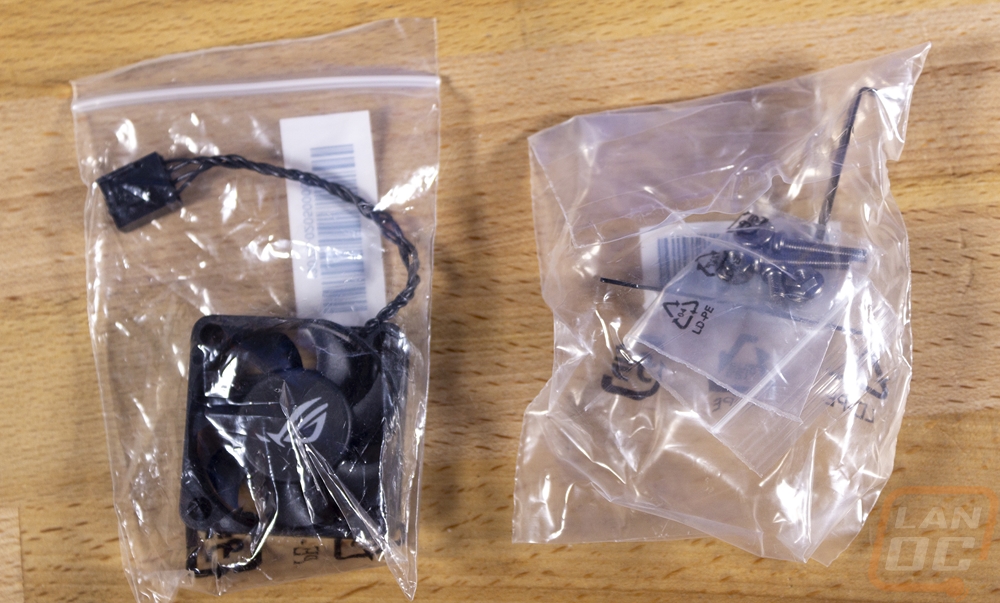 For cables. The Maximus XII Extreme comes with a lot. You get four bags with a total of eight SATA cables. But these aren’t the standard black SATA cables, they are sleeved which is a nice upgrade. There are two DisplayPort full size to mini-DisplayPort cables for the included Thunderbolt adapter. The cable next to the DP cables is the power adapter for the fan extension card II as well as the data cable next to that. The last photo has pictures of the three thermistor cables for external temperature readings as well as an extension cable for RGB strips and an extension cable for addressable LEDs. There is also a cable for the thunderbolt add-in card as well.

We have 1021 guests and one member online