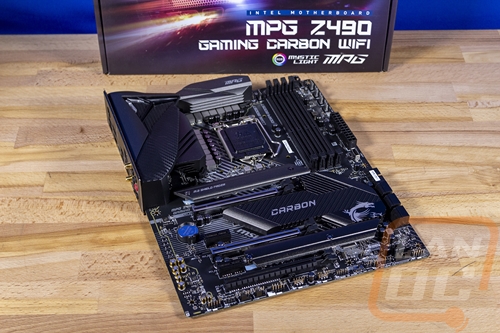 I have to admit that the carbon lineup has come a long way over the years. Early on I felt like the fake carbon fiber look was tacky and they do still include a few touches of it. But the MPG Z490 Gaming Carbon WiFi ends up being more of a simple blacked out board which offers a simpler look that some of the more expensive boards. MSI kept costs down by not adding fancy 10G network cards and stuck with a lot of what is offered from the Z490 chipset but that does still get you a 2.5G NIC, WiFi 6, and a surprisingly large number of USB 3.2 Gen 2 ports. Being more of a mid-range gaming board it also has some more premium features like the rear I/O shield which comes premounted and a large cover over the top of the rear I/O that helps with that clean look. I think my favorite feature has to be the inclusion of a USB 3.2 Gen 2x2 Type-C port which is twice as fast as a normal Gen 2 port and the only way you can run a drive like the WD Black P50 SSD. You get a good mix of internal connections including a Corsair RGB connection which is cool. I wouldn’t mind another USB 2.0 header but with a Type-C front panel option, you should be all set.

My only complains are relatively small. There isn’t a diagnostic readout screen, they did include the basic boot LEDs but it is nice to have a screen with an error code when you have a problem. As a reviewer, I would prefer to have a power button. I also really wish there were more USB ports on the rear I/O, a lot of bandwidth was used for those Gen 2 ports but you only get two USB 2.0. It is most likely because I have written it countless times now, but I also think the name could be cut down to be a little simpler.

As for pricing, the MPG Z490 Gaming Carbon WiFi comes in at $269.99 which I am considering to be mid-range with boards starting at $150 and going up to $800. At $269.99 it has the Z490 Aorus Pro AX and the ROG Stix Z490-F Gaming as direct competition. The ROG doesn’t include WiFI at that price and it has one more VRM than the Aorus but is otherwise similar in features.  MSI balances the MPG Z490 Gaming Carbon WiFi with some premium features without making it a full on high-end board which makes it a good option in the mid-range. 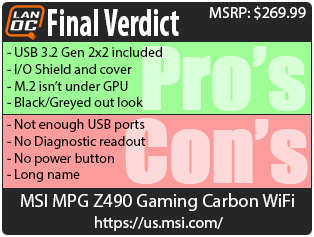 You might call him obsessed or just a hardcore geek. Wes's obsession with gaming hardware and gadgets isn't anything new, he could be found taking things apart even as a child. When not poking around in PC's he can be found playing League of Legends, Awesomenauts, or Civilization 5 or watching a wide variety of TV shows and Movies. A car guy at heart, the same things that draw him into tweaking cars apply when building good looking fast computers. If you are interested in writing for Wes here at LanOC you can reach out to him directly using our contact form.
Discuss this article
Log in to comment
Posts in discussion: MSI MPG Z490 Gaming Carbon WiFi