So the X370 Gaming 7 was a blacked-out board with orange lighting, not too much changed for the X470 but they did back away from the all blacked out look a little to bring back a little silver into the mix. The PCB is still black but on the heatsinks things aren’t as dark. With that, they also completely changed the cooling setup. The new boost clocks on the Ryzen 2000 series CPUs are part of the reason but it looks like Gigabyte went well beyond that, but I will get into that in a minute. The board comes in at 30.5cm x 24.4cm aka a full ATX form factor. This leaves room for a lot of features for us to go through so we better get to it. 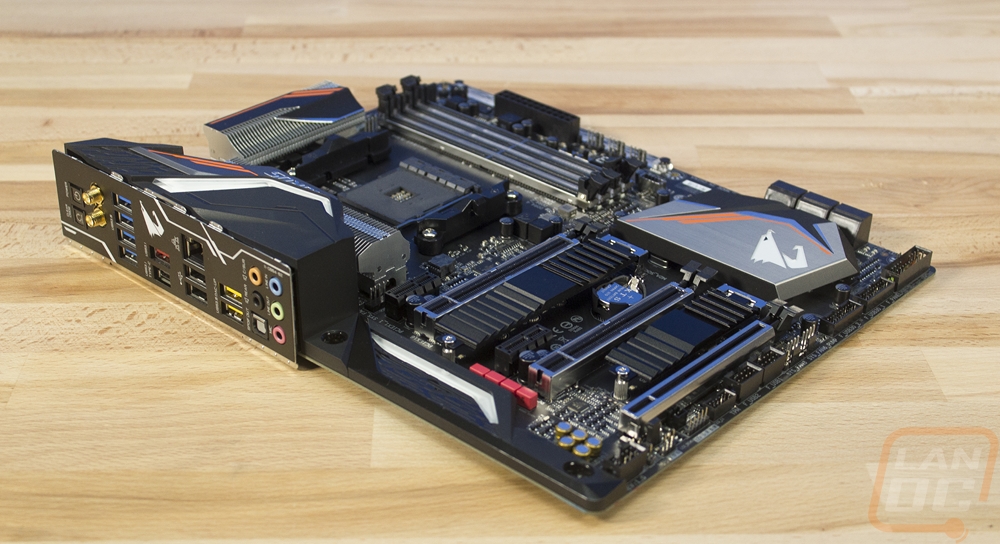 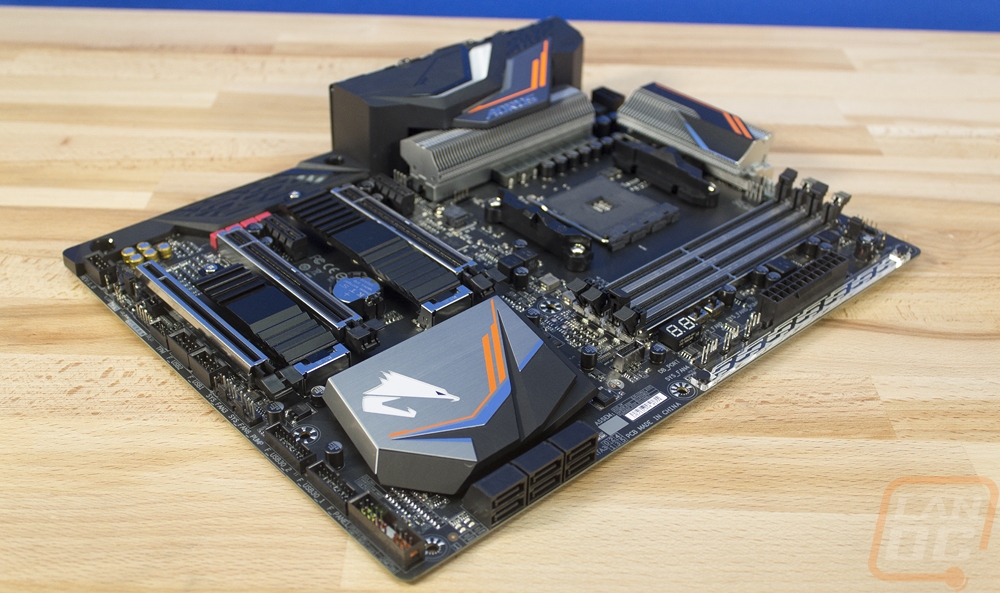 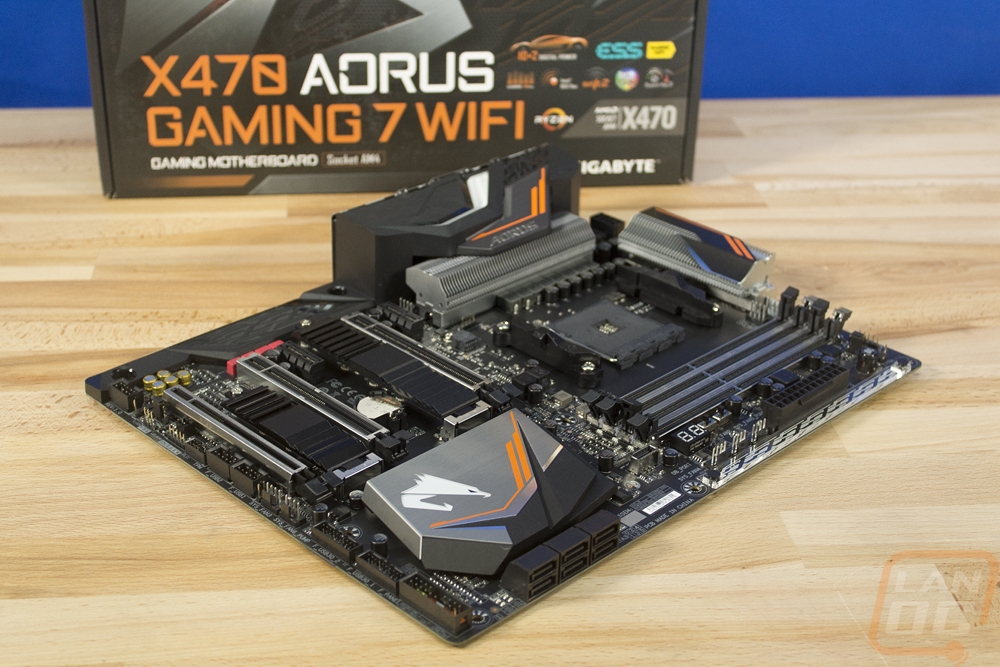 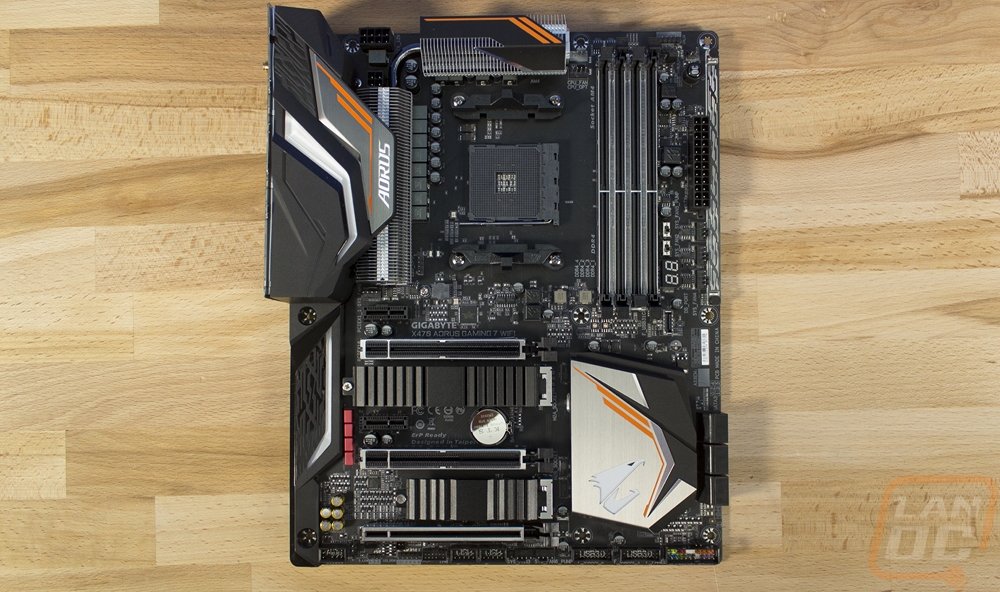 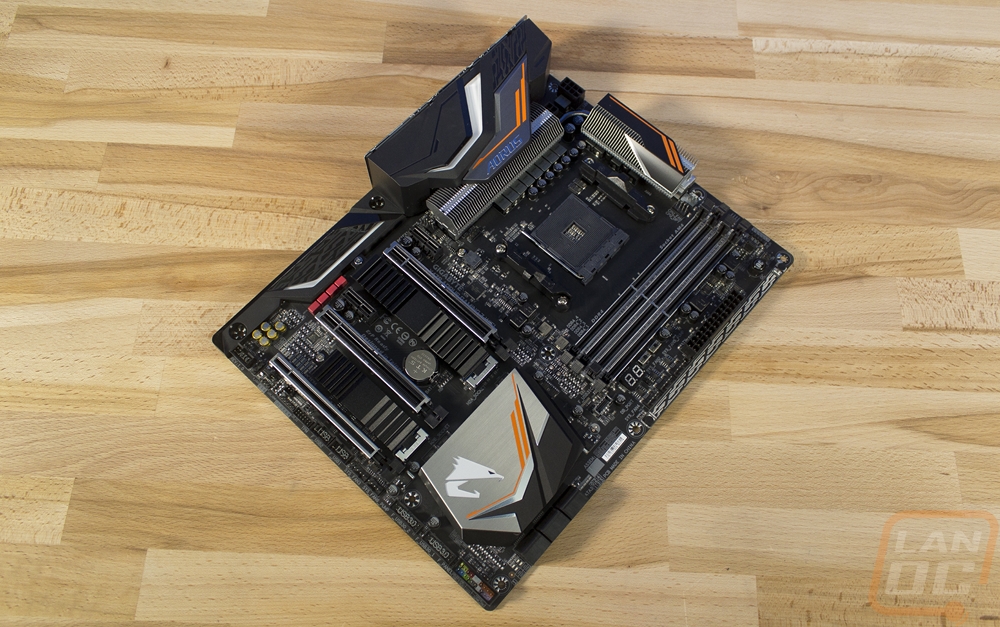 For cooling the main changes are with the VRM heatsinks to the left and to the top of the CPU socket. In an interesting move, Gigabyte moved to a fin style heatsink for these. Most boards just use cast aluminum heatsinks with a lot less surface area. This is similar to how some of the low end or stock CPU heatsinks are cast with fins where better coolers use a sheet metal fin design. The rear I/O shield contrasts the light colored heatsink and has the Aorus branding in it. It doesn’t serve any cooling function like some boards now do though. The top VRM heatsink is connected to the left one with a heatpipe and it has the same design as well only with a black orange and polished aluminum design on top. The large low profile heatsink for the chipset is a cast design. It also has an aluminum cover over it for the styling. It doesn’t use black though, for this one they use the cast heatsink for black and bring in the silver and polished finish with the cover. There is just a touch of orange and then the Aorus hawk logo is cut into the cover with RGB lighting behind it. 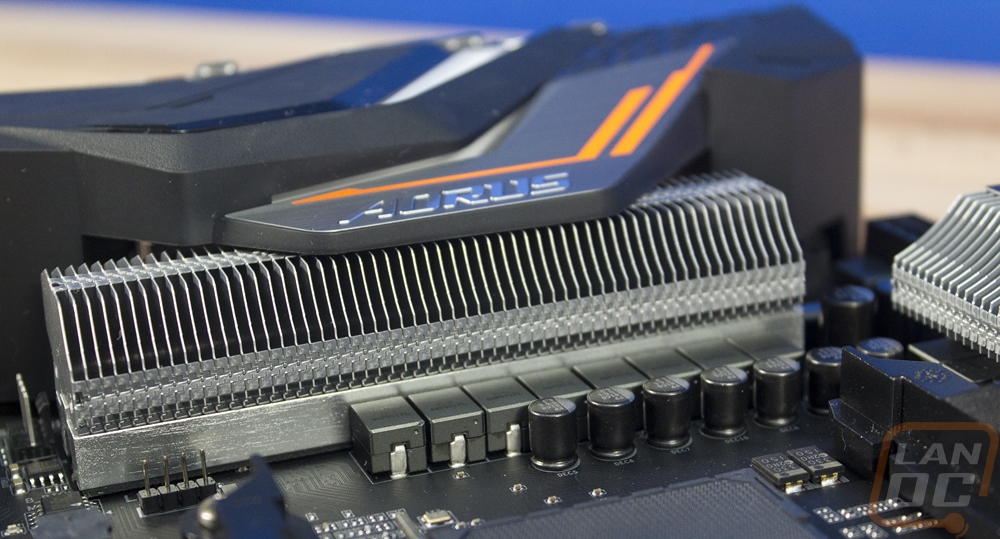 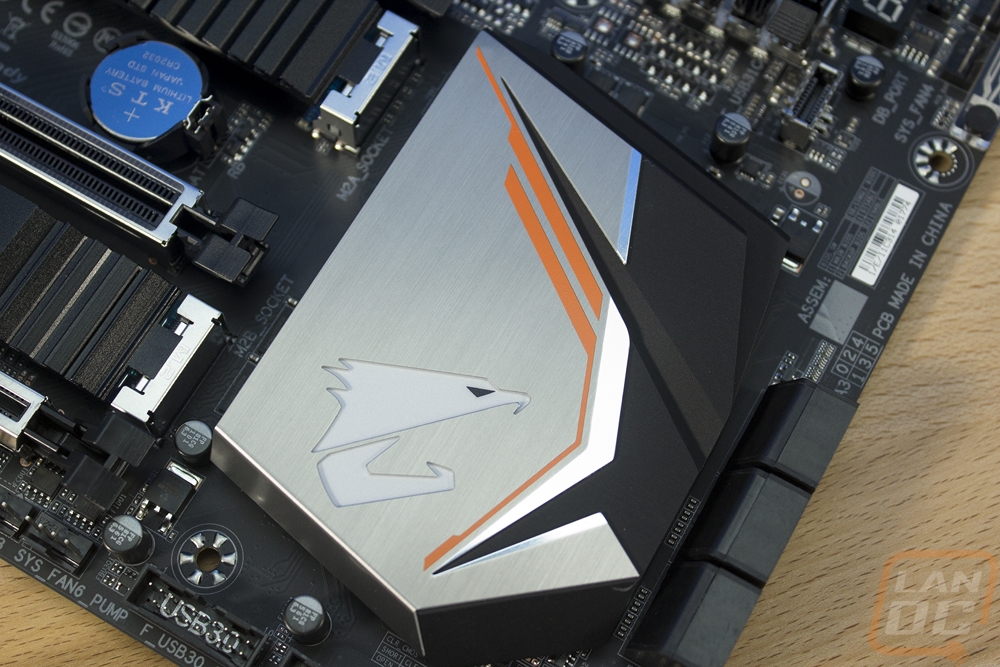 The last two heatsinks are basic black cast heatsinks for both of the M.2 drives. These aren’t too thick but do have a slight bump design to add a little surface area. They have to be low profile to keep room for PCI devices but I think they did a good job getting a little functionality out of these and they look a lot better than the U shaped heatsink on the MSI board.

Starting up in the top left corner most of the space is taken up by the rear I/O and the VRM heatsinks/CPU Socket. The rear I/O has a great looking plastic cover that really adds to the look of this board. This is actually where most of the boards styling comes from in fact. It has the grey with orange trim on it as well as the Aorus logo in chrome. Behind that is black in a mechanical shape with an RGB light strip and then there is a gloss black and flat black design up at the top. Also in this area though is an RGB header down next to the left heatsink. Then between the two VRM heatsinks Gigabyte tucked two power connections for the CPU power here. You have an 8-Pin for the main power and an additional 4-pin as well. 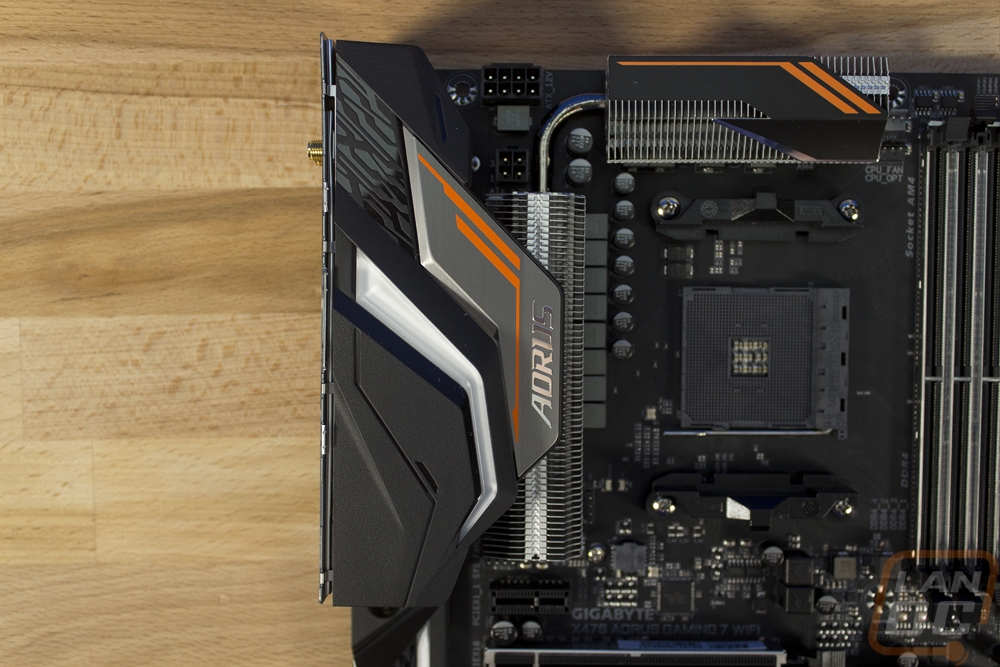 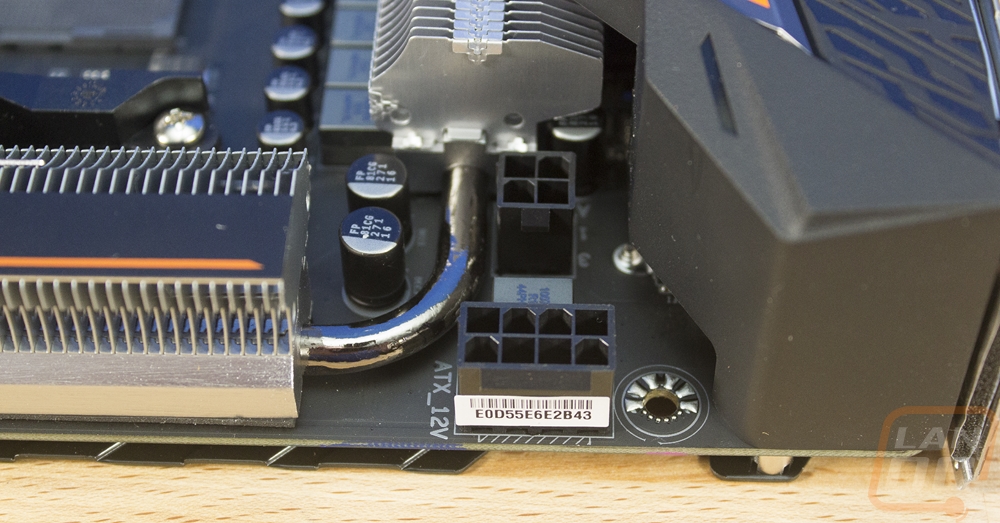 Moving over to the top right there is a lot more going on. For starters, the four DDR4 RAM DIMMs take up a lot of the space. These have metal shielding around them as well as RGB LED strips in between each DIMM to light up the memory, something that only Gigabyte does. Up top next to the heatsink there are two 4-pin PWM fan headers for your CPU fans. Down in the bottom right edge, there are three more as well, two of those are system fans and the third is for a water pump connection, that one supports a higher amperage for better pump support. Also up in the top corner, there is an RGBW header and a digital LED header. The RGBW supports adding a fourth set of lights to LED strips to allow a proper white, I’m surprised this hasn’t taken off. Speaking of RGB the etched strip along the far right edge is also lit up. Next to it is the motherboard 24-pin power. Above that is the OC button to be able to bump on automatic overclocks. Then down by those fan headers, there is a tiny two pin header for an external temperature sensor that you can put on something else in your case to track its temps. Also here is the LED diagnostic readout and two switches. The switches are for the BIOS and DualBIOS. 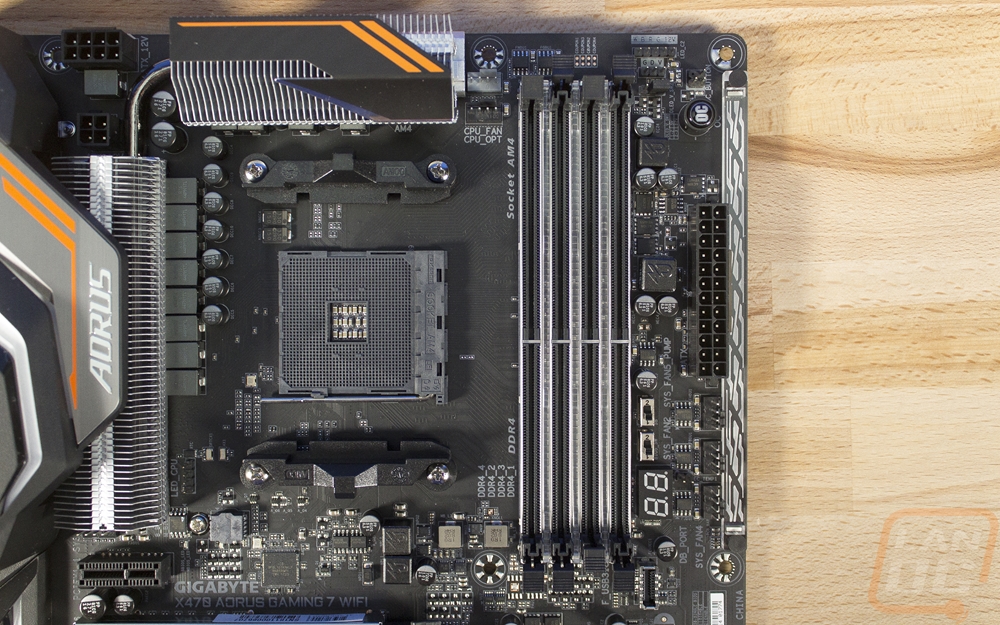 Okay down in the bottom right there are just a few things on the right edge, most everything else is down along the bottom. First, they did slip a new USB 3.1 Gen 2 connection in right near the bottom of the RAM DIMMs. Then there are six SATA ports on the right edge that are all right-angled. I like that they also put a port numbering chart next to them as well. Just below those is a four LED array with a table as well to help you diagnose booting issues if anything hangs. From there the front panel connection is in the corner. They did include the easy hookup tool but I’m just happy there are easy to see color codes down inside of the plug and a table printed on the PCB below it for easy hookup without the manual. Also right here is the clear CMOS header for easy access, even if you have video cards installed. Next to that are two USB 3.0 headers. They aren’t 3.1 like most boards, but I’ll take two of these over one 3.1 for better support for cases with four USB 3.0 front panel plugs. Next to that are two more PWM fan headers but the right one is labeled for double duty if you need an addition higher amperage plug for a second water pump. 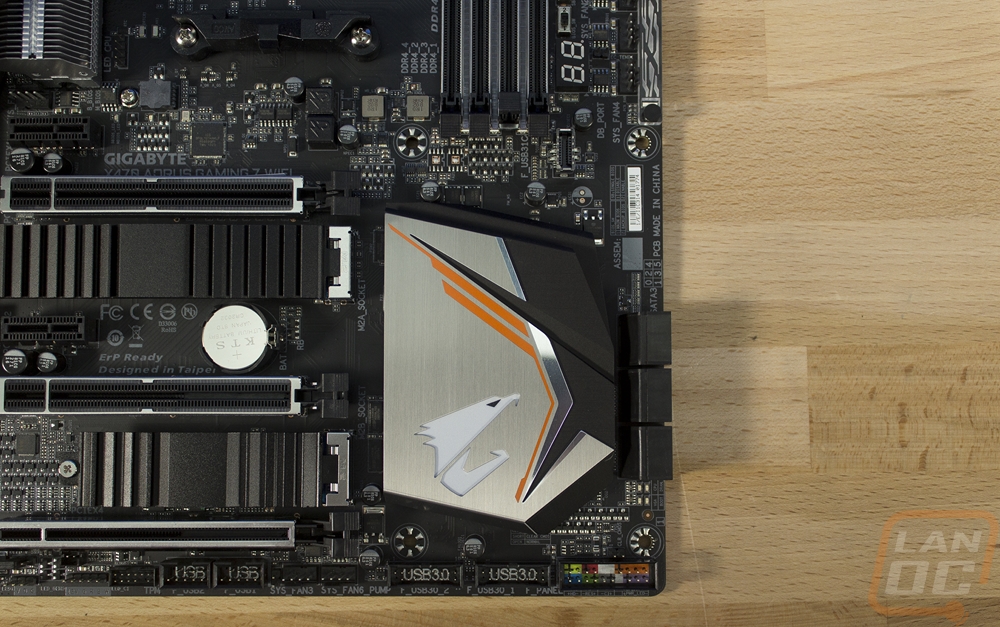 Down in the bottom left corner, the Gaming 7 has a lot going on. For starters, you have all of the PCIe slots. You get three x16 length slots and two x1 slots. With the M.2 slots, the x1 slots are accessible even with a card in the top x16 slot. So the top x16 slot is a full speed slot, the second one is x8 and the bottom is x4. All three have metal shielding around them but the top two also have LEDs built in around them just like the RAM has. Then you have two M.2 slots, both support x4 PCIe speeds, the top slot also supports SATA M.2 drives if you need it. The top slot also supports up to 22110 length M.2 devices and the bottom goes up to 2280. 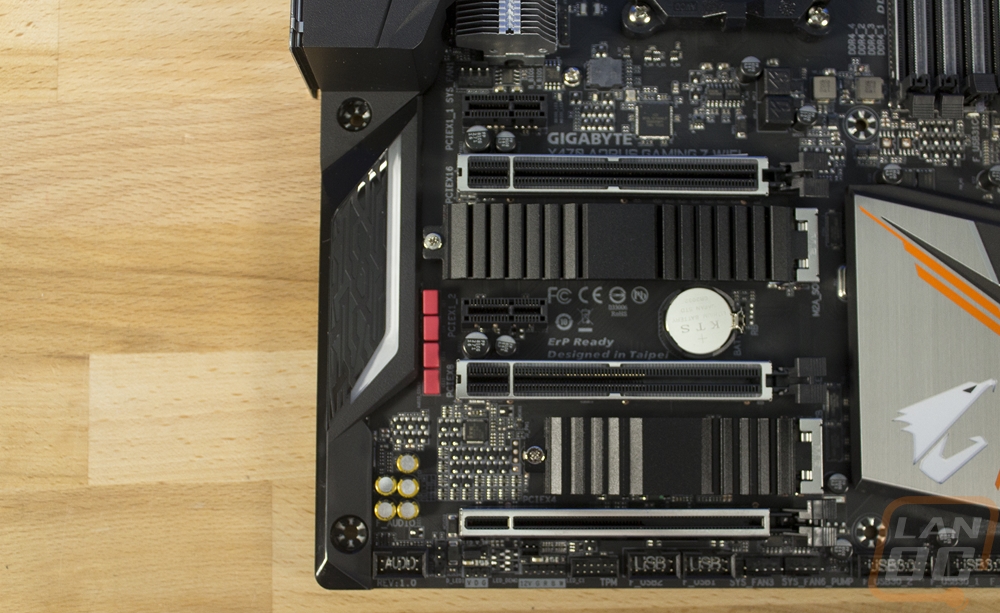 Down along the bottom, there are two USB 2 headers to go with the 3 other USB headers available. Next to those is the TPM aka trusted platform module. Then there is a second RGBW jack for RGB and RGBW lighting and a second digital LED (addressable LED) header. Then last but not least is the front panel audio connection.

So most of the audio area is covered but you can spot the Nichicon gold caps down at the bottom. The red boxes are WIMA caps as well. This is paired up with the Realtek ALC1220-VB for audio processing and an ESS SABRE reference DAC. This gets you 2/4/5.1/7.1-channel audio. There is also a smart headphone AMP that auto detects impedance for the front panel connection so you have support for any impedance headphones.

For starters with the rear I/O, can’t say it enough how much I love when boards have the cover pre-mounted. It makes installation easier and for a few cases, it’s the only way you can have the rear I/O panel at all. Mainly some of the special In-Win designs like the D-Frame. Anyhow over on the left, you actually get a power button along with a button to clear the CMOS. If you tried to use this power button often though I bet you end up resetting the BIOS a few too many times because of how close they are together. Next to that are the two WiFi antenna connections, they are also a little close together but still usable. From there we have a lot of USB options. The blue ports are all USB 3.0. The two yellow over on the right are also USB 3.0 as well but they have clean dedicated power. This is cool for hooking up a DAC or sound card obviously, but can also be used for a mouse or keyboard that you are worried might have issues with lower voltage when you hook up a lot of USB devices. The red port is USB 3.1 Gen 2 as is the Type-C connection below it. Then the two black ports are old school USB 2 giving a total of 10 ports on the rear I/O, not bad. Above those is the ethernet, this is hooked to an Intel NIC. Then over on the right is the now standard 5+optical layout for audio.

Also new with this design is they now included a partial baseplate on the bottom of the board. Asus has done this in the past with full and partial bottom plates. They don’t always offer protection beyond no damage happening prior to the install and nothing grounding out on the bottom of the board but they do have to the overall strength of a board. In this case, the shield is only from the rear I/O to the CPU socket and around the top. Basically under the I/O and the new fin heatsinks. The shield also gives the rear I/O cover something to hook too. Beyond that, the chipset cooler is attached with screws not taped on and we can see from this side that the PCB is a good looking flat black. 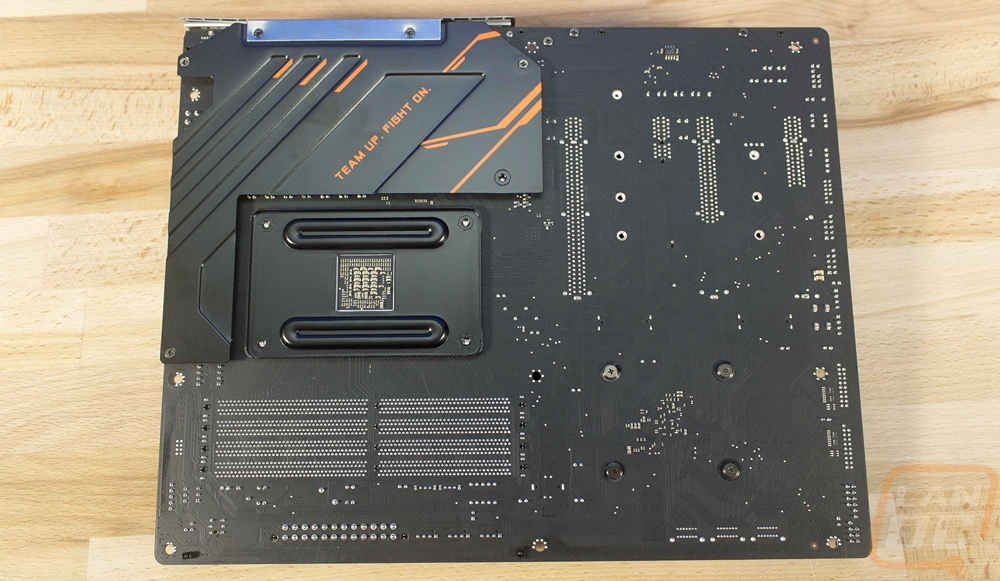 We have 1240 guests and no members online