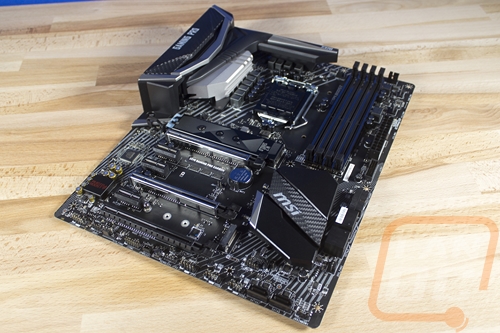 So the Z370 Gaming Pro Carbon is a full ATX  board and its black, gray, and white color scheme is similar to their Pro lineup only the design on this is a little more “aggressive”. What I mean by that is where the Pro lineup is all about a clean and simple look the Carbon has white stripes across most of the black PCB, angular heatsinks, and fake carbon fiber on the I/O shield and chipset cooler. So while you do get the color neutral design the rest of the design is a lot more flashy. Personally, the design is a little over the top for me, mostly because of the fake carbon fiber, but I am happy they didn’t go with crazy colors at least. Unless you turn them on with the RGB lighting up under the board and built into the I/O shield. 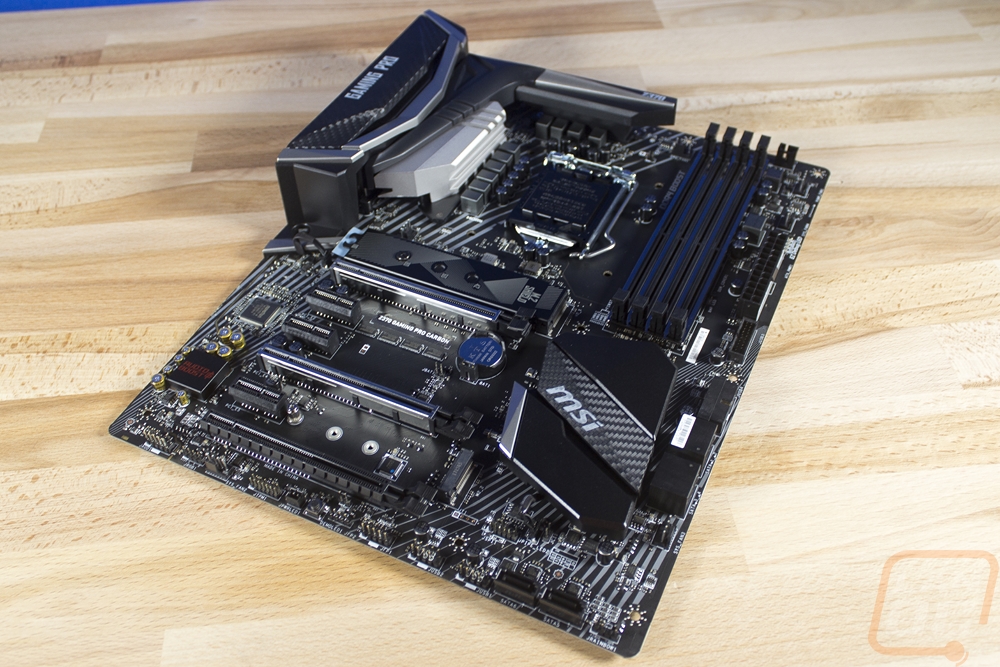 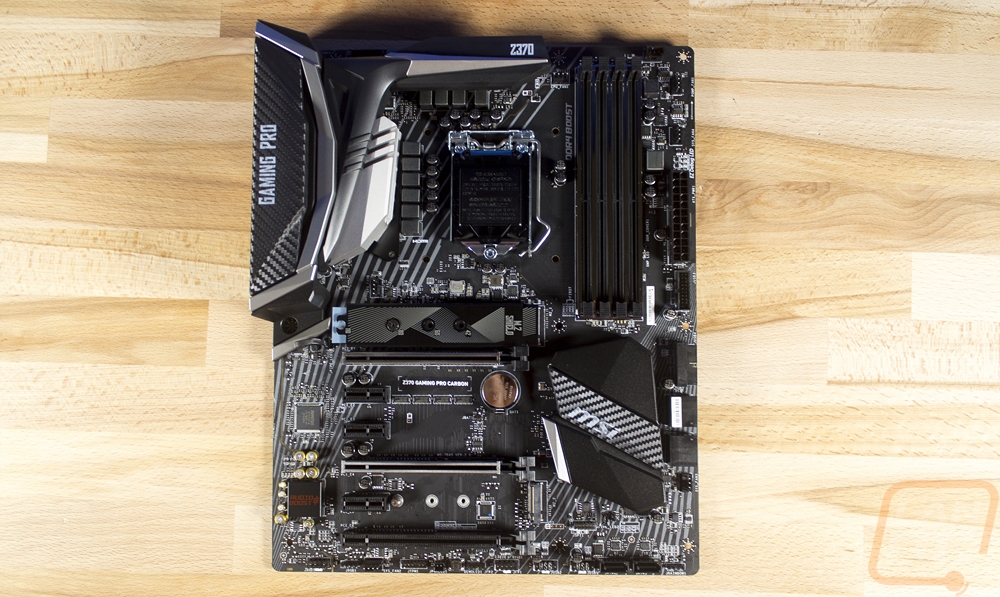 For cooling, MSI has three heatsinks. There is a low profile heatsink next to the PCIe slots to cool the chipset then two for the power circuity above and to the left of the CPU socket. The chipset heatsink is black and has an extremely angular design. To the extent that even on what you would think is the flat side, it is not parallel with the edge of the board. It has the MSI logo on top of the fake carbon fiber and a touch of silver as well. As for the power circuitry heatsinks, well they have a little more meat to them to do actual cooling. The mounting surface though isn’t very wide. They get wider and ad a few short grooves to add to the surface area. They are linked together with a plastic shroud but they don’t have any heatsinks connecting them together functionally, it is just an aesthetic look to combine them. 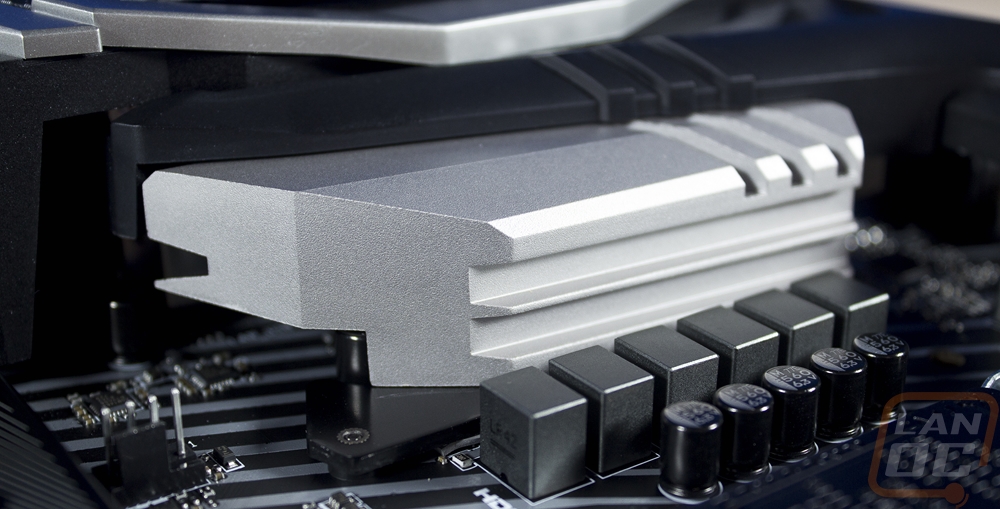 The shroud that connects the two heatsinks also tucks up under the rear I/O shield. This also has a really aggressive style for the shape and I actually like the shape but I could go without the fake carbon fiber. I know it fits the name but a small touch of real carbon fiber would look WAY better. It has the Gaming Pro designation on it and between the silver and carbon fiber on the CPU socket side, it has an LED strip with addressable LEDs to add to the lighting, similar to what Strix boards have had. 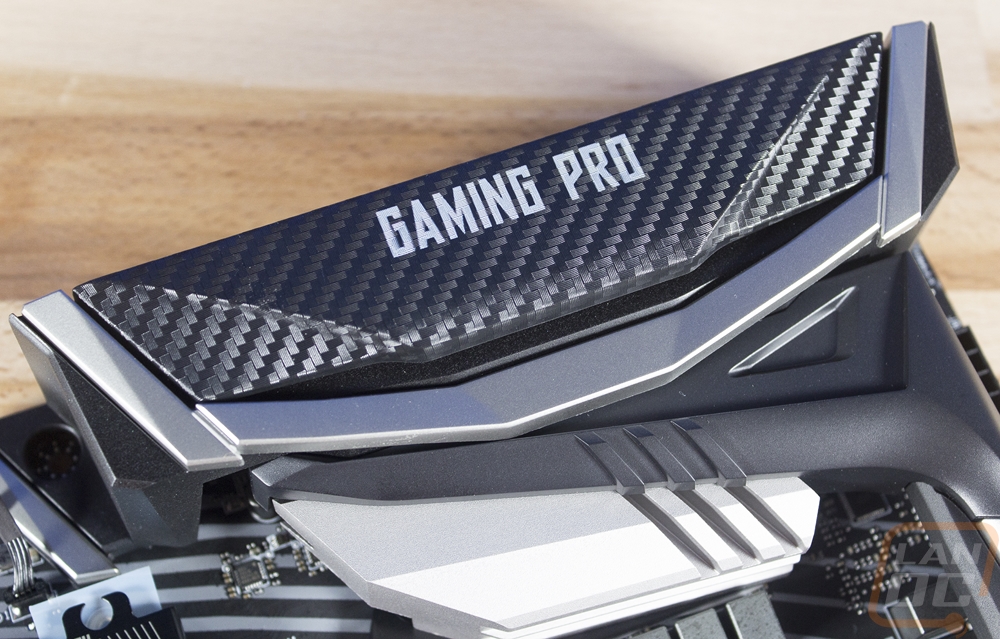 Okay starting up in the top left corner to take a closer look at the board features. This area is mostly filled with the rear I/O and the CPU socket, not to mention the two heatsinks and the plastic part connecting the two. But there are still a few things of interest. Down under the left heatsink, there is a well placed PWM fan header that is perfect for your rear mounted case fans. Then up top under the heatsink, MSI has also tucked in the 8-pin CPU power along with a small four pin RGB header for top mounted lighting. 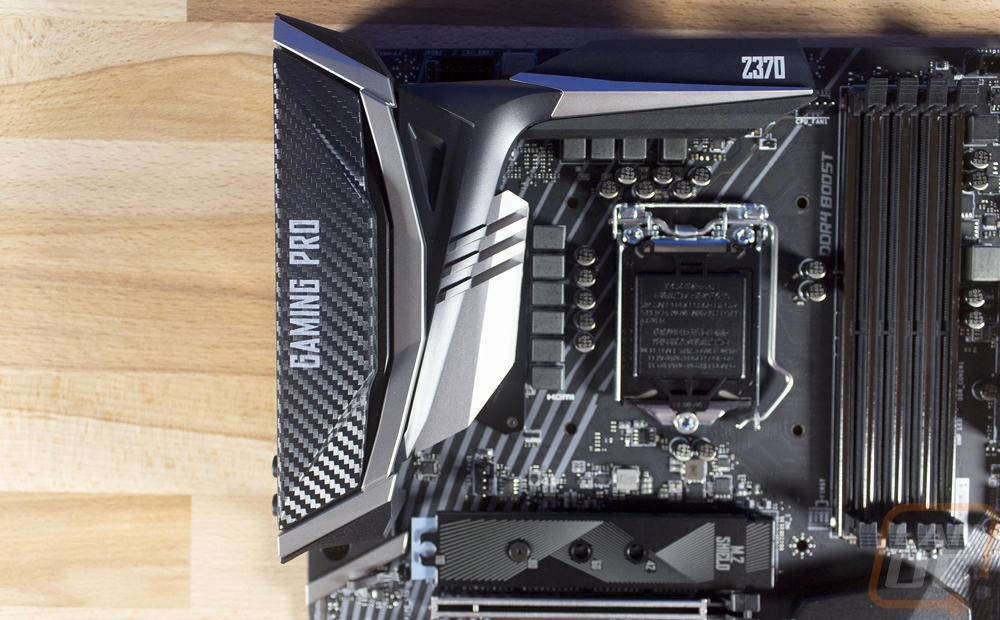 In the top right corner, there is a little more space for things. The biggest thing in this area are the four DDR4 DIMM slots. They all have metal shielding on them and use top and bottom clips for a more traditional memory installation. To the left of that there is one CPU fan header and then over on the right, there are two more PWM headers. This is also where you will find the 24 pin motherboard power and just below that the USB 3.0 header. Also in the area is what MSI called the EZ Debug LEDs, these basically show where in the boot process things are when they hang to help point in the right direction. There is also a small surface mounted LED that lights up when you have the XMP profile turned on with the memory. The last connection right up on the top corner is the new addressable LED header for even more customization with RED lighting. 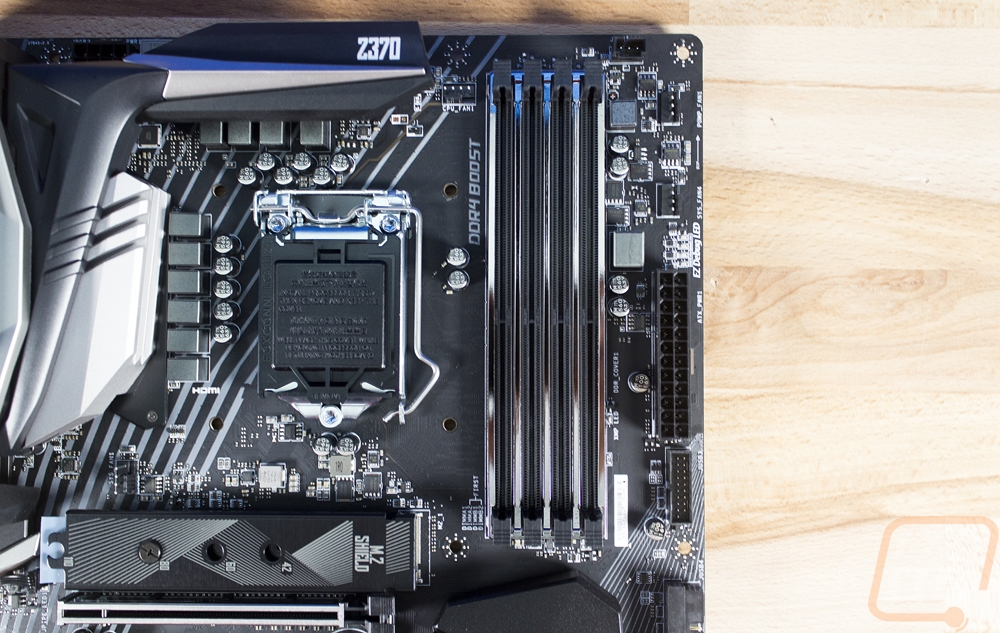 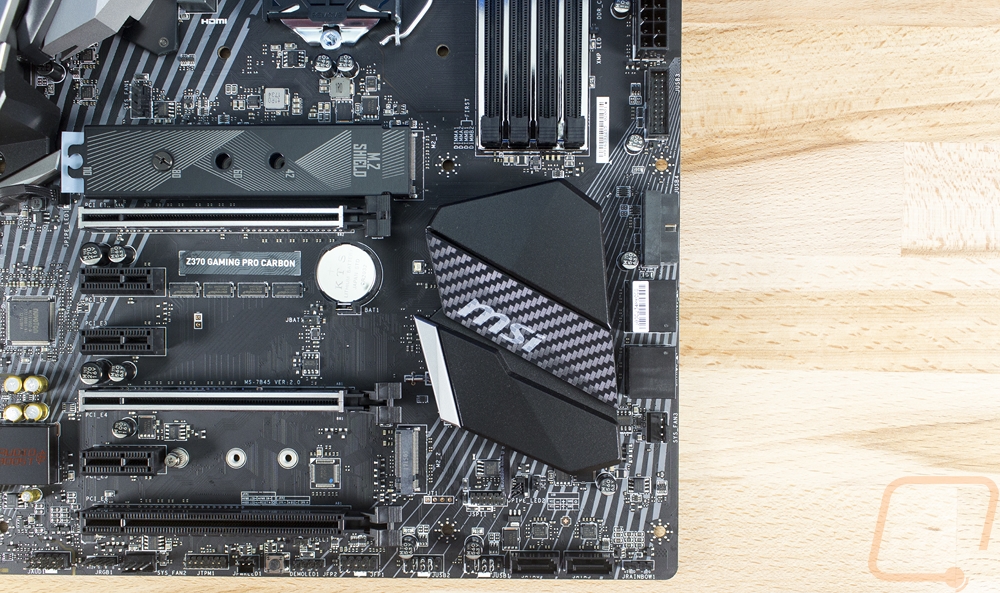 Along the bottom left edge, there is another four pin fan header along with another traditional four pin RGB header. The front panel audio connection is over on the far left and you can see that MSI used a shield over the audio controller and high-quality caps as well as the split PCB that everyone is now doing.

For PCIe options, you get three x16 length slots but only two have the metal shielding that adds additional support for today's heavy video cards. There are also three x1 slots as well with a double gap between the top two x16 slots. The x16 slots will run at 16 for the top with the middle disabled and x4 on the bottom or x8 in both shielded slots and x4 in the bottom. There are also two M.2 slots slipped in here. One up top with a metal shield that can go over it and a second down above the x4 slot. They both run at x4 and support PCIe or SATA drives. 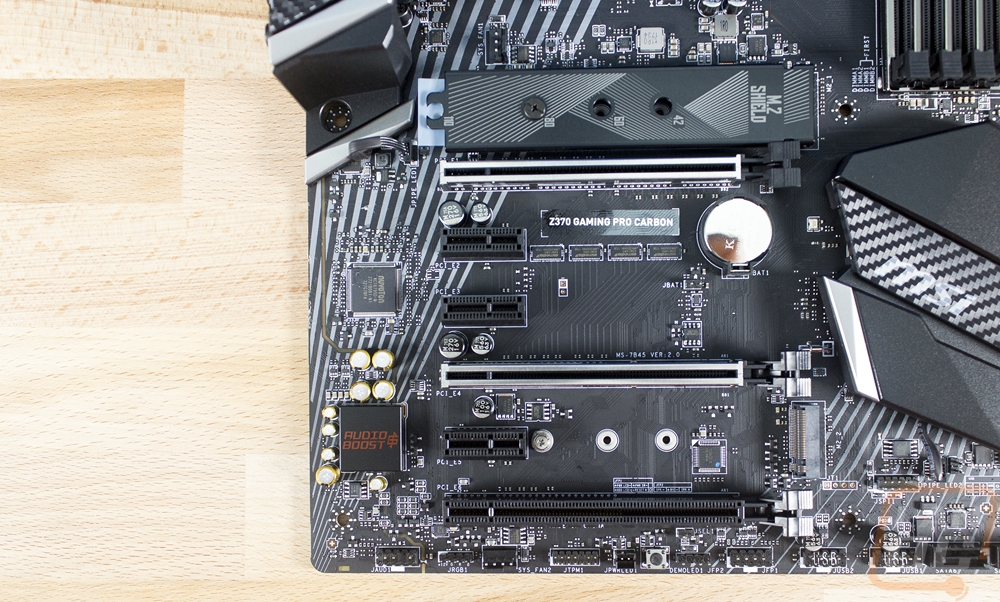 For the rear I/O this board seems a little bare without the wireless adapter of the otherwise matching Carbon AC model. You do get Displayport and HDMI ports but there is actually room for a DVI as well I’m surprised it wasn’t included. Over on the left, you get a PS2 port for those using old keyboards and mice as well as two USB 2.0 ports. Then over on the far right is the 5+optical audio connections with the main audio out highlighted in red. The Intel NIC is paired up with two USB 3.1 ports in red as well as two more above the HDMI port. Then the Type-C and the red port above it are both Gen 2 speed ports. Having red on the 3.1 and the faster Gen 2 ports is a little confusing though, I wish they would have colored the 3.1’s better there.

The back of the board is the cleanest styled area. Here there aren’t any screen printed lines on the PCB so it is all blacked out with the exception of all of the required logos they have hidden back here. From the back, you can see that all three heatsinks are mounted with a screw from the back but with no backplates. 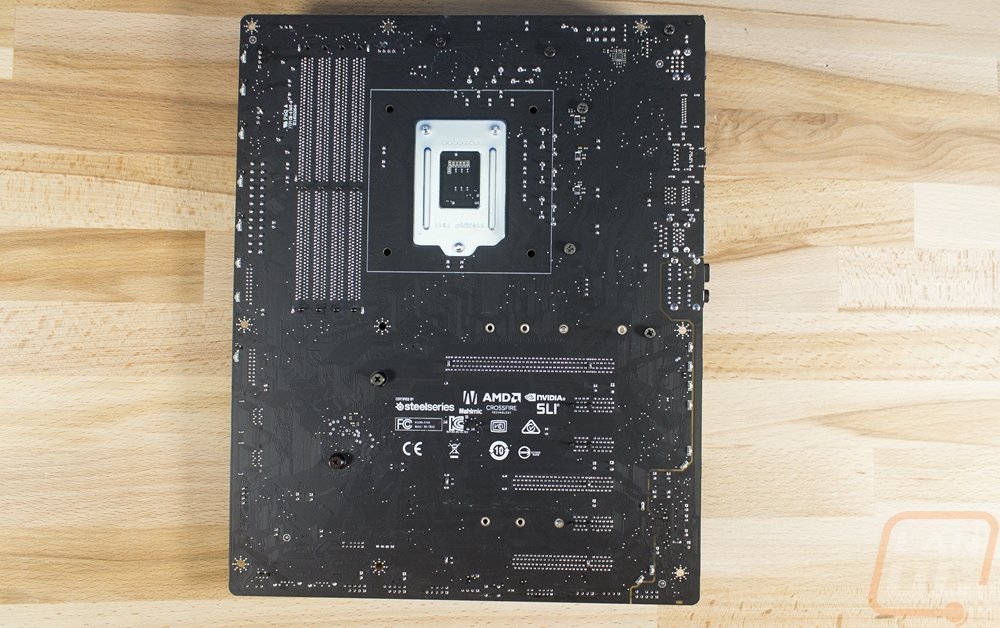