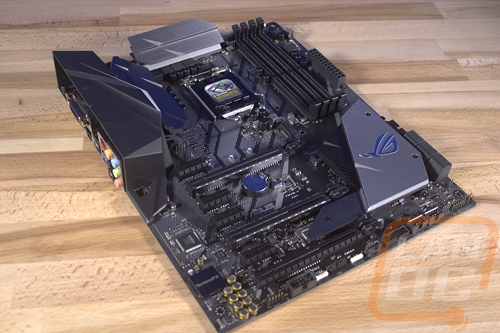 Okay, I might be a little crazy. Every new CPU launch everyone is excited about what the CPU has to offer. While I do love that part of things, I’m also just as excited to see what is going on with the chipset and the motherboards. The Asus ROG Strix Z370-F is the first Z370 board to come through the office but I’m sure it will be far from the last. As far as the chipset goes, this one isn’t nearly as exciting compared to AM4 where we finally saw a lot of features being added. Really Z370 is Z270 only with upgraded stock memory clocks and support for the new 6 core CPUs. Because of that, it does show in Asus’s board, this isn’t a big jump from the Z270 Strix boards. They upgraded the cooling but it is hardly visible when you first look at everything. But did we really need anything? The Z270 Strix boards were solid, have awesome styling and good performance. The Z370-F has all of that. I love that they added the addressable LED header in addition to the normal Aura headers and the M.2 heatsink is a nice touch as well.

As for downsides to this board, well I just had a few and they will really depend on how you plan on using the board. I really would have liked to see more USB ports on the rear I/O and I would have been happy with them just being USB 2.0. It was also weird that the Z370-F doesn’t have one of the new USB 3.1 internal headers than Asus pioneered. Beyond that I hope they work on the mouse tracking in the BIOS, I’ve never had issues with that in the past with Asus boards but have experienced it on this board and another that I will be writing about soon.

Overall though I don’t think any of those issues will be a deal breaker for most users, unless you are like me and use far too many USB devices all at once. Asus didn’t change too much of the styling so you still get a good looking board but with support for Coffee Lake, that’s assuming you can find one I guess. The $179.99 MSRP falls right in the middle of a few other Asus Z370 boards so you do have options if you would prefer a Prime themed board or one with a ROG like touch of red. But for me, the color neutral Strix look has to be the best for anyone who doesn’t know what case they are going to go with or if you plan on taking advantage of all of that RGB lighting on the board and with the headers to set your build color depending on your mood. 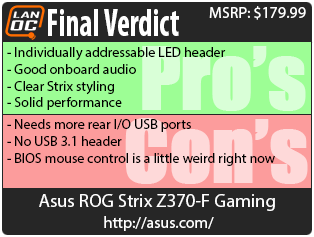 You might call him obsessed or just a hardcore geek. Wes's obsession with gaming hardware and gadgets isn't anything new, he could be found taking things apart even as a child. When not poking around in PC's he can be found playing League of Legends, Awesomenauts, or Civilization 5 or watching a wide variety of TV shows and Movies. A car guy at heart, the same things that draw him into tweaking cars apply when building good looking fast computers. If you are interested in writing for Wes here at LanOC you can reach out to him directly using our contact form.
Discuss this article
Log in to comment
Posts in discussion: Asus ROG Strix Z370-F Gaming

We have 825 guests and one member online