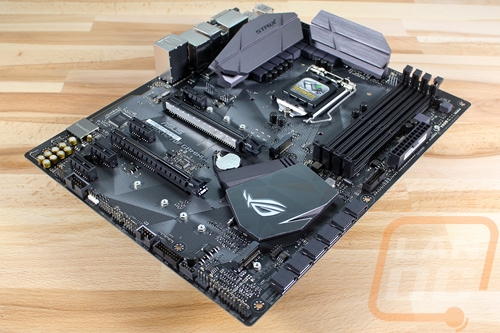 At first glance, the H270F really doesn’t look much different from the Z270E that I took a look at a while back. Sure the chipset is different, but they are very similar with the Strix aesthetics. Even side by side I had to look close with the exception of there not being any I/O cover on this board. That’s a good thing though, the Strix look is one of my favorites right now. I love the color neutral scheme that fits in any build. You can use the built in Aura lighting and RGB case lighting to control your look. 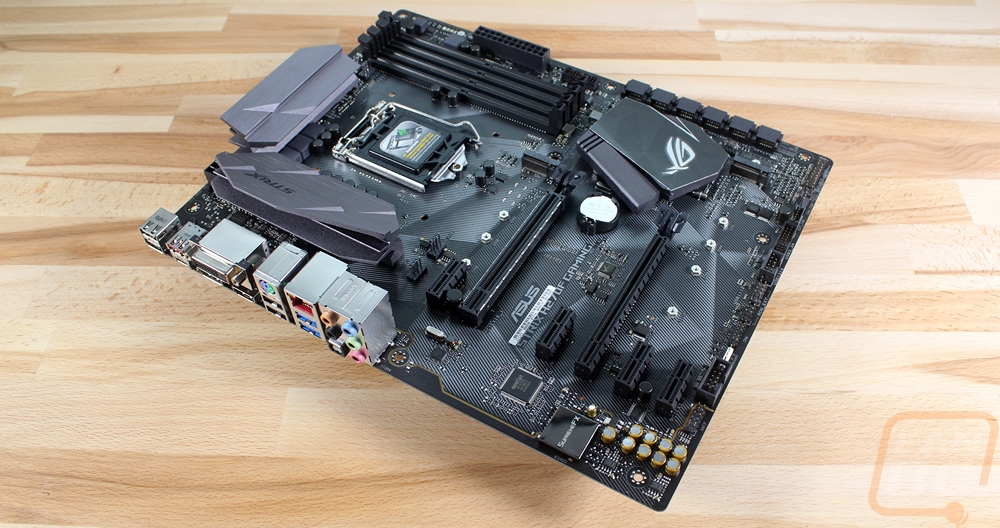 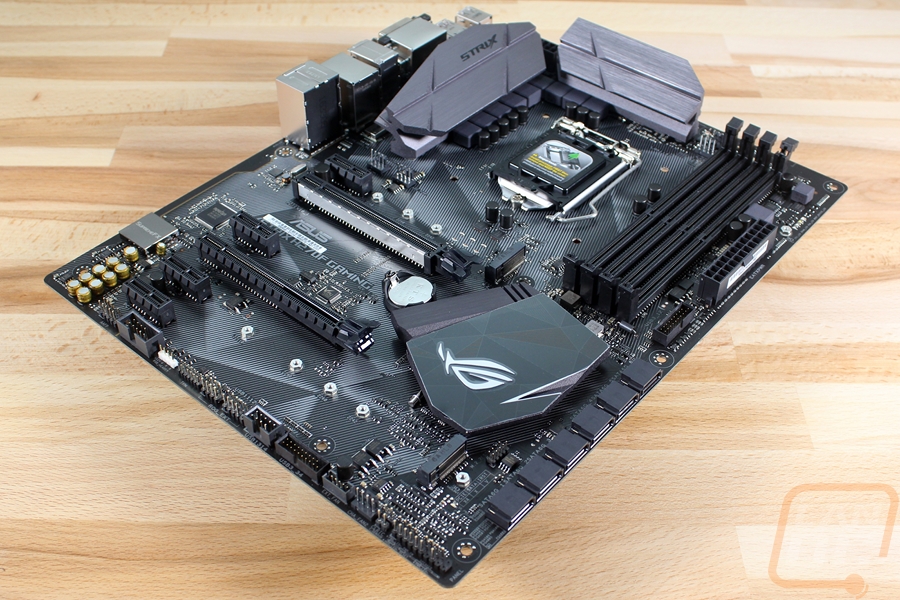 The angular Strix styling is especially apparent on the heatsinks. Up around the CPU socket, there are two heatsinks, one on the left and one just above the CPU. They both keep the power circuitry cool with a lot of surface area when viewed from a side profile but they don’t have heatpipes connecting the two at all. They have a mid to light gray anodized finish and they are both aluminum. There is only the tiny Strix logo on them as well. The chipset heatsink is low profile to fit under any long PCIe cards and the base part has that same mid to light gray aluminum finish. On top of that they cut out a black panel and it had the ROG logo on it. The heatsink doesn’t have any 90-degree corners on it, sticking with that angular Strix design. 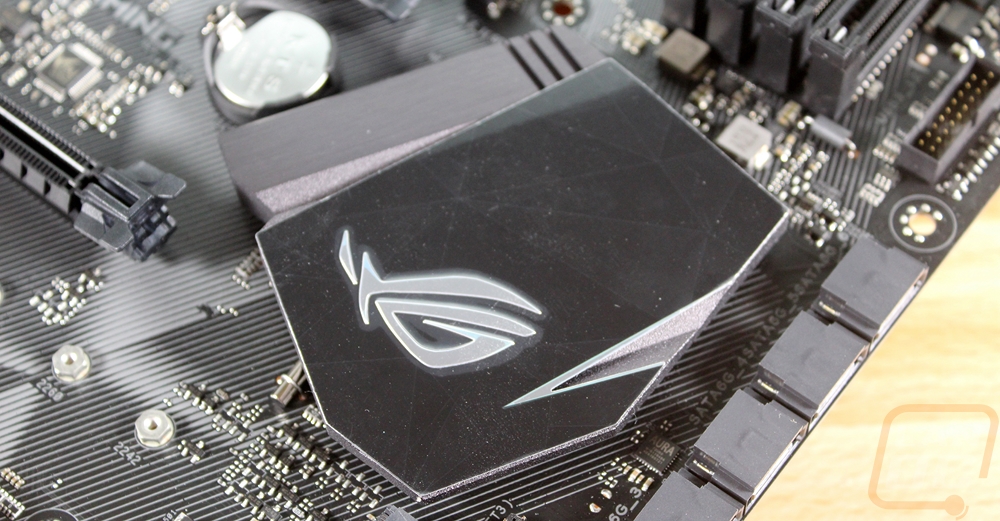 Starting up in the top left corner of the board you have the rear I/O panel without any cover. Then they have tucked the 8-pin CPU power up in between the two heatsinks. Below the left heatsink they have tucked away two 4-pin PWM fan headers for case fans and to the right of the top heatsink, there are two more. Those are for the CPU fan and a CPU optional. The CPU socket area has a weird striped design printed on it rather than just showing the nice black PCB for some reason. 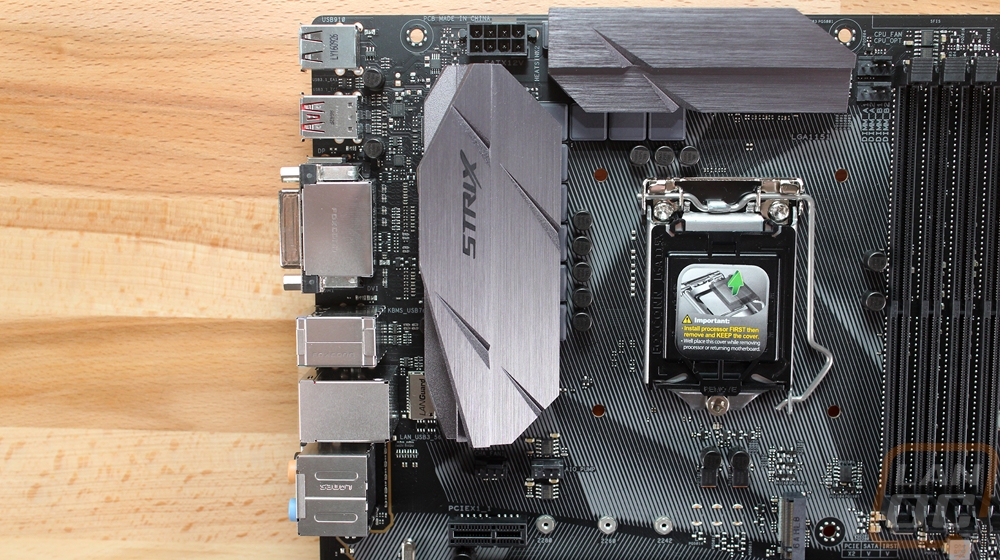 Moving over to the top right corner the biggest thing in this area are the four all black DDR4 DIMMS. They have clips on the top but no clip on the bottom to make ram installation easier. Next to the RM is the 24-pin CPU power. Then there is a USB 3.0 header just below it. 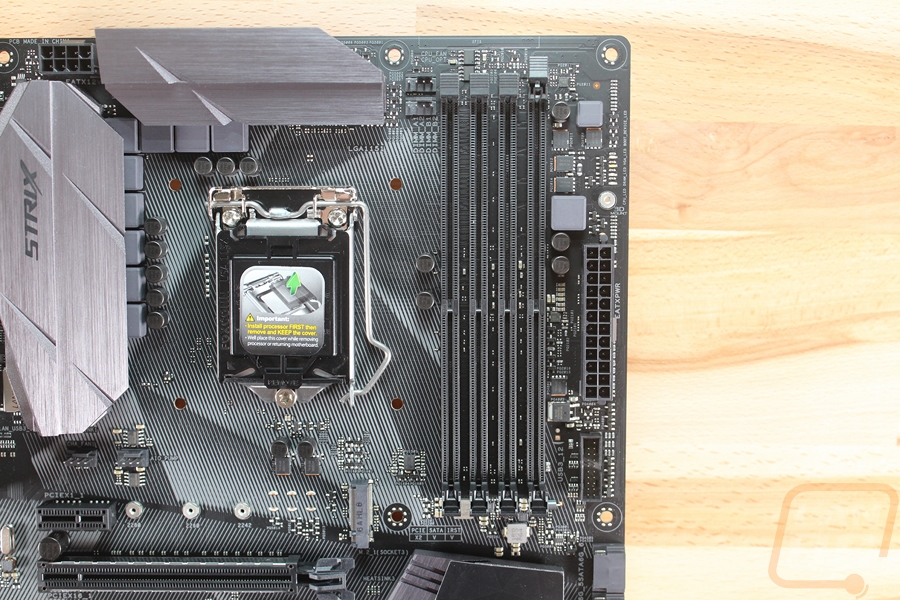 In the bottom right there is a long line of SATA ports but oddly enough they are only one port high so it looks like there are more than there actually are. You end up with six though, that should be enough. There is then a full-length M.2 slot below the chipset heatsink. From there, along the bottom edge east of the headers are packed in tightly next to each other starting with the front panel connection in the corner. There is a USB 2.0 header and a  second USB 3.0 header but there isn’t one of the new USB 3.1 headers that cases should be moving to soon. Then there is a fifth 4-pin fan header. 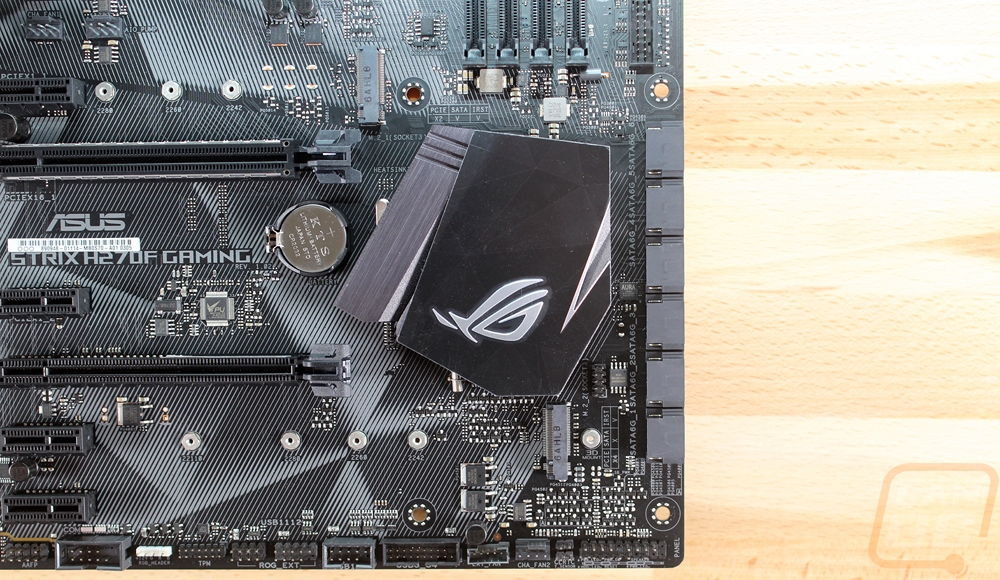 Continuing to move across the headers on the bottom there is an ROG extension header and a TPM. Then the bright white plug is the boards one Aura RGB lighting header where you can hook your case lighting into the board and sync it all together. Then over on the left is the front panel audio. The audio chipset for the H270F is surprisingly good for a more budget focused board. They included an 8-channel High Definition Audio CODEC S1220A along with dual headphone amps. Then up in the PCIe slots, there are four PCIe x1 slots and two PCIe x3 length slots. The top slot has a metal shield on it and runs in PCIe 3.0 at x16 speed and the second x16 slot is just an x4 speed slot. The H270 chipset drops some PCI lanes to the CPU and isn’t designed for any multi-card configurations. They also slipped in a second M.2 slot up at the top as well.  The bottom M.2 slot supports x4 PCIe only and the top one runs in x2 PCIe but does support SATA drives as well. 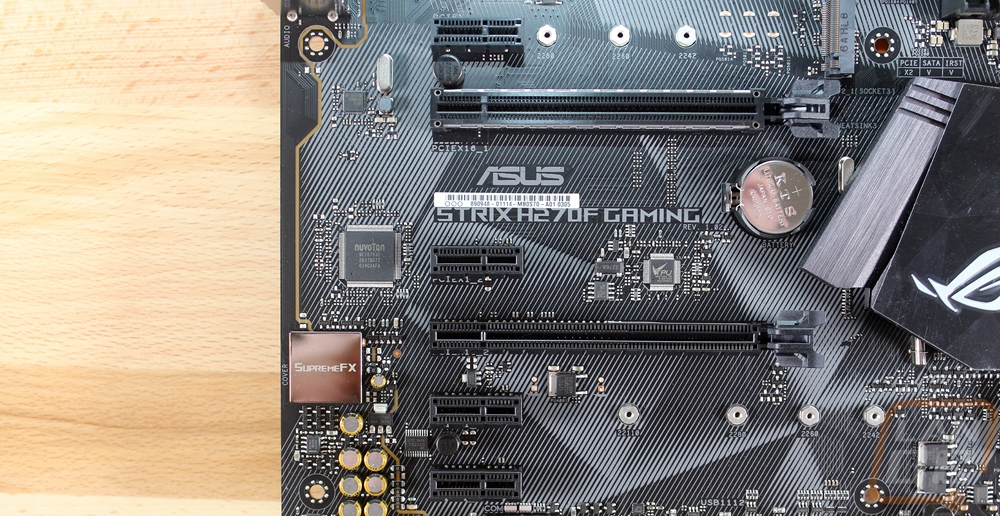 The rear I/O panel is packed full of features. Over on the right is the standard 5+ optical audio layout. Then you have three onboard display options with the DVI, HDMI, and DisplayPort connections covering just about anything you might need. There are then four USB 2.0 ports and a legacy PS2 port for people wanting to run their order keyboards. Over on the left, the red USB port is a USB 3.1 as is the Type-C port below it, then the two blue ports are USB 3.0. Last but not least is the Gig Ethernet port running on the Intel I219V NIC. Asus also slipped in their LAN guard protection behind the I/O for the network port just in case you get a power surge through it.

Last but not least, the back of the H270F gives a better look at the flat black PCB color. We can also better see the break in the PCB around the audio circuitry down in the corner. 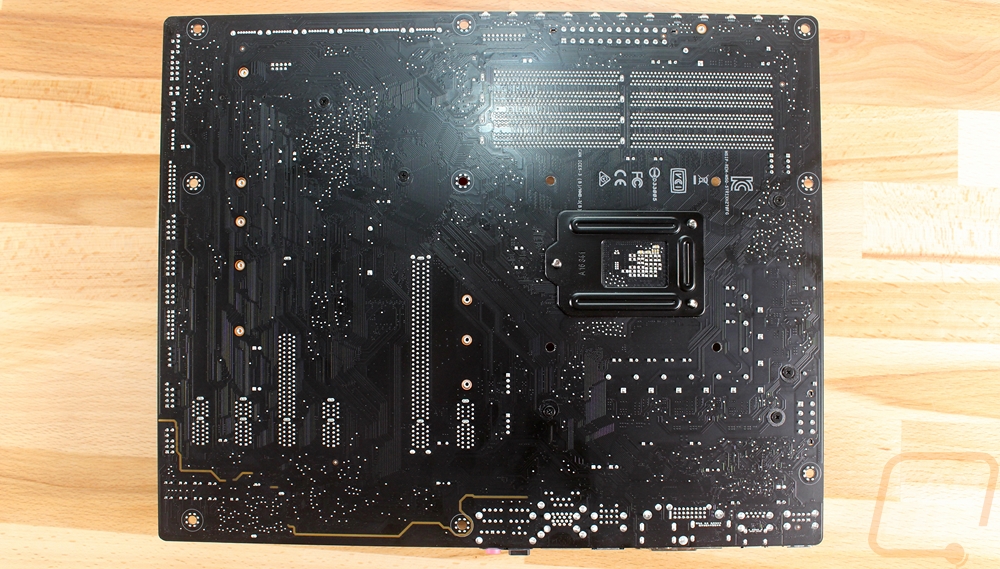