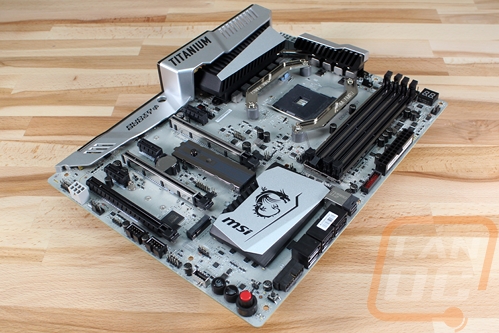 Welp, that’s a completely different looking board. MSI didn’t just add silver covers and call it a day. The X370 Titanium has a silver PCB topped with black and silver on all of the accessories. The full length I/O cover that runs all the way down to cover the audio chipset is also silver but more importantly it actually had me wondering if it was metal when I first saw it. Its not, but the design isn’t over the top and looks like it would be a metal cover. Now the CPU socket on our sample came with our Noctua cooler brackets pre-installed, but it does normally have the same standard AMD hold downs that you would expect though the metal brackets from Noctua do go with the look more. What is interesting to me though was the CPU power and the PCIe power connections being silver to match but the rest are all black. 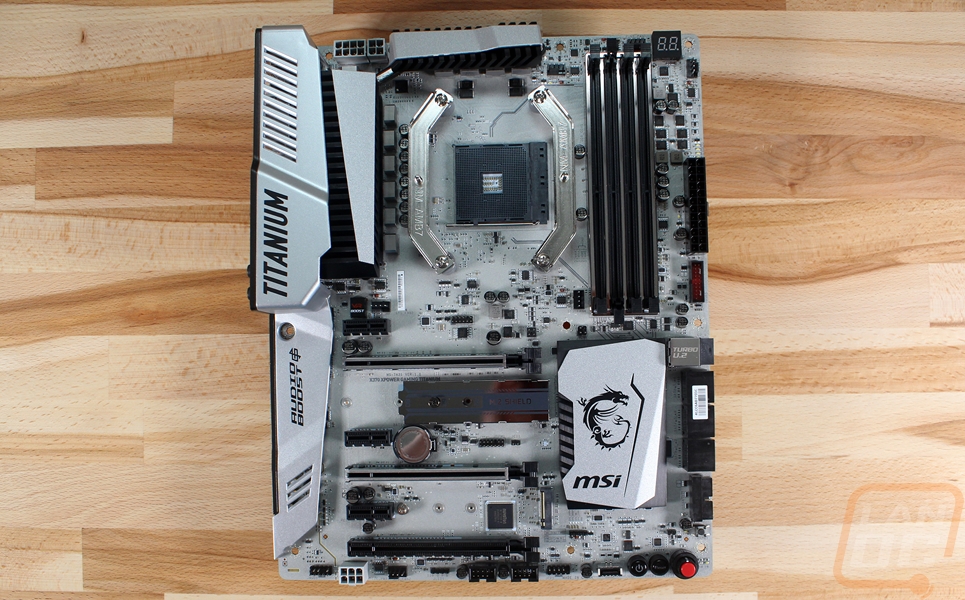 For cooling the X370 Titanium has three heatsinks, one chipset heatsink and two for the power phases around the CPU. Of the power phase heatsinks, the one on the left is the main heatsink and the other is connected via a heatpipe and much smaller. Both are black and have an actual heatsink design with lots of surface area. There are then just silver accents added to the top of each of them but no branding. The chipset heatsink is thin and sits in between the PCI slots and the SATA ports. It is also black but the silver accent on top is much larger and it has an MSI logo and an MSI Gaming Dragon on it in black. 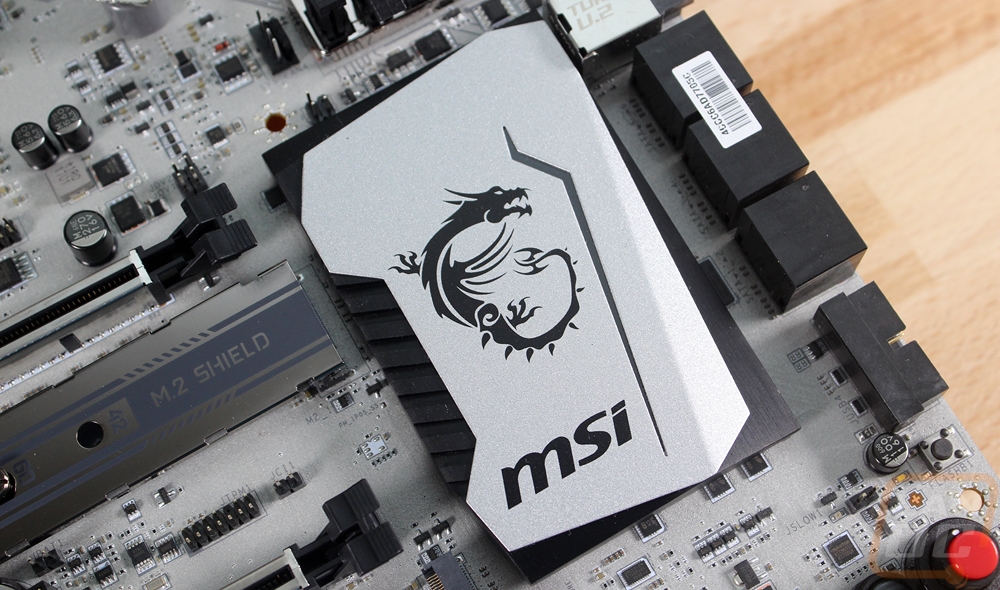 Starting up in the top left corner, the I/O cover and the two heatsinks dominate this space but there are a few other things going on. For starters, for CPU power the X370 Titanium has an 8-pin CPU power along with an additional 4-pin. Also around the CPU socket are three fan headers. There is one up top and then two down at the bottom of the photo on the left and the right. 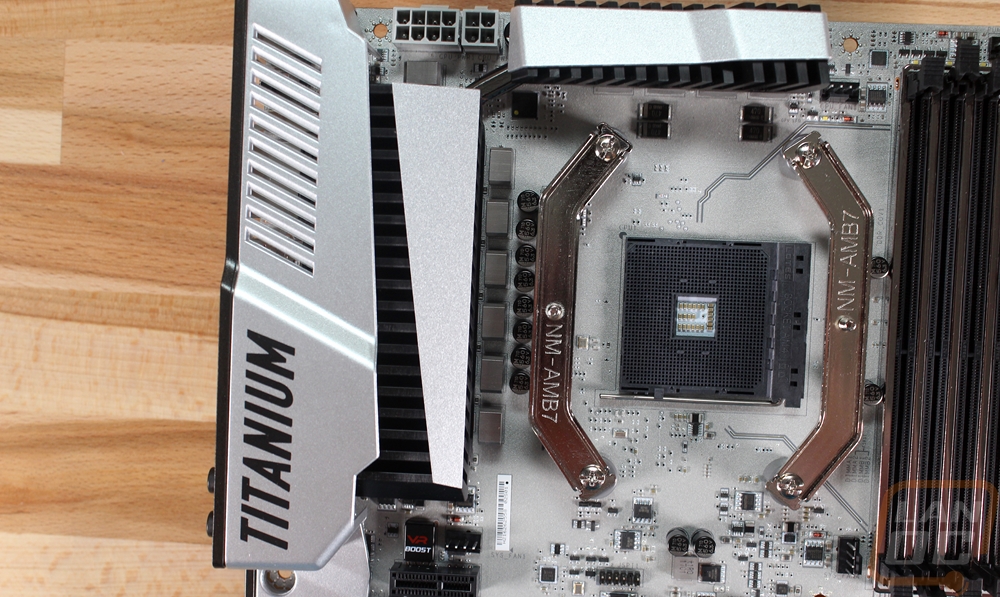 On the top right, the main feature are the four DDR4 DIMMs. They are black plastic but each has a metal shield as well. There is another 4 pin PWM header, this time for a pump or fan so it is tied to your CPU and then next to it, they have the motherboard code LED readout. There is yet another PWM header next to that and you can’t really see them but there are a few LED lights just above the 24 pin Motherboard power. Also in that area, I did spot a small SMD that is twisted and installed wrong, so if we end up having issues with this board I wouldn’t be surprised is that is the problem. Last but not least, under the 24-pin power is a USB 3.1 Gen 1 header. SO you get a bump in speeds but not the full gen 2 10BGps. 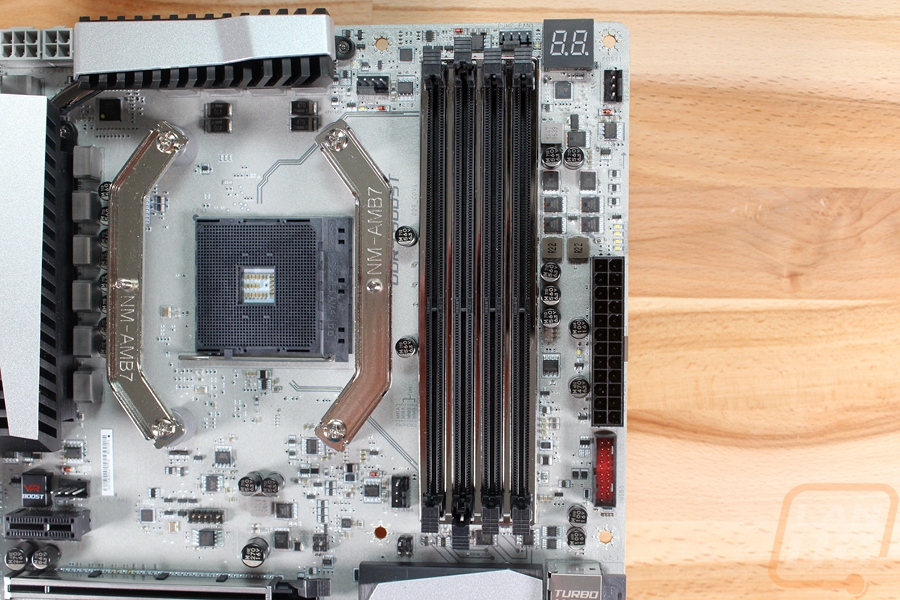 Moving down to the bottom right there is a lot going on here. Over on the right edge, there is a new U.2 port for drives like Intel’s 750 Series, it is basically an external M.2 port and below it, there are 6 right angled SATA ports. There is also a right angled USB 3.0 header for people who prefer that for wire management, giving you the option to have a total of 4 front panel USB 3.0 ports. The bottom edge has two USB 2.0 headers and a new style USB 3.1 header. There is a small button for a BIOS flashback and then there are larger buttons for power and reset. Then the red button is actually the new overclock tool where you can flip through different settings. 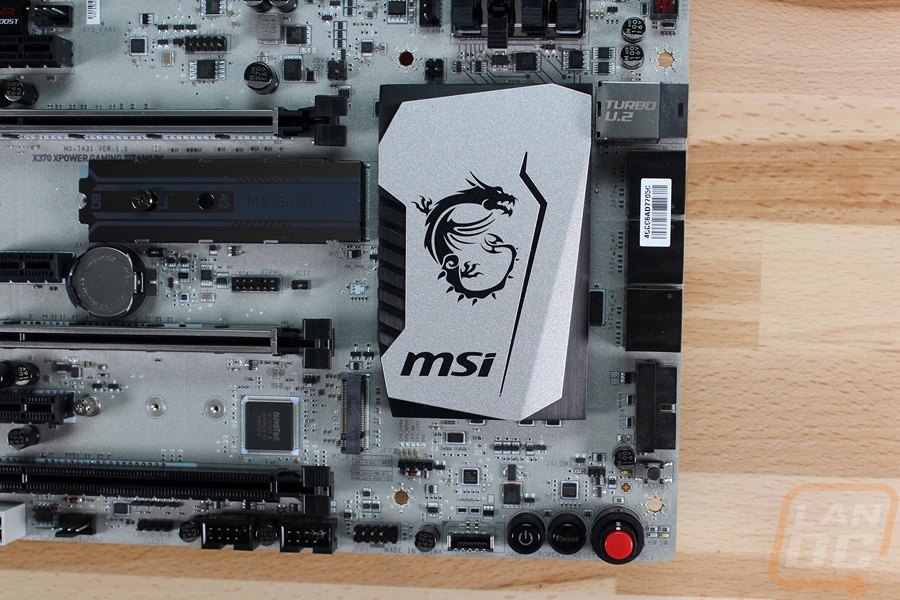 On the left side of the bottom edge, we can better see the two USB 2.0 headers I mentioned before. There is also a header to hook up RGB lighting next to them and then another PWM Fan header. I’m really digging that MSI didn’t skip on fan headers, or anything really. For PCIe power, there is an addition power connection down here. They went with a 6-pin PCI plug and it is silver to match the board. Last but not least, over on the left is the front panel audio header.

Up in the PCIe slot area, the X370 has three x16 length slots, two x1 length slots, and two M.2 slots. The top two PCIe slots are PCIe 3.0 and they have metal shielding that helps protect from interference and also help hold the heavy video cards without damaging the slot. If you are running just one card you get a full x16 to the top slot but when running two it drops down to x8 per slot. Then the bottom x16 slot actually runs in x4 mode. The top M.2 slot is a 2242/ 2260 /2280/ 22110 length slot and it runs at PCIe 3.0 x4. The bottom M.2 slot is slower, running at PCIe 2.0 x4. The top slot also comes with what MSI calls M.2 Shield, it looks good but there has been some testing showing that shields like this can actually hurt heat so it’s up to you if you want to use it. 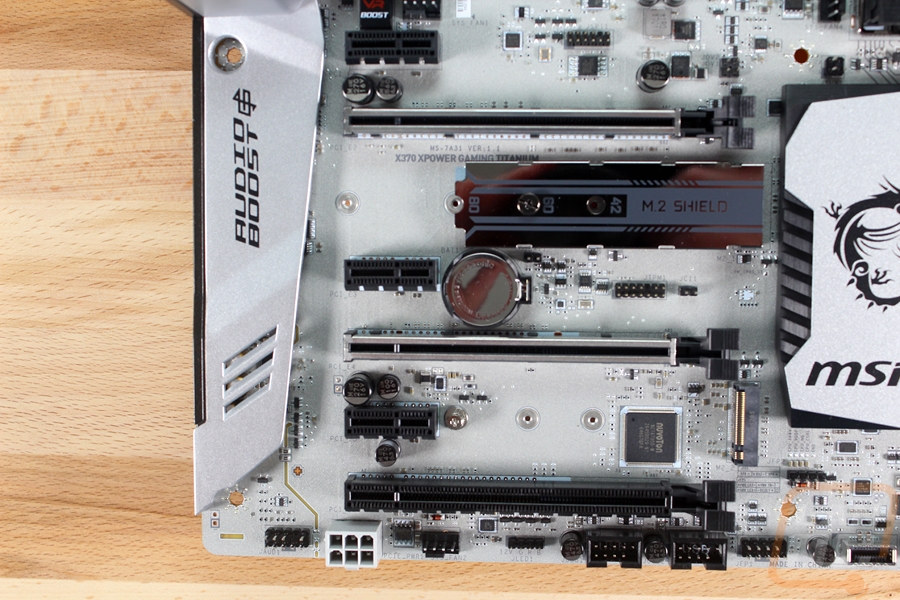 If you thought the top of the X370 Titanium was bright, you should see the bottom. Without the CPU socket, the ram dims, and a few heatsinks bringing a little black into the mix the back of the board is VERY silver. This view also helps give me a look at how the get that color as well. The board is actually a white PCB then they use that as a base for the silver finish. You can see around the PCIe and RAM DIMMs that they couldn’t paint those areas. The bottom also has all of the federal certification logos and logos for the SLI support and even one from SteelSeries for some reason. We can see that all three of the heatsinks are all attached from the bottom with screws as well. 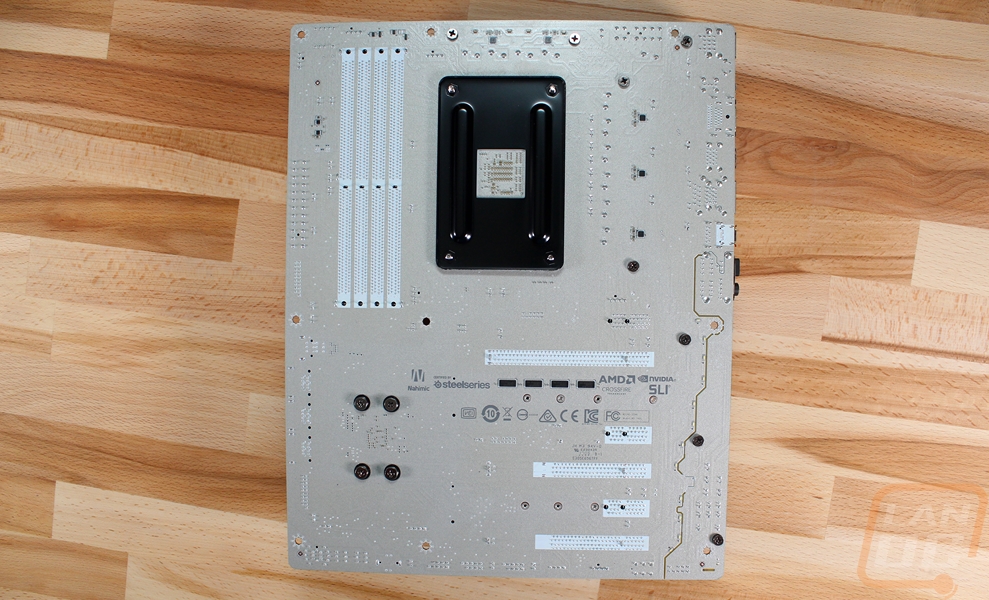 The rear I/O panel has a mix of connections going on. Over on the right, it has the standard 5 plug + optical layout and they have made sure each plug has a gold connection. The red colored plug runs through the headphone amp so make sure to use that if you are hooking up headphones. Beyond that, for future display connections, you get a full-sized DisplayPort and an HDMI. There is a tiny button to reset your CMOS without pulling your PC apart and over on the left, there is a PS2 port along with two USB 2.0 ports for your peripheral connections. There is also a vertical USB 2.0 next to the CMOS button that you can use to update your BIOS. I was a little surprised to see all red ports on the rear I/O, MSI actually went with four USB 3.1 Gen 1 ports over putting in USB 3.0 blue ports. Then the fifth port on the right is a USB 3.1 Gen 2 along with the type-c port as well. It’s a little confusing, but basically, the right ports are faster. Last but not least, for the network card they went with an Intel I211AT Gigabit NIC. Overall it’s a great mix, especially with the higher speed USB ports though I wouldn’t be upset if there had been a few more USB, even if they were USB 2.0 or the now old USB 3.0.