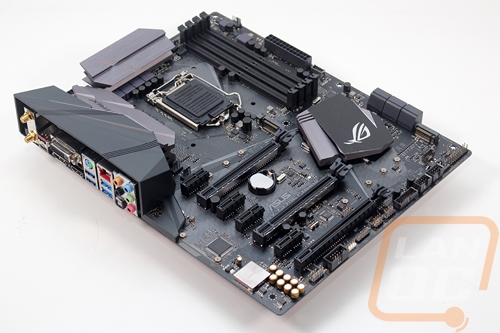 Now all of the Z270 boards have been looking good to me with their color neutral themes for the RGB lighting but the Strix Z270E Gaming looks especially good. The board and all of the plastic parts on it are all black including the rear I/O cover so everything blends in. The heatsinks have a gray color as an accent without standing out too much. There is just the one main lighting accent built into the I/O cover that transitions into the cooler as well. 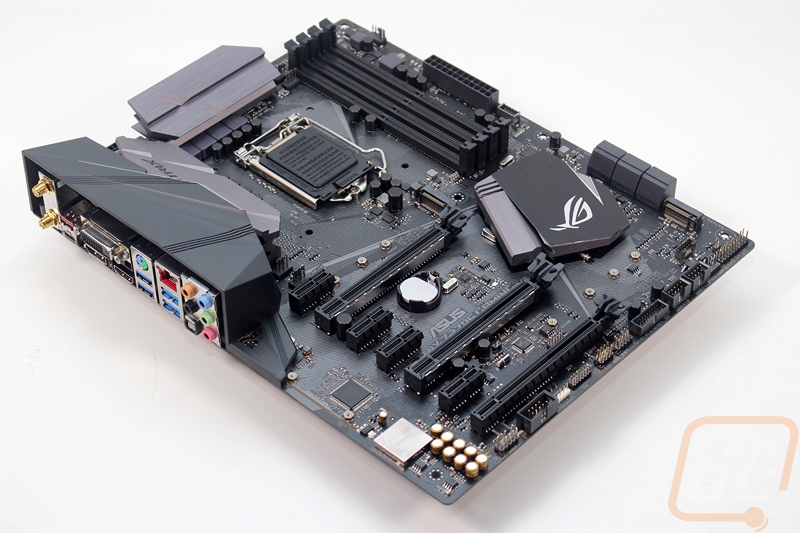 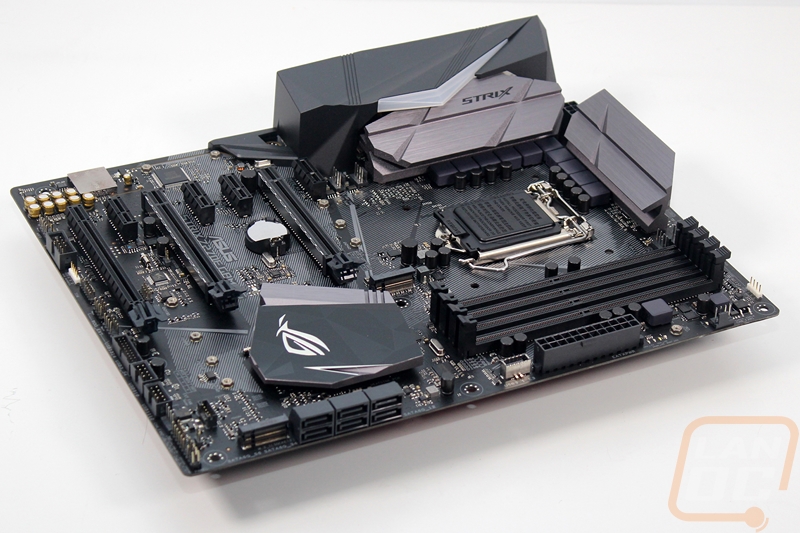 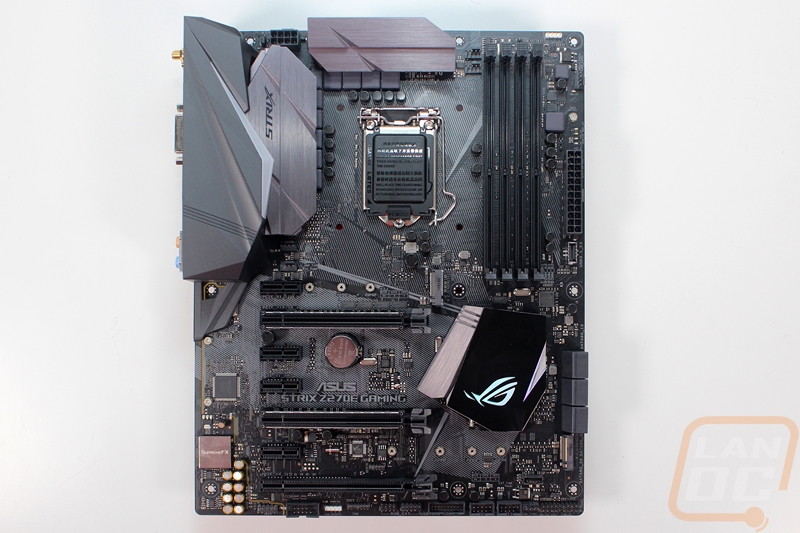 For cooling the board has two heatsinks situated up around the CPU to keep all of the power circuitry cool. They are machined out of aluminum and have that gray color that I mentioned. There aren’t any stickers on them with crazy accent colors or branding, there is just a small Strix logo on the left heatsink. Now the heatsinks aren’t packed with cuts or anything as well for surface area, they most likely don’t need as much cooling as they do stylings but they still should pull some heat away and up into the airflow around your CPU. Down next to the PCIe slots, the chipset heatsink is low profile to fit under your video cards. It does have that same gray color but his one has a black stick on aluminum cover with the ROG logo on it and an angular design in the black. 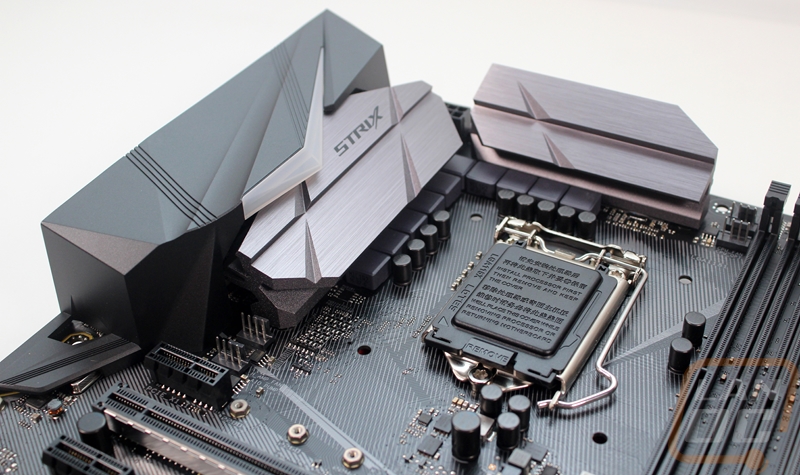 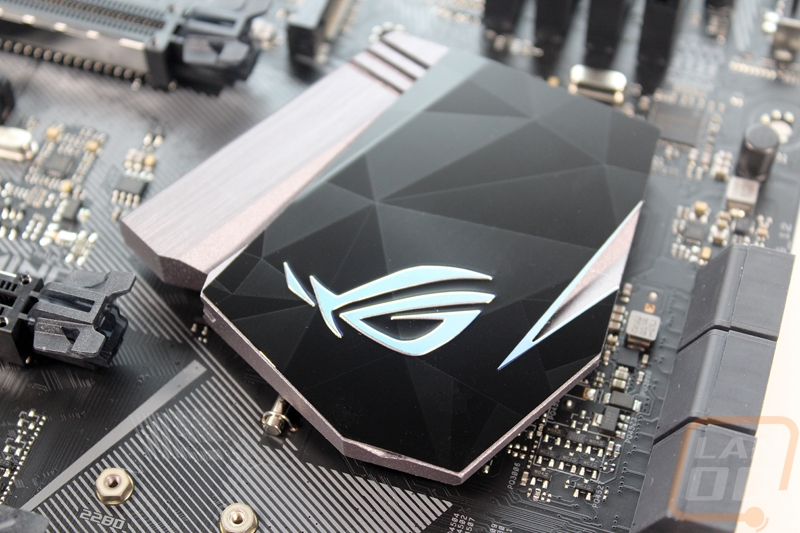 Starting up in the top left corner of the board we can see that the I/O cover actually goes up over the heatsink with its RGB light bar. Asus slipped the 8-pin CPU power up above and next to the power heatsinks. The CPU socket is in the center with 9 chokes visible around it. To control your CPU fan there are two 4-pin PWM fan headers in between the heatsink and the ram DIMMs. One for the main fan and a second for a second fan or your water pump. 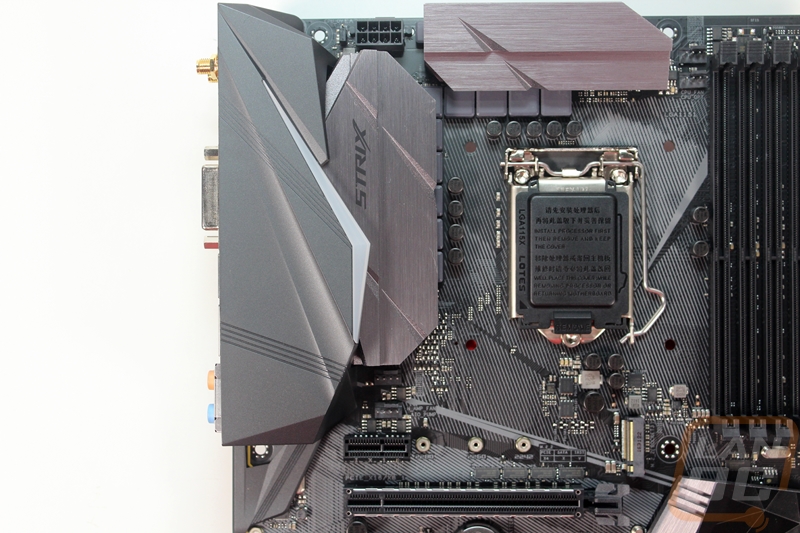 The four DDR4 DIMMs are all black and they only have clips on the one side but they are flipped around with the clips on the bottom where normally they are up top. There is another PWM fan header up in the top right corner for a case fan. The four pin white header up here is the Asus Aura RGB header and it is one of two on this board. I like that they split them up to make it easier to have a light on top of your case and the bottom for example if you want. Also along this right edge is the 24-pin motherboard power connection and a new USB 3.1 internal header, this has been one of my complaints with the other Z270’s I’ve had in. This connection type is the future but a lot of the boards don’t have them. Also right here is a small standoff that looks like the mounting point for an M.2 drive, this is what Asus calls their 3D Mount and it is used to mount 3d printed parts that they have designed, this one specifically is for a cable cover design they have but they also have custom nameplates and even an M.2 fan holder. Given my love for 3d printing, I might have to mess around with this a little more in the near future. 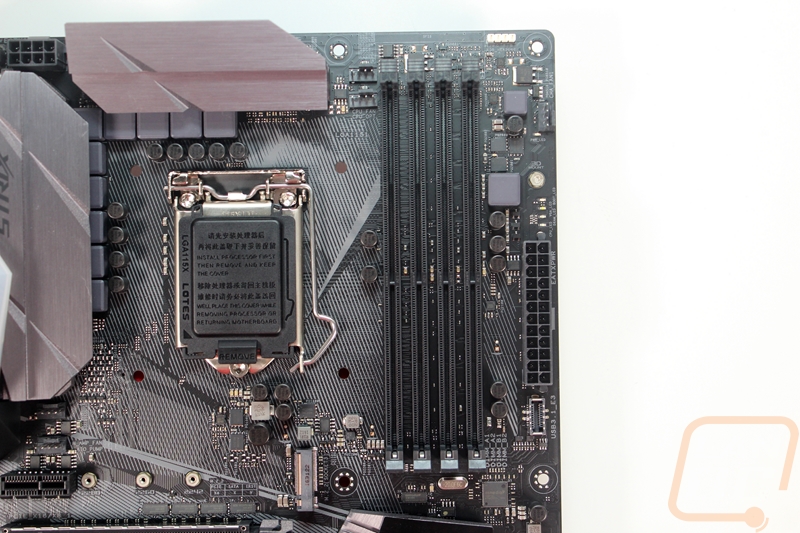 Moving down to the bottom right there are a few things along the right edge. The first are the six standard SATA connections that are all at a right angle. I was surprised that they didn’t go with SATA Express, especially with them including a USB 3.1 header inside, but SATA Express hasn’t exactly taken off. There is an M.2 drive right below them, though. This M.2 slot has support for up to a 22110 length drive and that is really rare to see. It also supports SATA and PCIe drives with PCIe going up to an x4. In other words of the two M.2 drives on the Z270E, this is the faster of the two and it has support for more drive types. 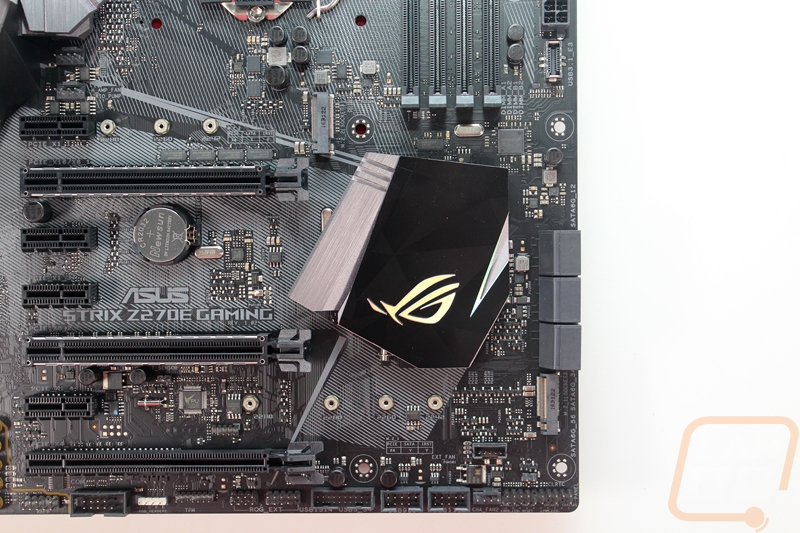 The bottom edge is completely packed with connection options. On the right is the front panel connections. Next to it is a second case fan header that is, of course, PWM. There are then two USB 2.0 and one USB 3.0 headers. Last but not least is an ROG extension header to hook up their external overclocking tool.

The connections carry on over on the bottom left as well with a COM power and a trusted platform connection. The white 4 pin is the second Asus Aura header and then over on the left is the front panel audio connection. The audio header is just to the left of the split PCB and with it the SupremeFX 8-channel controller. The board has Japanese made caps and two built-in headphone amps.

For PCI slots there is a selection. There are three x16 length slots with the top two slots having a metal shield around them for added strength to hold today's heavy video cards. The top slot will run in x16 if you only use one card or the two slots will drop to x8 for two cards. The bottom x16 slot however only runs in x4 mode. There are then four x1 slots as well and up top, the second M.2 slot is tucked in next to the x1 slot. This M.2 slot only supports PCI drives and doesn’t run at x4 bandwidth though so only use it for the slower of your two drives. 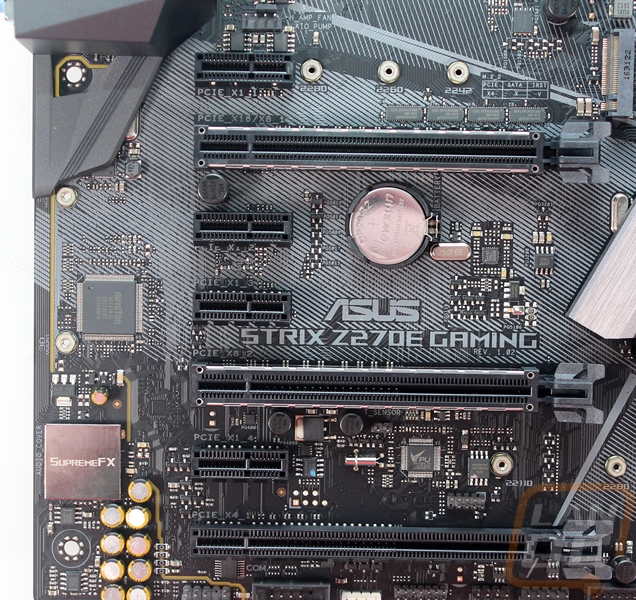 The rear I/O panel for the Z270E is packed just about completely full. Over on the right is a standard audio connection panel with each connection color coded. For display connections for anyone looking to use the onboard video, you get a DVI, an HDMI, and a DisplayPort to cover just about anything you might need. For Ethernet, the red port is a gig connection hooked up to the Intel I219V controller with Asus’ LANguard anti-surge tech as well as the ROG Gamefirst QoS service. The two antenna connections over on the left are for the wireless AC adapter with dual-band support. There is a PS2 connection for those legacy keyboards and mice as well. Then for USB connections, there was only room for four USB 3.0 ports in blue then the red USB connection over on the left is a USB 3.1 Type A connection and the plug below it is the same but Type-C running on an ASMedia controller.

With the Strix Z270E flipped around we get a better look at the satin black finish on the PCB. But I can also see a few other interesting things here. For starters, all three of the heatsinks are all attached using screws, so if you ever want to do anything with them or replace the thermal pads it shouldn’t be difficult. You can also see the resin filled gap in the PCB down in the bottom right in some areas that splits the audio PCB from the rest of the board, it runs all the way up to the rear I/O area. Then Asus also went with a black backplate for the CPU socket to keep everything matching. 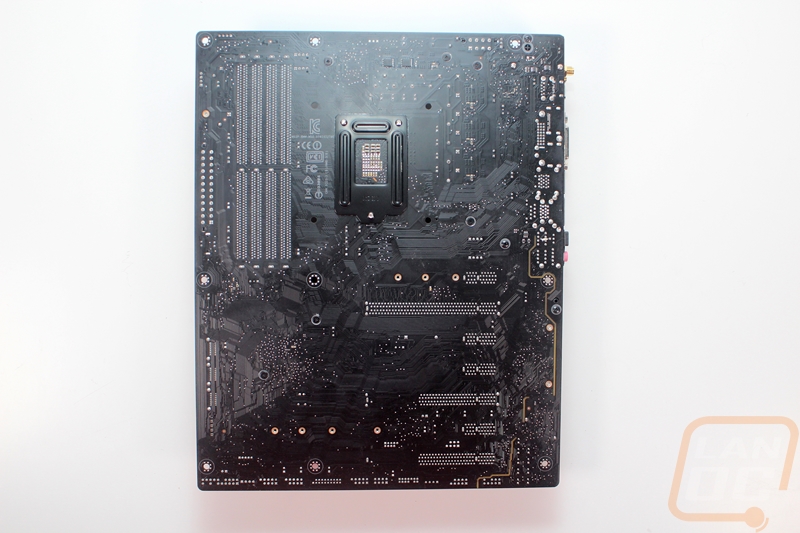 We have 1532 guests and one member online