Gigabyte Z170N-Gaming 5 - Board Layout and Pictures 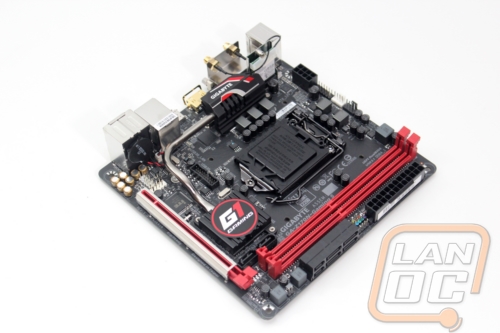 Like basically every other motherboard manufacture, Gigabyte has gone with the black and red theme for the G1 Gaming boards. So the Z170N Gaming 5, while small still has a black PCB as well as red DIMM slots. Being an ITX board there isn’t really much room for styling though, the main focus of the board is to fit as much into it as possible. There aren’t any riser boards though like asus has been doing with their Impact boards for power circuitry and even fan header expanders. 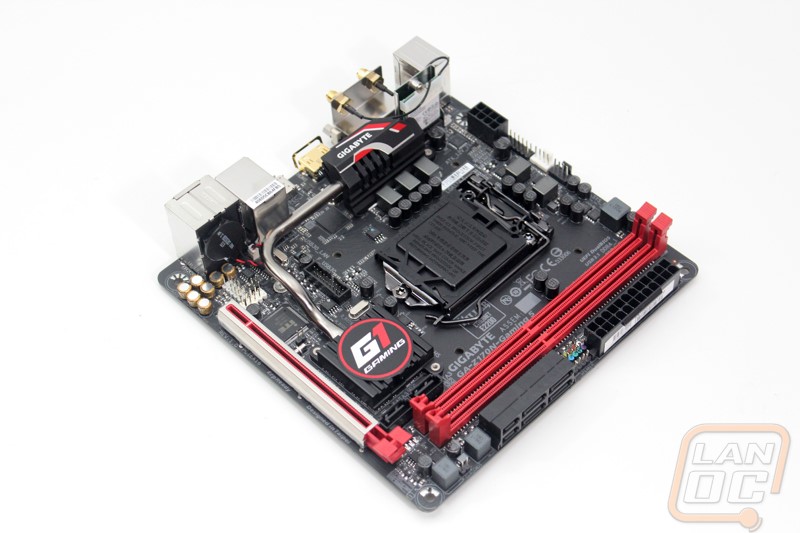 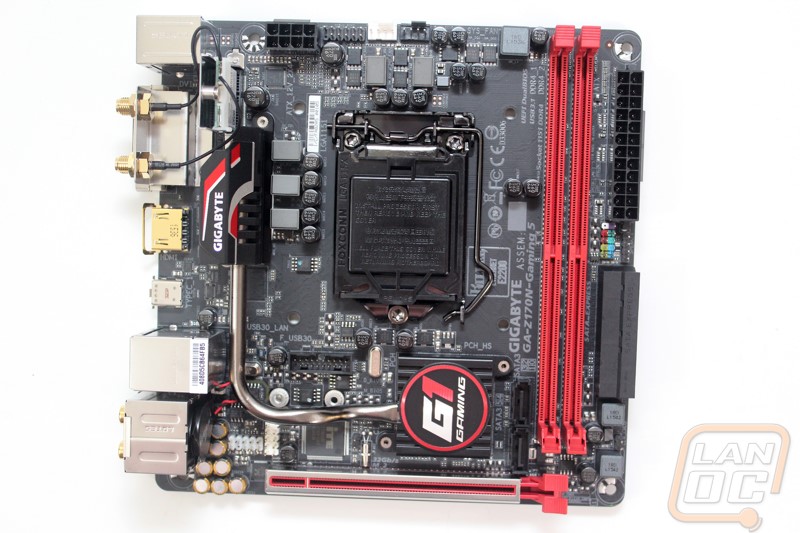 For cooling the tiny ITX board does still have the same two heatsink design like a full sized board but both are much smaller. The chipset cooler sits just above the PCIe slot and is about an inch square in size. It has a G! Gaming logo covering the entire top and is connected to the second heatsink via a heatpipe that runs over to the left then up. The second heatsink sits to the left of the CPU socket right next to the power chokes. It is made of black anodized aluminum with a silver, black, and red plate on top with the Gigabyte logo. 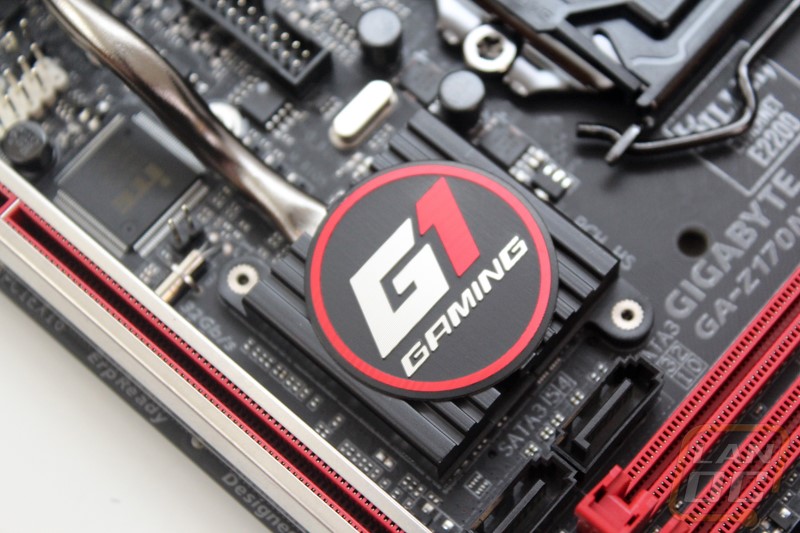 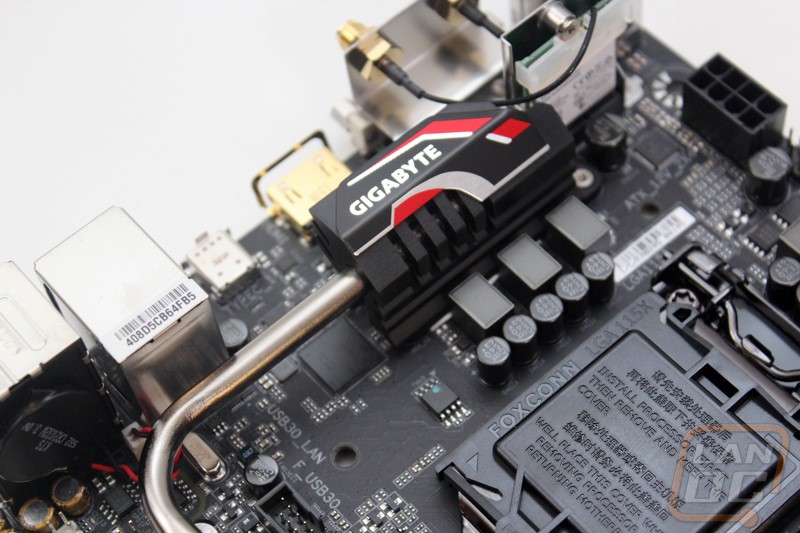 While the board is small let’s break things down into sections and check out what the Z170N Gaming 5 is all about. Starting up in the top left corner behind the rear I/O panel we have a few things going on. The most obvious is the CPU socket sitting in the center. Between the CPU socket and the I/O though Gigabyte slipped in an M.2 slot riser. This one comes with the wireless card attached. The wireless card runs up to Wireless AC in both 2.8 and 5 GHz. It also covers Bluetooth as well. Up above the CPU socket the board has a few connections starting with the 8-pin power connection. Next is the debug port that looks like a USB 2 header with one extra set of pins. Then of course there are two 4-pin fan headers to power the CPU cooler fan or fans. Of the two headers the main CPU fan header is distinguished with a bright white color. 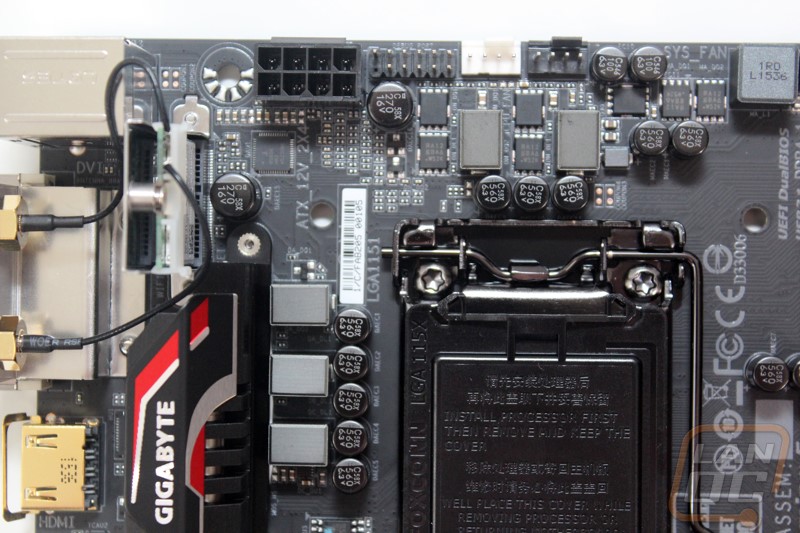 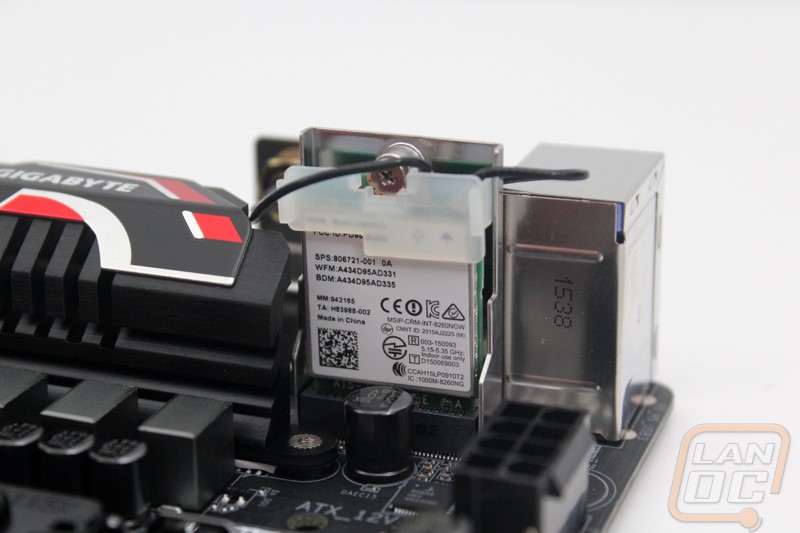 Moving around to the top right corner we have three things going on. First there are the two bright red DDR4 DIMM slots. Then there is the 24 pin motherboard power. Lastly just under the 24-pin power are the front panel connections. Gigabyte kept things simple and easy to hook up by color coding each connection and including polarity as well. 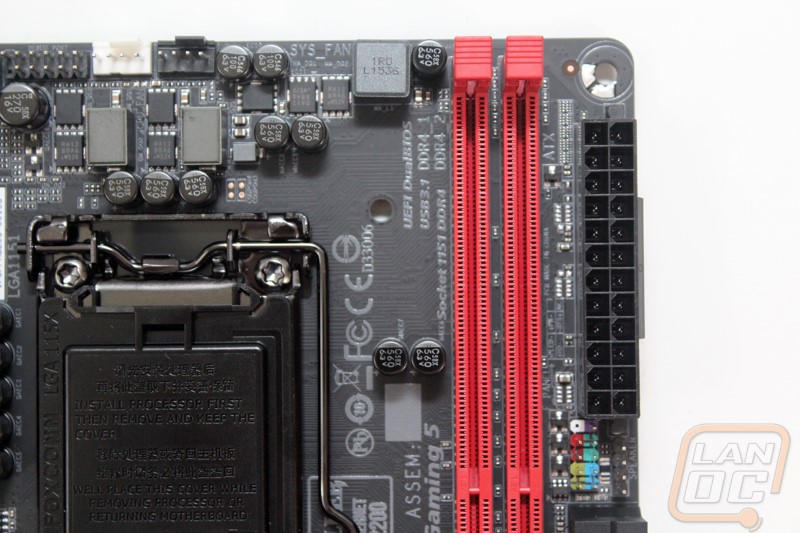 Down in the bottom right corner we start off with the SATA connections. We have to inward on the board that face up. Then there are also the two SATA Express connections that are right angled. The SATA Express connections can also double as four regular SATA connections if you aren’t using the Express functionality as well. If we look really close here we can also see a two pin header below the SATA express header. That small two pin header is the clear CMOS header, with this setup you can hook it up to a button if you plan on doing it often or use a screwdriver to touch it. Gigabyte included a jumper as well but they saved space by eliminating the third pin on the header where you would normally keep the jumper. 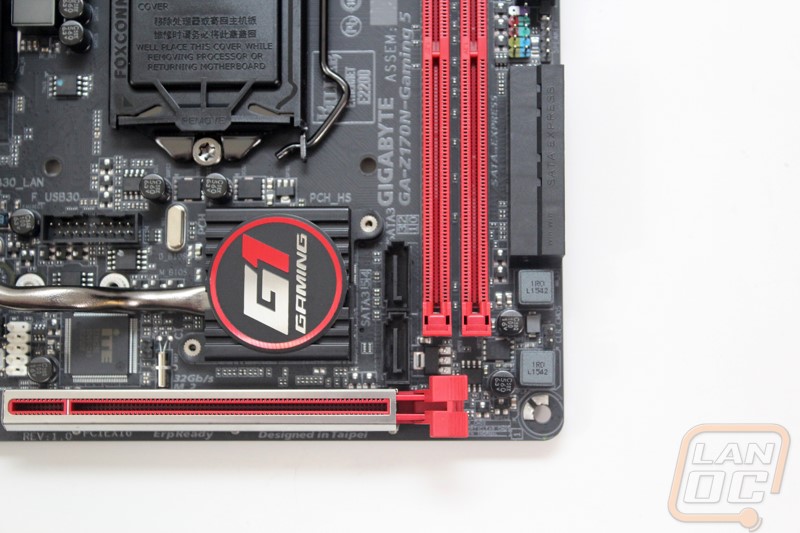 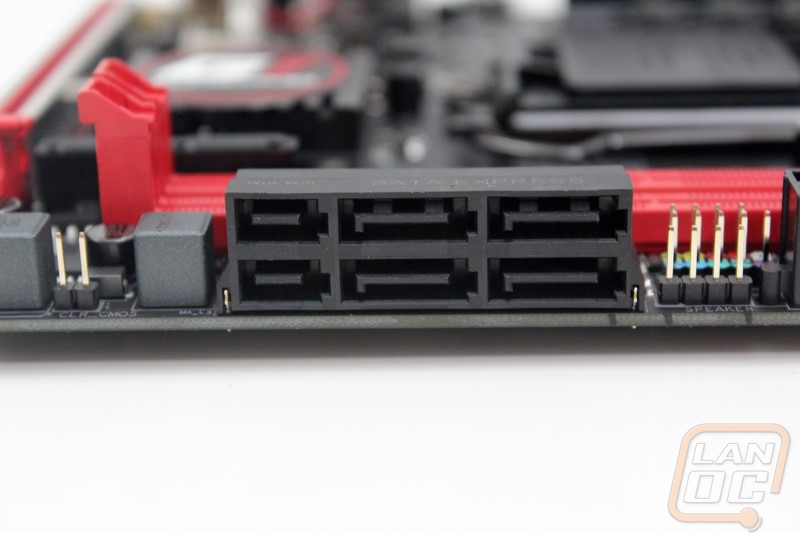 Last but not least we have the bottom left corner of the Z170N Gaming 5. Here we have a few things going on. The biggest is the PCIe x16 slot that runs across the entire bottom. They did use a red plastic to match the ram but Gigabyte reinforced the connection with a metal liner over the outside. We saw this on the full sized Gigabyte Z170 board and the MSI as well. This does a small amount of interference shielding and it also helps keep the slot strong should a heavy video card be putting strain on it. Also in the bottom left corner we have the boards only USB 3.0 connection sitting just above the heatpipe running between the heatsinks. Then tucked up behind the I/O panel is all of the audio circuitry. With that we have the front panel audio connection right up next to the audio caps and then the second white header that sits vertical is the boards only internal USB 2.0 header should you need one. 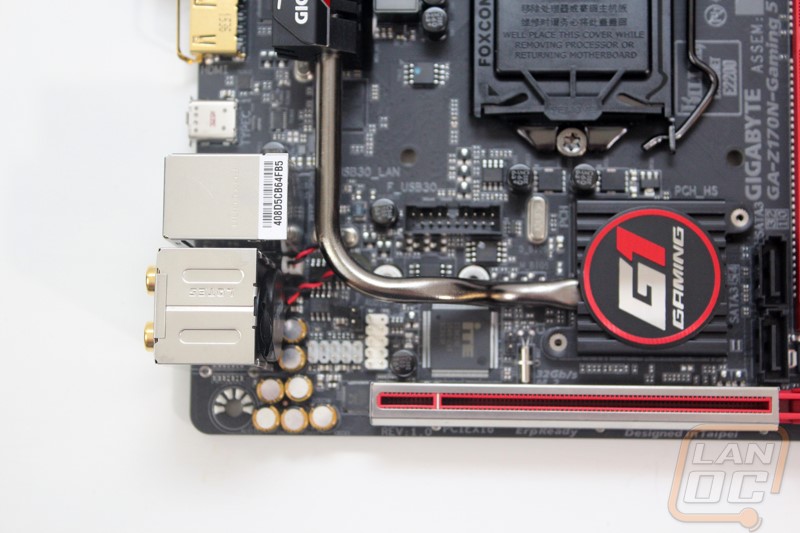 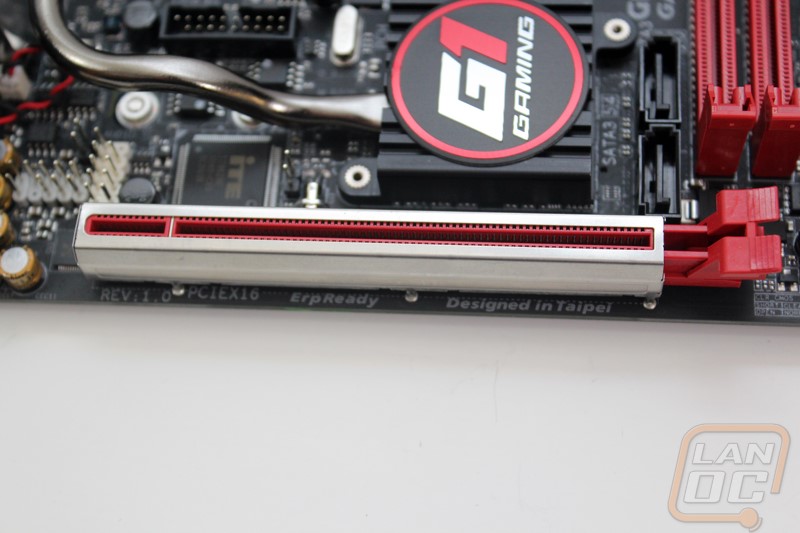 The funny thing about the rear I/O panel on a mini-ITX form factor is the I/O actually takes up the entire length of the board with the exception of the room for the single PCIe slot. This board comes with DVI and HDMI for video connections. Im a little surprised they didn’t also include a DisplayPort given there is room above the HDMI though. There is a single Ethernet port run off of a Killer E2201 controller. If wireless if your preference you have two antenna connections that hook to the wireless AC wireless network card. That same card also handles the bluetooth on the board as well. In wireless AC it can handle 2.8 and 5 GHz so there shouldn’t be a network it won’t work on. There are gold plated 7.1 audio ports running off the Realtek ALC1150 codec with support for Sound Blaster X-Fi MB3. Over on the left there is a PS2 port for hooking up your older keyboards and keyboard that support full NKRO over PS2. Then of course we are left with the USB connections. There are four normal USB ports, the three blue ports are USB 3.0 and the red supports USB 3.1. There is also the tiny USB 3.1 Type C port that should start to see a lot more use in the next year as everything slowly starts to move to it. 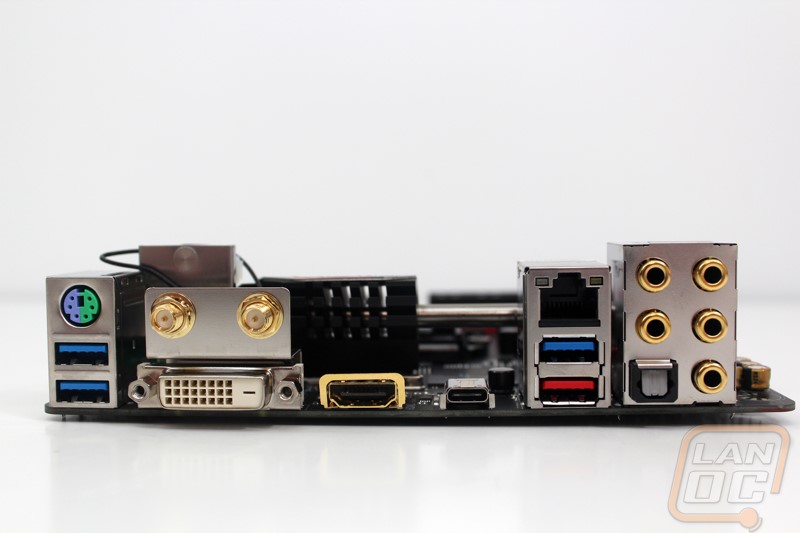 Normally on the back of a motherboard we are just checking out any mounting for cooling and getting a better look at the PCB. But with the Z170N Gaming 5, on top of the back finish on the PCB we also have an M.2 mount. This is because of the small size Gigabyte couldn’t actually fit a full sized M.2 up top. The slot supports an M key type 2260/2280. That means it supports SATA and PCIe with the PCIe being up to 4x. All of that means that if you want to go M.2 (and you should) you can go crazy with the fastest models. 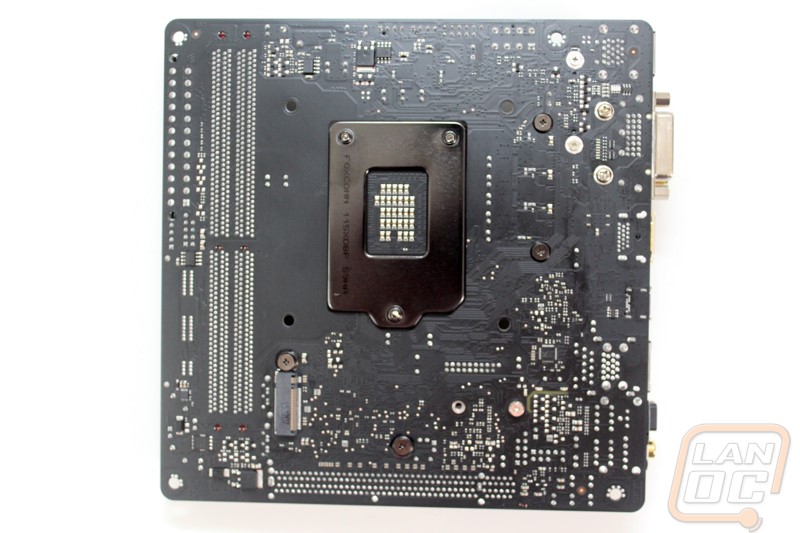 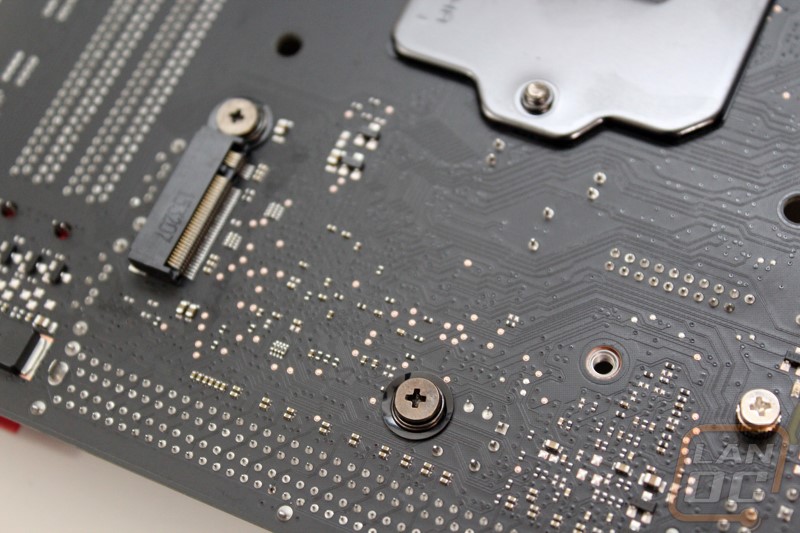