Gigabyte GA-Z170X-Gaming-7 - Board Layout and Pictures 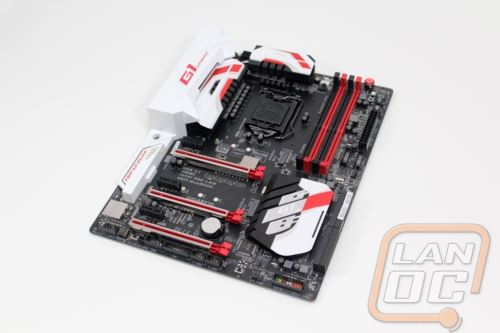 The styling of the Gaming 7 was interesting and stood out as soon as I pulled it out of the packaging. What I found the most interesting was that they seemed to mix up a few different styles and trends. Specifically they blended the blacked out PCB and plastic components with large white panels over a good portion of the board as well as on the cooling. This was then mixed in with the red that nearly everyone seems to use on their gaming boards now. The good thing is most builds will be able to find something that matches, the downside is the three color theme takes away from the clean styling that a lot of people are going for now. Personally I would have preferred them to go all white and black or drop the white and replace it with more black or even more red. 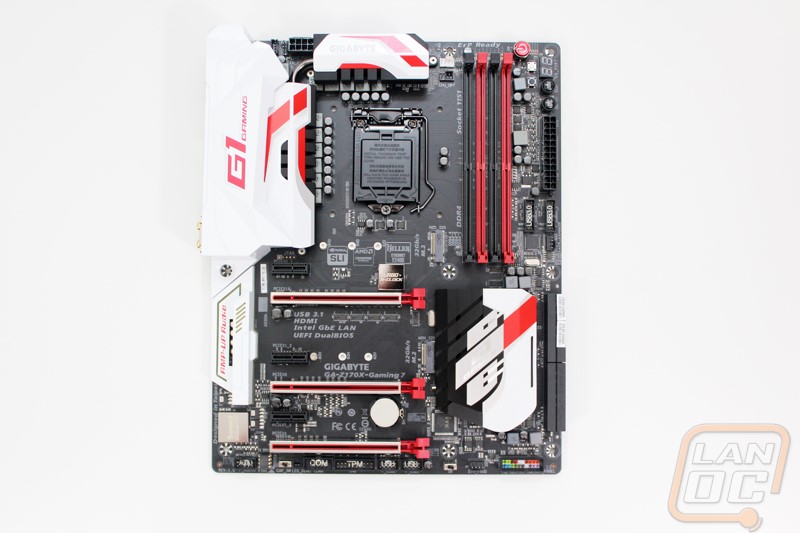 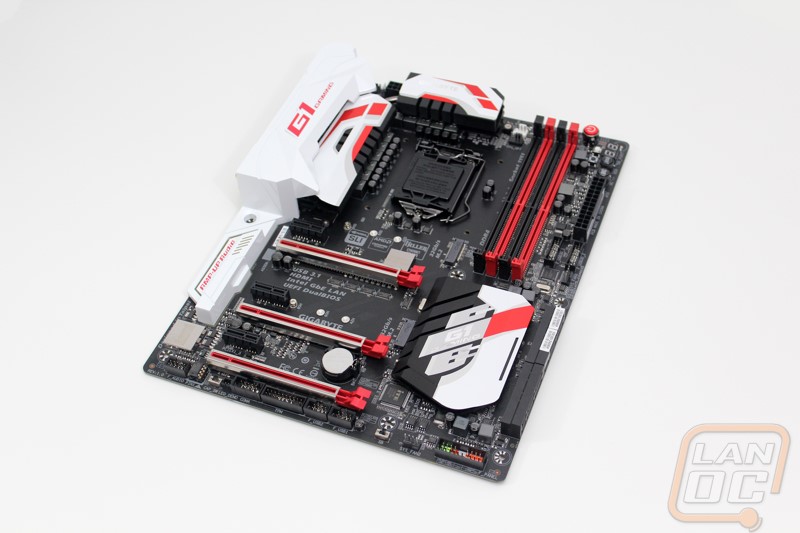 For cooling the Gaming 7 has two large heatsinks around the CPU that help keep the chokes and power circuitry cool. The base heatsinks are thick and black aluminum with a short heatpipe that connects the two. On top of them are the red and white panels to match the rest of the red and white. They don’t have an excessive amount of fits but you can see a few small fits facing the CPU in the photo below. For the Z170 chipset Gigabyte uses a thin heatsink next to the PCI slots. This makes sure it doesn’t get in the way of the video cards and other long cards. They didn’t connect this heatsink with the other two though, given the location in their product line I would have expected it, but obviously there is enough cooling to keep the chipset cool. 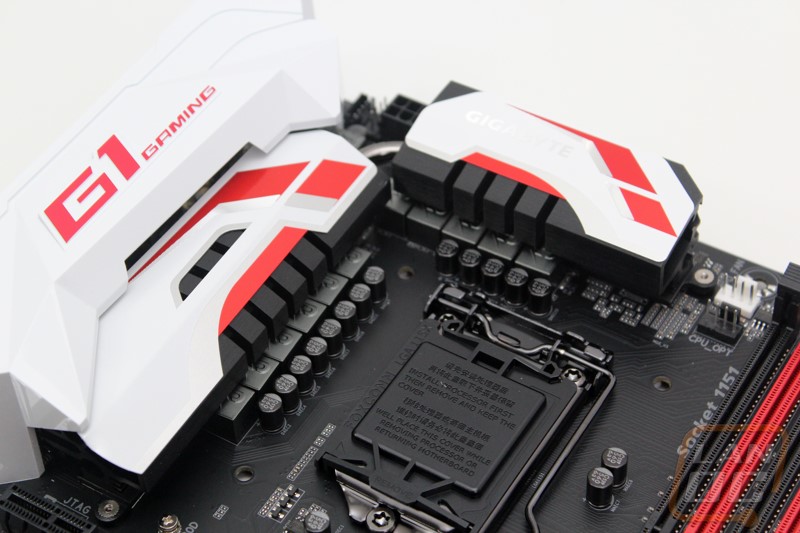 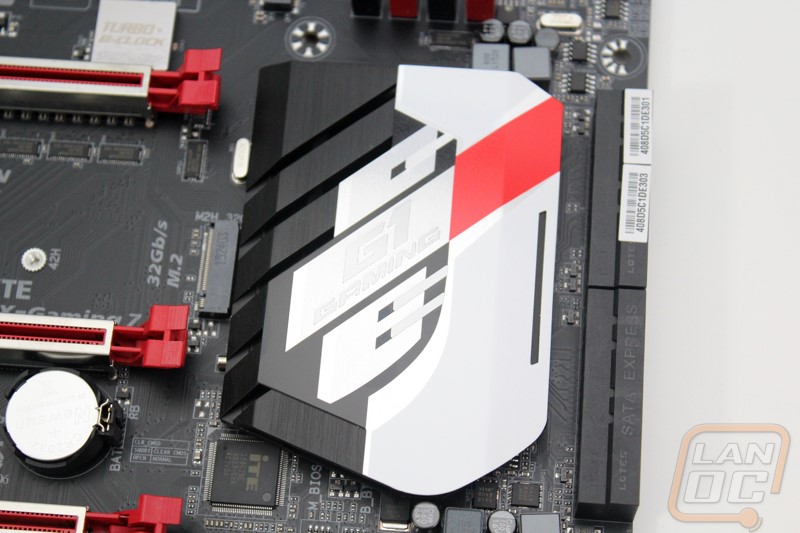 Now to take a peek at the features around the board we take a closer look at each section starting up in the top left corner. Here the white plastic panel that covers the rear I/O panel covers up all of the space between the rear I/O and the left heatsink so there isnt any room for anything there. This made things a little tighter for everything else so up along the top edge we have the 8 pin CPU power as well as a four pin fan header tucked in. There are two 4 pin PWM fan headers to the right of the CPU socket, the white one is the primary CPU fan but the second is there for heatsinks with two fans. 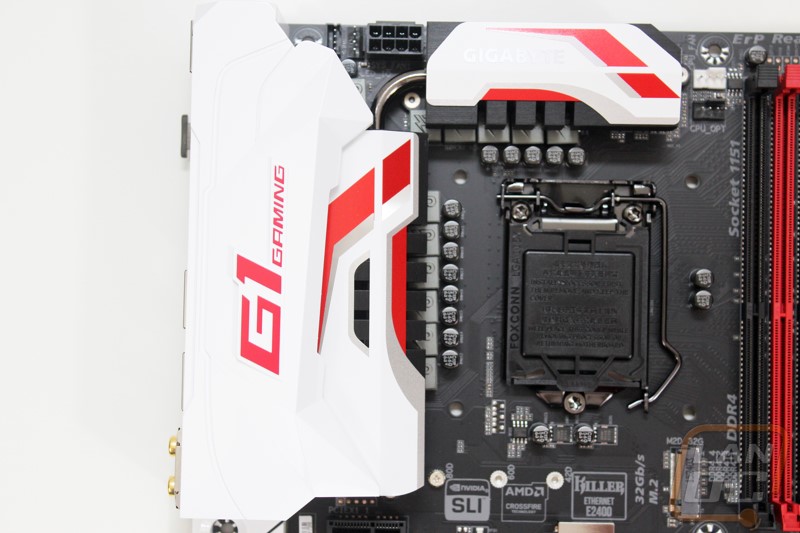 On the top right we have the four DDR4 DIMMS in alternating red and black. Just past that up in the top corner are a few buttons. The biggest is the large red power button but just below it is a small rest button and CMOS button. In this corner I wasn’t impressed at all with the overall build quality of the board when I can see things mounted clearly out of the lines that they drew for them. There is a nice LED trouble code readout as well as OC and ECO buttons. Below those buttons we have the 24 pin power connection and then Gigabyte slipped in two USB 3.0 headers. Most boards still only have one USB 3.0 header so it is nice to see that the Gaming 7 has two in addition to rear I/O connections. Lastly in this section we have another four pin PWM fan header just below the USB 3.0 headers giving us a total of four so far. 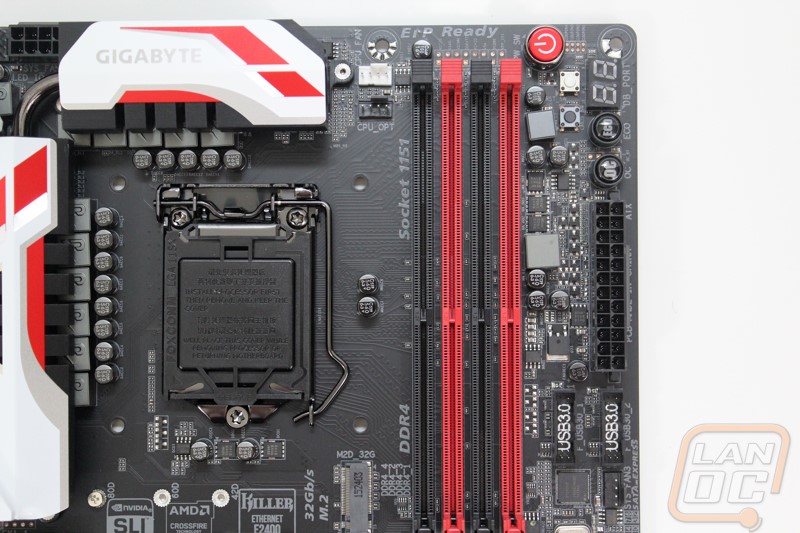 Down in the bottom right corner next to the chipset heatsink we have the SATA/SATA Express ports. All of them are right angled for clean wiring. Between the two clusters you get three SATA Express ports and then an additional two SATA 3 ports. If you don’t need the SATA Express ports just yet you can use the individual ports to get a total of eight SATA ports. Down below the heatsink and SATA ports we can see another twisted choke. In the corner is the front panel connection header that has labels on the PCB as well as color coded areas inside of the plug to help you get everything hooked up. We have a fifth 4-Pin PWM fan header then two USB 2.0 ports next to the TPM and COM headers. There is a small switch to turn on “Single BIOS”. Down in the bottom right corner just above the front panel header they also slipped in a tiny two pin header to clear the CMOS with as well. 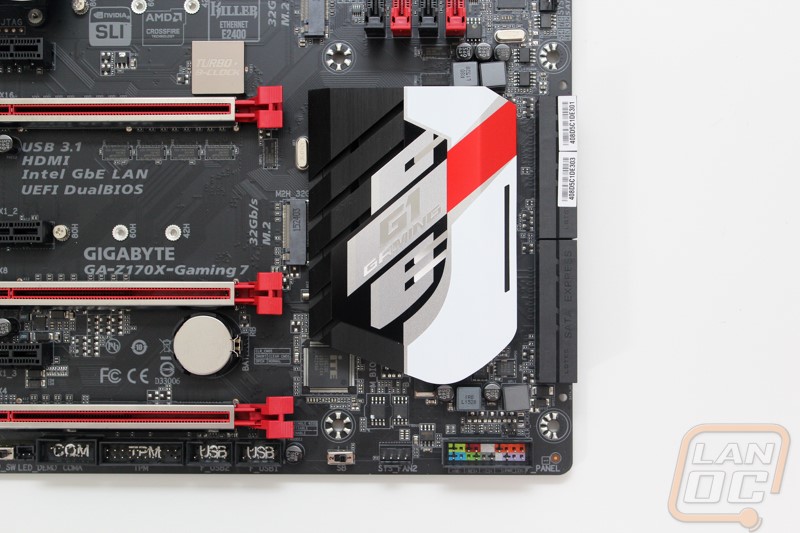 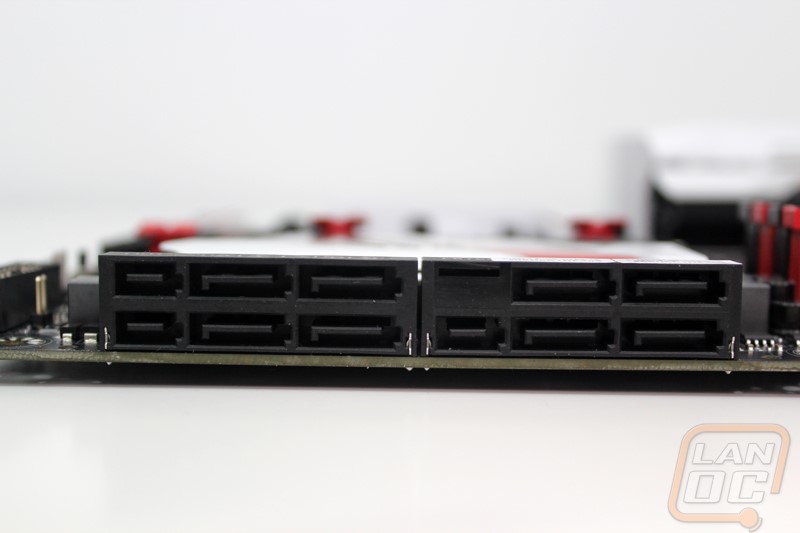 The rest of the bottom edge has a small LED demo header. The Cap_SW switch is actually for the build in audio card. This turns on a gain boost for high impedance speakers and headphones. You can select between the standard 2.5x or the 6x high amplification mode. The chip next to that switch is an upgradable OP-AMP, audiophiles can replace this to change the sound of the amp, this is the first time that I have ever seen this on a motherboard but I welcome the addition as it shows that they are working on improving the build in audio quality even more. The last header in the bottom left corner is the front panel audio connection, no big shocker there given everything else it is sitting with. 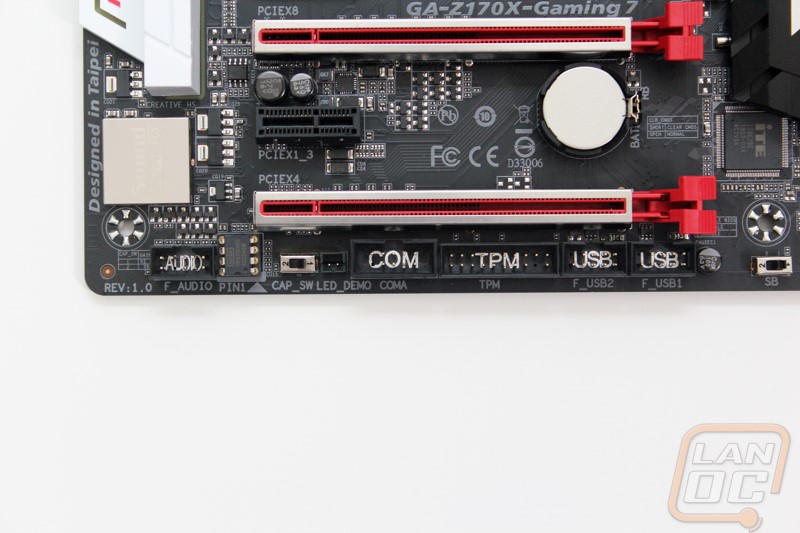 You can hardly see it in this photo but in addition to the six different PCI slots the Gaming 7 also has two M.2 connectors in between them as well. This means you can hook up more than one M.2 SSD or device. Paired with all of the SATA Express ports you really should be all set. For PCI slots we get three full length PCI Express x16 slots, you also get three PCIe x1 slots. Due to the limited CPU lanes though there are a few stipulations. For starters the bottom x16 length slot is actually only a x4 slot, in addition to that it shares bandwidth with the bottom M.2 slot so if you end up using that you can’t use the bottom PCIe slot. The top slot runs at a full x16 if you are running just one card and if you use a second it and the second x16 slot will share the bandwidth and both run at x8 each. It’s a little disappointing that all of the features on the Gaming 7 can’t be used at the same time but this is a limitation of building on the consumer level chipset, the enthusiast X99 chipset has the additional CPU lanes needed. Each of the x16 slots also comes with a metal casing around it for less interference. This isn’t something I had seen previous to the Z170 launch but MSI did have this as well on the board I covered at launch. 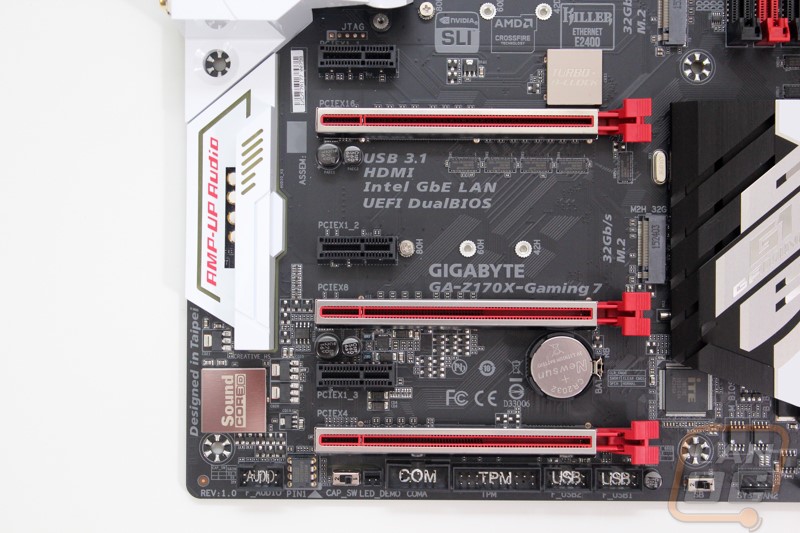 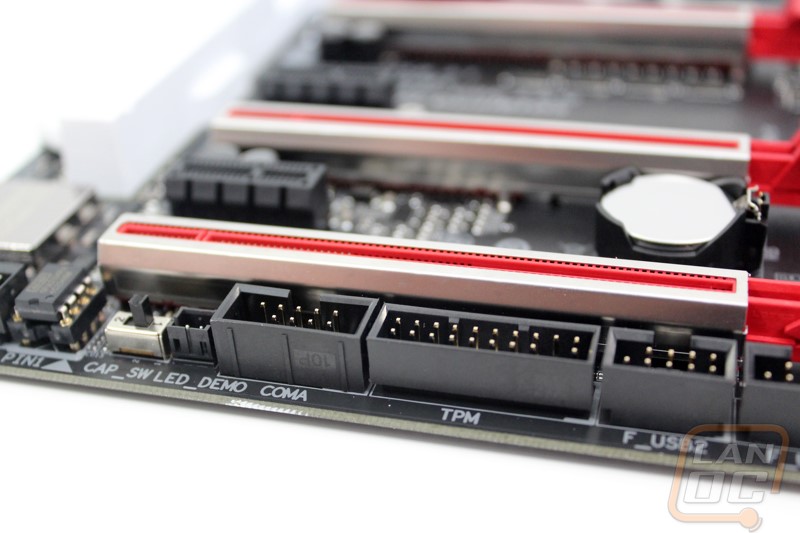 So for the audio card I kind of hinted at things before when mentioning the switch for turning the gain up as well as the replicable OP-AMP. The rest of the sound card is actually covered up with the plastic cover but we do know what is inside. Gigabyte worked with Creative Labs to get their SoundCore™ 3D Gaming Audio on the Gaming 7. This includes high end Nichicon MUSE MW Audio Caps and a quad core audio processor. It also means you get all of the Creative tuning software in windows to control the sound as well. 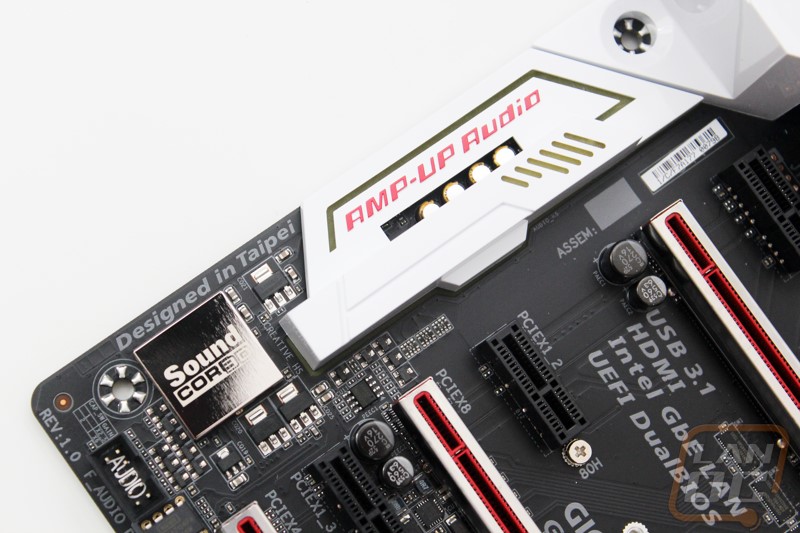 Before diving into the connections available, I wanted to point out that this is the first time that I’ve ever seen gold visible on the outside of a rear I/O panel, specifically in the audio connections and display connections, normally it is only used on the contact areas because it prevents corrosion. Going with it on the outside here is a little wasteful. For to start things off, over on the left we have two USB connections along with a PS2 port for your old school mouse or keyboard. Next we have a full sized DisplayPort as well as an HDMI for display connection options. From there we have two more USB ports, this time USB 3. You get two Ethernet options and below those we have two more USB 3.0 ports as well as a new universal C type USB 3.1 port. Then down at the end there is a standard 5 plug audio configuration with an optical connection in the 6th spot. 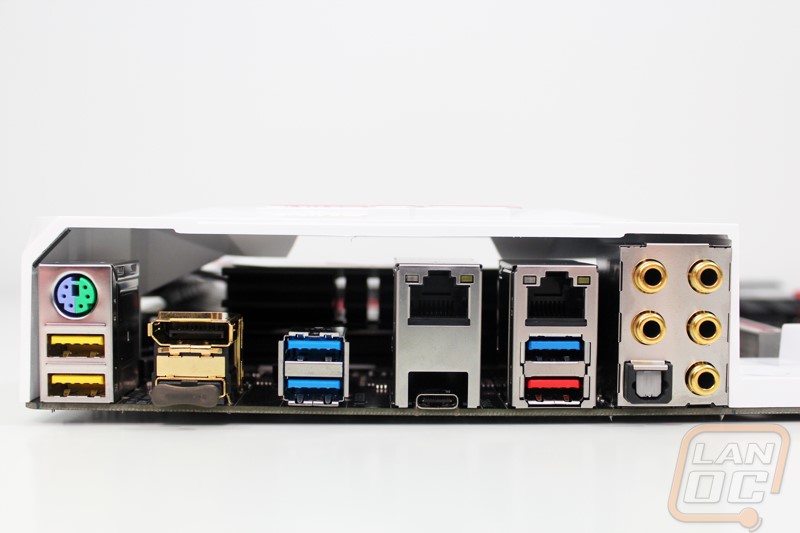 The back of the Z170X Gaming 7 keeps things simple. Here we can see the flat black PCB. What I did find really interesting here though is we can clearly see that the resin line in the PCB meant to split the audio card from the rest of the board for better noise isolation doesn’t actually split it apart at all, it just runs down the side but the top and bottom are still connected. We can also see the surface mounted LEDs in the same area that Gigabyte lets you control in their software. 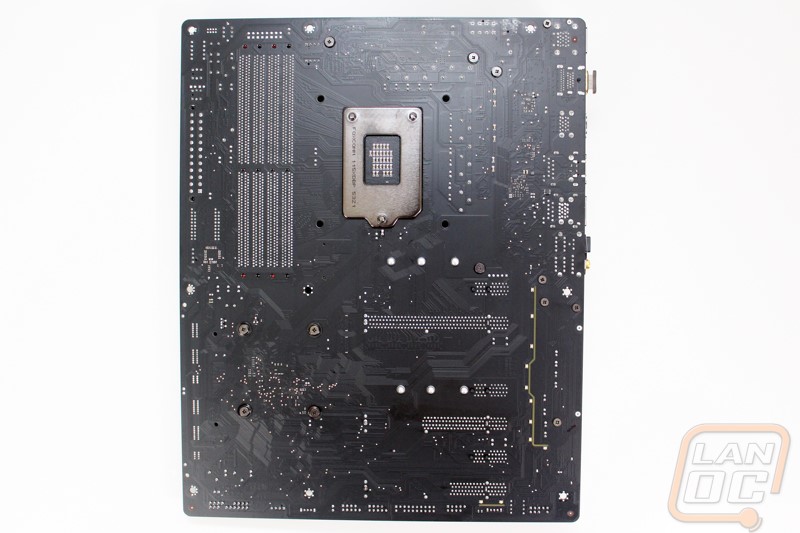 garfi3ld replied the topic: #37254 23 Sep 2015 23:29
The LAN hangover is over, I've finished up all of my post event work and its finally time to start cranking out my writing again. To start things off I take a look at another Z170 motherboard, this time from Gigabyte. Check it out!
Read More...

We have 1457 guests and no members online