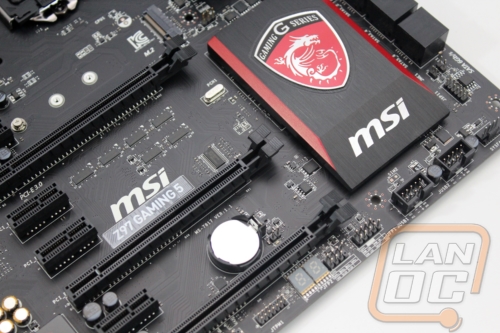 MSI stuck with the same red and black theme for the Gaming 5 but it is very clear that this is a much cleaner design both on the PCB as well as the cooling design. I have a feeling that this is going to be a little more popular than the previous generation of MSI gaming boards where the dragon theme was a little more in your face. The overall layout of the board isn’t any different than past boards, but lets break it down section by section. 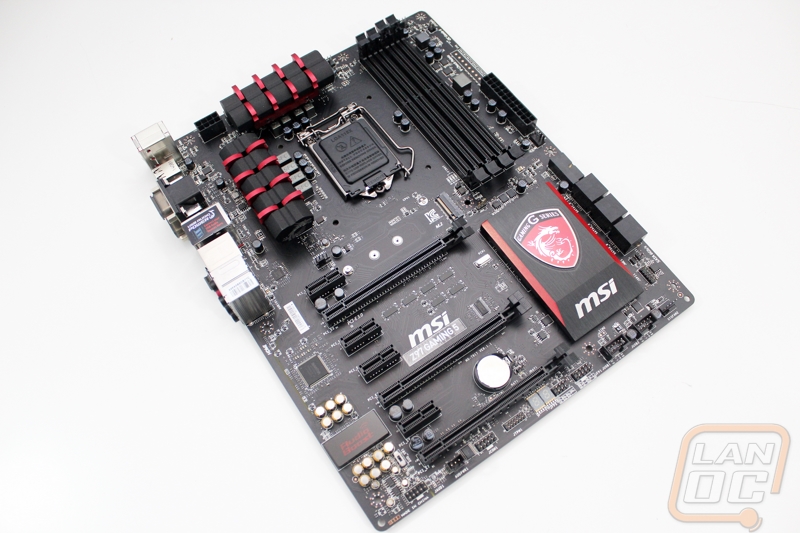 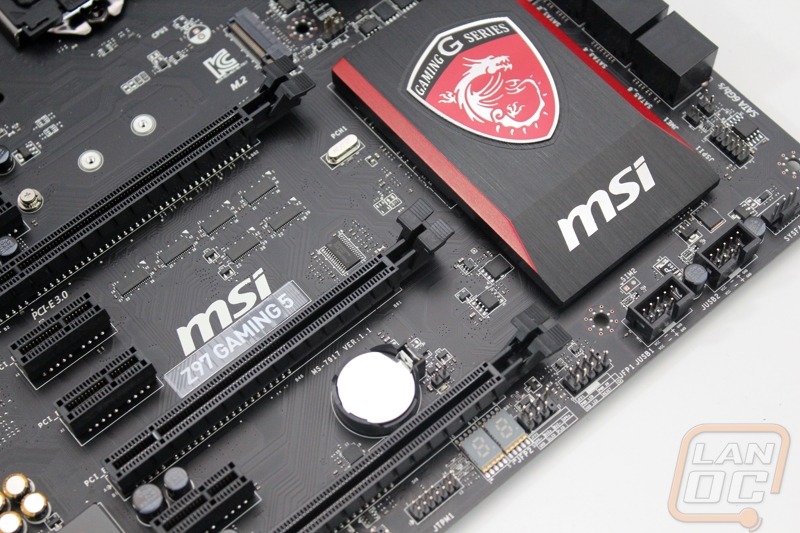 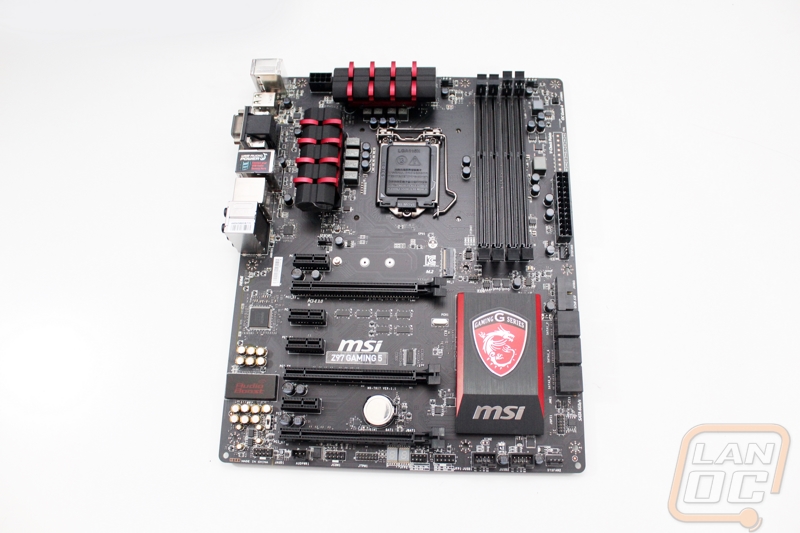 Starting up in the top left corner behind the rear I/O panel the Gaming 5 has a single 8 pin power connection. Surprisingly there isn’t anything else going on up in this corner other than the rear I/O and the cooling that will both be covered later on this page. 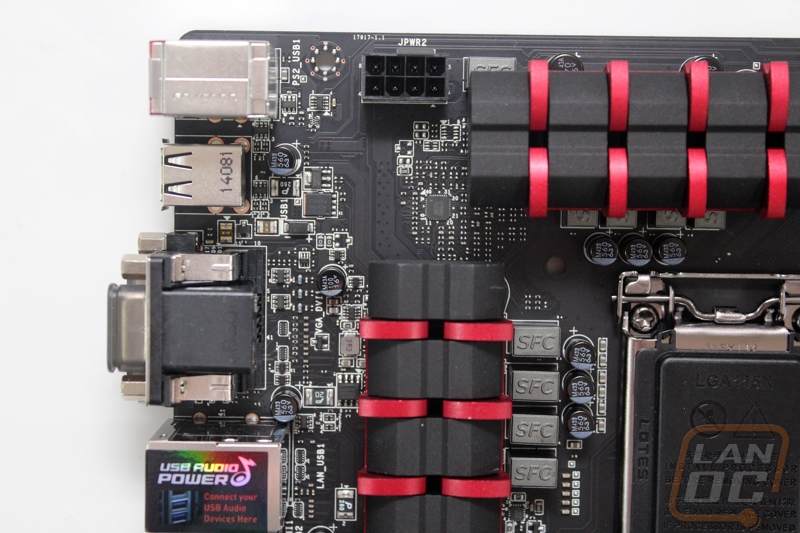 Moving over to the top right corner, we have a lot more going on. MSI went with a standard CPU hold down. The area around the CPU is fairly clear of anything that will cause obstructions with low profile coolers or their brackets. In this photo we have three four pin PWM fan headers, two are up top for CPU fans and the third is a case fan. Just like Z87 we get four DDR3 DIMM slots that support up to a whopping 3300MHz. MSI blacked out all four of the DIMM slots to go with the black PCB. Over along the right edge we have the 24-pin power connection and just above it 9 voltage pads for overclockers to be able to keep a close eye on their voltages. Lastly, in the bottom left corner we have a peak at the M.2 connection that is just at the top of the PCI Express slots. M.2 is a small form factor implementation of the SATA Express interface and the replacement for mSATA. With this connection, you can add a small PCB that will give you a SATA Express connection or you can connect M.2 SSD’s. If you don’t know what SATA Express is, it is the latest in connection type that combines two SATA 3 ports along with a third smaller port to increase overall data transfer up to 10 Gb/s, exactly what we will need to break past the performance of our current day SSD’s. 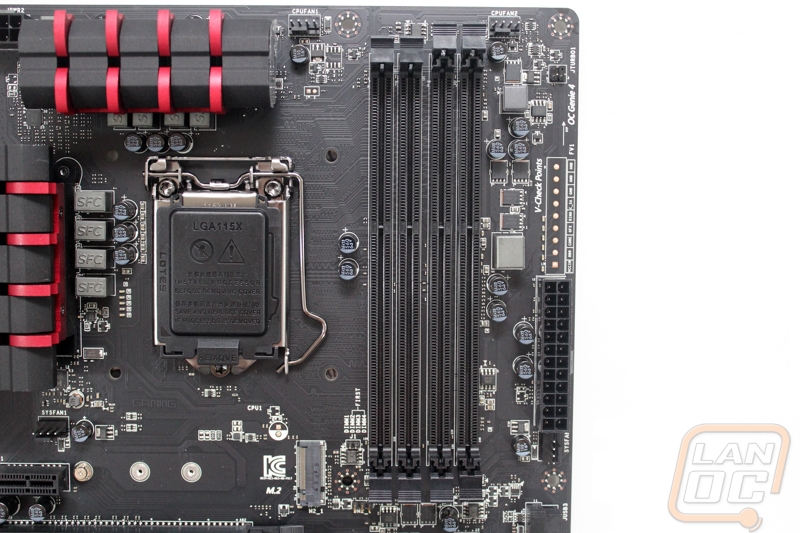 Down in the bottom right corner of the Gaming 5 we have a lot going on. Starting on the top right just below the 24-pin and case fan header mentioned on the previous picture, we have a right angle USB 3.0 header. Anyone who has built a computer with USB 3.0 that has tried to keep that plug from coming unplugged while trying to have good wire management will understand how much it will help having it be right angled. Below that, you have 6 SATA 3 connections that are also right angled. Along the bottom, we can add a fourth 4 pin PWM fan header to our list as well as two USB 2.0 headers for lower speed USB requirements. Next, you have the front panel connections then an LED readout for troubleshooting. 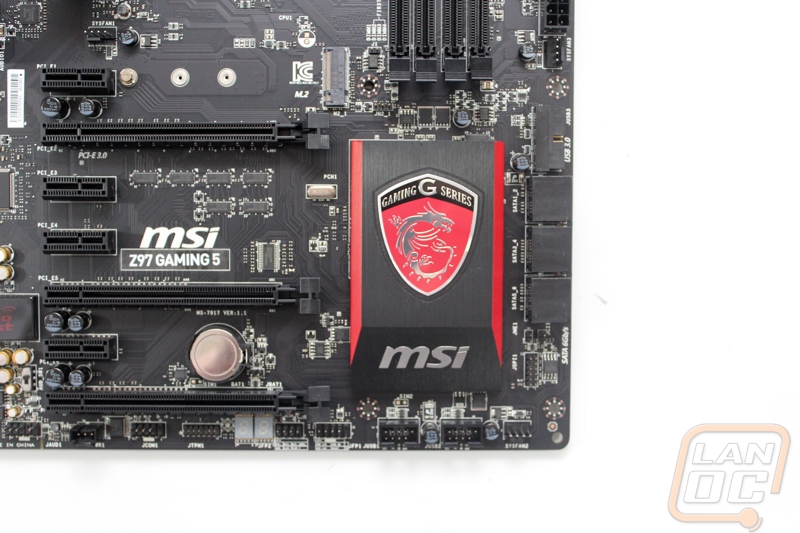 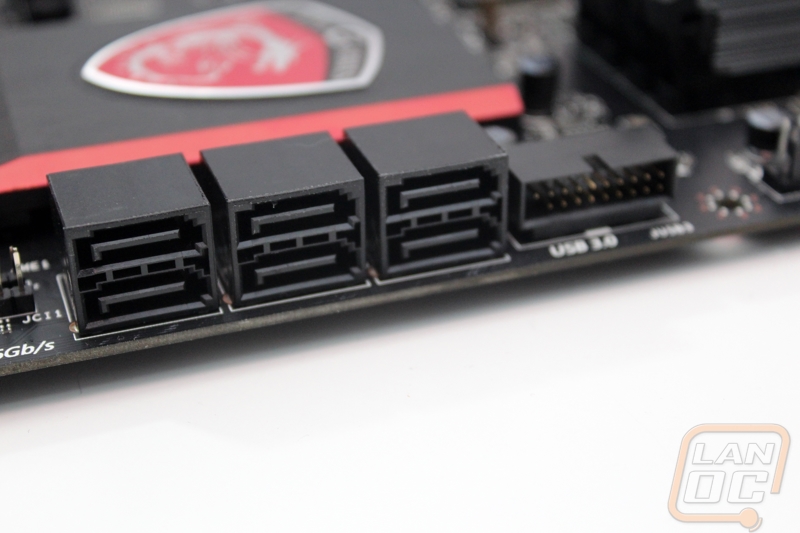 The bottom left corner of the Gaming 5 is (aside from the PCI Express slots) taken up completely by the sound card. Over on the left side you can see all of the capacitors as well as the light up Audio Boost pad that was also on the Z87 boards. MSI did make a few changes though and they actually are calling it Audio Boost 2 even though the logo on the board doesn’t show that. They have isolated the audio PCB (like on the MPower last year and Asus’s motherboards before that) to give the clearest audio signal. Down along the bottom next to the front panel audio connection you also have a small audio power plug that is used with the Molex adapter that I mentioned in the packaging section. This adapter helps feed additional power into the audio card to provide more stable power and power to push the dual headphone amplifiers. 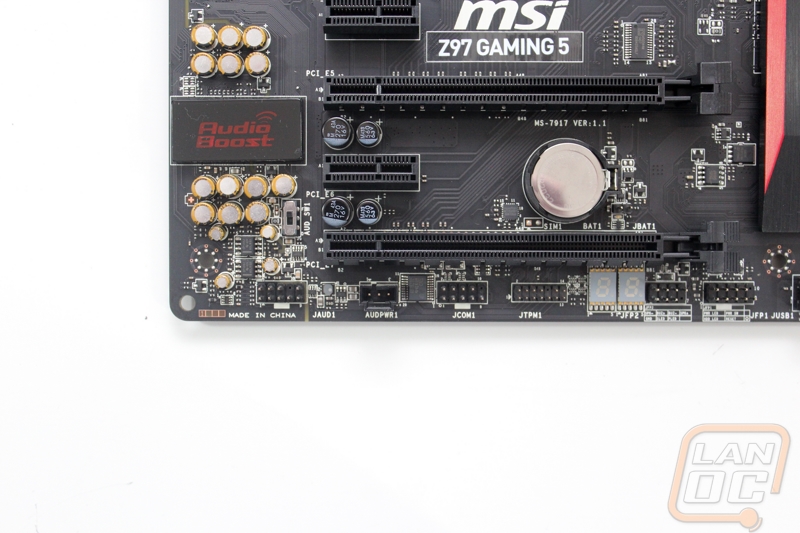 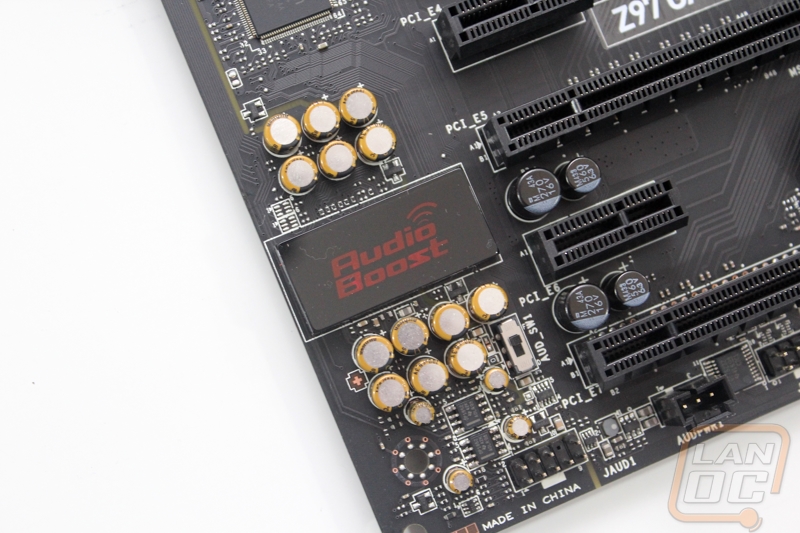 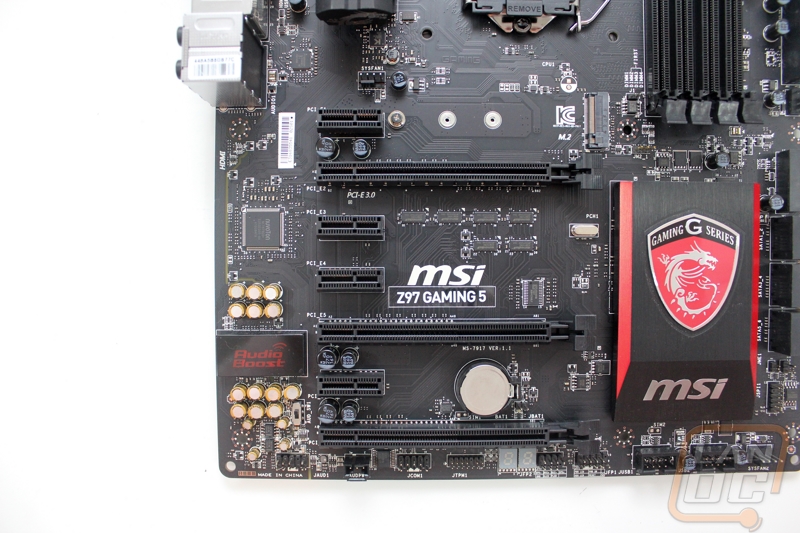 For the rear I/O panel I was surprised to see that the standard 6 panel audio connections are all blacked out other than a single red plug. They were able to go without the color codes because the rear I/O panel has small red markings that label each connection. The red plug helps you see the dedicated headphone out that takes advantage of their new Audio Boost 2 feature that amplifies your headphone power. The two red ports are USB 2.0 but are special being the dedicated gaming device ports. These ports (including the ps2 port) have triple gold plated connections to prevent any issues if this board is used in a tournament or gaming house where the mouse and keyboard get unplugged all of the time. The two left USB 3.0 ports are the ports that get extra power for your USB audio devices, they aren’t labeled on the outside here but it is marked on the I/O panel.

For video connections, you do get DVI, VGA, and HDMI, but with this being a gaming board I doubt they will get much use. Most people will want to run a dedicated video card. The last connection is that red network connection. MSI once again went with a killer network card for its QOS functionality. In the past I haven’t been a fan of the killer NICs due to weird quirks that they sometimes have, but the QOS software is always welcomed. 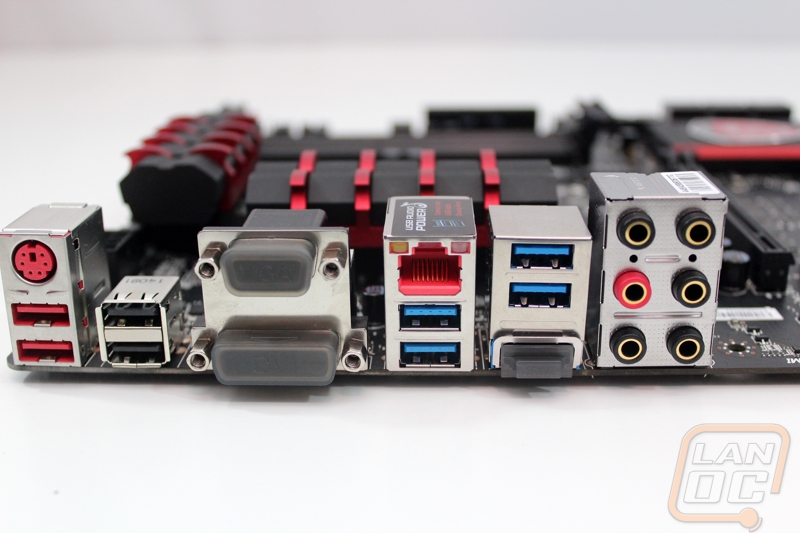 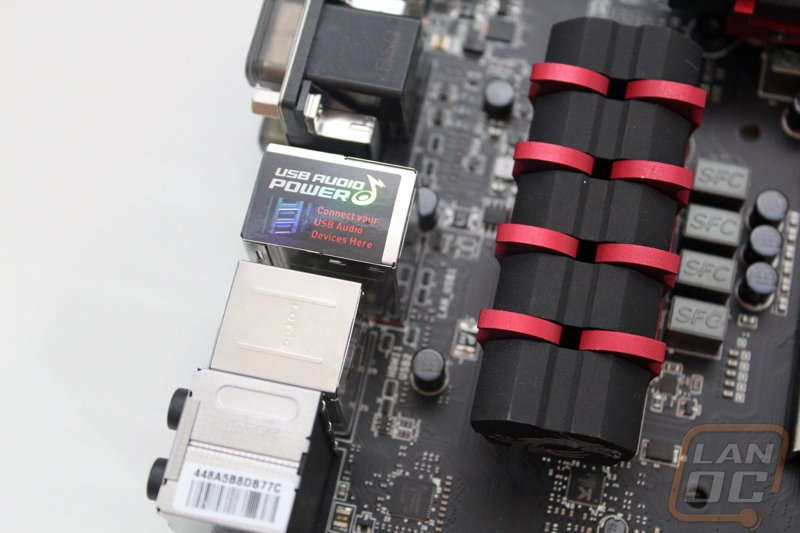 On the back of the Gaming 5 we have a better look at the black PCB. We can see that they did the same thing that I loved so much with the Z87 MPower boards where they hid all of the required logos around on the back to keep the board clean on the visible side. This was a bit of a surprise because I thought for sure that people would be upset at MSI’s workaround. For USB connections you get four USB 3.0 ports over on the right side as well as four more USB 2.0 ports. 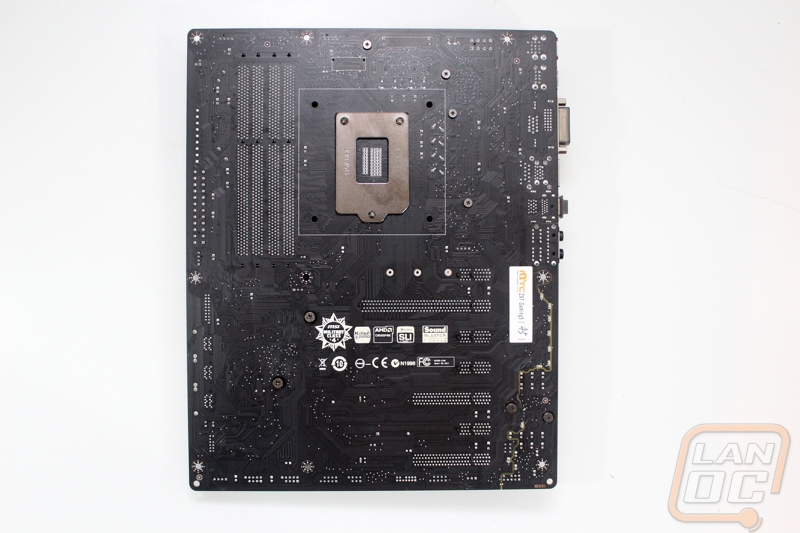 One of the biggest changes to the aesthetics of the Z97 Gaming 5 from previous MSI gaming motherboards is the new cooling design. The previous design was really interesting with each heatsink shaped as a dragon from the side point of view. MSI did keep the dragon on the side of each of the heatsinks, but this time around they downplayed the dragons with a more general heatsink design. The new design is black with that looks like red claws coming out every half inch. The design itself doesn’t have a lot of fins but with most of the power voltage regulation being handled on the CPU this should be more than enough to keep things cool. Down in the bottom right corner of the board the chipset is kept cool with a low profile black heatsink with the MSI Gaming logo on top. It is a simple design, but gets the job done and is in line with all but the highest end overclocking motherboards. 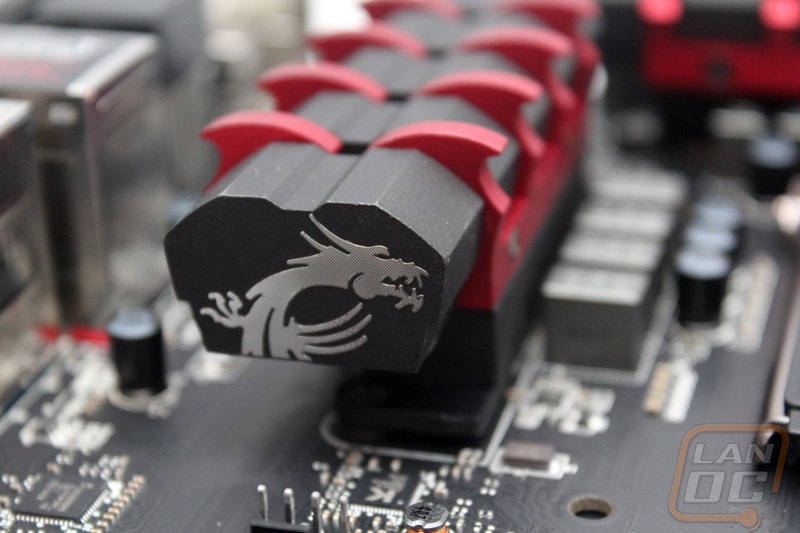 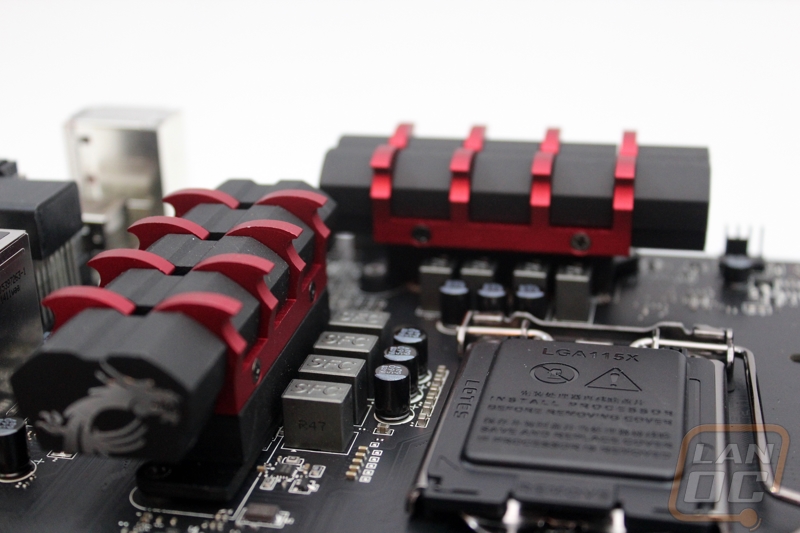 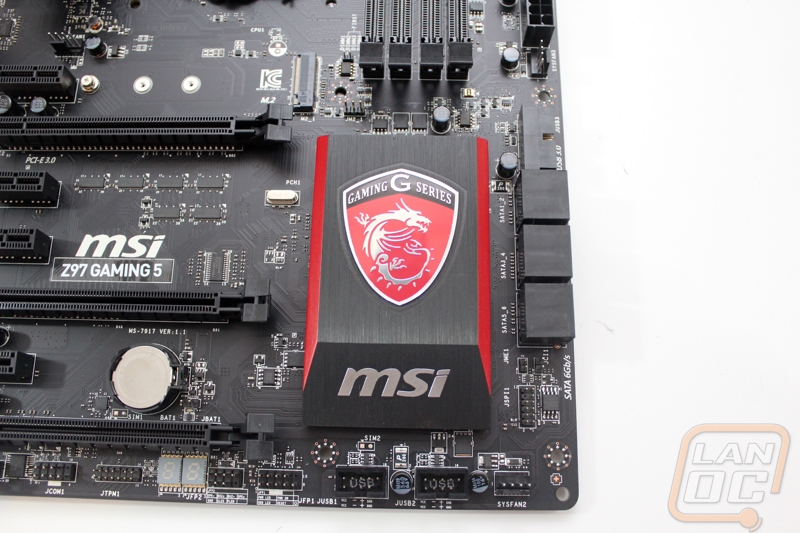 We have 633 guests and one member online