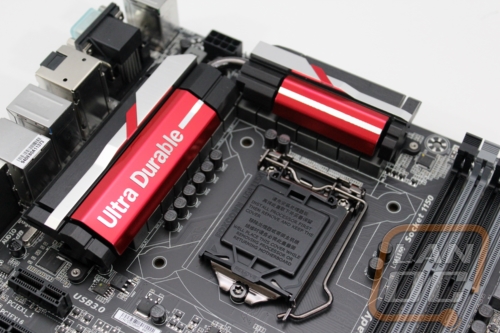 It seems nearly every motherboard manufacturer took the chance to change things up slightly when it came time for the Haswell launch. I didn’t have a chance to check out a board from Gigabyte at the launch but I did get one in recently, specifically their Z87X-UD4H. It’s not their highest end board, nor is it entry level. It should give us a good idea of what to expect from Gigabyte on the Z87 platform without breaking the bank. With its red styling, you can’t say it’s not a little eye catching, that’s for sure!

The packaging for the UD4H is a little cleaner than previous Gigabyte boards that we have had in. There is a large photo of the boards cooling across the top and Gigabyte color matched the board’s model number on the top to match the red on the board as well. Along the bottom there are 5 of the board’s key features with the Ultra Durable 5 plus logo taking precedence. 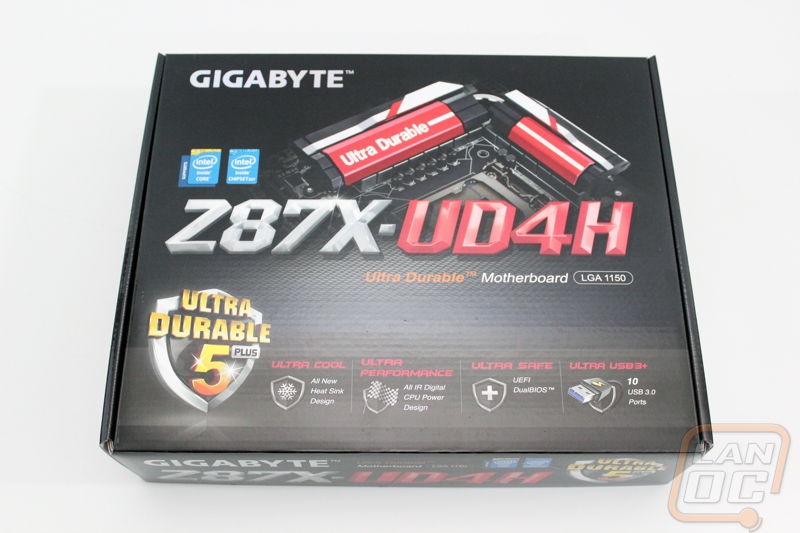 Inside the box, along with the motherboard itself, you have all of the documentation and accessories tucked in up under the board. For documentation you will get an installation guidebook and a larger user manual as well. They also include a Gigabyte case badge along with the driver and software disc. For accessories, you get what you would normally find with a mid-range motherboard. That includes four black SATA cables and a black SLI bridge. You of course also have the rear I/O panel; this is also black with each connection being color coded as well. I love that Gigabyte went with all black for their accessories; it’s a small touch but makes a big difference in putting together a clean build. 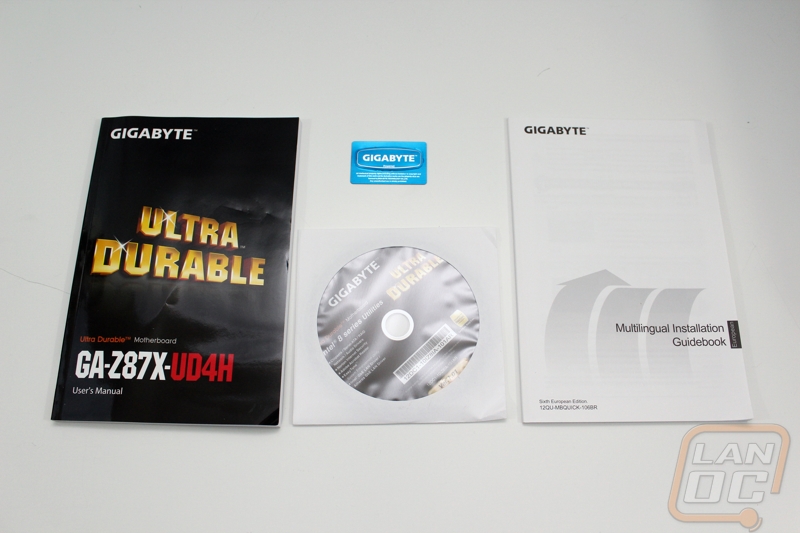 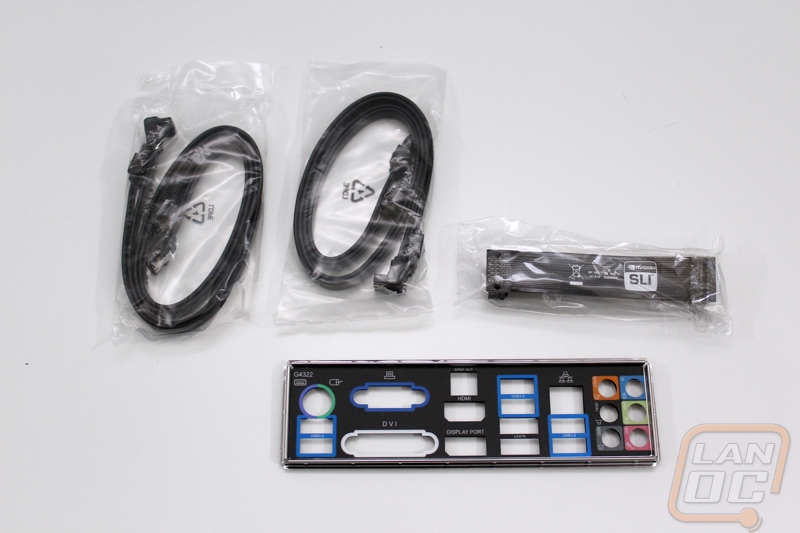 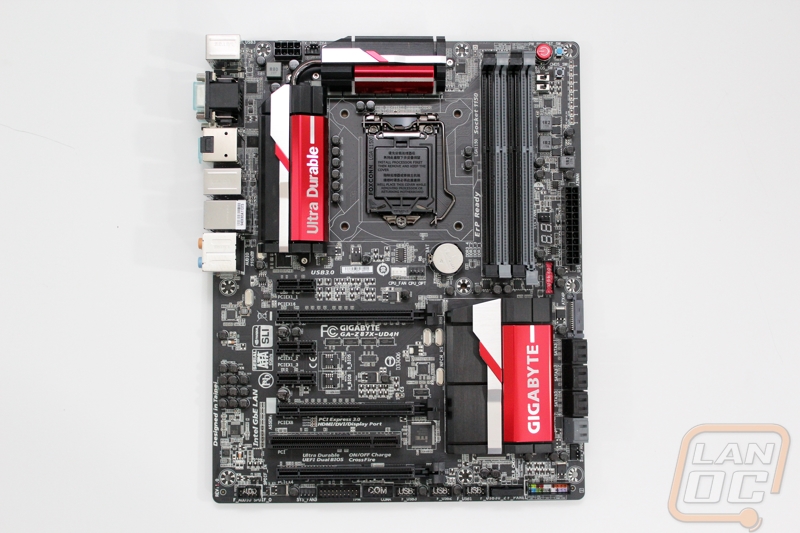 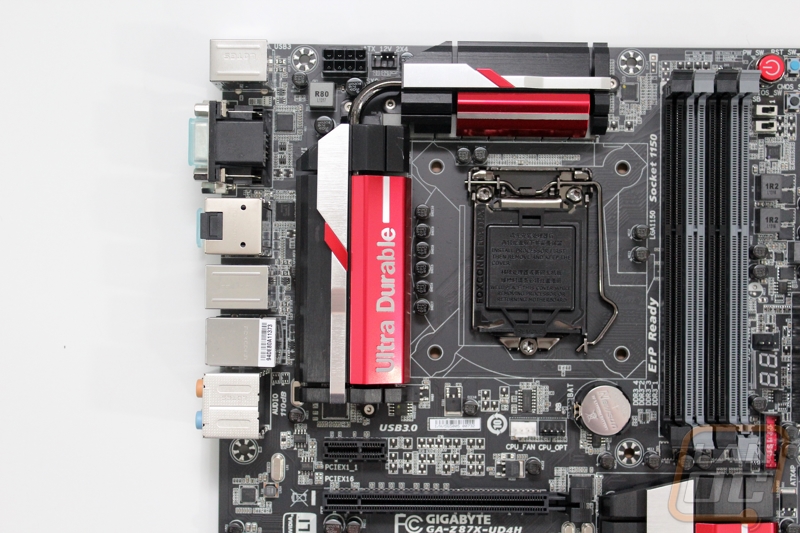 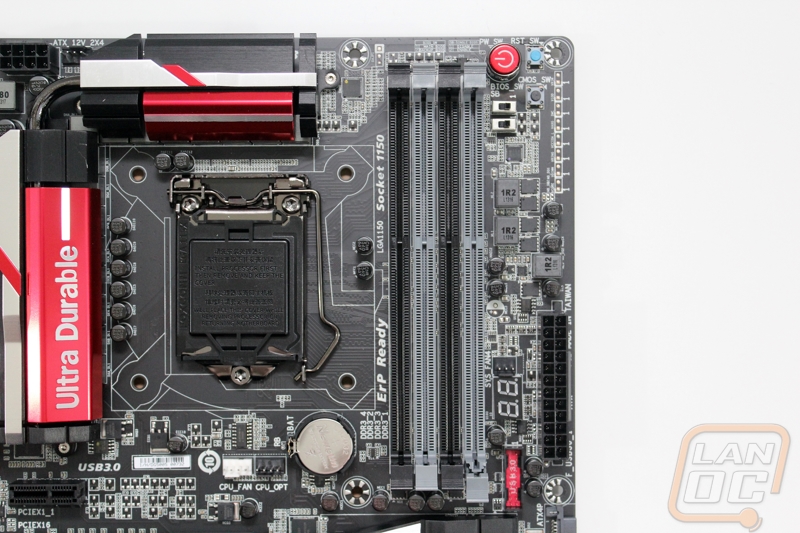 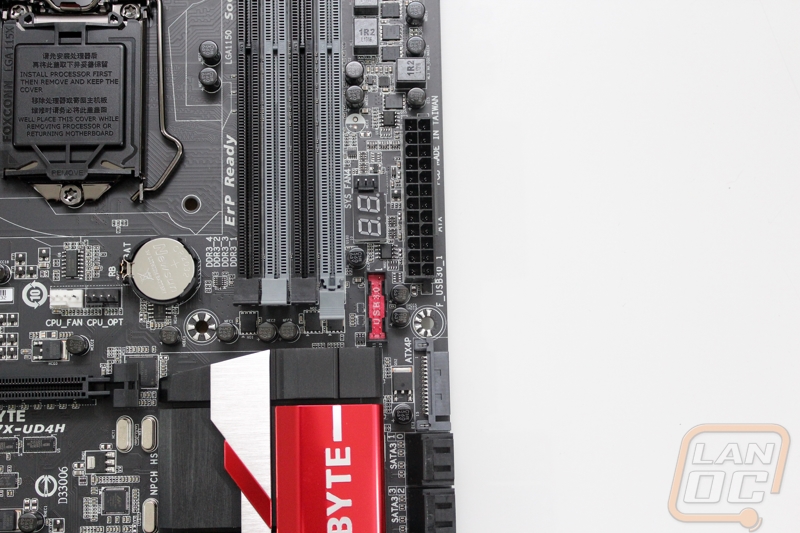 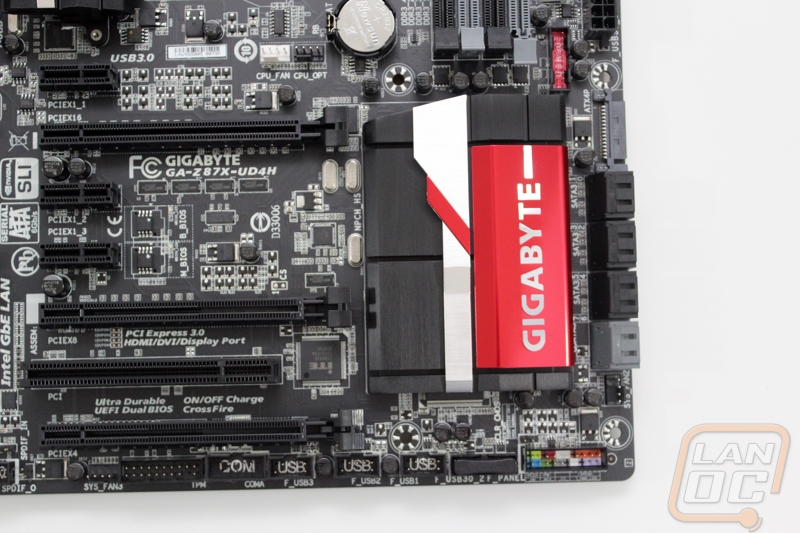 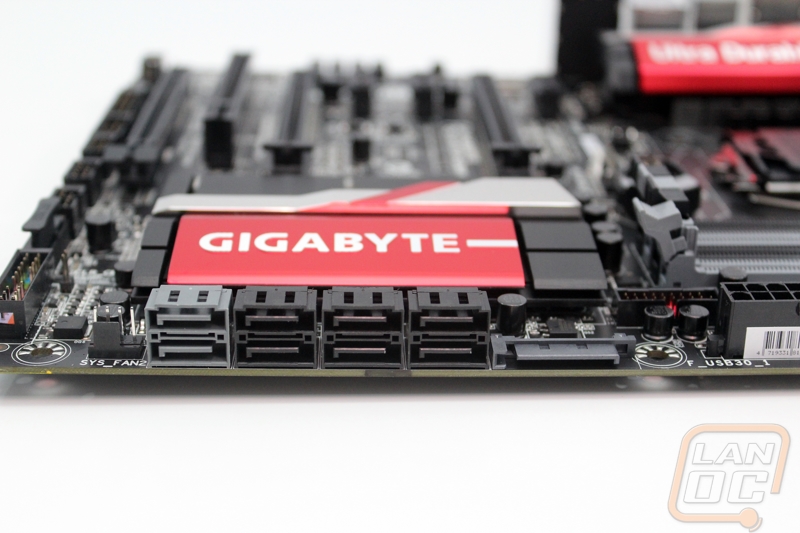 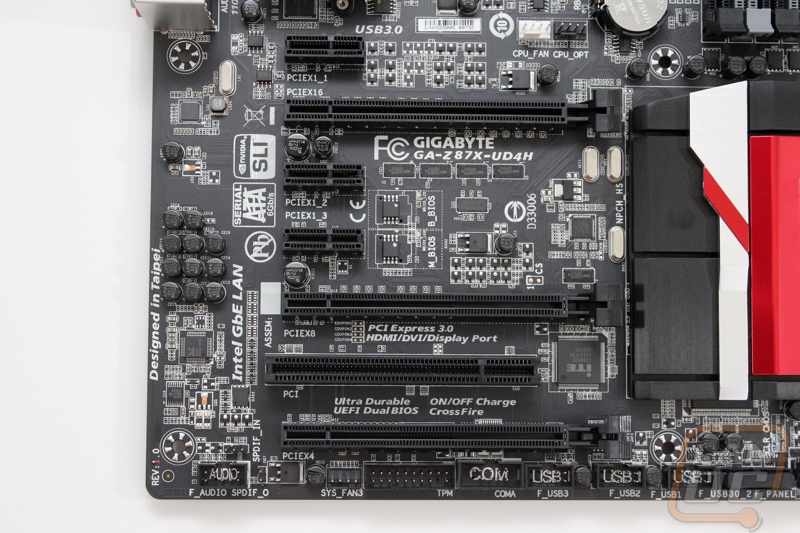 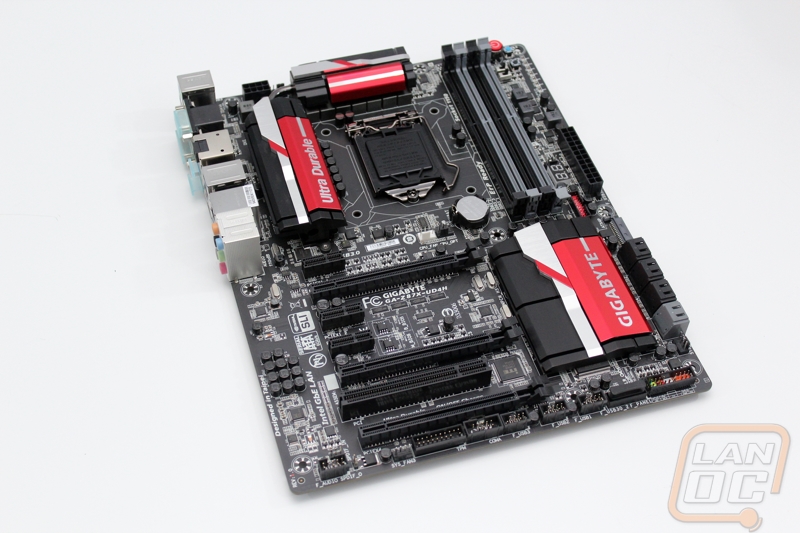 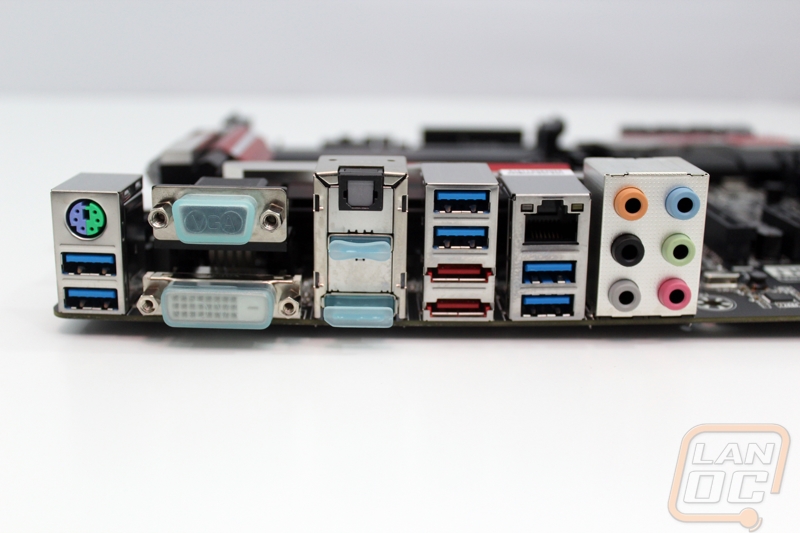 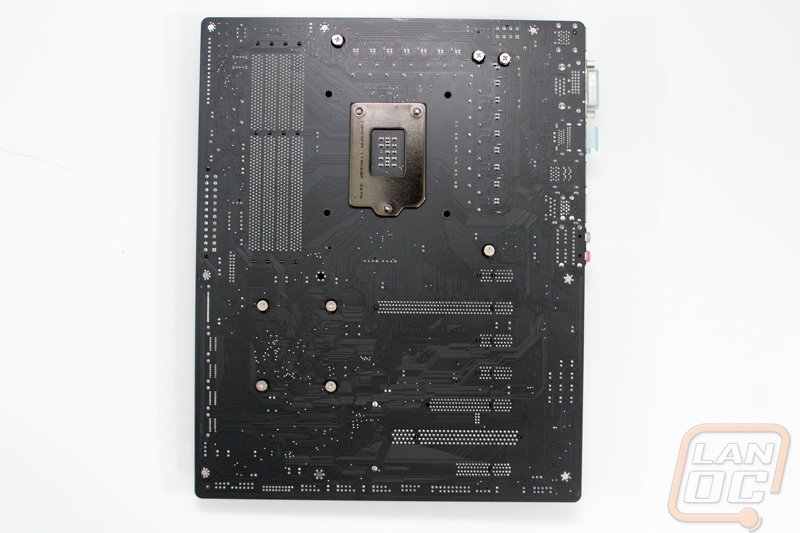 The chipset cooling for all of Gigabyte’s Z87 motherboards changed the design of their heatsinks. The new design is aesthetically much better and they look to be comparable in cooling performance over previous models as well. The power circuitry is cooled by two heatsinks next too and above the CPU socket. They are joined together by a heatpipe that helps spread the heat around for the most effective cooling. Their base color is black but they are trimmed out in red. Gigabyte also trimmed them out in silver by machining off the red in key areas like the Ultra Durable branding. 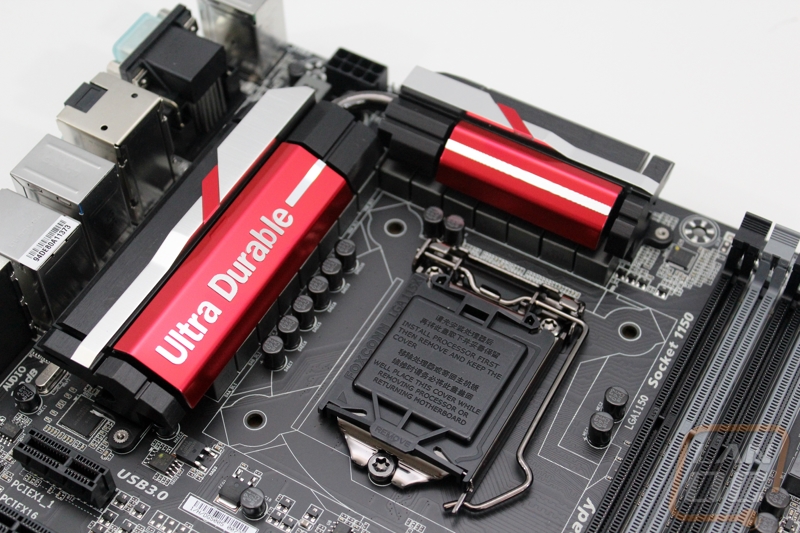 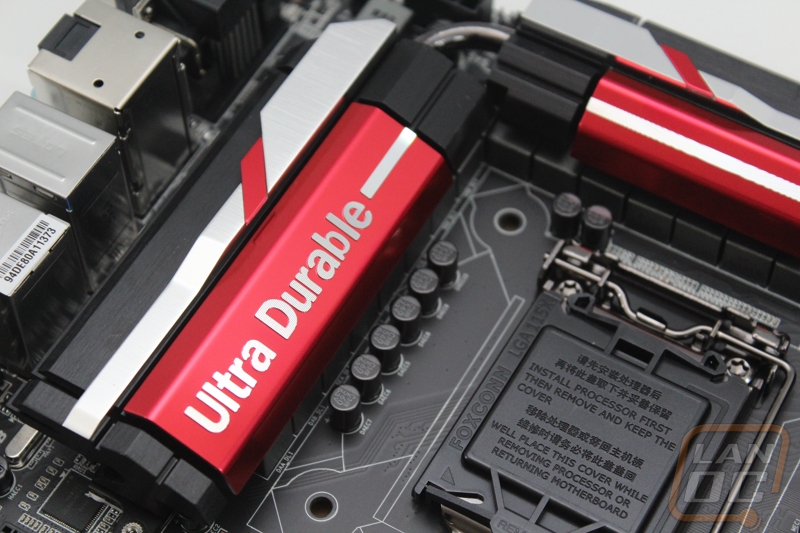 The chipset cooler is low profile to provide clearance for long video cards and it follows the same black, red, and silver color scheme that I saw on the rest of the cooling. Overall I really like the new design, its clean but still eye catching, 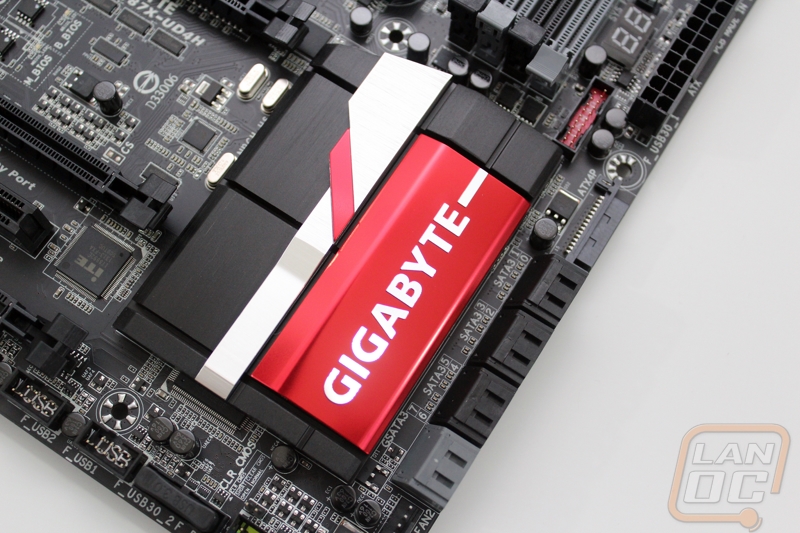 I’ve spoken about it in the past, but it is worth mentioning again here. Performance testing of motherboards isn’t as cut and dry as testing on a video card for example. Generally, considering they all use the same chipset, performance numbers rarely vary by much more than a margin of error. That doesn’t stop me from running the UD4H through our test suite though just to make sure their aren’t any glaring issues. As you can see in the results below, the UD4H performed in line with the other Z87 motherboards we have tested in the past. Keep an eye out on the USB/SATA testing and audio testing as those are more likely to use different controllers and show larger variances.

One aspect of motherboards that a lot of people don’t even consider is their data transfer performance on the SATA and USB interfaces. This can change the way your PC performs day to day in booting, file transfers, and load times of games and programs. To put the UD4H to the test I ran it though a benchmark on CrystalDiscMark. To keep things fair every board is tested using the same 60Gb Corsair SSD both on the USB 3.0 and SATA testing. For USB 3.0 testing I use a Thermaltake BlackX dock to hook the drive up to the PC. As you can see on the SATA testing we had no surprises, the UD4H uses the same Intel SATA controller as the other boards. On the USB 3.0 side the UD4H again uses the Intel controller but it had a hard time competing against the numbers the Asus boards put up due to their USB3 turbo mode. The UD4H still performed up to regular USB 3.0 specifications and that is really all you can expect. Anything beyond that is just a bonus.

For audio testing I run all of the motherboards through Rightmark’s Audio Tester. This benchmark outputs audio out and then right back into the microphone input to test an audio cards overall performance. This is the benchmark that we see the most variance between motherboards because Intel doesn’t include a sound card in their chipset (other than HDMI audio). Generally the more high end a board is the more than can afford to invest into better audio cards as well as focus on isolating the onboard sound card from the rest of the motherboard. In the case of the UD4H I didn’t really have high expectations simply because this is a mid-range to budget board. Even so I was able to compare it to the general market motherboards from Asus. The UD4H performed very well against the other boards in its price range. If you are heavy into audio quality you should plan on adding a sound card later, but I think that most people will be happy with the UD4H otherwise.

After spending time with the Z87X-UD4H I have to say that I came out more impressed than I expected. My last few Gigabyte motherboard experiences have been less refined than I would like. The UD4H has made major improvements in nearly every area. I really like the new cooling design as well as the red, black, and silver design. Gigabyte continues to go overboard with the number of USB and SATA connections including having two USB 3.0 front panel headers available. This is much better than finding out in the future that you don’t have enough room to hook up everything you might need. Really the only downside to the UD4H that I ran across was its audio performance and considering how picky I can sometimes get its impressive that this is the only con I could come up with. The audio performance wasn’t bad, but I wouldn’t call it great as well, although to be fair to Gigabyte they don't advertise this as being an audio focused board. Beyond that I feel that Gigabyte has improved considerably. I do feel the overall refinement and user experience with a few other boards is still better, but if Gigabyte keeps this up they might just pass them up. 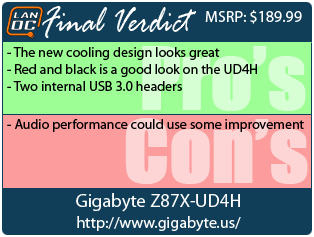 You might call him obsessed or just a hardcore geek. Wes's obsession with gaming hardware and gadgets isn't anything new, he could be found taking things apart even as a child. When not poking around in PC's he can be found playing League of Legends, Awesomenauts, or Civilization 5 or watching a wide variety of TV shows and Movies. A car guy at heart, the same things that draw him into tweaking cars apply when building good looking fast computers. If you are interested in writing for Wes here at LanOC you can reach out to him directly using our contact form.
Discuss this article
Log in to comment
Posts in discussion: Gigabyte Z87X-UD4H

We have 1539 guests and one member online