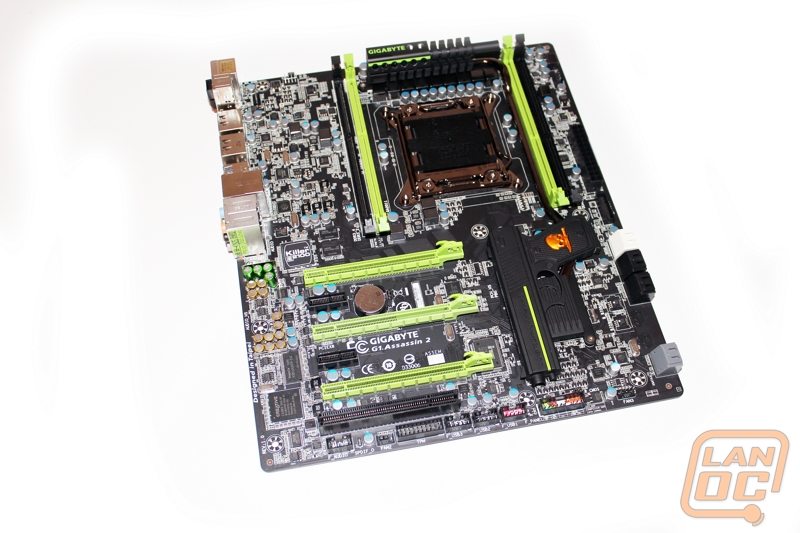 The Assassin 2 at the end of the day is a very interesting board. Gigabyte lowered the price on this board considerably compared to the original without taking away any features. Some might argue that dropping four way SLI support is a con, but after living with the original Assassin and having to find a case that supports XL-ATX I am very happy to see that it’s not a con, more likely a pro.  I love what Gigabyte has done with their board layout especially, in the past we have seen connections and headers placed wherever it’s easiest, now they are located in locations that are easy to reach and areas that help with good wire management.  As always I love how Gigabyte has gone out of the box with the G1 Killer lineup and their unique cooler designs, it may not be the best design for cooling but if nothing else tits a conversation starter.

The best part about the Assassin 2 are what I call its value adders. The built in Creative Audio chipset (when working correctly) is a great addition that adds considerably to both Gigabytes manufacturing costs and the value of the board itself. The built in Killer NIC chipset is also the same, some may argue how much it helps, but having it built right on the board is cutting out nearly $100 for someone who would be looking to buy it apart from the board. Then you have smaller things like the front panel USB 3.0 adapter and even the included wireless/bluetooth card.  It all adds up to make the Assassin a good value for a mid to high end motherboard. Something the original could never say considering its $600 price tag.

It’s not all fun and games though. My experience with the Gigabyte Assassin 2 did have a few ups and downs. My audio issues were very surprising considering the high end audio chipset built into the board. The same goes for the hard drive performance issues that seemed to cause lower performance numbers across the board in any test that touched our two SSD’s.

So when it’s all said and done would I recommend the Gigabyte Assassin 2? Its very dependent on your situation. If you aren’t into the “Killer” style or care about the built in Killer NIC and Creative audio card, no. But if you are a gamer looking for a board that is going to get attention and also help increase your gaming experience then the Assassin 2 is perfect for you. It’s a fairly limited market, but the idea is that Gigabyte makes a board for every type of person. It’s up to you if this is the board for you. 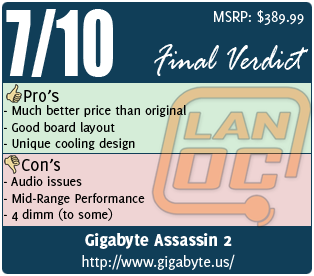 You might call him obsessed or just a hardcore geek. Wes's obsession with gaming hardware and gadgets isn't anything new, he could be found taking things apart even as a child. When not poking around in PC's he can be found playing League of Legends, Awesomenauts, or Civilization 5 or watching a wide variety of TV shows and Movies. A car guy at heart, the same things that draw him into tweaking cars apply when building good looking fast computers. If you are interested in writing for Wes here at LanOC you can reach out to him directly using our contact form.
Discuss this article
Log in to comment
Posts in discussion: Gigabyte Assassin 2

We have 1506 guests and one member online