After spending a lot of time with the Rampage IV, every single time I had a chance to work with it I would find something else that impressed me. Even in this review there is no way I can go into detail with every feature of the board. Asus really hit the ball out of the park with this one. It’s not a cheap board, but you are paying for truly unique features that help with overclocking your new LGA 2011 CPU. Unlike some other boards, it doesn’t feel like they just added a few new features to a standard board and called it premium. With features like the built in thermo sensors and the OC Key I really feel like you are getting your money’s worth on this board. Of course the average enthusiast won’t be able to take advantage of even half of the features included on the board; I know we weren’t able to. But the attention to detail with everything was impressive. My favorite part of the board is something as simple as the design of the CPU hold down. Asus designed the X-Socket to be swappable to allow you to run your 1366 socket cooler right from the beginning. This may not be important in the future, but being a launch board it’s great to have the option to use your 1366 socket water block or LN2 pot to get the best performance possible while waiting for new 2011 socket products to come out.

Of course their attention to detail main it even more frustrating when we did run into issues. I found the VRM cooler's fan to be very loud, but Asus has implemented features in the BIOS to allow you to adjust this down. Even more disappointing was how close one of the heatsinks was to the top PCI slot, once you install the first dual slot wide video card you will need a screwdriver or something skinny to reach down and unlock it when removing. Not allowing room for a finger in this case will mean trouble for a lot of people later on.

All in all the Asus Rampage IV is an amazing product. Paired up with the 3960X and two GTX 580’s it powered through everything we could throw at it. I hope we get a chance to throw a couple more 580’s on there and really push it to its limits! 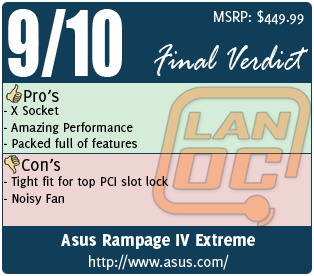 You might call him obsessed or just a hardcore geek. Wes's obsession with gaming hardware and gadgets isn't anything new, he could be found taking things apart even as a child. When not poking around in PC's he can be found playing League of Legends, Awesomenauts, or Civilization 5 or watching a wide variety of TV shows and Movies. A car guy at heart, the same things that draw him into tweaking cars apply when building good looking fast computers. If you are interested in writing for Wes here at LanOC you can reach out to him directly using our contact form.
Discuss this article
Log in to comment
Posts in discussion: Asus Rampage IV Extreme

We have 1595 guests and one member online