You would think because of the size there wouldn’t be much to talk about when it comes to the E350N-USB3’s board layout. But Gigabyte packed a lot into such a small space as you can see! 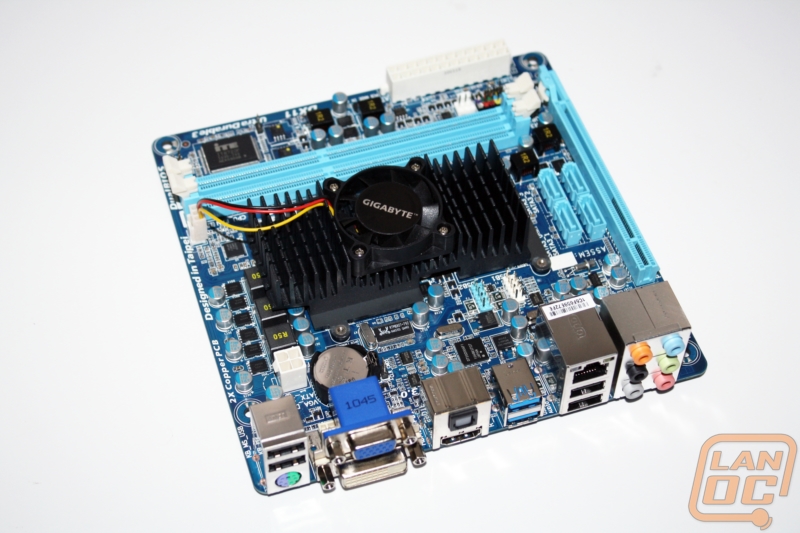 Being an E350 chipset the E350N-USB3 comes with the Fusion APU right from the start. That includes a heatsink that takes up a good portion of the board to keep everything cool. The black heatsink stands out on Gigebyte’s blue PCB. For a little added cooling they did include a small fan on the heatsink incase you end up using the E350N-USB3 in a location with limited airflow. 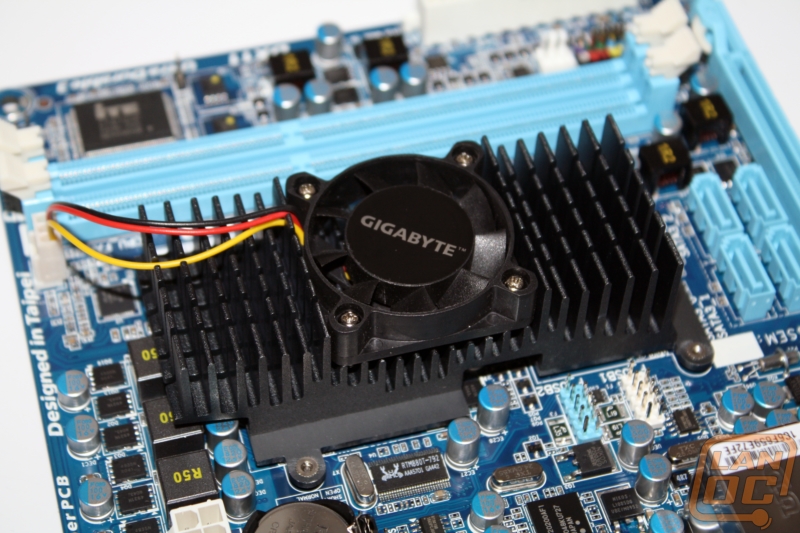 The rear I/O panel takes up the entire side of the board but is filled with more connections than even some full ATX boards. You will find a total of six USB connections, with two of those being USB 3.0 (I think the boards name may have given this away). For audio you have the standard HD audio connection (pink, grey, black, green, blue, orange) and then also a S/PDIF Out. You get one 10/100/1000 Ethernet connection to keep you connected to the world. For those of you using legacy equipment or who are looking for no ghosting you also get one PS/2 connection. Where it gets interesting is the selection of video connections available on the E350N-USB3. You have VGA, DVI, and HDMI. No matter what you are trying to hook this board up to you shouldn’t have any trouble. 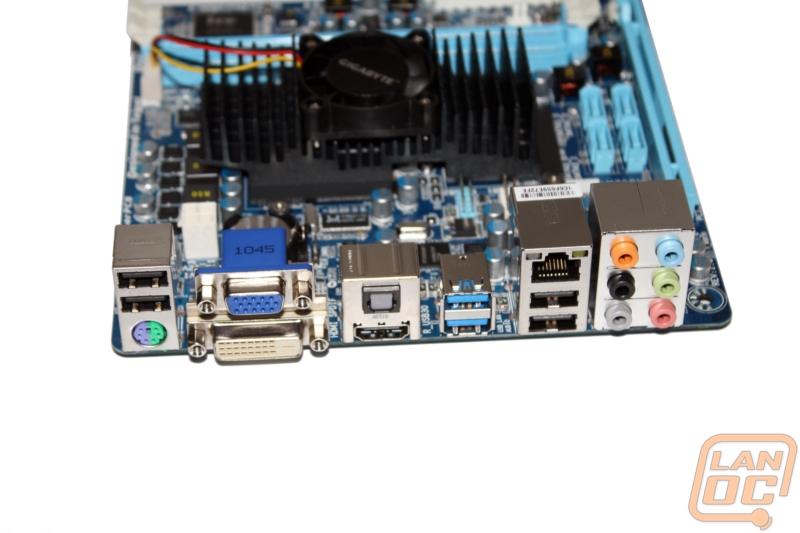 For those of you who are addicted to packing hard drives into your build or if you are considering this board for a NAS box you have a total of four SATA 3 connections available. For most people this should be more than enough, unless you are trying to go crazy with onboard storage for an HTPC. It’s also nice to see all of the SATA connections be full SATA 3, no point in having a mix of old and new connections. 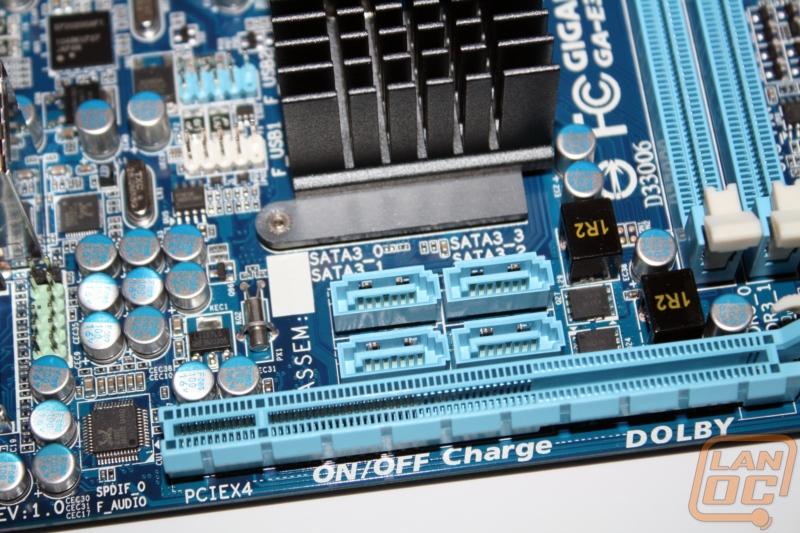 Because of the boards size you are limited to just one PCI Express x4 slot. Perfect if you are looking to add a RAID card in the future. I can’t imagine you could need much of anything else. In this picture you can also see the front panel audio connection on the left just behind the rear I/O panel.. 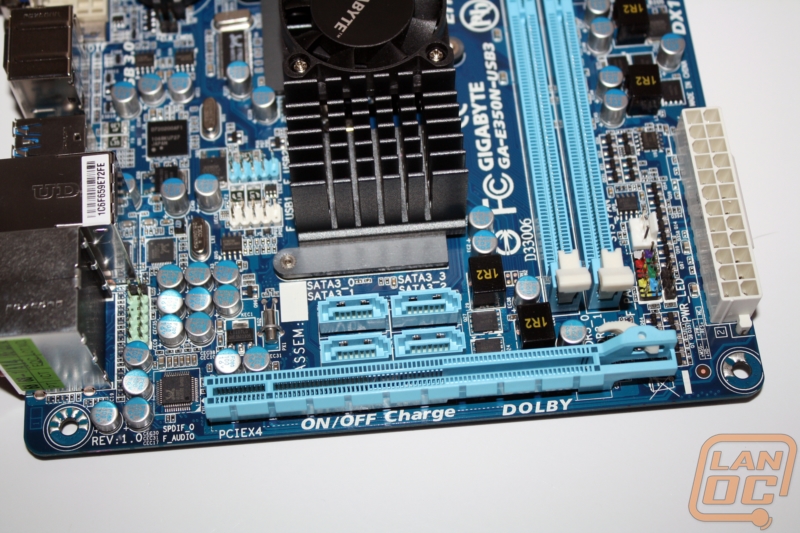 On the bottom right corner of the board you have both the 24 pin power connection and the front panel header together. Along with them both you also have a three pin fan header. I really dig that the front i/o header is color coded clearly enough that everyone should be able to get everything hooked up without problems. 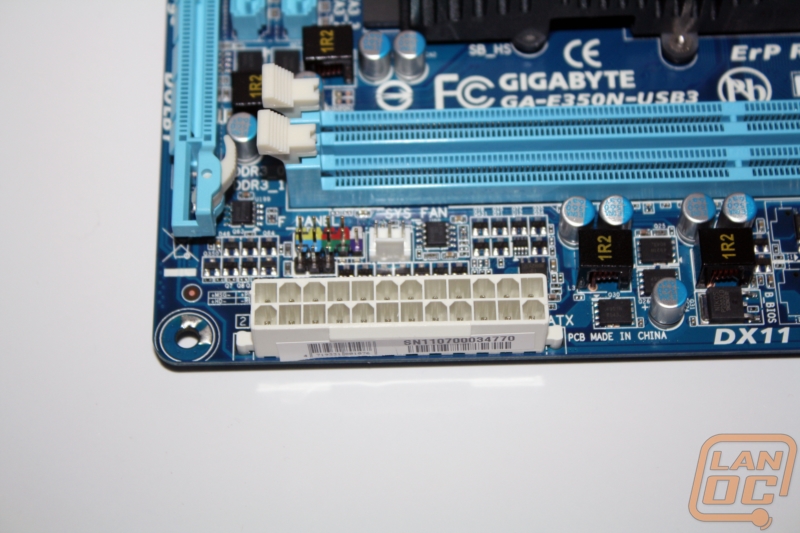 In the following image you can see the ITE IT8720F controller chip that helps control the fan speed on the E350N-USB3. This is also a good view of the two DDR3 ram slots. They are both light blue in color and because it is just the two slots you don’t have to worry about putting your Ram in the wrong channel; win! 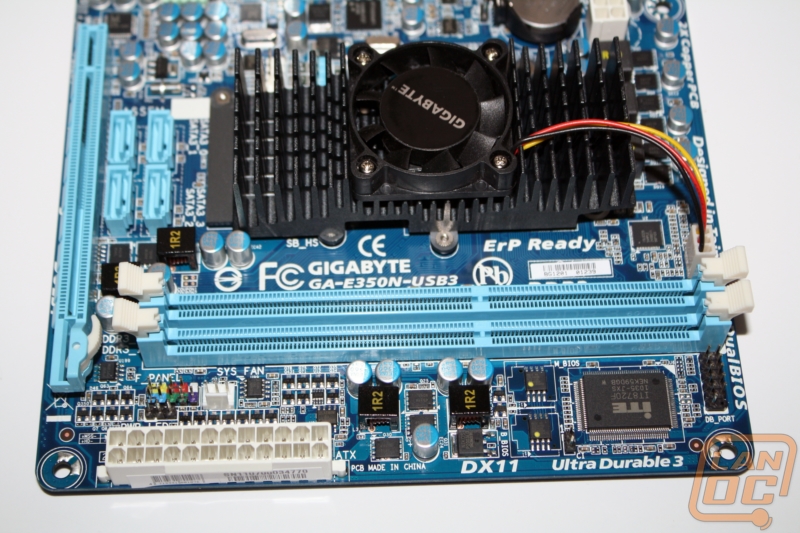 Gigabyte went with the full blue PCB on the E350N-USB3 as you can see in this photo. The four mounts for the heatsink are also visible. If you were wondering if you could change the included heatsink this should answer your question. Even though it is removable, I doubt you ill find a heatsink to match up. 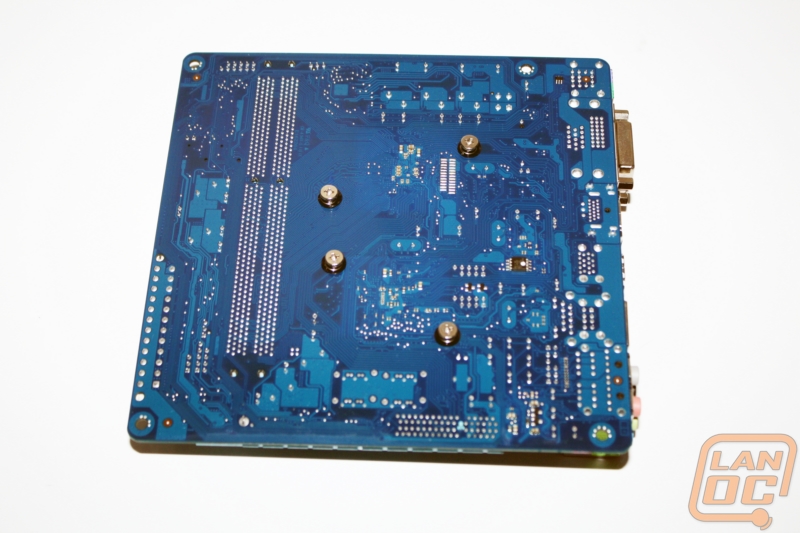