The Z568X-UD3H-B3 is a full ATX motherboard with a standard configuration. Gigabyte went with a black PCB on this and most of their other enthusiast boards starting at the beginning of this year with the launch of Sandy Bridge. Let’s take a closer look at a few of the boards components. 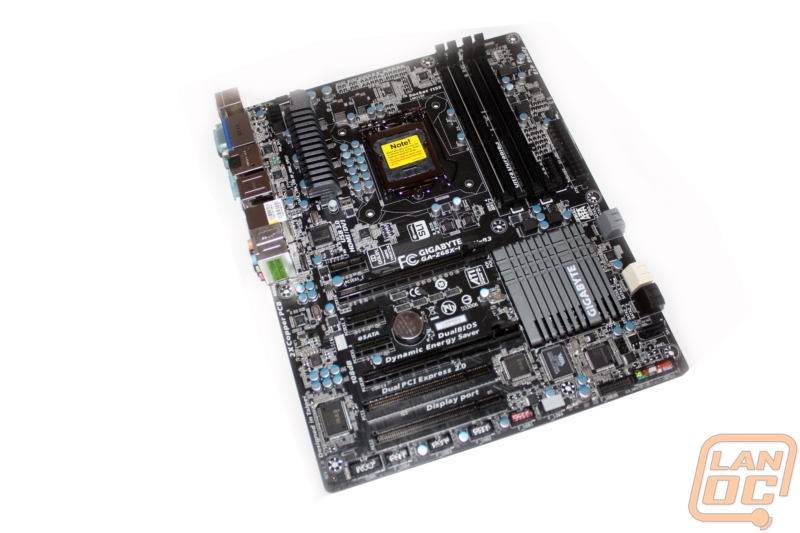 In the top right next to the CPU socket you have four black DIMM slots for DDR3 dual channel memory. Unlike their past boards you don’t have two colors used on the DIMMs, so you have to be careful to put the RAM in the correct slots if you are going with a standard dual channel setup. Next to the DIMM slots you have the standard 24 pin power connection, also in black. Tucked in there is also a TPM header (Trusted Platform Module) in case you have the need for it. 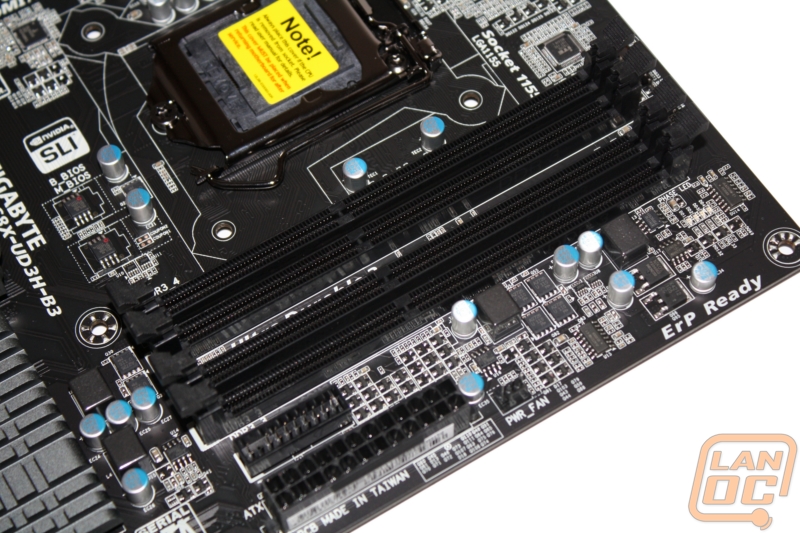 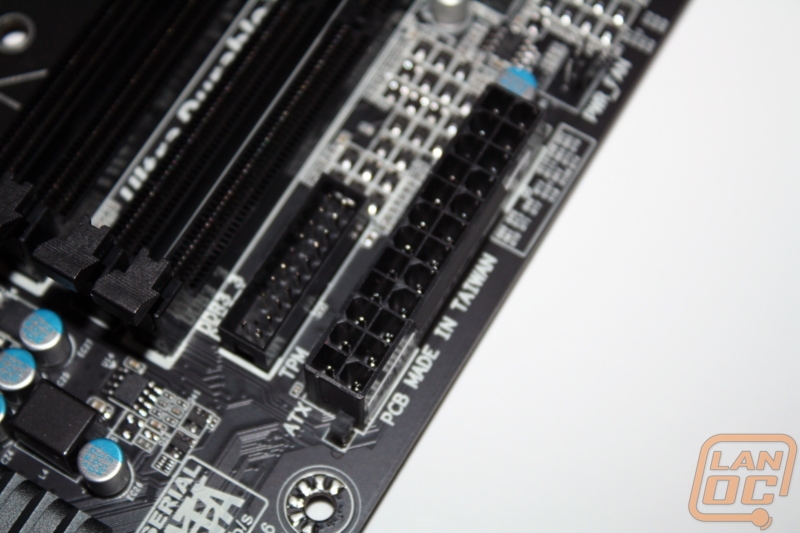 In the middle of the board you have the model number in a fairly easy to read location, although when you have a heatsink and video card in there it will be tight. You can also see in this photo both of the dual BIOS’s. 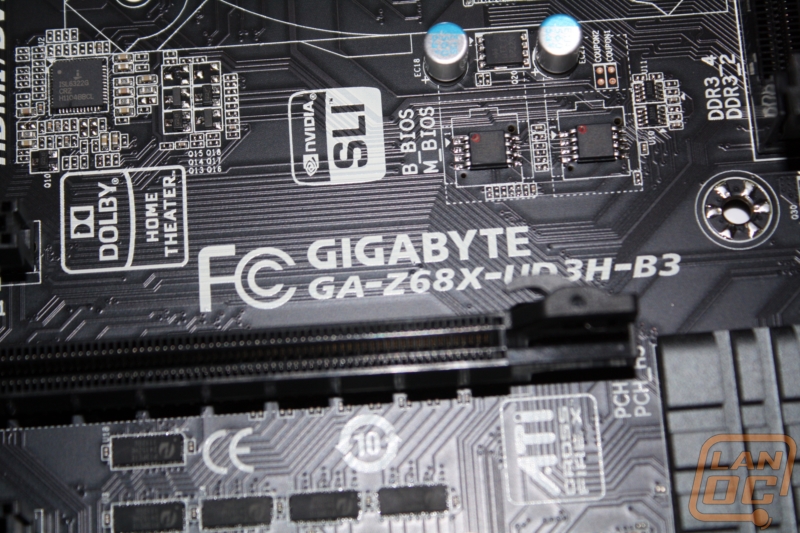 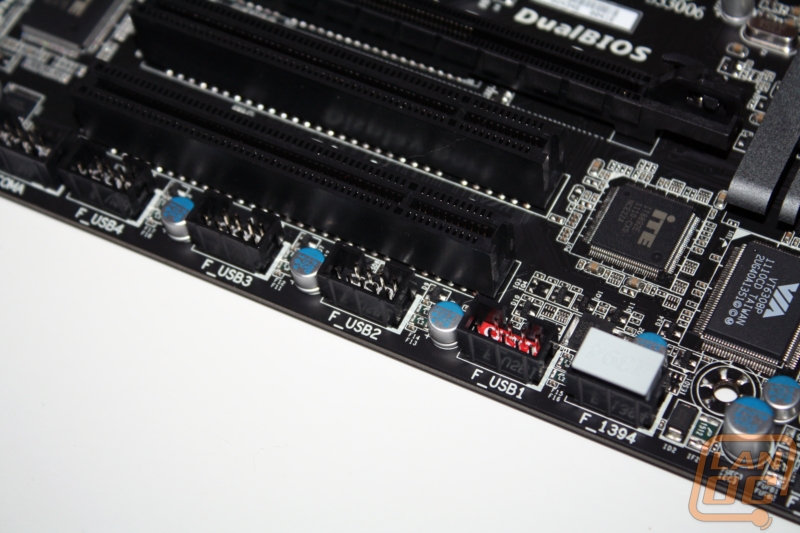 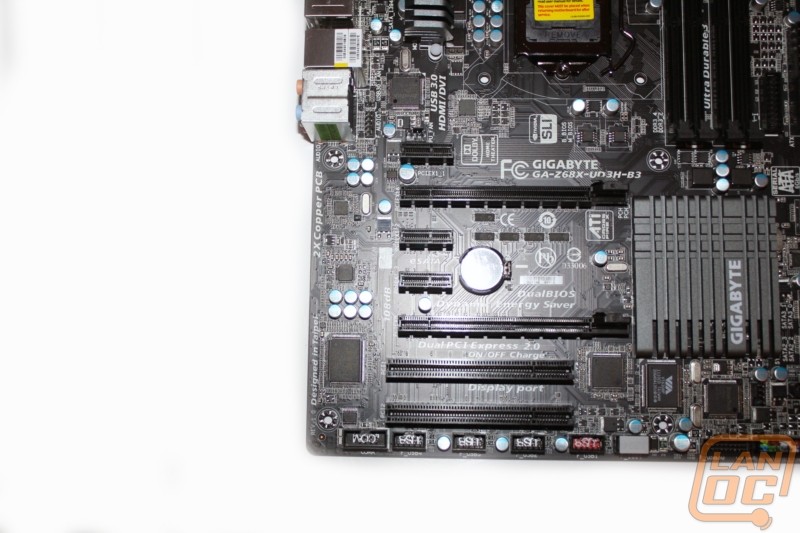 Here is our breakdown of the PCI slots. You can see that you get two PCI Express 16/8 slots. The top slot will run in x16 mode as long as the second slot is unused. When running a Crossfire or SLI configuration both slots will run at x8. On top of that you have three different PCI Express x1 slots. All three may not be useful but this does give you a few configuration options when running other cards in the x16 slot. Then you also get two legacy PCI slots down at the bottom. We don’t see the legacy slots on every board, but if you are still hanging on to an old sound card or something similar these slots may be a godsend. 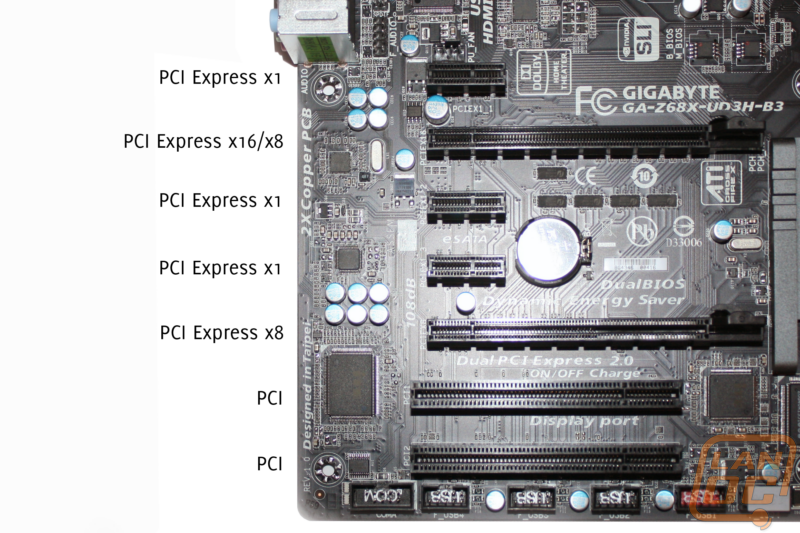 Down below the DIMM slots you have the SATA ports along the edge. The seven slots are split up between three different colors. The three black ports are SATA 2 and the white and grey parts are SATA 3 or SATA 6. The reason for the two colors on the SATA 3 ports are because the white ports are running off of the chipset (like the black ports also) and the grey ports are running on the built in Marvel 88SE9172 chip. The chipset controlled ports support RAID 0, 1, 5, and 10. The Marvel ports support RAID 0 and 1 due to the limited amount of ports. You can’t run a hardware RAID across the two platforms, so if you need a hardware raid be sure to plan accordingly when building. 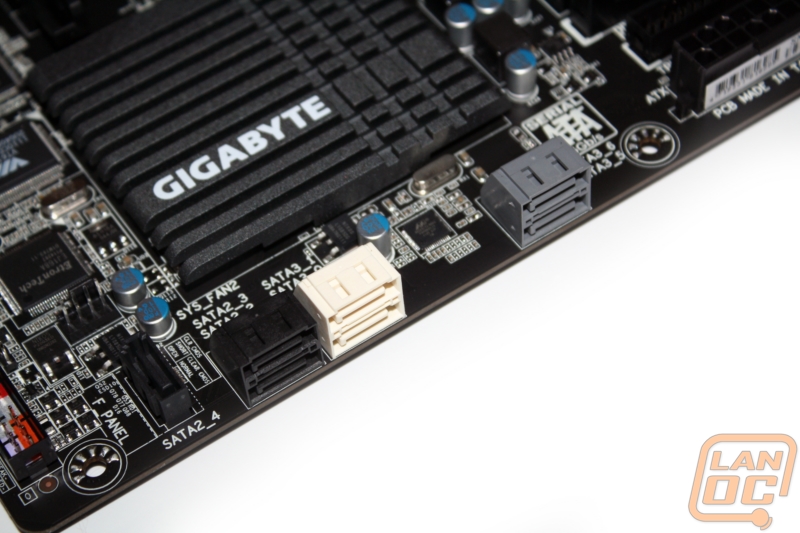 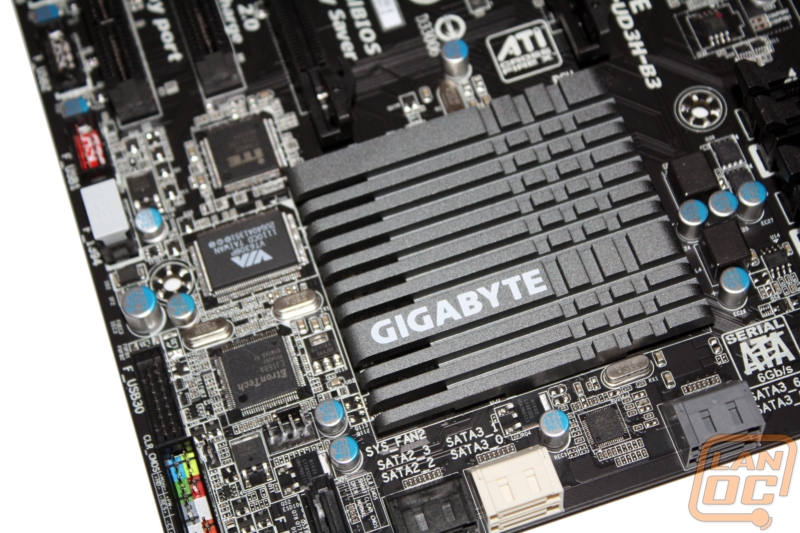 In the far bottom right corner you have four very important headers. First you have a four pin PWM fan connection for a case or system fan. It’s nice to see PWM being used on more than just CPU fan headers; this will help keep your case quiet when max cooling isn’t needed. At least for those of you who are running PWM fans. You can also see one internal USB 3.0 header, something that is slowly becoming standard on all new cases.

The front panel connections are easy to spot with its color coded layout. If you don’t know what the colors stand for you also have a diagram just under it printed on the PCB. Last but not least they also tucked the clear CMOS header just above the front panel header. This is a great location for this because it shouldn’t be too covered even with multiple video cards in your case. Typically we see this located in a difficult to reach spot, kudos to Gigabyte for considering this when putting together the Z68Z-UD3H-B3. 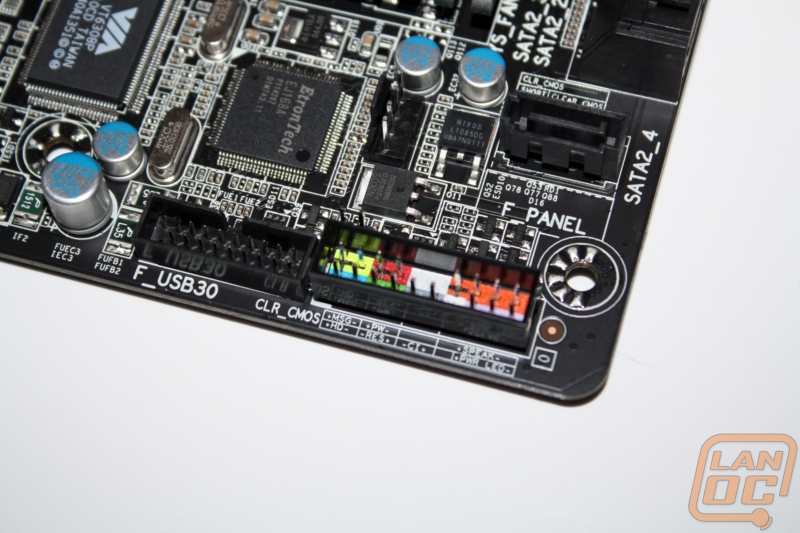 The rear I/O panel for the Z68Z-UD3H-B3 is just PACKED full of connections. Let’s start with audio: you have the standard six port panel along with an optical connection for those looking to hook this up directly to your home stereo. Even with the massive amount of connections Gigabyte still slipped in one PS/2 connection for running your keyboard or mouse. This is important to gamers who are looking to avoid ghosting issues that USB can cause. Speaking of USB, you have a total of seven connections to pick from. Two of those connections are USB 3.0 ports and are colored blue to make them easy to spot. The other five are red in color because they support Gigabytes 3x power. One of those ports also doubles as a powered eSATA connection. Just like inside they also provide one Firewire connection for those of you looking to use it.

What sets the Z69 chipset apart from the P67 is its inclusion of onboard video. Because of that they were careful to make sure every type of connection possible was packed onto the Z68Z-UD3H-B3. You have a legacy VGA port, Dual Link DVI, Display Port, and HDMI with audio. 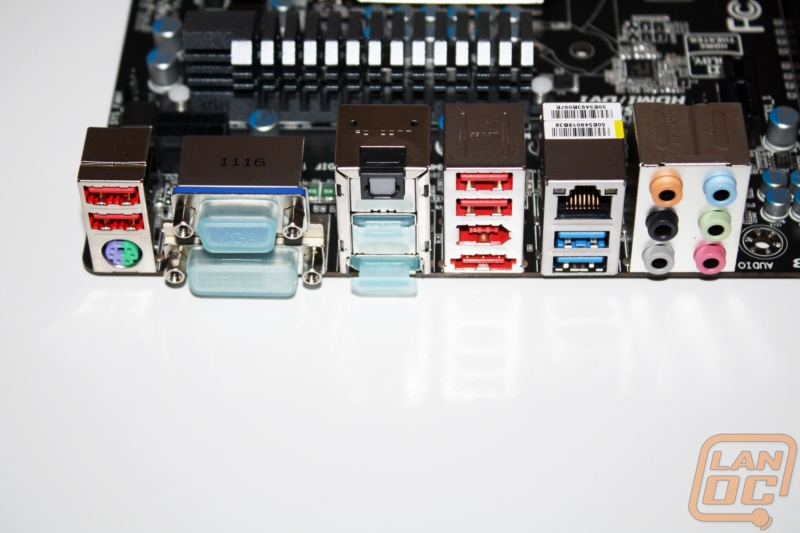