Standing back and admiring the Pure Platinum A75 you can see a lot of similarities from Sapphires other Pure boards. The black PCB with black and blue trim will look good in just about every build, or at least that is what Sapphire is hoping for. 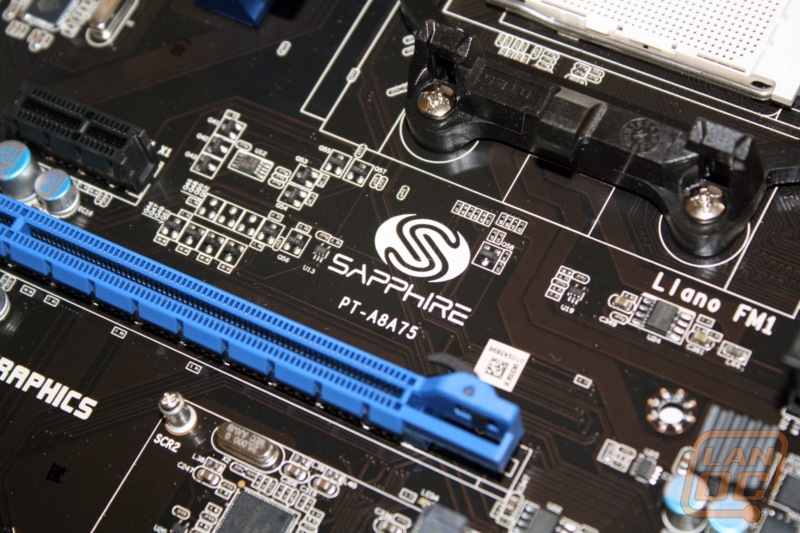 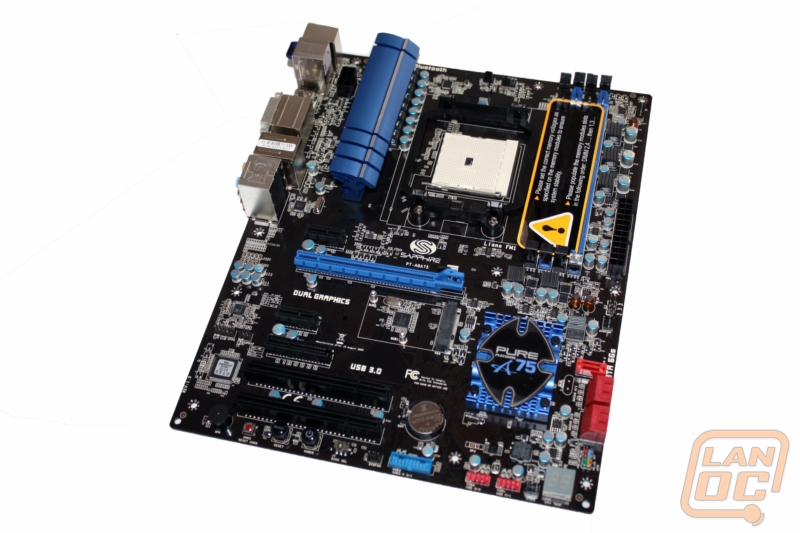 Down in the bottom right corner you have the diagnostic LED that also doubles as showing the current CPU (excuse me, APU) temperature. It is interesting that Sapphire has it labeled as the 'CPU' temperature, I’m sure someone at AMD will be unhappy with that one considering the push to make sure the Fusion line is described as an 'APU'. Also in that corner you have a three pin fan connection, two USB 2.0 headers, and a nicely labeled and color-coded front panel header. 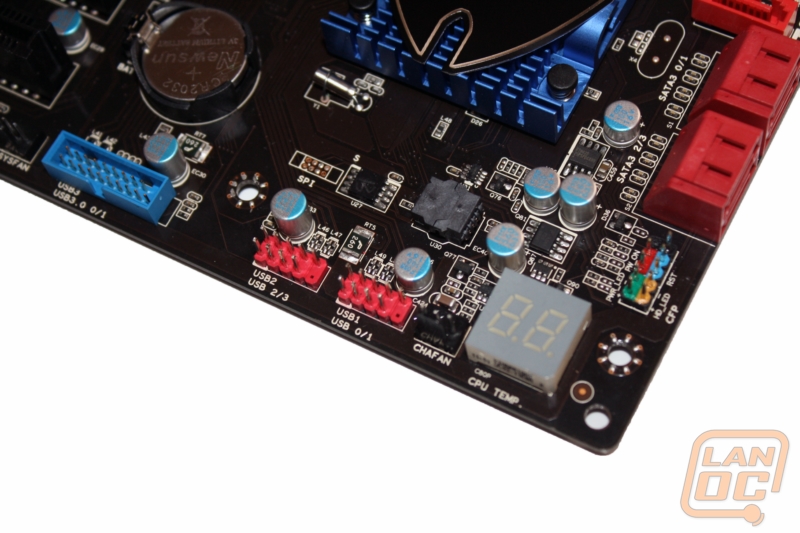 Moving up the board slightly you have the board's SATA connections. With the A75 chipset being AMD’s flagship A-Series board they made sure that it supports SATA 6 natively. That means that all of the Sapphire Pure A75’s six SATA connections are all SATA 6. Of course there are only five pictured, the last port is on the rear I/O panel. 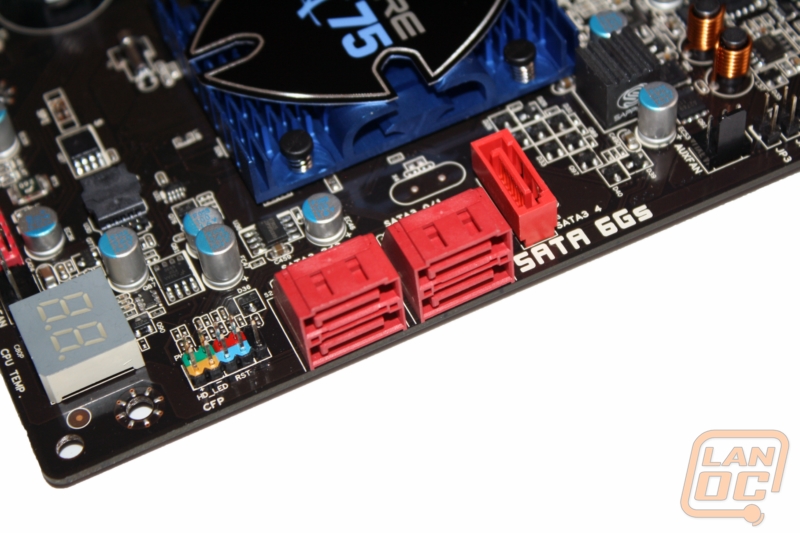 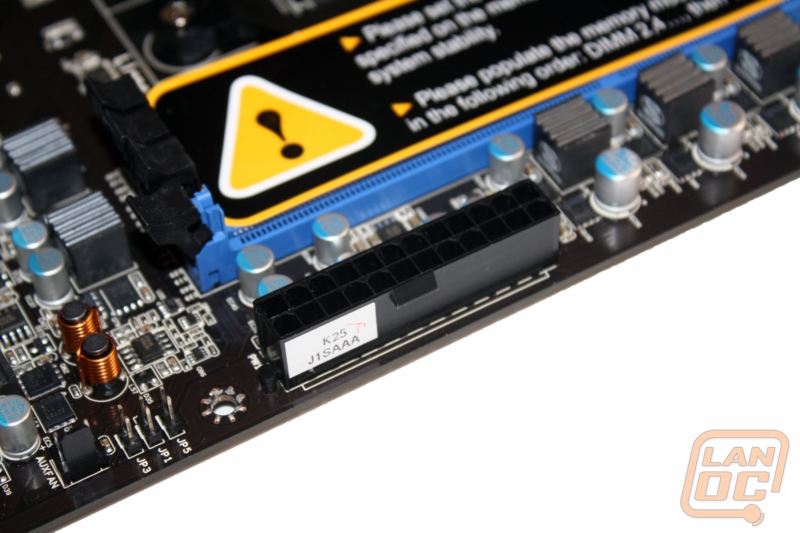 Speaking of RAM slots, you have four slots supporting dual channel DDR3 up to 1866 Mhz. Of course they stick with the black and blue theme. If you are only running two sticks you will be using the black slots leaving the blue to be seen. 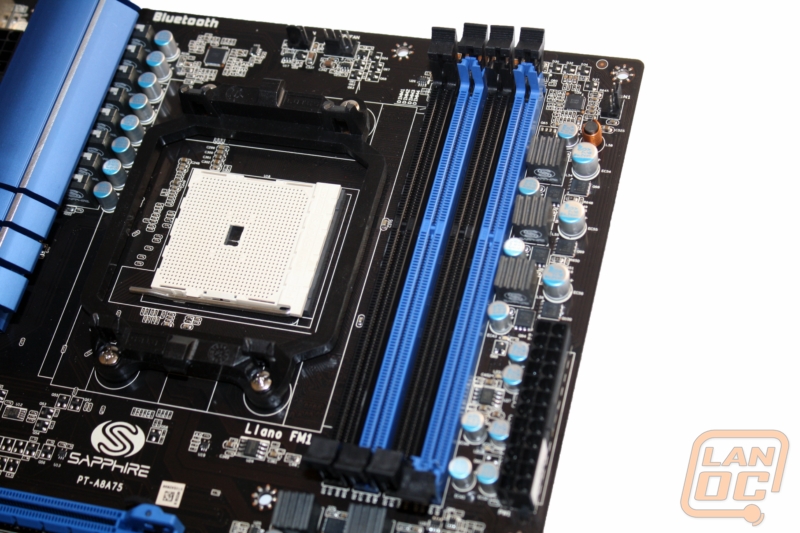 Here is the heart of the beast, the “APU Socket”. If you were to look really close you would see a total of 905 pin connections. And yes I did say PIN connections, for those of you who are used to Intel CPU’s AMD still uses the good old fashion pin setup. You always have to be extra careful not to bend any pins, we actually had three bent pins with ours when we received it. Nothing an extra gentle touch can’t fix, but it’s not for the timid. 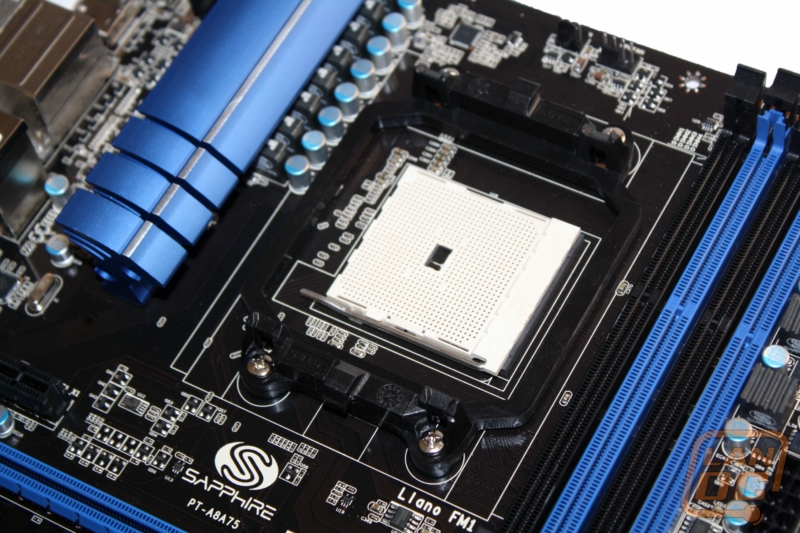 Back down at the bottom to the left of the USB 2.0 ports you have one internal USB 3.0 header, the BIOS battery, and another 3 pin fan header. 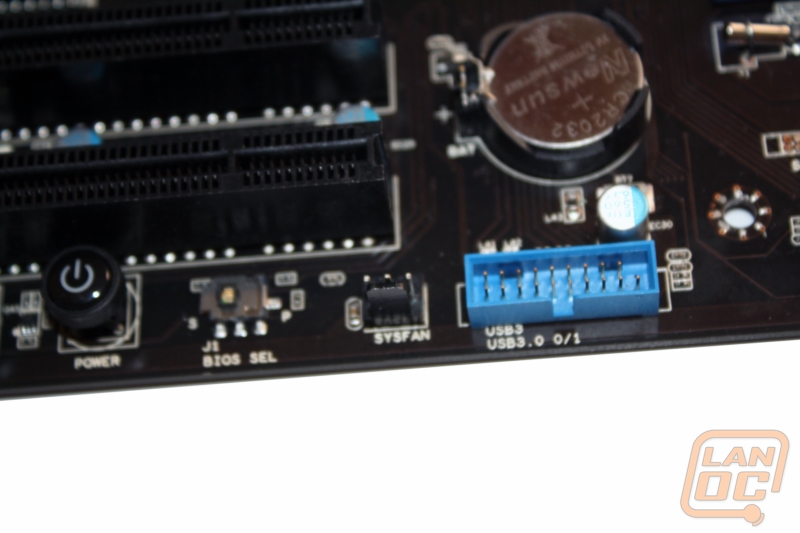 Going further to the left you have a collection of buttons and a switch. The switch allows you to swap to a backup BIOS on the off chance that you have problems. It’s a small switch and it wouldn’t be easy to reach in a case, but it’s nice to know that it’s there if you need it. You also have a small red button to reset the CMOS in case your overclocking gets a little out of hand. The power and reset buttons are much larger and when the motherboard is receiving power they also glow a nice eye catching red. I don’t think that these buttons come in handy for a lot of users but for someone using a test bench they are a godsend. 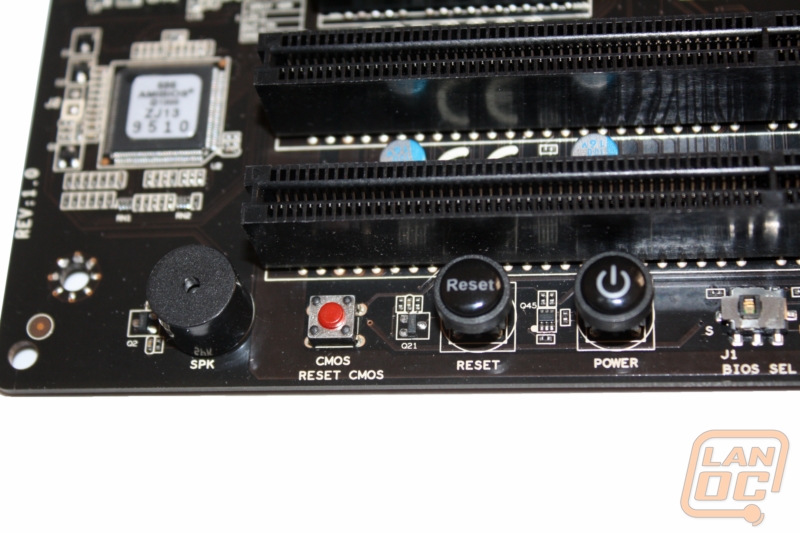 The front panel audio connection is tucked away against the PCI slots and to the left of the x4 PCI express slot. That may make running a front panel connection a little difficult if you need to use that slot. 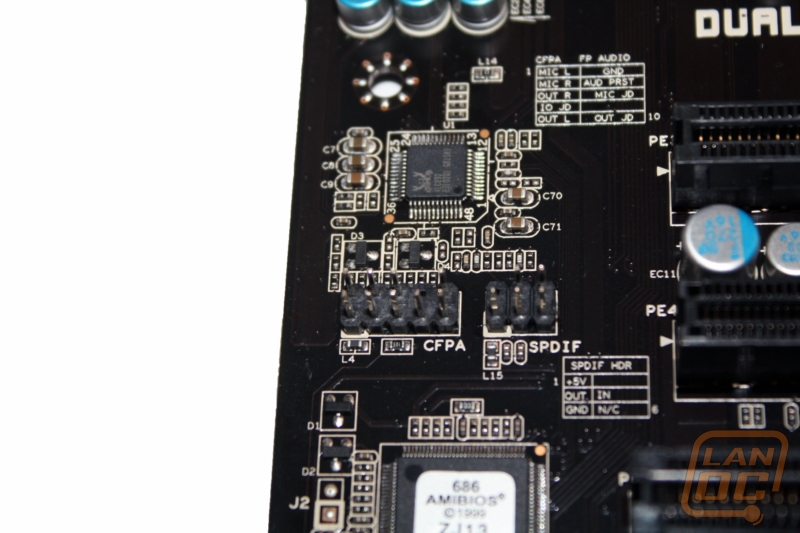 If you haven’t already noticed, the Pure Platinum A75 has more than just a few fan connections. You can find two more up above the APU socket. One is a four pin PWM header for your CPU fan and the second is a 3 pin for your power supply fan if it requires one. In all this board has 5 fan headers, you should have no problem keeping it cool! 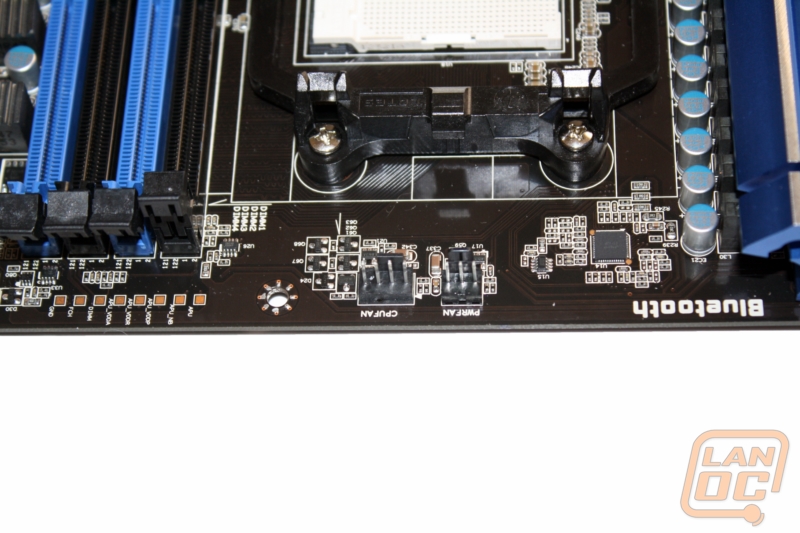 There is nothing special about the 8 pin CPU power connection. It is tucked in behind the I/O panel and is a little hard to get to with the heatsink next to it. 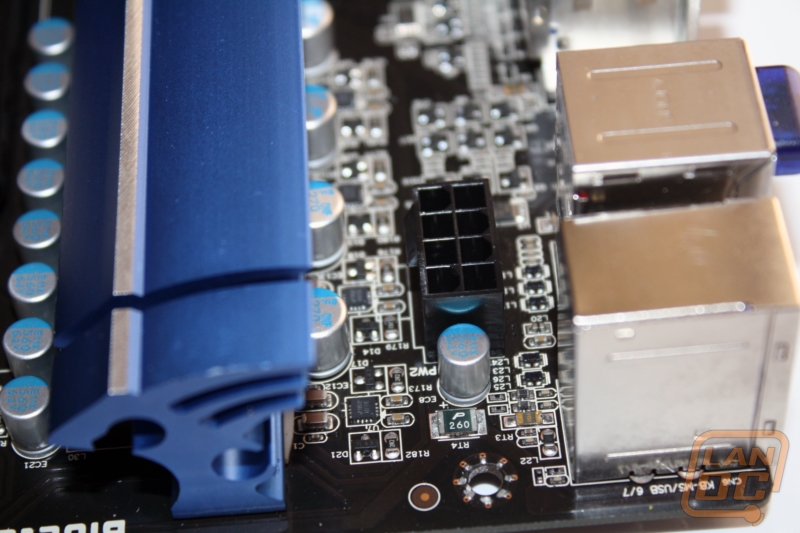 A strange but welcome sight on a full sized motherboard is the mini-PCI Express slot slipped in just under the PCIe x16 slot. 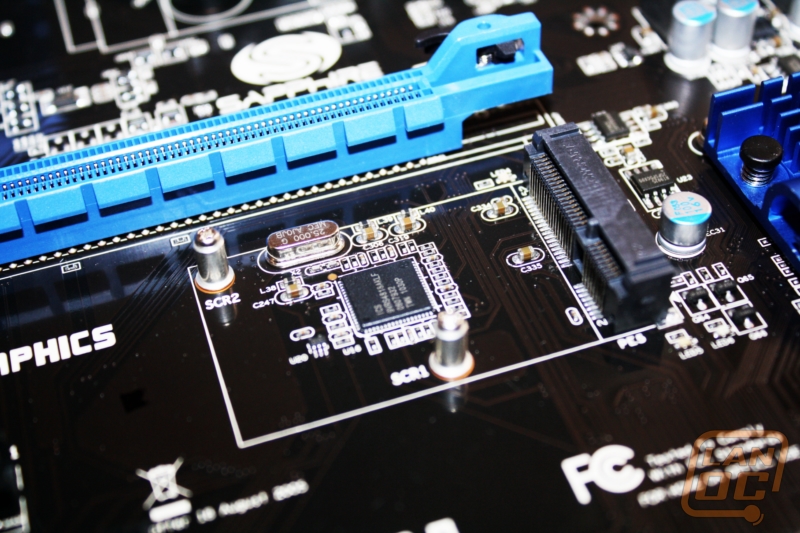 A full breakdown of the Pure Platinum A75’s slots. 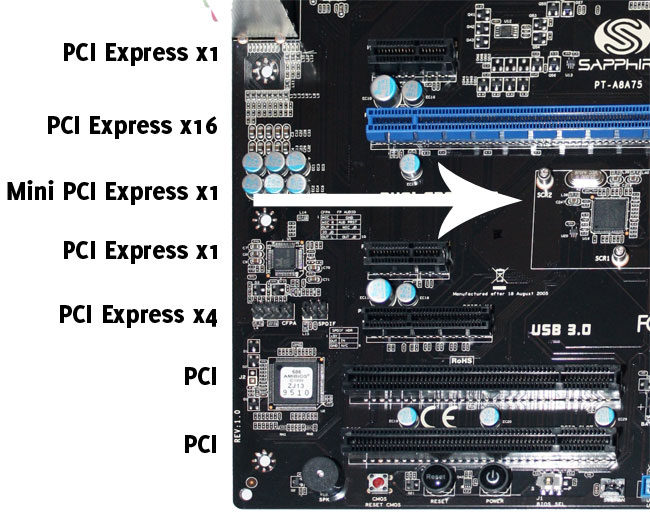 With the integrated graphics card in the APU it’s no surprise to see a selection of video connections on the rear I/O panel of the A75. For video alone you have Dual link DVI, display port, and HDMI. For audio you have a standard 6 port cluster. You have four USB 2.0 connections and two USB 3.0 connections to hook all of your devices up too. Speaking of USB, the power eSATA port also doubles as a USB 2.0 port if you just have to have one more. There is a legacy PS2 connection along with a Bluetooth receiver to cover all of your mouse/keyboard connection options. Last but not least you also have one 10/100/1000 Ethernet port above the USB 3.0 ports. 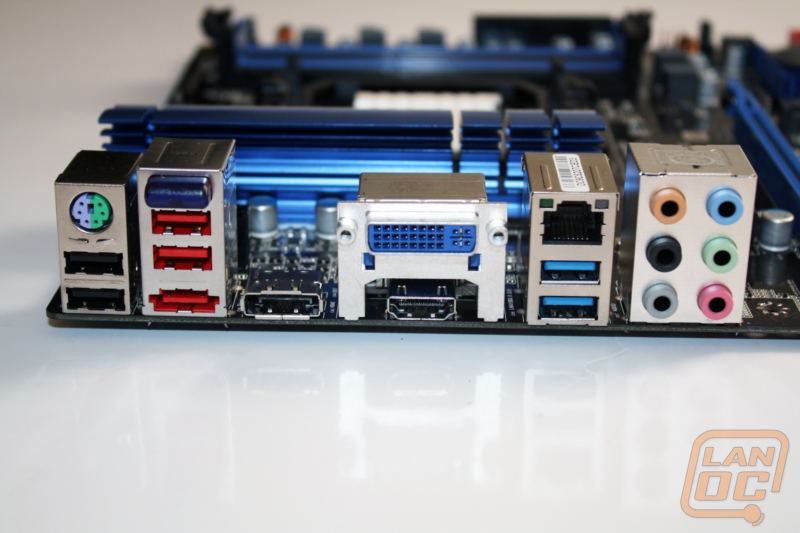 We have 1418 guests and one member online