To start my overclocking testing I jumped into Asus’s Al Suite II, my experience with it during our software testing was great. Jumping to TurboV EVO and the auto tuning tab I was greeted with two options, Fast and Extreme. To start things off I went with Fast, keep in mind at this time I was still running Intel’s stock Sandy Bridge heatsink. The software runs through an internal benchmark and then steps up to the next multiplier until it fails the test or the PC reboots. At that time it will take it down a notch, retest, and if it passes, move on to the BCLK. In this case it capped out at a multiplier or 42. BCLK testing is the same with the small step ups and retesting. The software edged out a BCLK of 103, giving us a 4326MHz. The test was painless and a little exciting to watch. I also like how they show you a percentage of increase along with the other numbers. 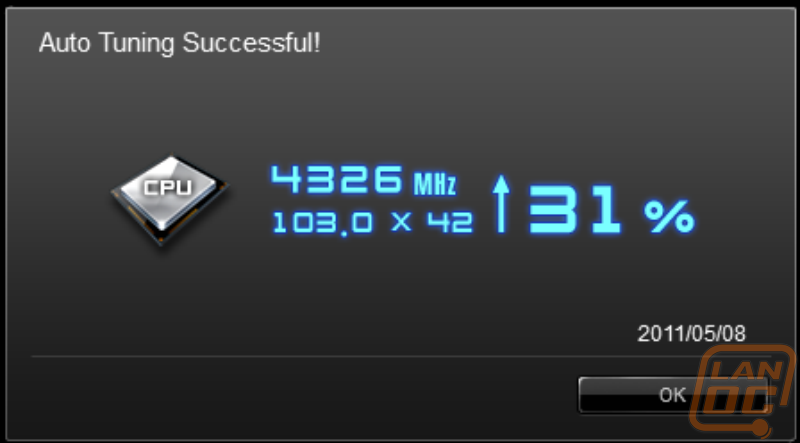 Fast is never fast enough so we moved on to the “Extreme” setting. Running through the same procedure as before we ended up with a 4635MHz same 103 BCLK but with a multiplier of 45 this time, giving us an increase of 40%. 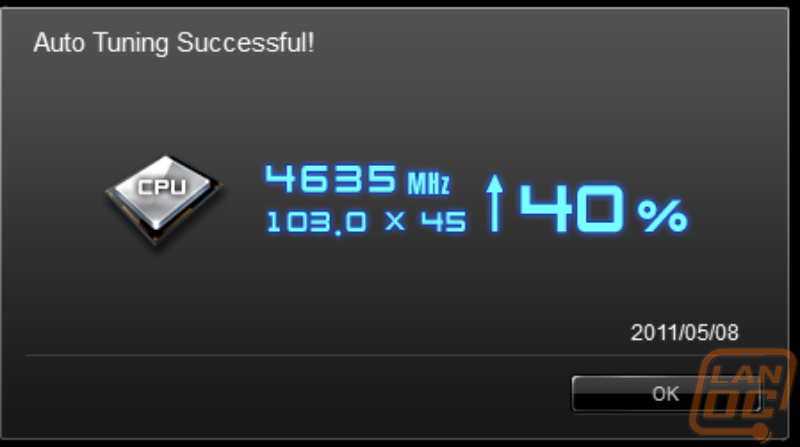 This is about the time that I realized that I was doing all of this with the stock heatsink. Swapping it out with a Noctua heatsink was quick and painless and should prevent heat from being an issue. Running Extreme a second time, but with adequate cooling I was shocked as it jumped past the multiplier of 45 from before and went all the way to 49. Our BCLK was again 103, giving us a whopping 5047Mhz overclock! I have hit similar numbers using the BIOS on other boards but I have never seen a software come anywhere near this type of overclock. 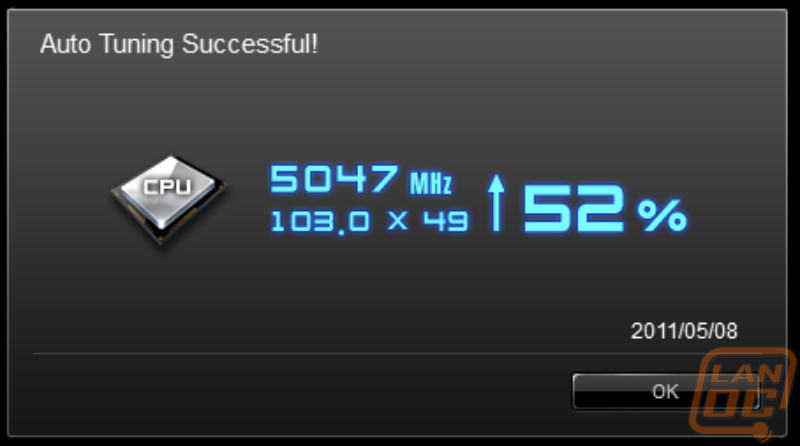 After doing my testing in windows my BIOS overclocking was a lot less exciting. Using our results as a base I wasn’t able to edge anything else out of the CPU other than more heat with increased voltages. Asus clearly did a great job with their TurboV EVO, to the point where I really didn’t need to spend any more time in the BIOS. 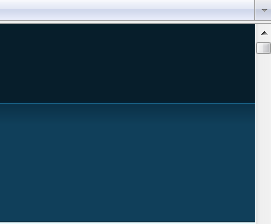 That's all pages, wow. Great coverage man, this is impressive.

Nacelle replied the topic: #16076 07 Jun 2011 15:07
That's the one bad thing about Sandybridge, the shortage of PCI-e. Anyone wanting to use a Revo Drive had better be prepared to sacrifice a bunch of stuff to get it to work. Hopfully someone will make a board with a NF200 chip on it, adding more lanes.

Nacelle wrote: That's the one bad thing about Sandybridge, the shortage of PCI-e. Anyone wanting to use a Revo Drive had better be prepared to sacrifice a bunch of stuff to get it to work. Hopfully someone will make a board with a NF200 chip on it, adding more lanes.

I agree Chris but those Revo Drives are not cheap. I am fine with my ol' Intel SSD.

Nacelle replied the topic: #17009 26 Jul 2011 02:05
The new Revo drives average 1330mb/sec transfere. If I didn't have this motherboard and had the money for one of the smaller ones, I'd get it. Maybe with the Christmas bonus, unless there's new GPUs out that need buying.