In a market where almost every X58 motherboard is the same Gigabyte was able to make the G1 Assassin stand out in a crowd. Their attention to detail with the cooling system puts the entire G1 Killer series of motherboards into a class of their own. With a list price of over $500 it is a hard sell on a platform that is over ¾ through its life cycle, but the Creative audio and Killer NIC integration really do give you more value. A lot of people will question why Gigabyte decided to launch this on the X58 platform over the never Sandy Bridge, Gigabyte explained to us that they felt the gamers would need the extra bandwidth on the PCI Express slots that X58 can afford, for more video cards. While that may be true, it’s still going to be a hard sell for a lot of people to go with an LGA1366 CPU over a cheaper and sometimes faster LGA 1155. Because of that, I hope we see AMD and Sandy Bridge variations of the G1 Killer lineup soon. Gigabytes first attempt at a full gaming focused board hits the nail on the head in almost every way, I can’t wait to see what they do next. 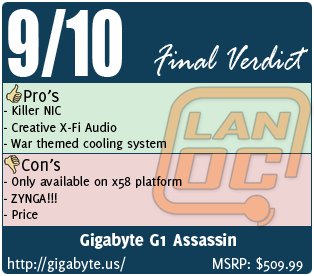 We have 1372 guests and one member online