There are a few perks to my job and one of them is getting to benchmark and test a gaming motherboard in game while still getting to tell myself that I am being productive. I started my testing on the Gigabyte Assassin with all of the synthetic benchmarks knowing that if I did the in game testing first I may never finish. I tested using the procedures listed above, you are welcome to double check my “work”, lol. 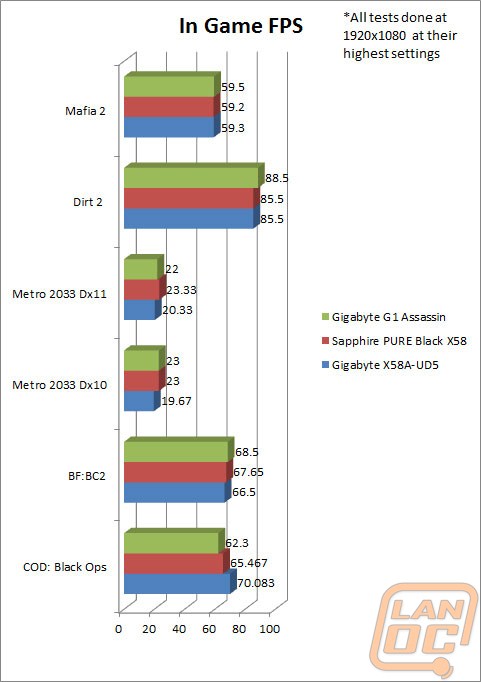 Our standard set of in game benchmark’s showed performance very close to other X58 boards. The same could be said for PCMark’s tests with one exception, gaming. The standard 3DMark Vantage results using the performance setting showed a similar jump but other tests showed the opposite. That just goes to show you what we have said before in the past that you really won’t see a jump in performance when switching motherboards. It’s all about the boards features and layout. We do still do all of our testing just to make sure there isn’t a glaring issue, and as you can see the G1 Assassin had none. 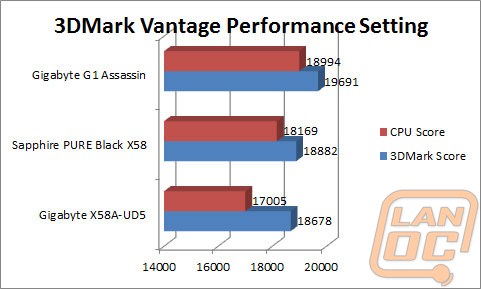 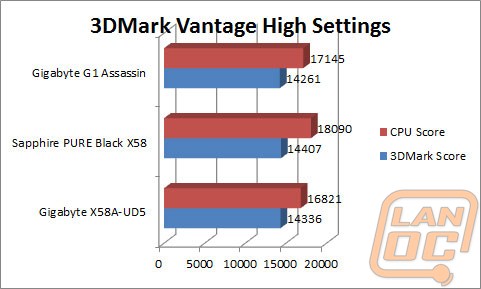 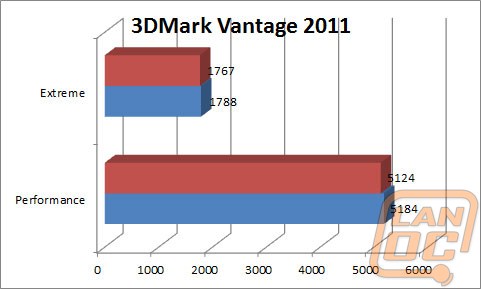 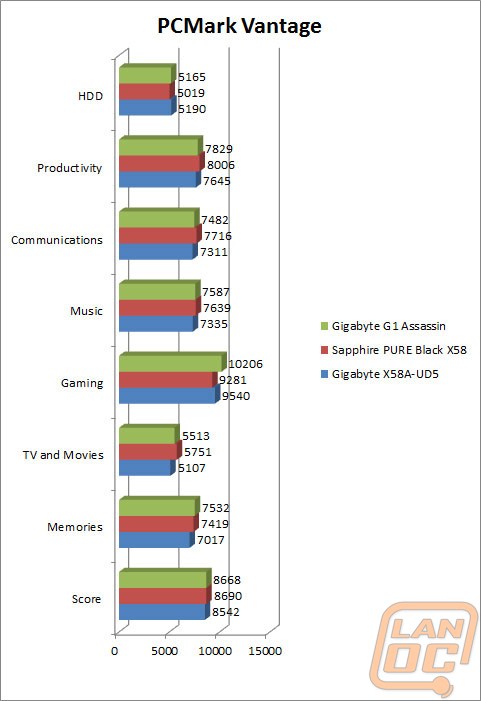 Where Gigabyte made the G1 Assassin shine was with the built in Killer NIC and Creative sound card. Our testing of the Killer NIC showed similar results to what we have seen before. You will see a small drop in pings but it’s nothing that will affect the average user. That six ping drop could be the difference between getting the kill or getting killed in a competitive match though. More importantly I was able to take advantage of the Killer NIC’s software and give my games priority over other internet traffic like torrents and game downloads. This was very obvious when I was able to download a large file and still enjoy a nice game of Black Ops without any issues with lag. THIS is where the Killer NIC earns its price; something that I don’t think is pointed out enough when people are quick to put it down. When I did offline testing I saw a more noticeable difference between the bigfoot NIC and a standard NIC. Although my Ping improvement was similar to what I saw online, this time it was clear that the Killer NIC’s ping was more stable. I’m sure this is a testament to the network processing being offloaded off of the CPU. 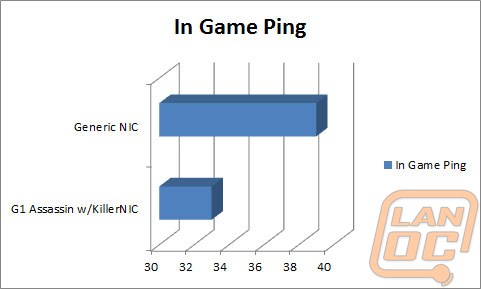 My testing of the Creative Soundblaster X-Fi Digital Audio Processor and the five amplifiers that Gigabyte packed onto the Assassin consisted of both in game testing along with music and Blu-Ray testing. In game, using my LanOC orange Steel Series Siberia v2 I found the amplifier helped immensely in listening to the details. Small sounds like footsteps and the location of faraway gun fire were much easier to hear when compared to the same headset on our other test rigs. The audio quality overall was worlds better than other on board solutions, I found it difficult to stop listening to music once I started. The inclusion of the X-Fi audio onboard was a considerable improvement over what you would normally expect from onboard audio putting the G-1 Killer line ahead of almost every motherboard on the market for audio quality without the need to take up a PCI slot with an aftermarket sound card. 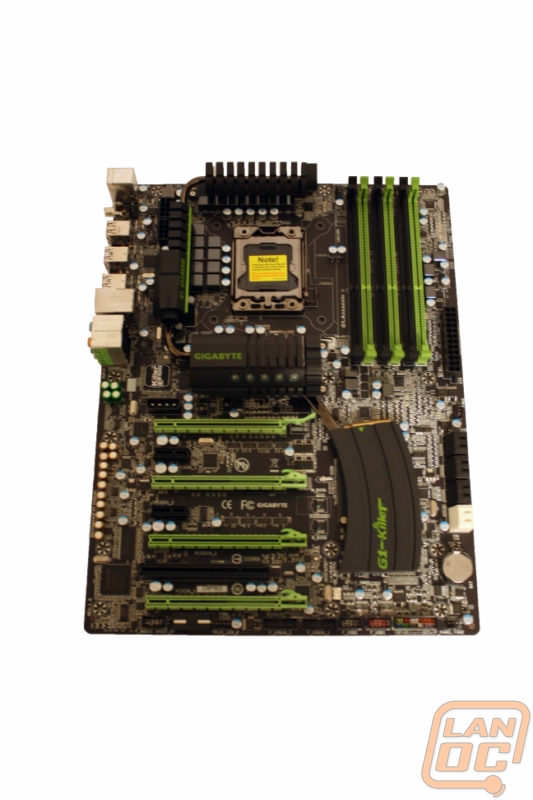 I mentioned it earlier but during testing I hooked up the drive bay device that Gigabyte includes with the G1 Assassin and put it through its paces. I found this to be extremely helpful as most of our cases around the office do not include USB 3.0. The two front ports it adds makes hooking up a USB 3.0 flash drive or hard drive a lot easier. In the past we have had to plug into the back, something that can be a pain when the PC is on the floor. For those of you who don’t have many or any USB 3.0 devices the eSATA/USB plug may also come in handy. The overclock button included on the front panel is also very cool and reminded me of the old turbo buttons you would find on early PC’s but this time around the button gives you a performance boost that may help you get the edge in the middle of a fire fight. 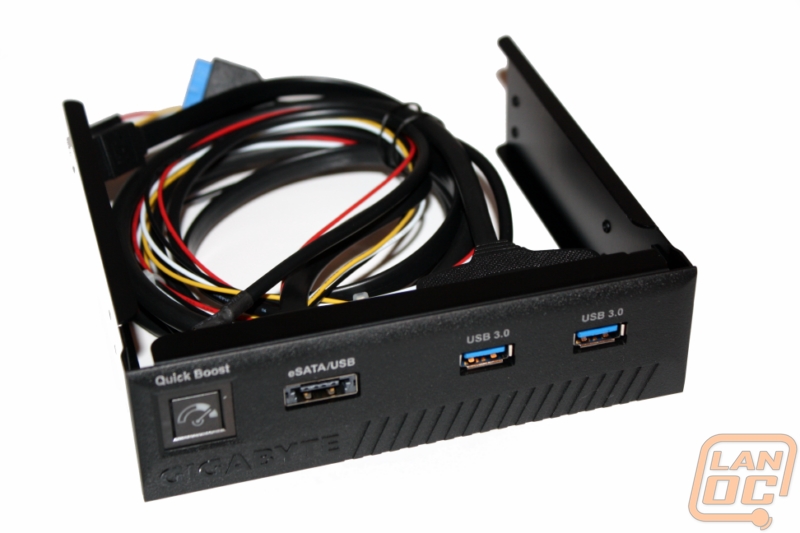 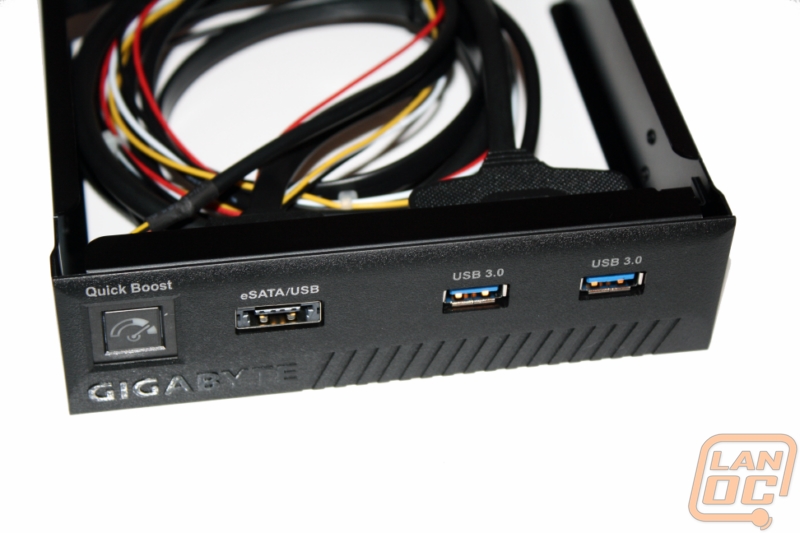 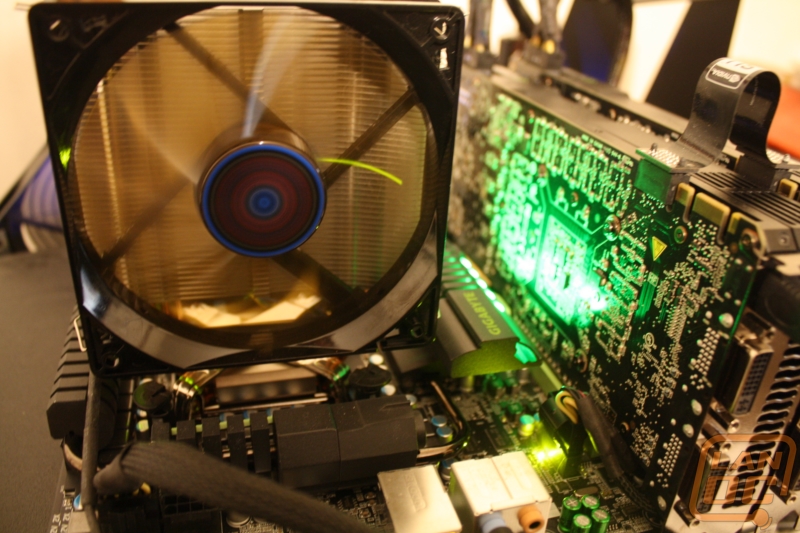