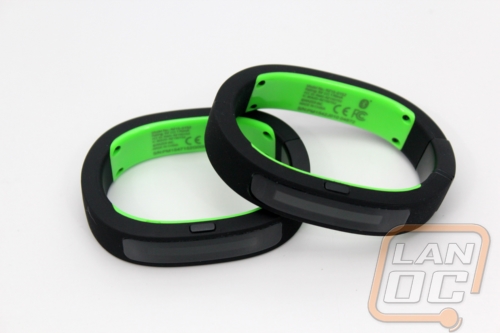 In the case of the Nabu, the software is so integral in the overall performance that I figured I would be best to combine the two sections. Before I get into overall performance over our month of testing I did want to talk a little about overall fitment and comfort. If you are going to wear something it is important for it to fit well and for it to be comfortable, if not you aren’t going to stick with it. So the Nabu is available in two sizes, what they call the Small/Medium and the Medium/Large. I think a better description of the sizing would actually be Small and Medium. Now Razer has been more than open with their sizing, not only does the package have a sizing guide right on it. But you can also download and print one before buying and even our marketing rep explained that the sizing run on the smaller side. So going into this review I knew what they offered. Overall I am a big guy but my wrists aren’t huge, watches fit me without issues and whatnot. I knew the Nabu would be tight, but I had hoped it would still work for me. Sadly, when it came in I knew right away that it was just a touch too large for me. In doing some research online I found that a LOT of people have run into this, so much so that someone even went out of their way to design an extension. I’m waiting for an official confirmation, but rumor has it Razer has recognized this and is actually bringing out a larger clasp to help as well. 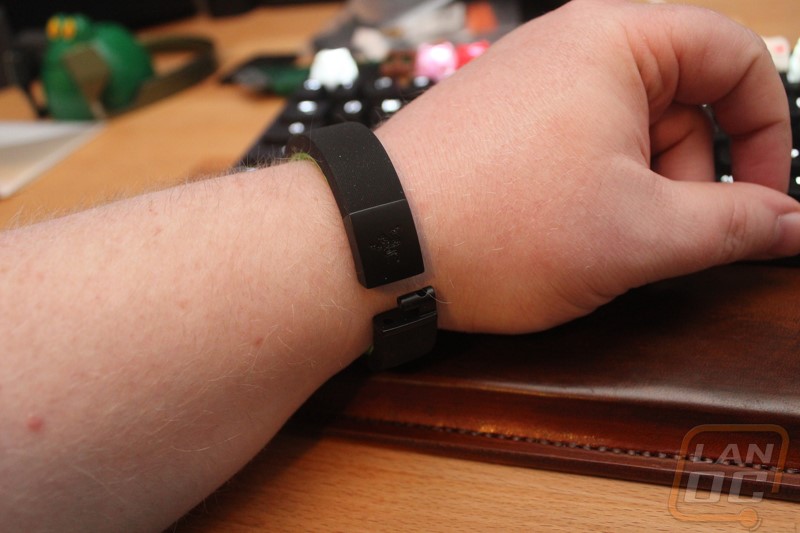 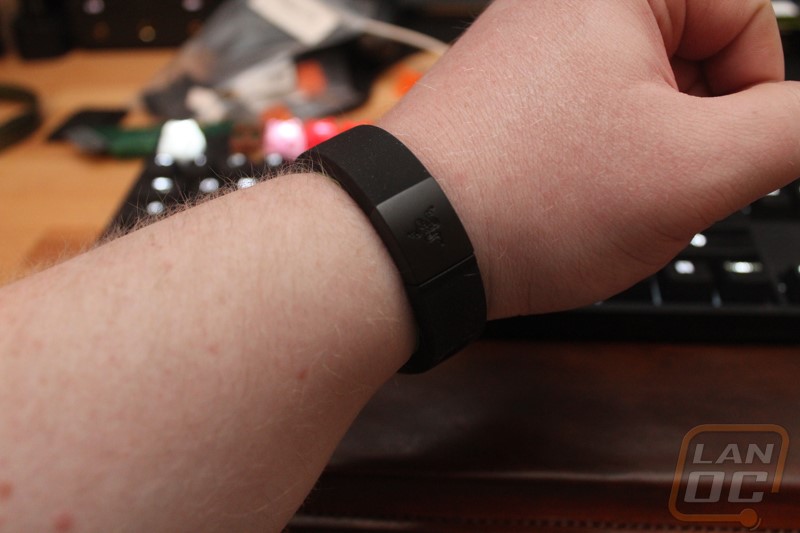 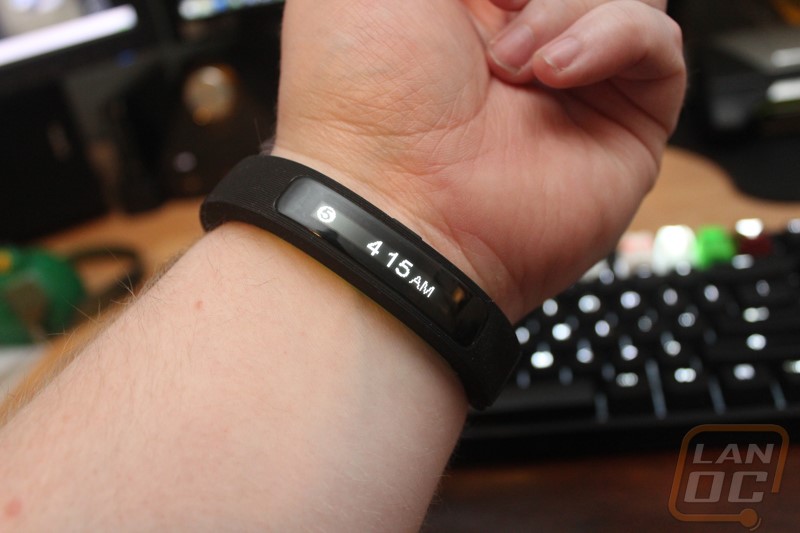 Anyhow, so most of our testing ended up being on my wife’s Nabu. I did spend a lot of time in the office wearing mine with it latched tight or with it unlatched but that wasn’t an option when being on the go. So anyhow beyond the issue of the Nabu lacking a proper large size, I did like that they included the second clasp. Being a solid band having even just a little room to get the fir just right was very important. In my wife’s case she ran with the small band with the small clasp. As far as comfort goes it took her a few days to adjust to wearing the Nabu every day. She used to wear a watch but it has been a few years so the first few days she complained about it irritating her skin a little but that quickly went away. For women the design is a little thick, at least when compared to a women’s watch. Men who wear a watch will find the design to be thinner than any of the big and bulky men’s watches. 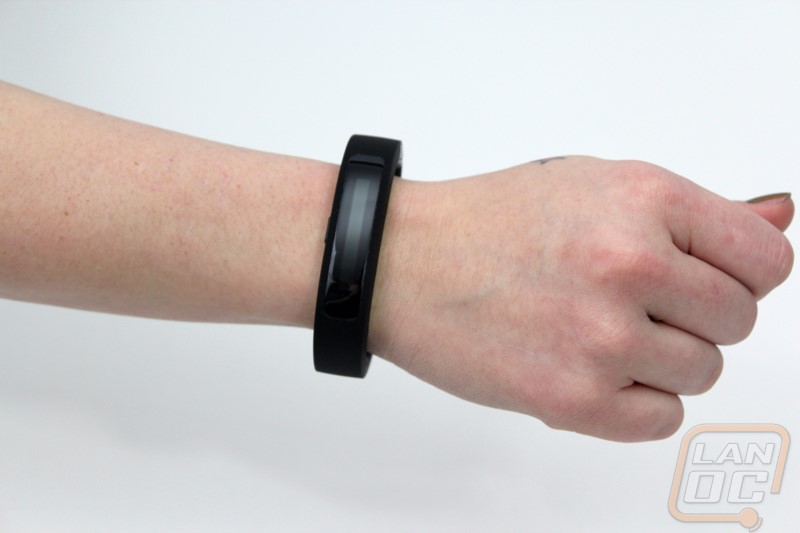 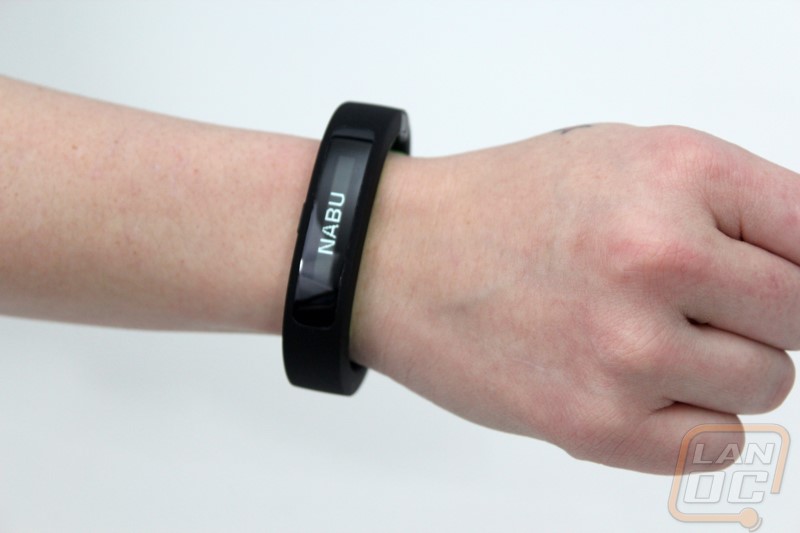 The hardware in this case is only half of what the Nabu is about. Using the Nabu or any fitness band is all about being able to track how active you are. For that Razer has the Nabu app on iOS and Android, for our testing we used Android. As soon as you open up the app you can see when your last sync was and all of the stats for today. Each stat has a bar under it to help show how far you are into your goal for the day and if you click on any specific stat you can open it up and see even more information. 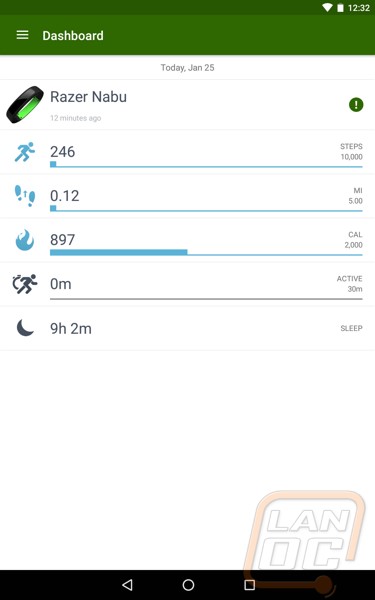 For example, you can see how many steps you did each day. They also break it down week by week. The days that you reach your daily goal Razer even gives you a green star. If going to kindergarten taught me anything is that people like getting stars! You can do this for all of the stats that the software tracks. If you want, you can even graph everything out if you are more of a visual person. The graph page is nice because there are options to see a week, month, 3 months, and a year all at once. This lets you see trends, for example with my wife we can see the drastic difference in how active she is on her days off and the days she works. I also love that you can see the total for the period you are looking at, so of the partial month that she has been wearing the Nabu she has almost 140k steps. 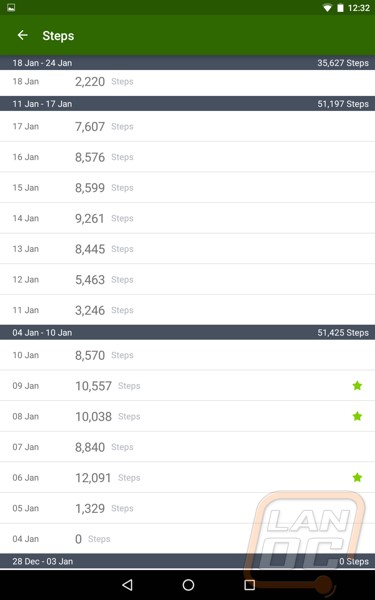 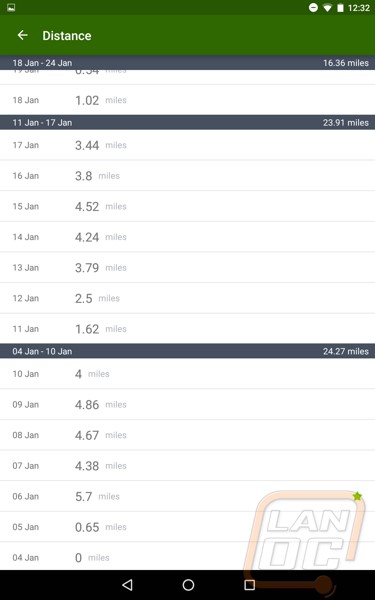 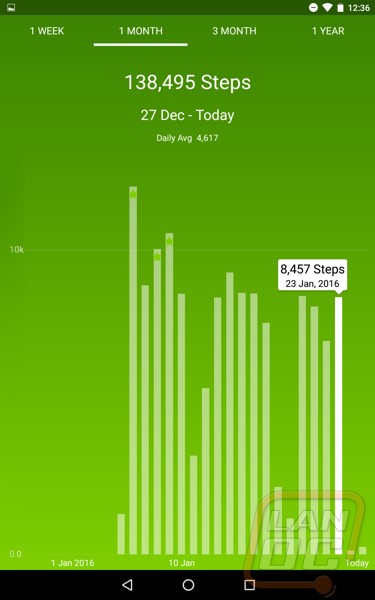 The Nabu also tracks your sleeping and for me this was one of the most interesting ideas behind wearing a fitness band. Specifically, there are times were you wake up and you just don’t feel wrested. I was very curious if those times I’m maybe waking up and I don’t remember it or if I’m tossing and turning. The graphing of sleep can be set to be tracked manually where you tell the app when you go to bed or it can do it automatically. Reading back over peoples past experience with the Nabu some people had issues with sleep tracking but it worked great for us. It was quick to pick up when my wife went to bed, times she got up in the middle of the night, and as you can see in the graph below just how restless she can get at times. The only problem I had was that the way it is graphed also didn’t really let you pinpoint the time that things happened. The graph is good for getting an overall picture, but there is still room to improve. 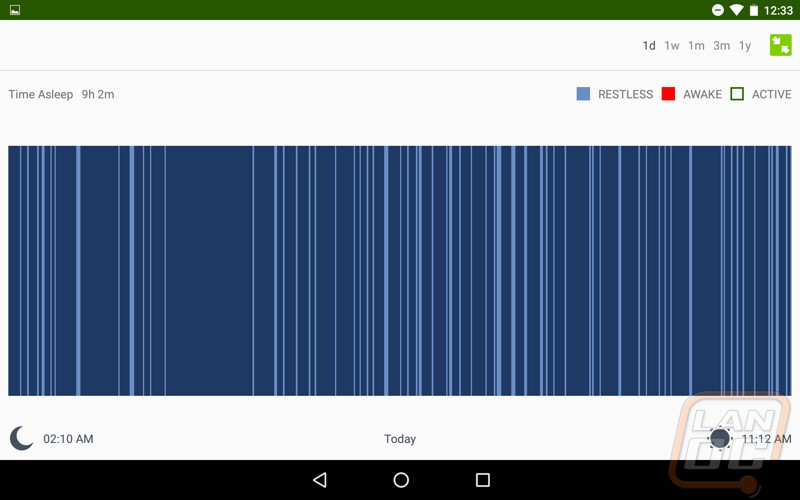 Navigating the rest of the app would take us into settings pages like the easy to access goals page where you can set your daily goals to get those green stars. Down in the settings you can turn on silent alarms, basically a way to wake yourself up or notify yourself without waking up or bothering the people around you or your spouse in bed for example. Being such an interesting feature I was very surprised that Razer buried it all the way in the settings where you would most likely never use it when it could have been on the main options page along with your dashboard, goals, and devices. Also in the settings you can specify what apps you want to get notifications from and you can even turn on a do not disturb mode if you want. 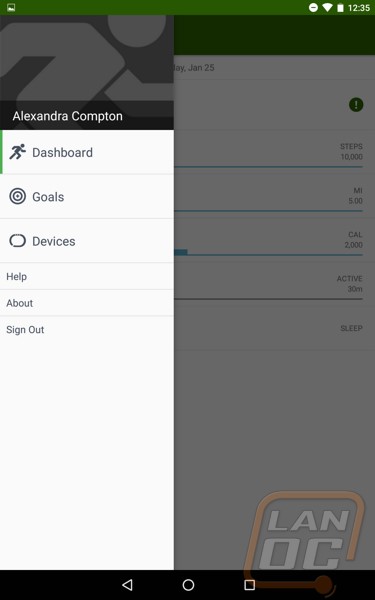 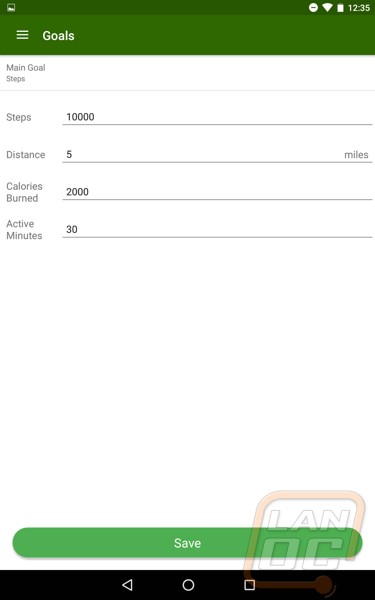 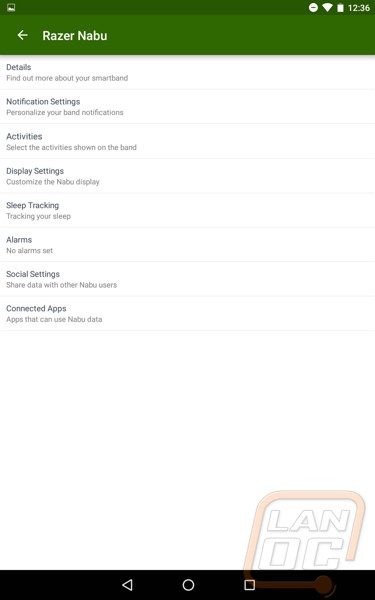 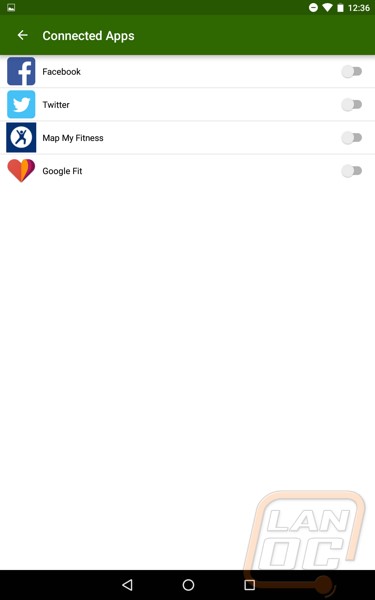 I think the most interesting and potentially useful features of the Nabu is actually the social sharing feature. The way it works is if you shake hands or interact with someone else who has a Nabu on you can set it to go ahead and share your Twitter or Facebook information. It is the digital equivalent to sharing a business card with someone. The only issue of course it only works with others who have a Nabu and frankly you just aren’t going to run into that enough to make real use of the feature.

Where I felt Razer could improve though was the lack of the social competition that Fitbit has really tapped into. Being able to see your friends steps and activity can be a big motivator. I also feel like they are missing out a bit by not focusing more on the Gaming side of things. Specifically let’s see achievements or maybe integrate being active with a Nabu on a game itself. The hint at a zombie apocalypse on the Nabu homepage, something like Zombies, Run! Would be a perfect addition to the Nabu. I don’t know how possible it is, but friend status notifications from steam or your consoles would make the Nabu more interesting for example.

Being a battery powered device the Nabu is of course going to have to be charged from time to time. The problem of course is when you are charging it you are also not tracking. So good battery life is important, as is being able to quickly charge the device. In my wife’s testing the first time she used it the Nabu hardly went a full day before needing charged. This was alarming because Razer suggested we would see up to 6 days of life on a charge. After looking into it I found that she was actually wearing the band with the display screen up like you would a watch. While it isn’t a problem, you do have to let the device know you are wearing it like this or the screen will turn on all of the time. She turned off the auto screen all together and went 8 full days without charging before the Nabu was down to 13% battery life. The life will depend on your settings of course and just how often you get notifications as the vibration and display will blast through the battery life. Speaking of battery life, having the sync on for her tablet really sucked down the battery on her tablet. To fix that she turns off Bluetooth but I noticed that without having it sync all of the time it takes a surprisingly long time to get her daily sync done. It’s not a big issue, but something I did want to mention.

Life with the Nabu wasn’t just about tracking your steps. In fact, for me at least I found that it was a great way to quickly check my notifications without constantly letting my phone take over my life. When I check a notification I almost always end up looking at other things, browsing Facebook for a few minutes or even getting on Reddit. With the Nabu it was quick and easy, I would see the email, text, or Facebook notification and a good portion of those don’t require any more interaction. That said I do wish the Nabu still had the larger screen of the previous model. Reading a notification on the one-line display is a little less than ideal and a bit time consuming.