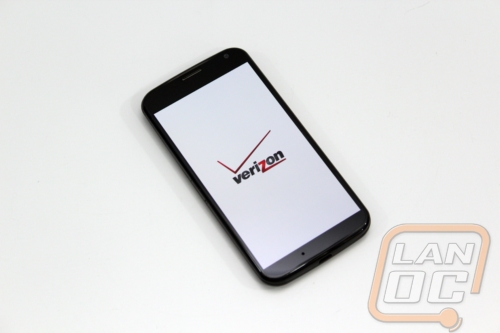 When it came to our performance testing, even though the MAXX had the same configuration I was still impressed with the Moto X’s performance in all of the benchmarks.  This was especially impressive in 3DMark and Browsermark 2.0 where the Moto X topped the charts by a good margin. Motorola packed a nice setup into a fairly small package with the X. Its X8 “Computing System” does very well with its dual core snapdragon processor, quad core GPU, and two additional cores for a natural language processor and a contextual computing processor. 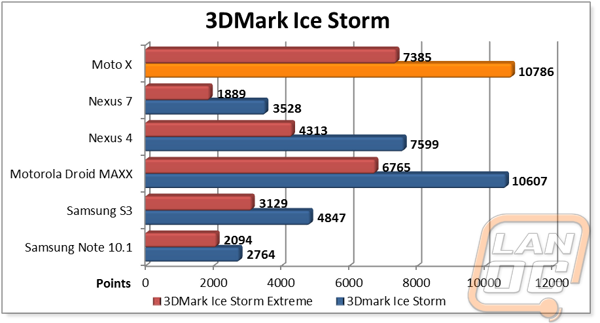 When it comes to battery life, I think anything would feel low compared to the MAXX that I came from. But the Moto X came in around where you would expect from a phone with a typical sized battery. That put the Moto X in between the Nexus 4 and the S3, both aren’t exactly known for their battery performance, but it’s enough to get you through a day of average use. If you use your phone more than average you might want to consider keeping a charger close or check out the MAXX.

Beyond the numbers, if you pick up a Moto X now you will be getting 4.4 Kit Kat with just a few small changes that are specific to Motorola phones. I love that they keep the phone fairly pure, but the features they do include are really nice. For example you can set the Moto X to open the camera for you when you flick your wrist, making on the fly pictures much easier. The rest of its features revolve around Google Now and its voice controls. Truthfully though, as much as I loved them, I had to turn them off. All too often it would activate itself when listening to music or just when talking.

As for its network performance, our phone was provided by Verizon. As always I was impressed with both the speed and lack of deadzones. Here in the middle of nowhere I still get 4G but when we were in Columbus for MLG we saw what 4G was really capable of with around 20 down and 15 up. Considering that upload speed is three times what my home internet upload speed is, I would say it performed well.

garfi3ld replied the topic: #33398 03 Dec 2013 13:48
Back from an extended holiday, we have a review of the Moto X. You have most likely seen the commercials showing off how you can custom build one. Now see what it can do!
Read More...