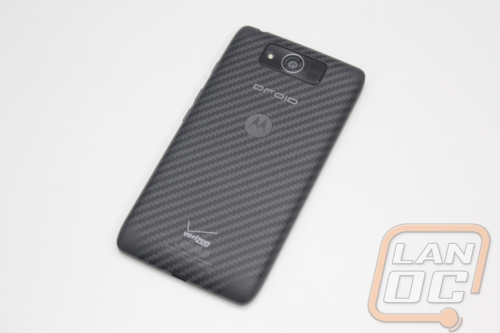 Along with putting the phone to use day to day, I also put it through our standard benchmark suite. To start things off I ran it through both the normal and Extreme Ice Storm benchmarks to see how it performed. As you can see from the results below, the MAXX dominated the other phones that we have run through that same benchmark. For the first time, 3DMark even recommended that we bump the benchmark up to the Extreme Ice Storm because it performed so well. Even in the Extreme benchmark nothing came close though. 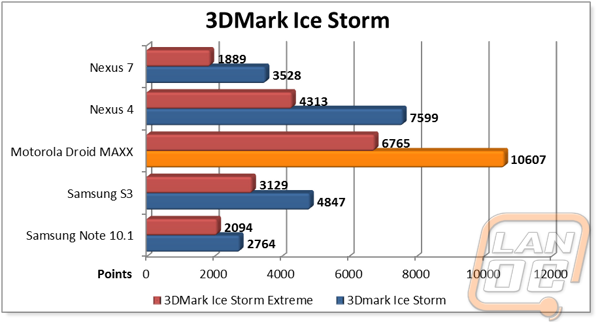 Next I ran a few browser based benchmarks that we use. Because they are browser based sometimes you will see different results depending on the browser you use, for example in the past the chrome browser on Android has performed a little low. In Octane v1 the MAXX pulled ahead again with the closest being the Note 2 with its quad core CPU. In SunSpider the lowest result is the best meaning the Note 2 outperformed the MAXX. Lastly in Browsermark 2.0 the MAXX came in third, this is where I expected it to be. The Nexus 7 and 4 performed a little lower here due to chrome but the MAXX did still outperform the Note 2 but the S3 and Z10 bested it.

In my last set of tests I ran through a rendering benchmark in GLBenchmark 2.5.1, the MAXX pulled an FPS of 41 with the Nexus 4 being the only other device to come close with a37 FPS. GLBenchmark also has our battery benchmark. How it works is that same rendering is run through from a full battery all the way until we hit 5% battery charge. Considering the MAXX’s performance I was a little worried that its better capability’s might actually hurt the results of this benchmark. But in the end the MAXX did still out live all of the phones and tablets in our test. This is great considering some of the devices tested have large batteries as well due to their larger size. While testing I did find another interesting result. The first pass I did with this benchmark was accidentally with the wireless and mobile network on, normally I turn these off during the test for consistency. Oddly enough after retesting I noticed that the MAXX actually went an additional 10 minutes with everything turned on, all the while receiving my emails, texts, and facebook notifications. The result in the chart below was the airplane mode result though, for fairness. By the way, over 4 and a half hours while running a 3D rendering in loop is extremely impressive.

So outside of the benchmarks, how did the Droid MAXX perform in use? Well as someone who is constantly checking my phone It is very easy for me to kill batteries long before my day is over. To put the MAXX to the test I used it exclusively the weekend of our LAN. Not only do I get far too many calls, texts, and emails that weekend, but the building we use is right at the edge of our rural 4g coverage and it is a metal building. As you can imagine everyone there had issues with battery life with their phones working extra hard connecting between two towers. The end result was me not having to worry about my battery life until late in the second day and even then I only charged to make sure I wouldn’t have to worry about my alarm not going off. Even better for me was the Droid MAXXs wireless charging ability. Here in the office I could just drop the phone on the same wireless charger I use to keep my Nexus 4 charged.

Beyond the battery life there was another feature of the MAXX that I am going to miss when I send it back to Verizon. I have never had a phone with a speaker this loud before. I can admit that my hearing isn’t always the best, but there was never a time that I slept through an alarm or didn’t hear my notification. I can’t say the same for my Nexus 4, I sleep through phone calls and alarms ALL of the time with it. The speaker was so impressive that my wife actually made me turn it down; because it startled her each time I received a notification.

I would love to say that the MAXXs camera performed as well as its battery life, but I will be honest and say that it seemed to be hit and miss. Low light photography suffered but even with good light I felt like sometimes a photo would come out great while other pictures wouldn’t.

How was the UI? Well the Google ownership is starting to show here. The UI was only slightly modified from the stock Android UI and I love that they went that route. You do get a couple widgets from Motorola like an interesting home page weather/time widget that lets you flip the sections over to watch weather and time in multiple areas. As usual the MAXX comes with a list of apps installed that you wouldn’t find on a pure Android experience, some like mobile hotspot are important for your Verizon experience but I could do without the Amazon apps. I will say I found myself putting the IMDB app to use more than expected in situations that I would just normally use google. The last feature that I really liked was the ability to skip the lock screen all together when you check your phone after a notification and have the message right there for you.