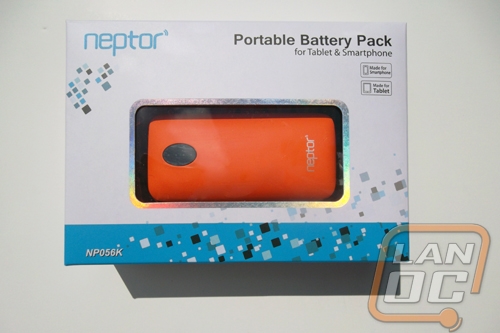 Being a portable battery, the NP056K’s primary function is to charge USB devices. While it accomplishes this quite well, it only has a single port available to charge tablets and the like. This isn’t an issue for most but I would have still liked to see more flexibility there. As it stands though, the Neptor battery can handle a pair of smart phones at the same time with ease and the charging speed on the 2.1A port is extremely fast though it does appear to drain the battery faster.

As you can imagine, the full charging time on these portable batteries is quite long and the Neptor is no different taking an average of around 4-5 hours to reach its full 5600mAh capacity when plugged into one of my PC’s USB 3.0 ports. That being said, The NP056K shows the same power efficiency I noticed in the Luxa2 P1 with its ability to maintain a charge for extended periods of time when left to sit and do nothing. After a week of lying on my desk that battery still reports the same charge and is ready for action with a single press of the power button. The ability to act as emergency power is an amazing addition.

My Droid 4 was once again without its battery as I put the Neptor’s longevity to the test and it didn’t disappoint. Serving as my phone’s sole power source for a shade over three days, this little battery impressed me especially with a smaller capacity then the previously reviewed Luxa2 offering. Of course the charging capacity is dependent on what you are charging as well as other things such as how long you use the built in LED flashlight so there are some variables to account for.

The 2.1Amp port meant for tablets serves its intended purpose but as I previously mentioned, charging power hungry devices with the Neptor results in a shorter lifetime for that particular charge. Still, in a pinch, it will provide you the power you need.

We have 834 guests and one member online