Over the past 10 years there has quietly been a small change in the mobile computer market that I don’t think everything has noticed. The name laptop has slowly been dropped and everyone uses the term notebook now. This might seem like a small change but this was actually to help prevent issues for a lot of manufactures. You see, with the name laptop, a lot of people would actually use them on their laps sometimes causing overheating issues. Even now with the new name, heat is still a concern. That is exactly why we have products like Cooler Masters new Notepal Ergostand II.Today I am going to take a look and see what has changed from the original.

The packaging for the Ergostand II is very similar to a laptop, which makes since in the fact that it is both designed for laptops and because the size and shape are very similar to that of a laptop. On the front of the rectangular box we get a few different looks at the Ergostand II in action. Right away we can see a couple of different angles that the stand can prop our devices up at. On top of those images we also get to see a picture of the device actually in use at the bottom right hand corner of the box.  On the bottom left hand corner we see that the stand has an ergonomic design, removable mesh, and that it supports up to 17” devices. In the top left hand corner we see a bit of branding in the Cooler Master logo. 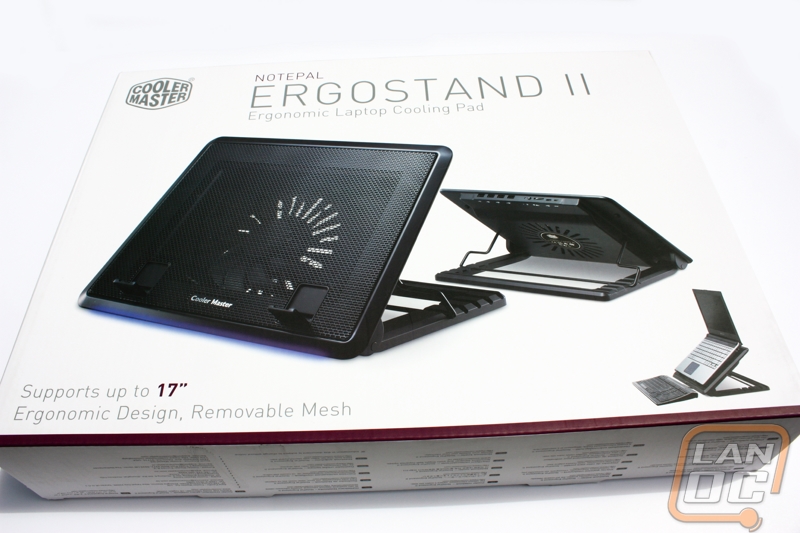 On the bottom of the package we see a short blurb with the name of the product and the website to visit in order to get more information. This info is listed in a number of different languages so that everyone around the world might understand it. 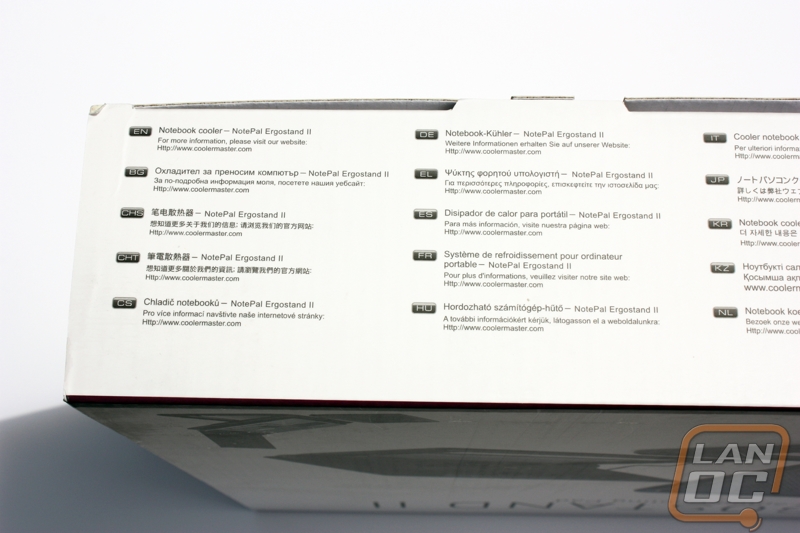 On the back the first thing I noticed was obviously the pictures. Each picture highlights or shows a different feature of the Ergostand II. For instance one picture shows off the adjustable ergonomic design, while another shows off the four USB ports and adjustable fan speed control. It like having a list of features but in picture book format! The next thing I see is the actual feature list, it’s like the awesome pictures we have, but words instead. At least the words appear in multiple different languages again, so if you happen to be illiterate you can feel silly in ten different tongues. The final thing of interest on the back of the box is the specifications chart, which can also be found towards the start of this review. It lists basic information such as dimensions, weight, fan speeds, power, and material of which the product is made. 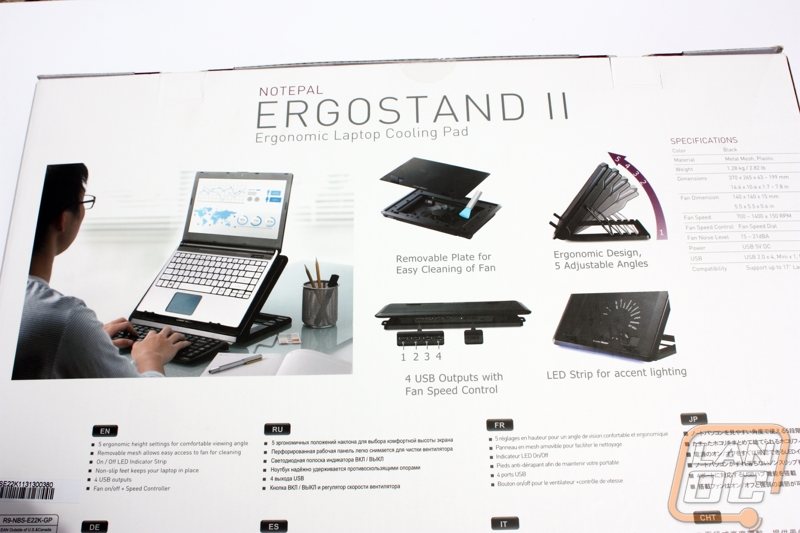 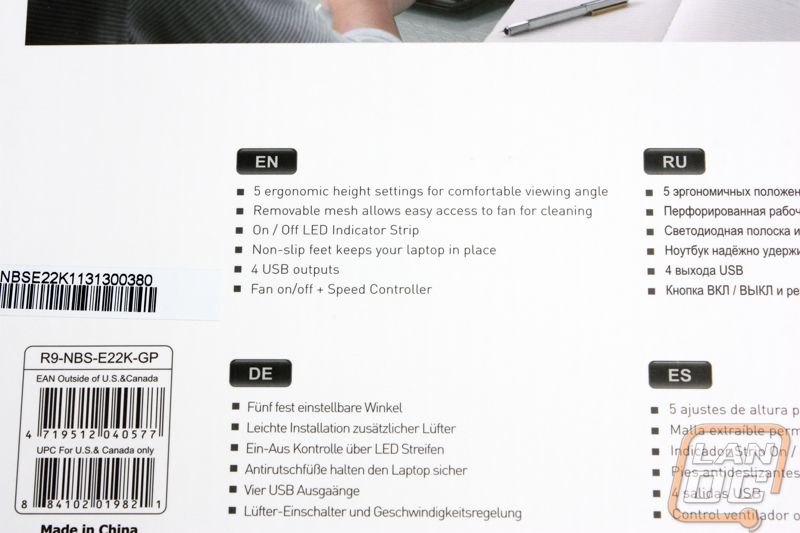 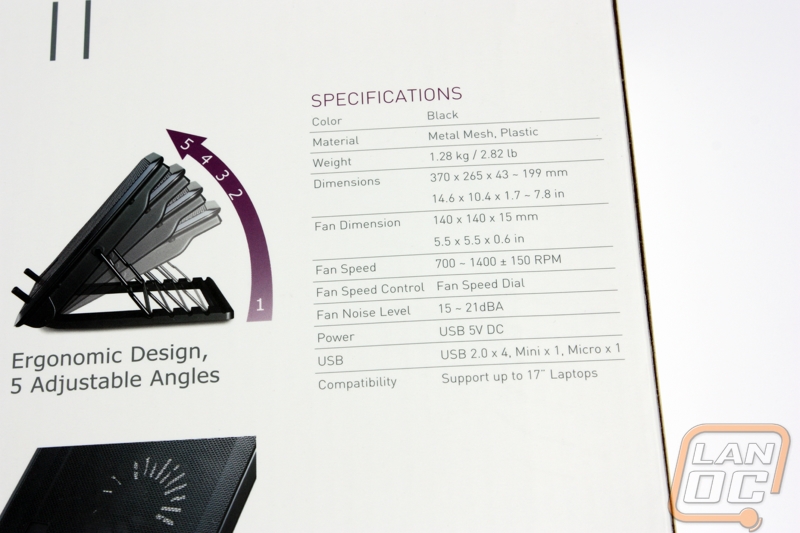 Finally we head to the sides and the top. The sides are rather uneventful, only another picture of the product and the product name is to be found. Again we see some more Cooler Master branding, but it has been kept to a minimum so it isn’t annoying at all. On the top there is no information or pictures, but there is something pretty cool. There is a handle located at the top for carrying the box around, this is awesome if you are the type of person like myself who tries to keep everything in its original packaging when moving it around. It also makes it incredibly easy to just transport the device with you. With its size and shape it could be a bit awkward to carry around without a box, kind of like a laptop without a bag, but having the handle on the box makes it easier to take with you on a trip. 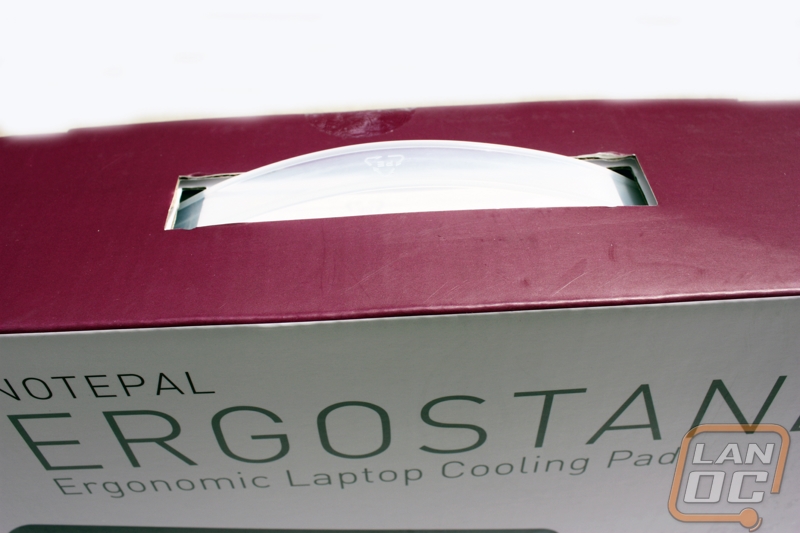 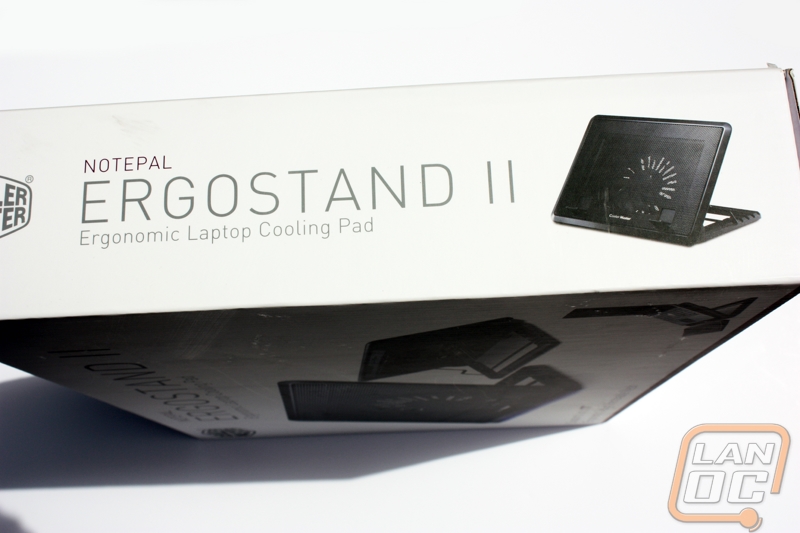 Inside we find the Ergostand II wrapped up in plastic and tucked into two molded foam shipping pieces. This is to keep the stand from getting banged around and scratched up in transport. Also inside the box is our packaged cable. This cable will give us power from our laptop via USB to the Ergostand II so that the fan may actually run. Finally we have a short user guide, which is nice, but seems a bit unneeded, because how hard can a laptop stand really be to use? I know I will regret saying that when I go to set it up and ask myself, what goes where? I don’t even. 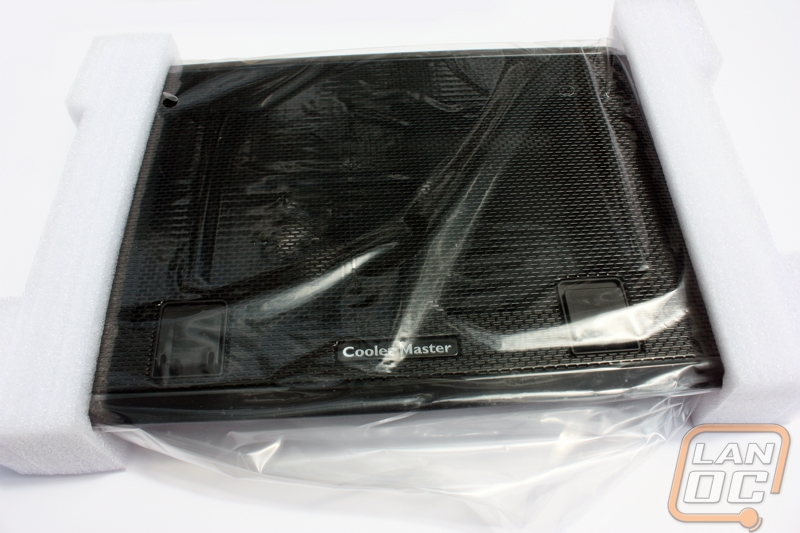 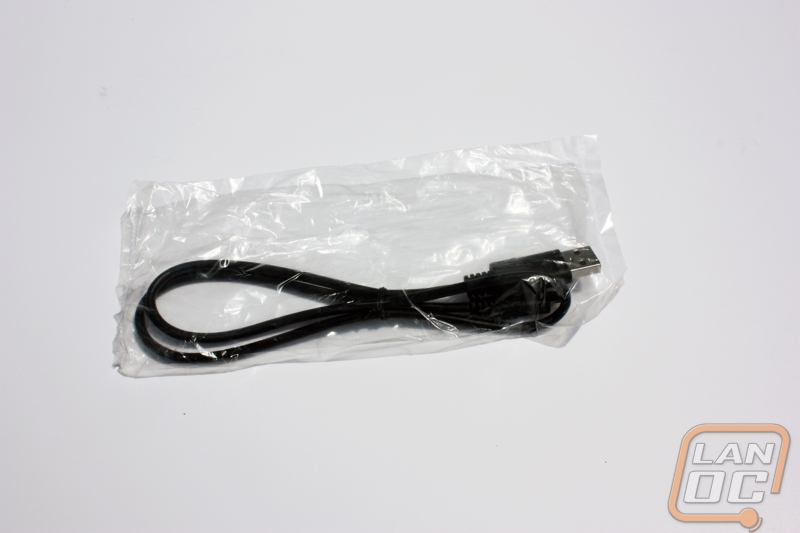 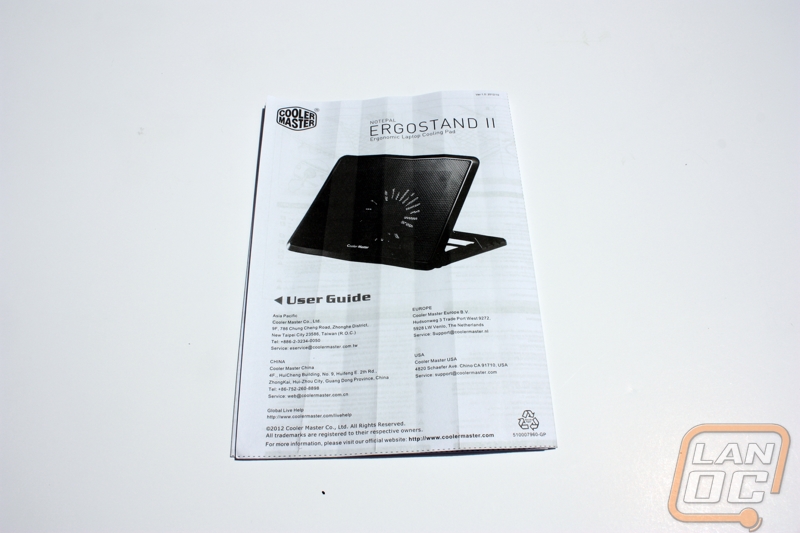 We typically would do a separate section for installation, but the process for installing the Ergostand II is so simple we just figured we would tack it on to the beginning of this section. First you are going to want to put the feet of the device out. The design of the feet is much different than the design of the feet on the initial Ergostand, and while I think these feet may break easier, at least I will have both of them. I have only had one foot on my other Ergostand for about four months now, and it makes it impossible to use! 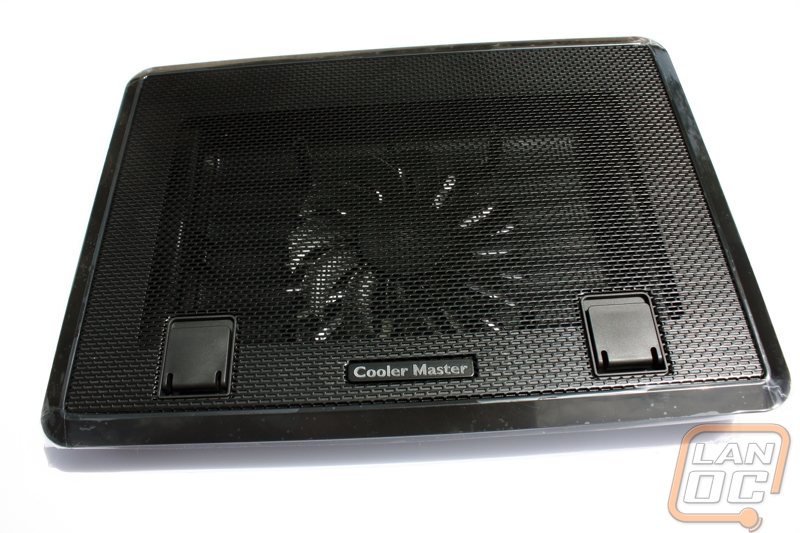 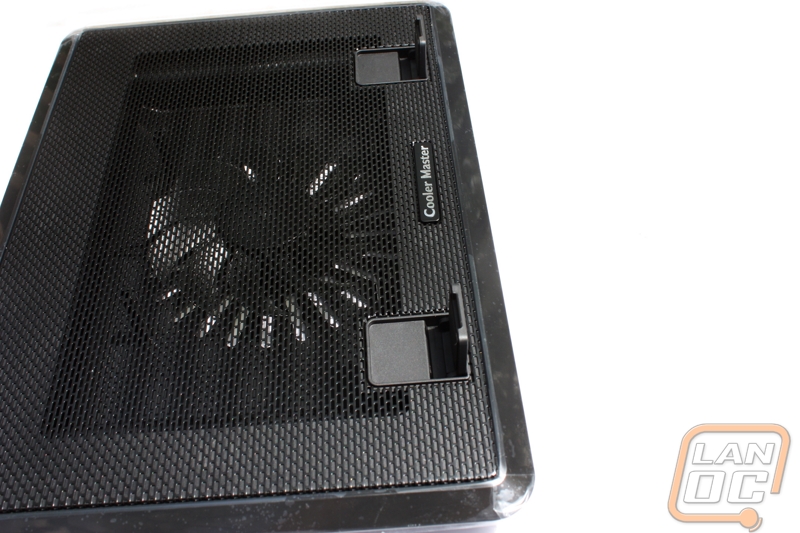 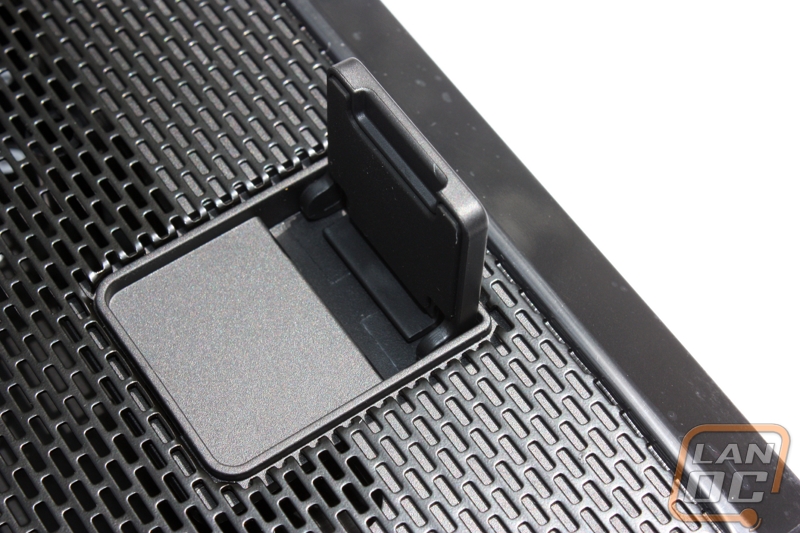 After the feet are set up we need to select the angle at which we want to use the stand. This will depend a lot on how you are going to be positioned, and where you will be sitting. The stand has five different viewing angles, from completely flat on the table to almost completely vertical. It is nice because it gives you a wide range of options to use in different situations where you might need to view the laptop from a different position. Typically it will come down to personal preference and how you want to view the laptop. 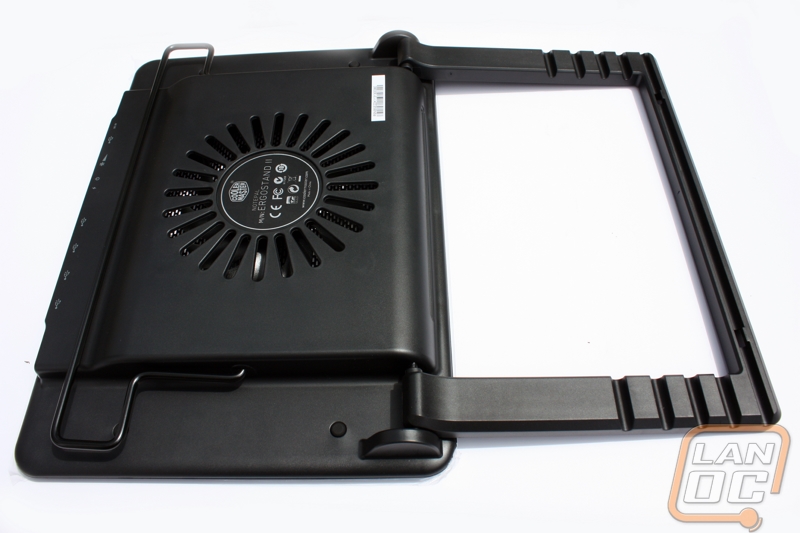 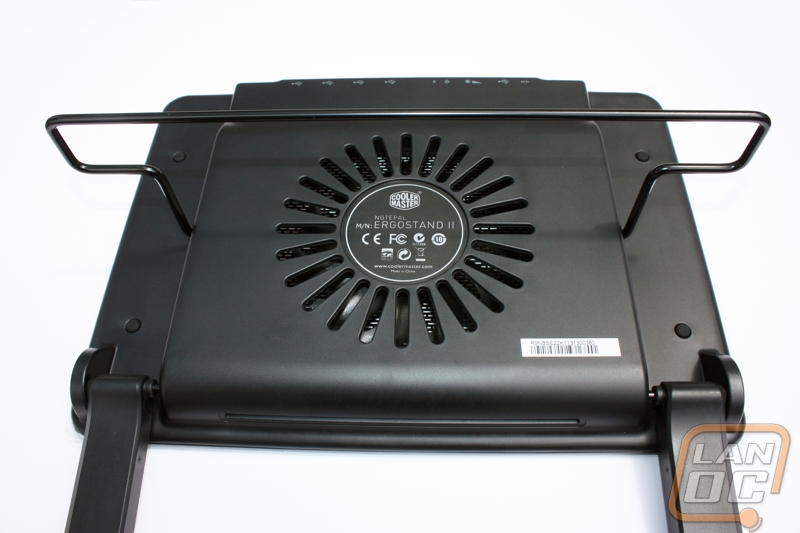 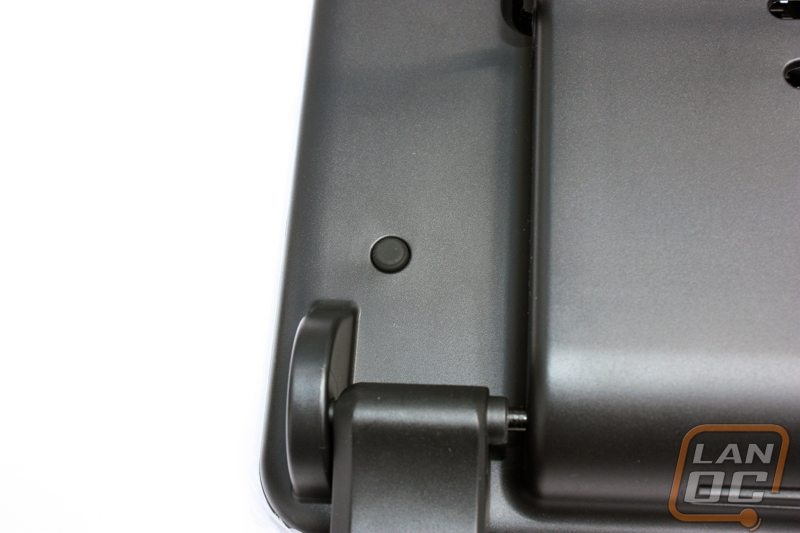 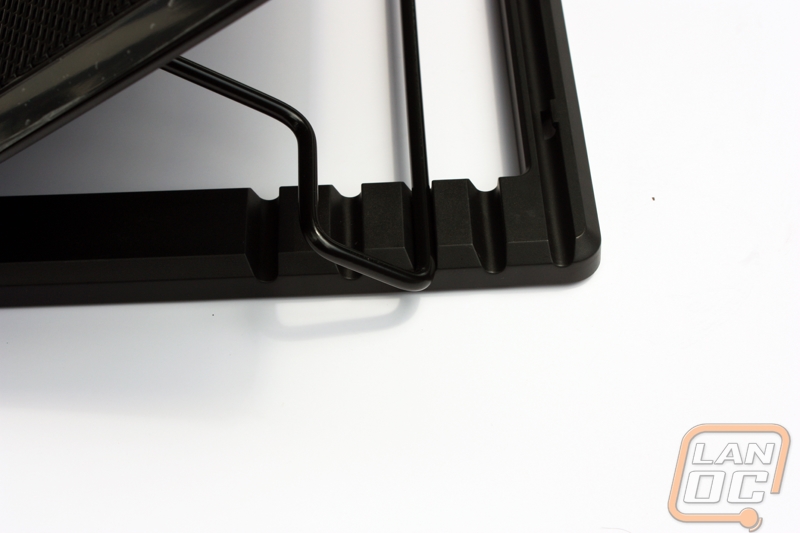 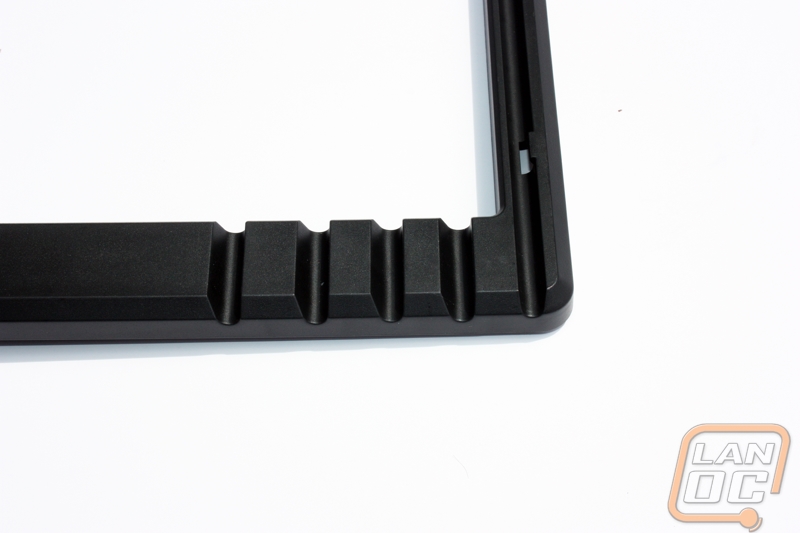 Once your viewing angle is all set up it is time to make sure the machine has power. This is probably the simplest step of them all. You will need to run the USB power cable that came with the device from your laptop into the back of the Ergostand II. Once it is plugged in you should start hearing the fan right away. If not, try turning up the fan speed, which is another cool feature because you can adjust how much cooling you need depending on what you are doing. If you turn up the fan speed and nothing happens, you might want to click the power button on the Ergostand, I hear giving things power helps tremendously when trying to get them to do things. You can also tell that the device has power by the strip of blue LED located on the back. 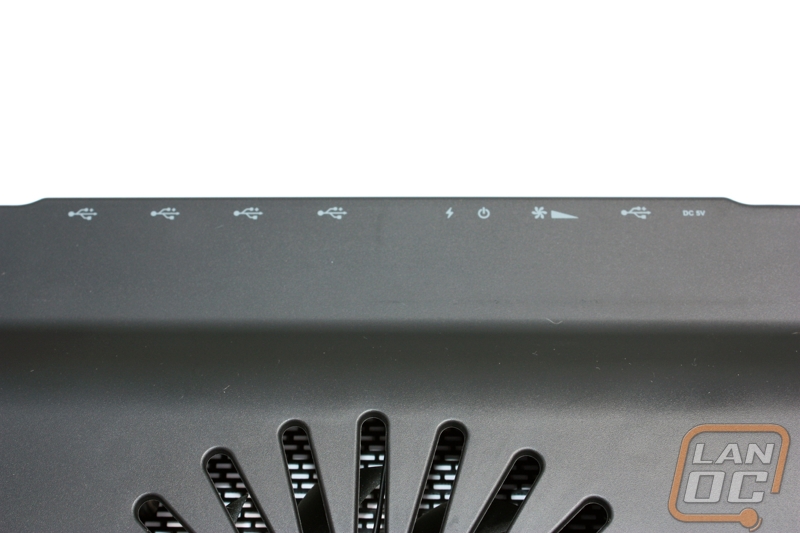 Some of the features have been listed above, but one that hasn’t been is the extra functionality of the Ergostand II. It has four separate USB ports for devices that you might want to charge while using the computer. This is awesome for two reasons, first you have extra USB ports which you can never have enough of now that everything is going to USB power. The second reason is that it takes the duty away from the computer. The overall goal of the Ergostand II is to cool the laptop down, making sure that the laptop doesn’t have to feed power to multiple devices is one way to do that. Just run the one USB to the stand itself and let the stand do all of the remaining power tasks. This probably makes a very minimal difference, but every little bit matters when we are talking about computers! Lastly, there is even a mini USB port for you to charge any devices that way. 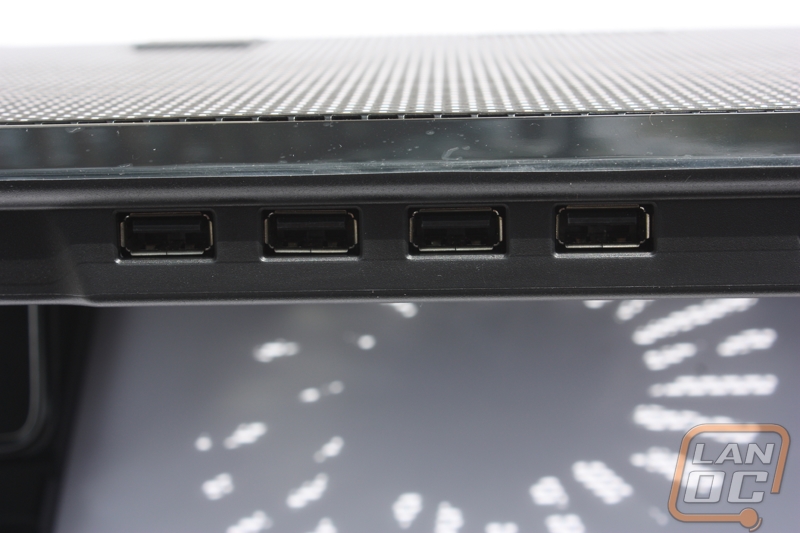 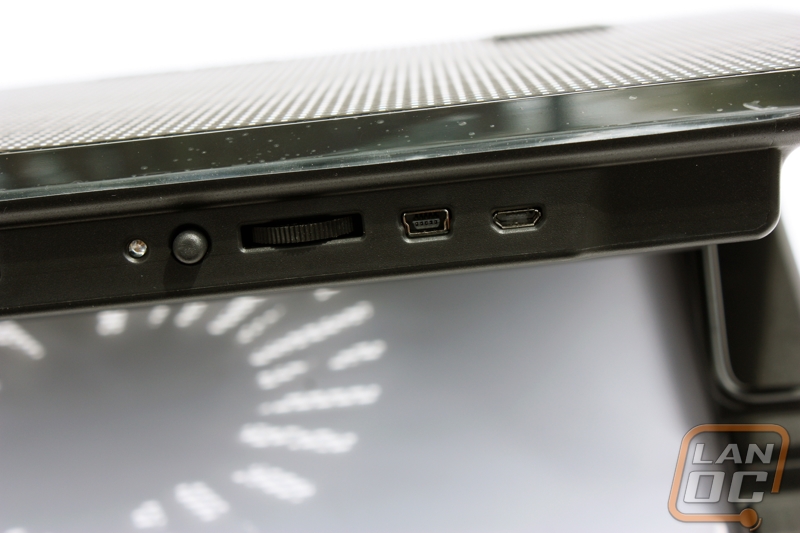 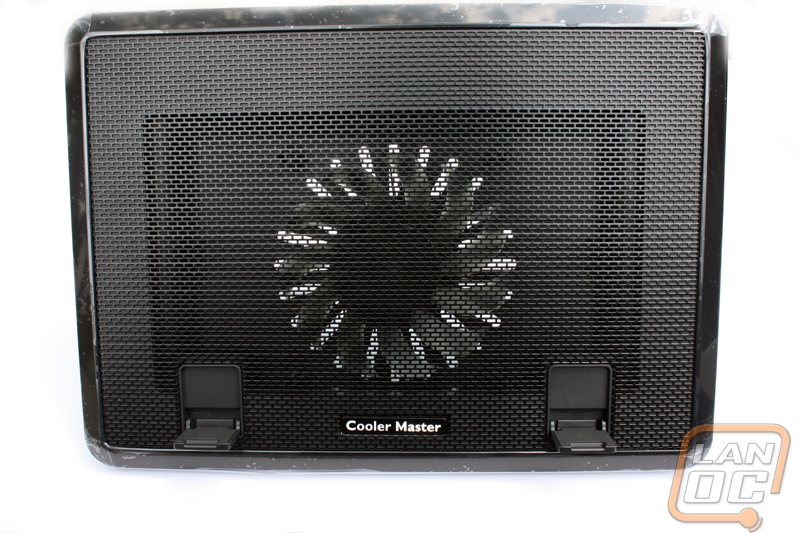 The process we used to test the Ergostand II was simple, yet not all inclusive. We downloaded Core Temp and made sure it was working before proceeding. We then put the computer under high load, in this case, trying to play a game of League with graphics settings it wasn’t made for. Now I know what you are thinking, League isn’t very demanding, and I know this, but my laptop isn’t top of the line, don’t judge me. After in game we let the game run for fifteen minutes before alt tabbing out and grabbing a screenshot of the results from core temp. We did this once using the stand and once without. When we used the stand, we set the fan to the maximum possible setting and let it run, namely because we wanted to see the biggest difference in results, what exactly was the machine capable of doing. And before you ask, we gave the laptop an hour to cool down before tests so they weren’t affected by one another.

We first tested it without the Ergostand. After our fifteen minute endeavor we saw the processor heat up to a maximum of 71 degrees Celsius. The minimum temperature is ignored because it will most likely be the temperature at the very start of testing. 71 Celsius doesn’t seem too bad at all; in fact I began to wonder if we had put enough stress on it during testing to get some accurate results. 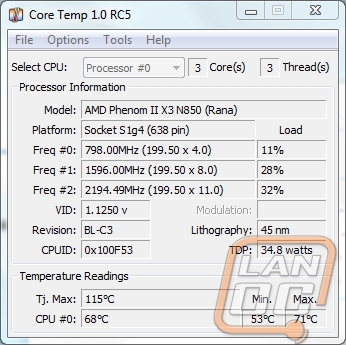 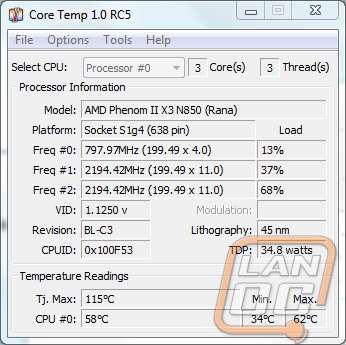 There is another function in the Ergostand that isn’t directly shown with our testing. See we only tested CPU temperature, and while it did a great job cooling the CPU, it doesn’t reflect all of the other components the Ergostand is cooling. The video card is the first thought that I had. I felt the base of my laptop where my video card is housed after both tests. After the uncooled test, the base of the laptop felt like it could cook an egg, however after the cooled test it was still warm, but not bodily injury warm. If we take that same observation and assume it to all of the other components on the laptop, the Ergostand II is doing an excellent job of not only cooling components, but also extending the life of our laptop.

At the end of the day I think that the Cooler Master Notepal Ergostand is a solid well rounded device. The small adjustments they made to the design over the first Ergostand such as the foldable feet to hold the laptop up, the extra size support, and the LED that lets you know when the device is plugged in, make for great improvements to the overall functionality of the device. The nine degree change in temperature over the course of testing was incredible, especially when you consider that it was a 12% change. It wasn’t just the measurable changes that excited us either, the change in surface temperature upon touching the base of the laptop bodes only good things for the rest of the device. The Ergostand II is priced at $39.99, which is competitive, but a bit on the high side. With that said, I do think that you are getting exactly what you pay for with this device. It is solid and well-rounded and will go a long way in making sure that things stay cool. 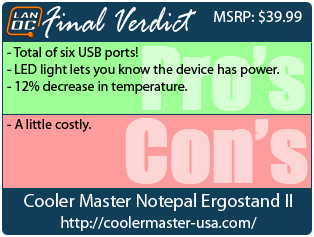 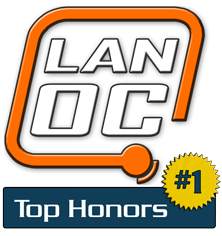