I think the best testament to the Power Fort is that I want one in my bag. I will definitely get one just as an “emergency backup” in case I really need it. It’s performance is exemplary and it charged my phone must faster than my wall charger, which means it is less time the phone has to be tethered to the Power Fort. It’s no heavier than the Mophie JuicePack attached to the phone, and contains larger battery storage than the Mophie. It even comes with a nice little carrying pouch to keep it from getting scuffed up. Remember kids; keep the greasy side down and the shiny side up!

Also, since we are talking iPhone, the JuicePack for the iPhone is pricey. The Power Fort comes in with an MSRP of $69.99, which undercuts the Mophie by $30.

I also do not like the black shiny finish. On some devices it is great, but the Power Fort is something that is likely going to be tossed into a bag or some other place where it will get scratched and scuffed. Heck, even if you keep a USB cable in the little pouch with the Power Fort the USB cable is likely to scratch it up. It is pretty when it is new, but it probably will not be pretty a few months from now!

Overall, the Power Fort's pros outweigh its cons? Why? It does everything it claims to do exactly as advertised. It is refreshing to see claims that are not exaggerated or something that can be only duplicated in a lab. I will grant the Power Fort an eight out of ten due to the issues that I have mentioned. But if you are a mobile professional, one of these absolutely need to be in your bag. If you are looking to purchase one, be sure you are getting the 5600mAh version with the 2.1amp fast charging, and not the previous version! 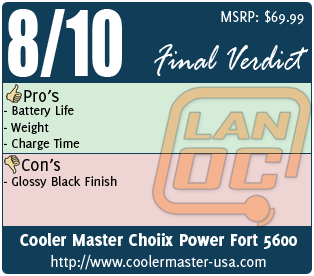