Recently we reviewed a few items from Arctic Cooling that help gamers stay cool under pressure. A gamer won't get the opportunity though if their rig can't do the same. You don't have to have a top-of-the-line gaming laptop to worry about its temps; the nature of all that hardware in such a little space is cause enough to create concerns. Arctic Cooling has also has a solution for your mobile computing companion, and today we sit down with the notebook cooler to put it to the gamer's test.

Packaging
Arctic Cooling continues to let the product speak for itself as we saw with earlier items. In lieu of graphic arts, the Arctic NC is exposed to the eyes of the consumer directly through a clear plastic casing. On the reverse side you will find a cardboard insert with a callout of features and a specification table.
Opening the packaging is achieved very simply with three protruding ovals with a plastic cap that snap off. In addition to the NC, you'll find the USB power cable, a small user's insert, and a baggie containing an Arctic Cooling sticker badge and the anti-slip feet. 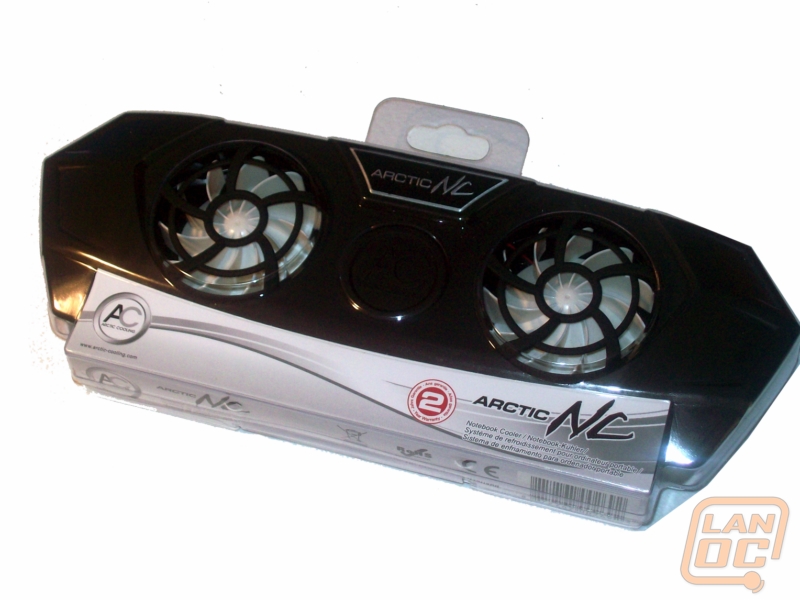 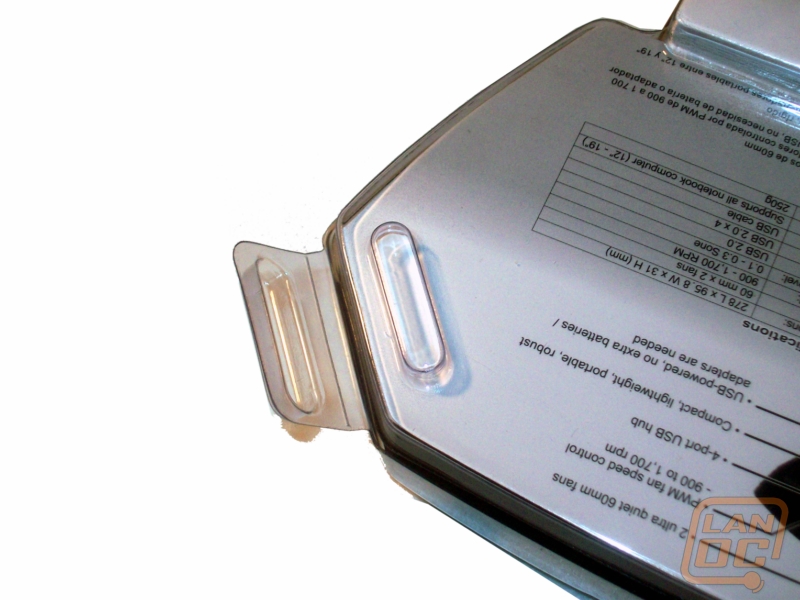 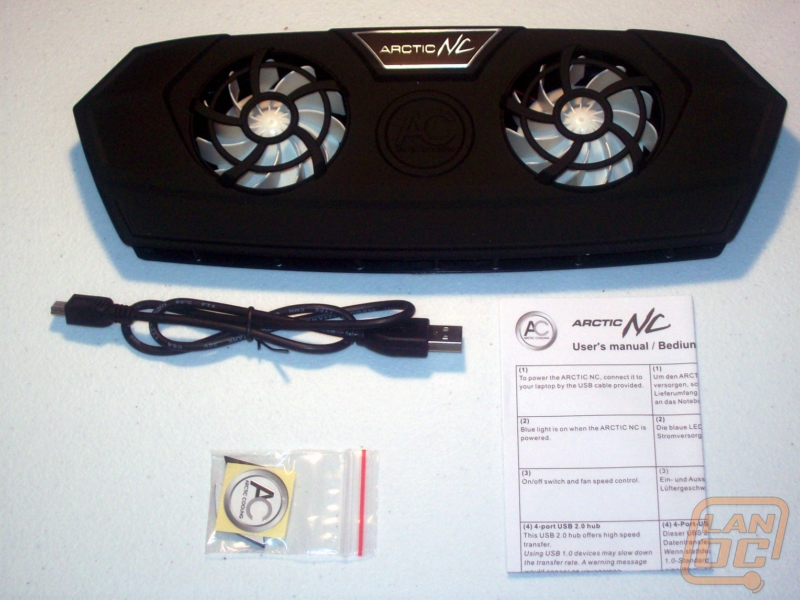 Set-Up
As hinted at above, the Arctic NC does not come with the anti-slip feet installed. It is a small task, but an unsual one, since the only reason I can imagine for doing so would be to adjust for different laptop widths. However, the cooler is design for models between 12" and 17", with even my netbook a bit wider than the NC, there shouldn't be any circumstance where you wouldn't position the feet completely to the edges. 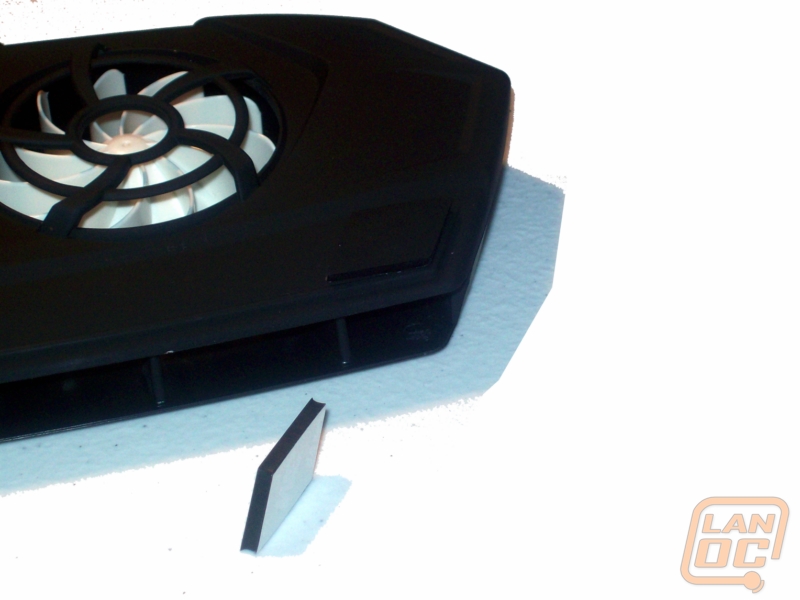 The remaining set-up involves connecting the USB cable from the back-center of the NC to an available port on your laptop, the included cord just enough to reach when using widescreen models.

Performance
The Arctic NC is made from light material, and compact enough to toss in a laptop bag and not notice much of a difference. The face of the cooler is made from what feels like a soft rubber, and the white fan blades against the black base is an attractive look. The NC does feature an LED indicator when on, which is a bright blue bulb that will shine from the rear of the product. So if you're taking it to a LAN, make sure to seat yourself across from your nemesis. 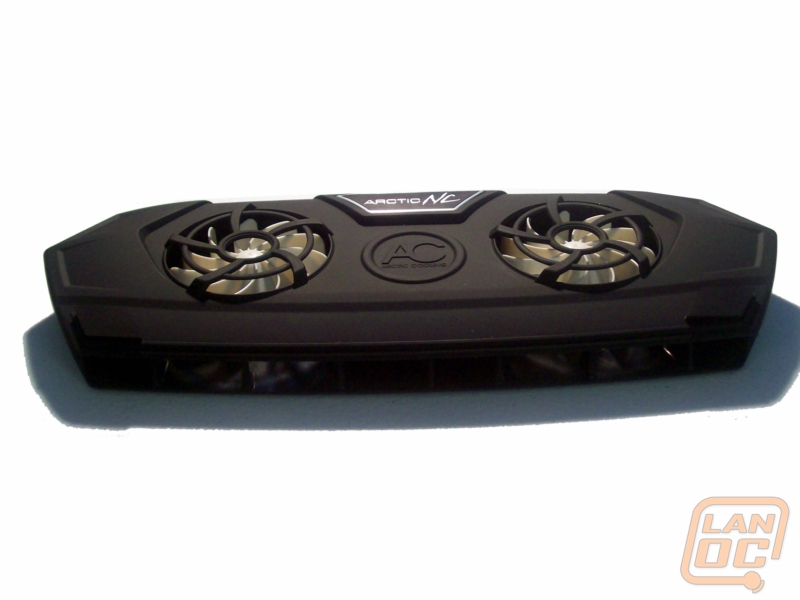 Arctic Cooling has designed the NC with an airflow system that I prefer, in which the fans are on the exhaust instead of directly underneath the bottom of the laptop. Instead of trying to cool the components through the plastic base, the NC achieves a cooler environment under the laptop by proping the notebook at an angle (which is also more ergonomic for the user), and flushing the empty space between the system and the surface with cool air. 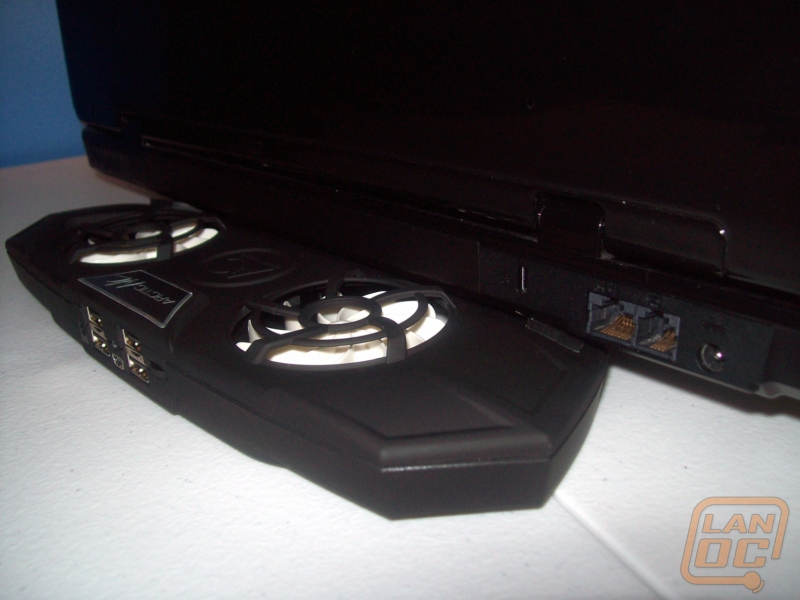 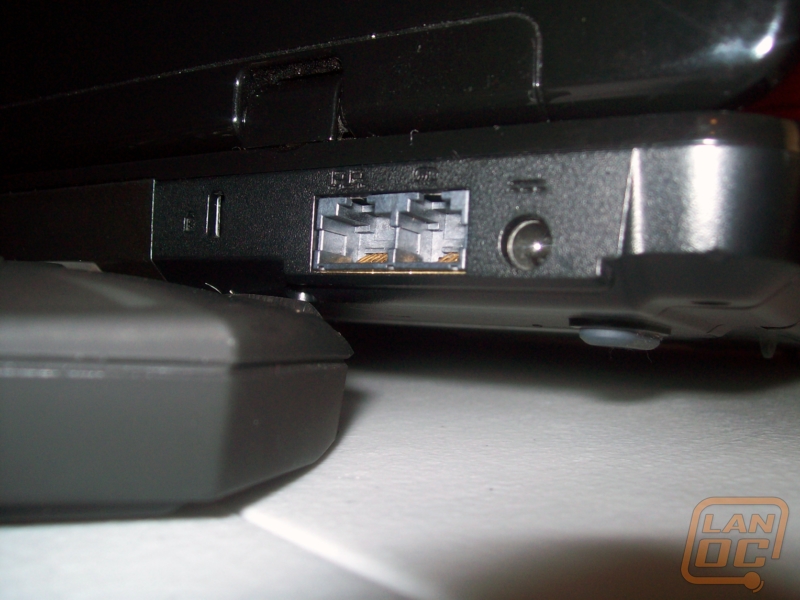 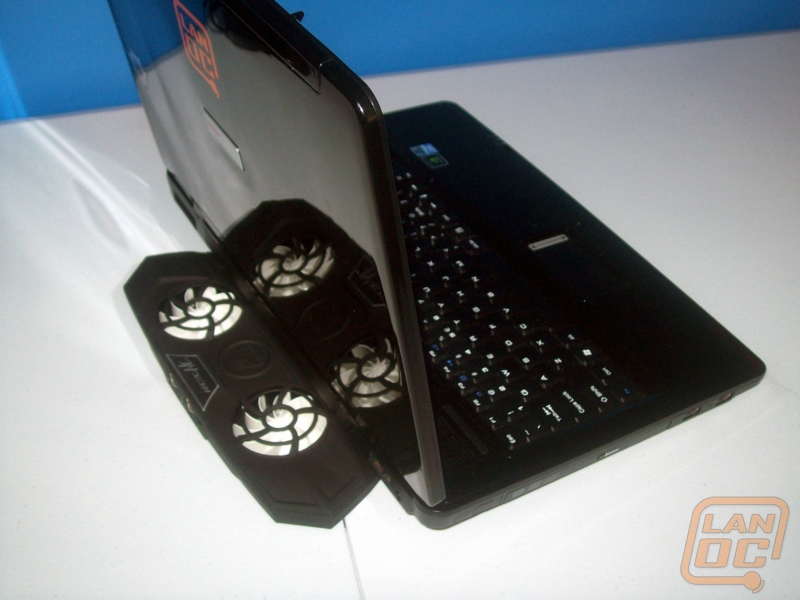 I would like to think that reader's are familiar with the rig in which I test laptop products on, but just in case, here is a quick overview. The laptop is a widescreen boutique build from iBuyPower. It is equipped with a. nVidia GeForce 8600M GT, a graphics card which is notorious for overheating. Therefore when we stress this system, getting hot is an understatement. In addition, the system also features an Intel Core Duo 2 at 2.5GHz, 4GB DDR2, 298GB HDD, and Windows 7.

Our testing stressors are Prime95 and Rthdribl, measuring with Realtemp 2.5. Testing is conducted in a maintained environment of 69 degrees Farenheit for 30 minutes. 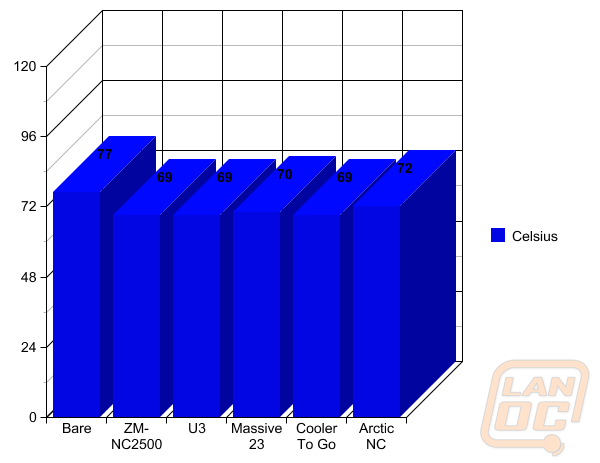 The Arctic NC finished a few degrees above competitors, but still managed to reduce temperatures from bare tabletop use by a respectable five degrees. The interesting comparison is between the Arctic NC and the Antec Cooler To Go, which also uses the same cooling method as the NC. Though the Cooler To Go does trump the NC by three degrees, Arctic Cooling's solution is ten to fifteen dollars cheaper, and does it in a manner which is much quieter. Also, the Arctic NC has a built-in 4 USB hub on the back, which makes this package all the more valuable. 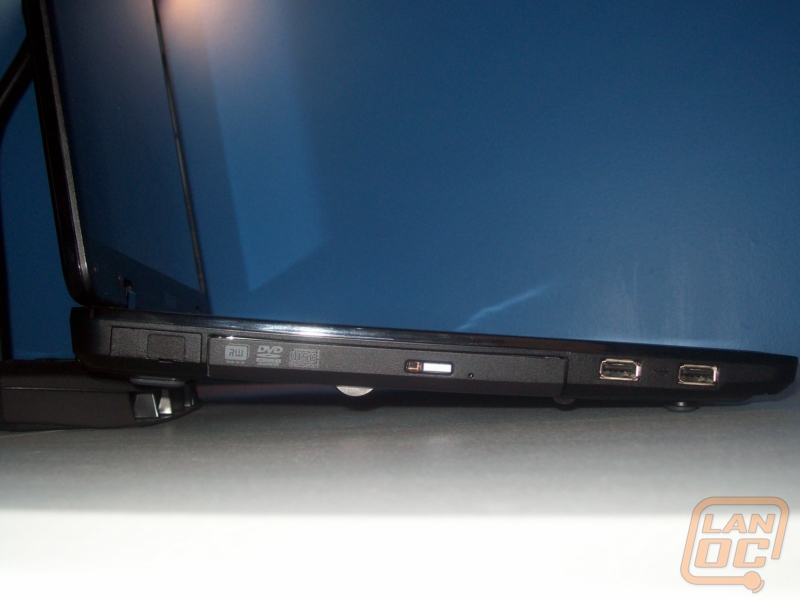 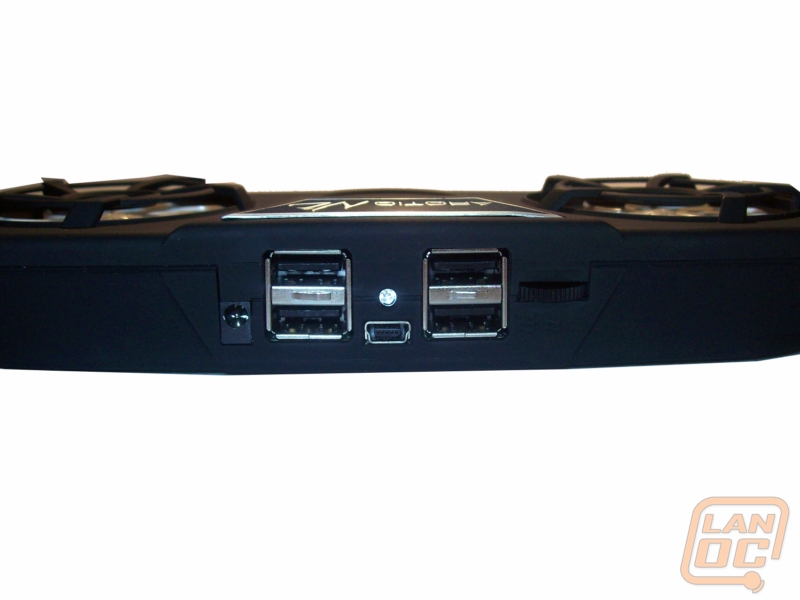 Overall
Though it's not top dog in temperature reduction, a difference of five degrees from bare use is nothing to dismiss. The Arctic NC more than makes up for it however with extremely friendly use, from portability to silent performance, even at its full 1700RPM setting. The NC is also one of the most affordable notebook coolers you'll find with an active cooling system, especially one that expands one USB port to four. 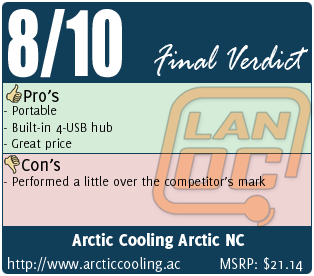 Author: Lersar
Contributing Editor / Event Staff
Adam is a big proponent of LAN parties, esports and speed-running, and helps organize our semi-annual LAN events. He has covered hardware and software reviews of a wide variety, but most content these days come from event coverage, such as other LAN parties.
Discuss this article
Log in to comment
Posts in discussion: Arctic Cooling Arctic NC

We have 1033 guests and no members online