With the flood of high-performance gaming mice on the market today, each contending with a myriad of features designed to provide the greatest aid in performance, it's easy to underestimate just about anything else. This reviewer, one who often games on a laptop in a recliner, using the nearest lamp stand as a mouse surface, can appreciate all the factors that create a good experience with a smaller factor wireless mouse. Today I kick back with Choiix's newest entry, the Cruiser, to see how it stacks up.

Packaging
Having worked with Choiix products in the past, the containing package of the Cruiser came as no surprise. The box is the typical orange/white theme, with the entire top side panel made of transparent plastic, allowing a direct view of the actual product within. That front piece is actualy the side of an inner plastic caseing, removed easily by cutting the adhesive tape on the title bar and the blue trace sensor callout that keeps it into the larger craddle. After doing so, the plastic bay simply slides out, revealing the included mouse pad, batteries, receiver, and the Cruiser. 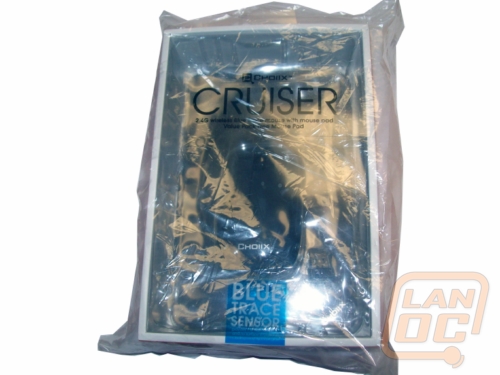 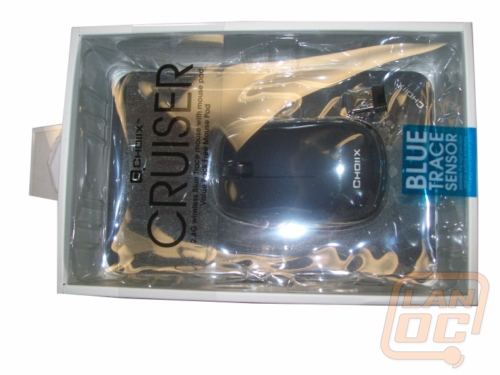 Despite knowing from the listed features that a mousepad was included, it almost got tossed along with the other disposal packaging. The reverse side of the pad, which you'll initially see should you open it from the back as I did, is a metallic silver insert, much like you'd see in microwavable pizzas. In reality, this is the backing of the mousepad. All other components remove from their plastic homes without trouble, and provide for a quick set. 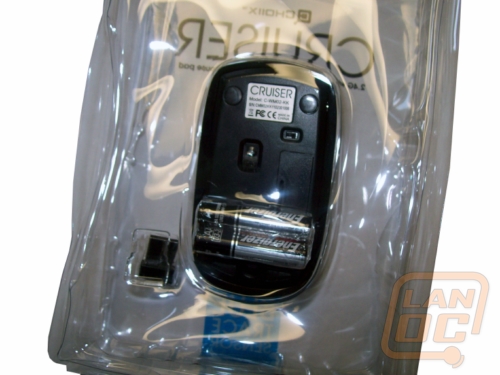 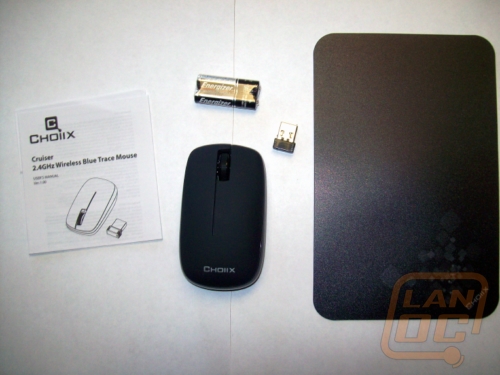 Set-Up
Despite the product being designed for convenience, sometimes you see some lag on the initial put together. Though you obviously will only need to insert batteries when they need replaced, installing them is actually quite easy in itself. Choiix has included a pull tab for the batteries, thankfully, since they lie vertically on top of one another. Having been the frustrated owner of more than a few remote devices that take a rediculous amount of effort to remove and replace batteries, this little perk wasn't lost on me. The tab also shows which way the batteries are supposed to face, saving you the trouble of peering in the dark well to find our on your own. 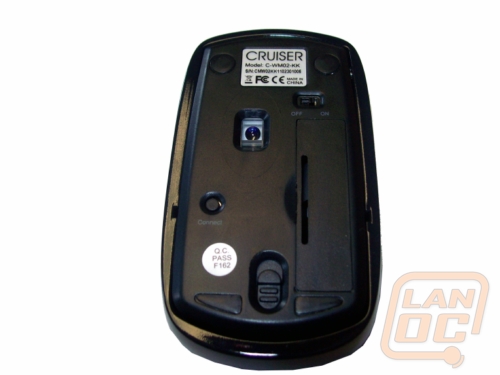 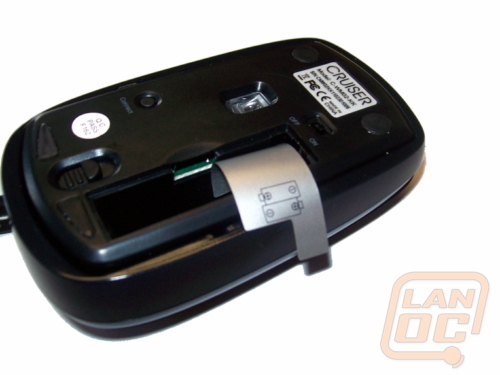 The receiver comes packed outside the unit from production, so inserting it straight into a USB port is no problem. However, to save you from losing it should you need to remove it from a computer, there is a bay built cleverly into the mouse itself, which will be discussed later.

Once the receiver is in, simply switch the power on the bottom of the Cruiser to the 'on' position. Even on the first connect, the mouse synced on it's own, though if you have any trouble a connect button is located on the bottom as well. There are also no drivers to install, which is great, since plug-and-play is a major plus for this type of hardware.

Another unique feature of the Cruise is the ability to heighten the mouse to an incline position. This creates a more ergonomical situation, and also reveals the compartment for the USB receiver. Another switch on the side of the newly exposed bottom releases the housed receiver. 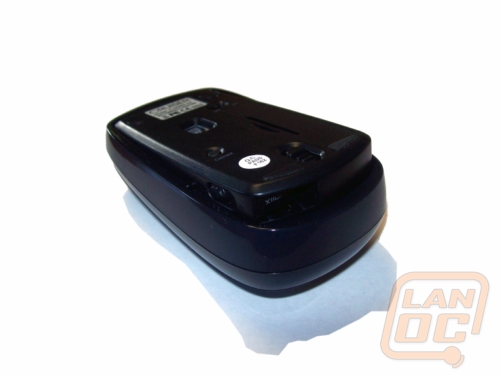 Performance
The adjustable position is a nice addition, since the flat setting makes the Cruiser even more portable, while the heightened setting increases functionality. As mentioned before, there is a small holster for the USB receiver in the extened plastic that is revealed when you have it heightened, which is achieved by simply pulling back a switch near the back of the mouse on the bottom. This releases the position, and can be compacted by pressing down on the top of the mouse until it locks in. 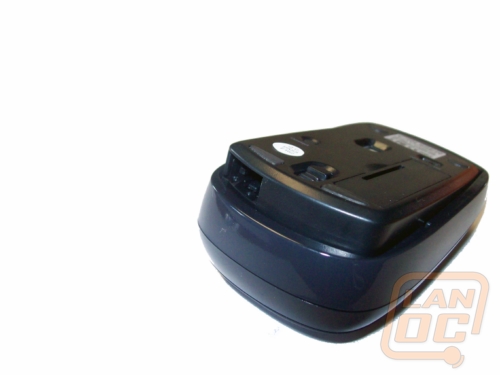 There is no sort of catch that keeps the mouse in the higher extended position, so while the mechanism keeps it up against gravity and minor pressure, you may find yourself putting too much weight on the Cruiser while holding it and accidently pressing it back down into compact. This is especially likely to happen the first few times you use it, until you've become accustomed to it.

Depending on your situation, this could hurt you or really make no difference at all. For casual use, such as navigating websites, there really is no inconvenience here; in fact, Choiix has designed the Cruiser to appeal to a grasp position that puts the grip and pressure towards the front of the mouse. However, if you're planning on gaming with it and have a grasp style that favors the rear of the mouse, you may hit some issues.

The idea of using it for gaming may seem odd and perhaps blasphemous to some, but in reality it's a viable option. The size and stature may be too small to remain comfortable for the extended game periods that gamers encounter, largely depending on hand size, but with a 1600 DPI, the ability is definitely there. And again, please note that comfortability issues are likely to arise only in the increased pressure situation of gaming; using the mouse for a few hours to surf and do a little photo editing presented no problems in comfortability whatsoever.

The DPI did, however, seem initially high even for a gamer such as myself for normal casual use. This is easily rememdied by a quick Windows Mouse alteration of the scroll speed. I also found myself increasing the double-click speed, since the switches under the left-, right-, and even scroll-click seemed to take more effort to depress than other mice. I also ran into a lag issue in response for the first few seconds after the mouse is first turned on, and brought back to activity from the automatic sleep mode that Choiix has included.

Another unique feature you're likely to notice earlier is the blue tracing, as opposed to the typical red. This technology is designed to help functionality on an extended amount of surface materials. Though a nice mouse pad is included, Choiix by no means expects you to take it with you everywhere. As mentioned, I often play on a wooden lamp stand, which has been known to give tracers some trouble due to the porous nature of the materials. The Cruiser had no problem tracking on it, nor the fabric of my pants, the chair arm, and even the carpet itself. 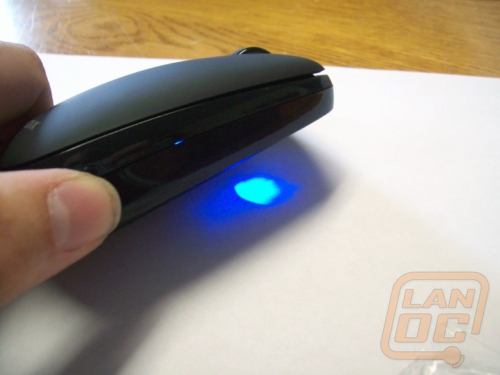 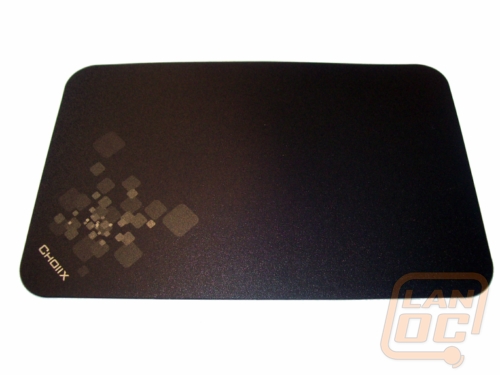 Overall
The Cruiser mouse is likely to set a new standard for portable mice. With a tracking system that works on a large variety of surfaces, support for high DPI settings, and a more ergonomically friendly design that compacts for even more portability, Choiix has ushered in several new features that leave other models in the past. There's a lot more to portability than just being portable, and the compatibility and convenience of the Cruiser are great examples. 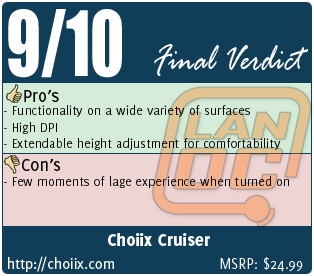 Author: Lersar
Contributing Editor / Event Staff
Adam is a big proponent of LAN parties, esports and speed-running, and helps organize our semi-annual LAN events. He has covered hardware and software reviews of a wide variety, but most content these days come from event coverage, such as other LAN parties.
Discuss this article
Log in to comment
Posts in discussion: Choiix Cruiser