Cooling is essential to any computer and has become even more vital for those users running higher-end laptop models, such as gamers. The nature of the notebook is a hot one, and putting extra hardware and stress in little spaces only adds to the problem. We've reviewed many laptop coolers in the past, each with their own tactic to tackle a common enemy (heat). The weapon of choice has always been fans, ranging in size, quantity, and speed. That is, until now. VIZO has introduced a new, fanless tactic to the arsenal of laptop cooling, and sent us a sample to try for ourselves.

Packaging
VIZO has always done a great job showcasing their products before the maiden opening, and the EZSurf is no exception. This is fairly simple: a rectangular base container with the product situated in the middle, easily accessible once opened. You will notice that there are no screws or mounting hardware included; only a thin strip of adhesive. This is the secret to the EZSurf line, as explained below. There are a few different colors to choose from, including Hyper Black (review sample), Northstar Silver, Light Silver, and Brilliant Black. 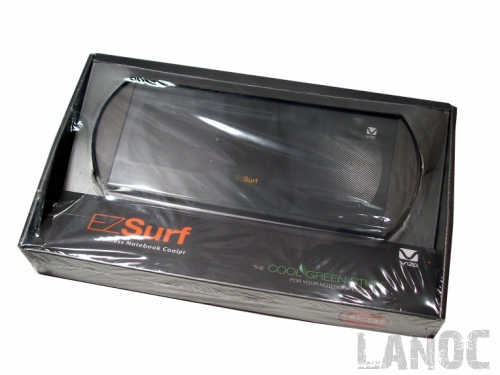 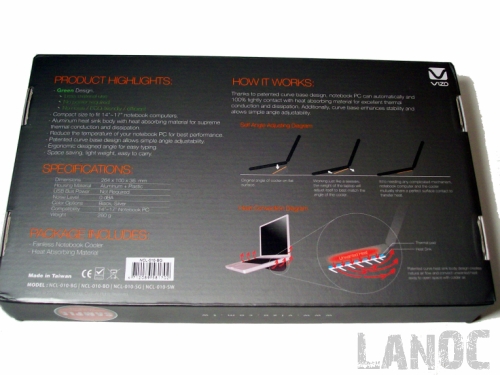 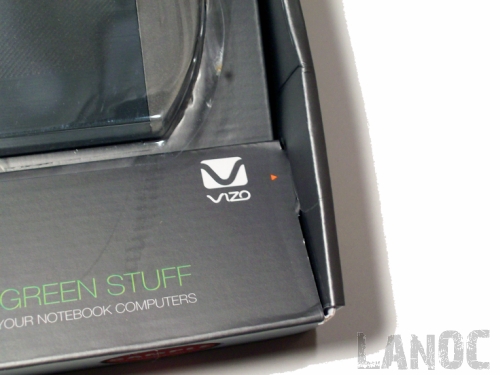 Installation
The thermal adhesive strip not only holds the cooler to the laptop, but it also transfers the heat to the cooler so the heat sink design can better dissipate the heat. The first thing that popped into my mind was whether this was a permanent solution or could be removed easily. With the majority of system tags, such as registration keys and serial numbers, are on the bottom of laptop cases, you wouldn't want to cover them up, or if removable, tear them with it. To my relief, the strip doesn't break apart and bond like my imagination led me to believe; it pulls off as one piece without much trouble. However, it is an adhesive product, and a little quality is lost every time you take it off. 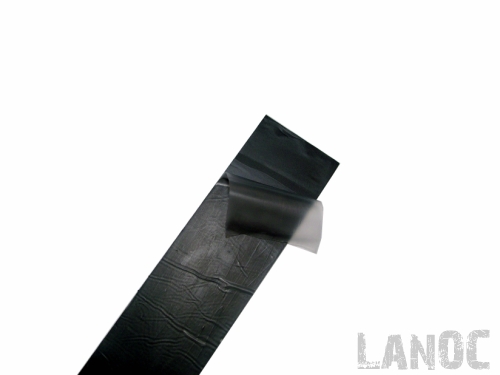 The strip does need to be installed on the cooler. The area for it to be placed on the cooler is easily detailed on its top surface, directly in the middle. Remove one of the plastic film sides on the adhesive strip and apply it to the cooler (three step-by-step instructions can be found on the strip if needed). The absorbing material should be applied straight and without and air bubbles, which is easier said then done, especially when you remove the remaining film. The nature of the adhesive wants to pull up with it, stretching it and allowing air back in. 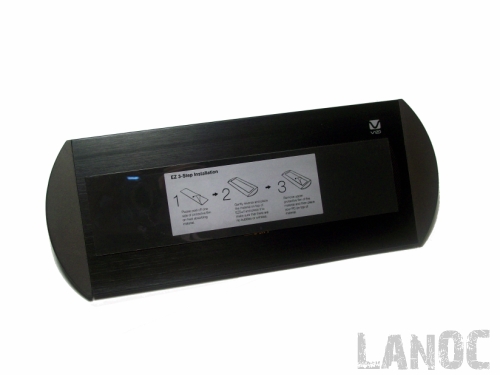 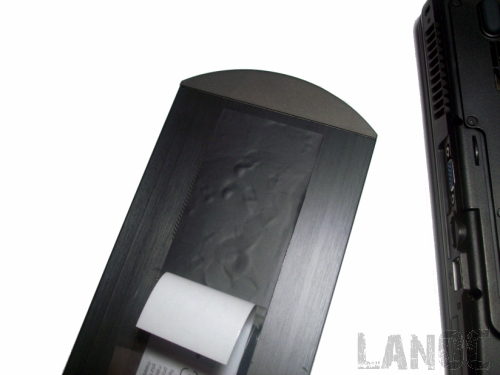 Next, an appropriate area on the laptop bottom needs to be chosen, which can present a few problems, especially with a laptop such as mine. Modern day notebooks include many doors and access points for often removed hardware, such as the hard drive or battery. These bays include switch locks to keep the hardware secure, and often protrude from the surface. Since you want a flat surface, this can severly limit where you can put the cooler. You'll also need to put it far enough back that it holds balance when the screen is lifted for use. While it would be nice to be able to place the EZSurf in custom areas that dissipation is needed more, you may find yourself settling for whichever location works. 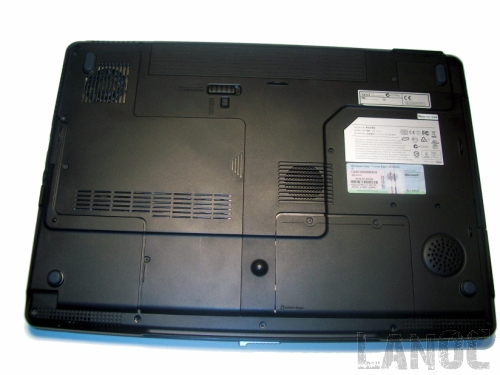 In my situation, the battery is placed in the back and is ridged, running along the better portion of it's width. So the nearest to the back I could place it (in fear of tilting) was in front of the battery bay, which unfortunately wasn't enough. As soon as I would open the screen for use, the laptop for tumble backwards. In order to test the cooler then, I had to lean the screen against a wall. This, of course, is an individual result based on my laptop, but it is something to keep an eye out for. 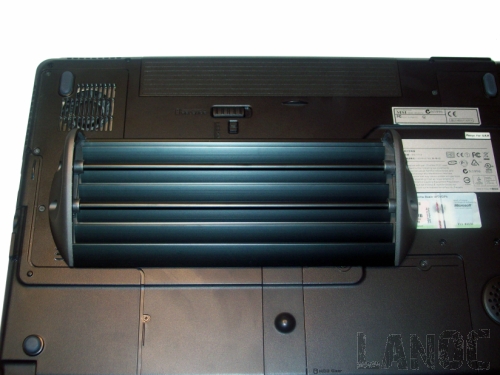 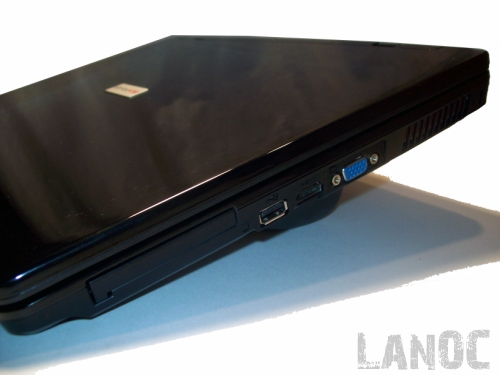 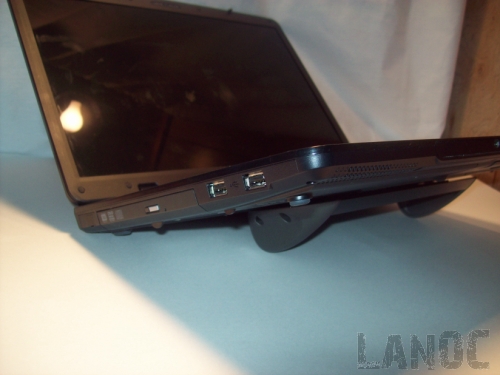 Performance
Luckily, the area the EZSurf ended up in was right underneath my video card, a prime area for overheating, so I was anxious to see the results. As mentiond, the adhesive bond that holds the cooler to the laptop also acts as a thermal compound that transfers heat into a heatsink design, allowing airflow to then further cool off the aluminum. This means there are no fans, no power cord, and no noise, a definite plus.

Because of it's size and lack of a power supply, the EZSurf is extremely easy to travel with. However, unless you plan on leaving the cooler attached at all times, you'll need to treat the adhesive strip with care to keep it effective.

Test
To test the effectiveness of the EZSurf, I stressed my system to a load of 90~100% running Rthdribl, Prime95, and Crysis Wars while monitoring using RealTemp. The programs ran for an hour simultaneously, once without the EZSurf and again with it, with 24 hours of power-off between each test. 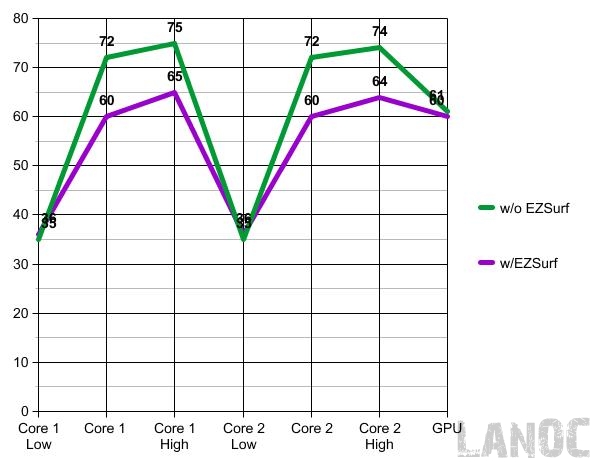 So as you can see, there was some significant cooling to both the processing cores, up to a 12 point difference. However, the GPU only saw one point of improvement. Running Cyrsis Wars with two other stress programs, we won't hold that against it too much.

Overall
The idea of the EZSurf is excellent and effective, but the application needs some work. With a compatibility listed of 14"~17" and dimensions of 10x3x1.4", some of the transportation quality may need to be sacrificed to ensure compatibility of all larger-size laptops. The heat dissipation designs works great, though the adhesive material can be difficult to handle at times. When placed and balanced correctly with the laptop, the EZSurf is a nice alternative to loud fans and power cords. 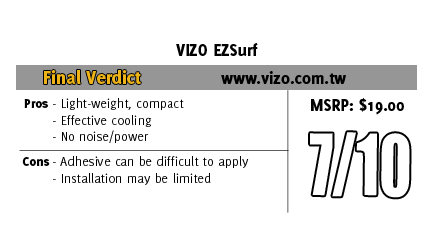 Author: Lersar
Contributing Editor / Event Staff
Adam is a big proponent of LAN parties, esports and speed-running, and helps organize our semi-annual LAN events. He has covered hardware and software reviews of a wide variety, but most content these days come from event coverage, such as other LAN parties.
Discuss this article
Log in to comment
Posts in discussion: VIZO EZSurf

We have 1628 guests and one member online