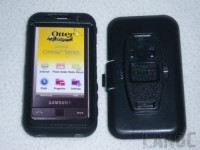 Cell phones have become an integral part of our lifestyle and culture, taking place as almost a necessity in our hierarchy of needs.  Unfortunately these futuristic pieces of tech are typically very fragile and therefore often unfit for more strenuous conditions.  The cell phone phenomenon has persisted for years now however, and solutions to this problem have been developed.  Phone cases aren't exactly a wondrous, technologically ingenious way of protecting your new gadget, but they work.  One manufacturer, Otterbox, has developed a reputation for making quality phone accessories.  New phones are being released every day, and yet Otterbox seems to have a unique case solution for most if not all phones.  They  were kind enough to send us a case for the Samsung Omnia, known as the Defender, to test in everyday use.  Here is how it measured up.

* Layer 2: Hi-impact polycarbonate shell for an added guard against drops and shocks 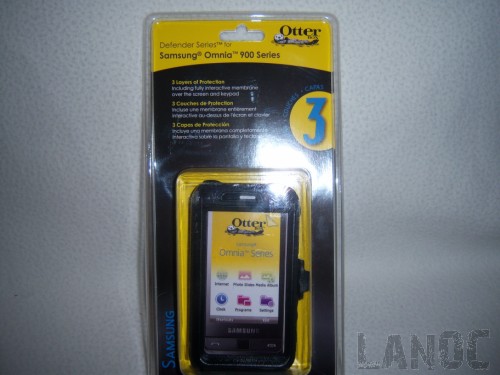 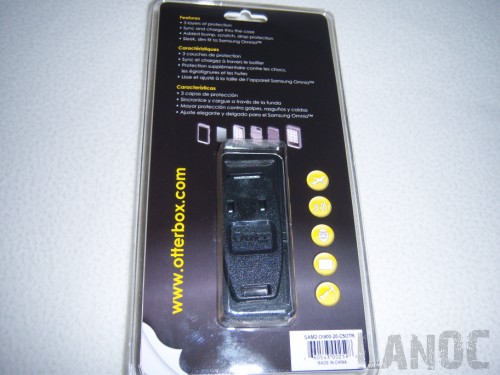 Otterbox packages their cases in easy to open plastic, sealed tight but able to be pulled apart at the right spot.  A minor convenience to not have to reach for something sharp. A black cardboard insert is the background for the text on the package, which is yellow making it clearly visible. The Otterbox logo is printed on the top with a large yellow margin at the top, allowing no one to mistake their product as someone else's. The front of the case allows you to see the whole case, and the back allows you to view the belt clip in its entirety.  Otterbox proudly displays their "3 layers of protection" specs as well as other specs around the case itself. A minor novelty is the insert in the case itself, printed to look like the menu of an Omnia.  This gives you an idea of what your phone will look like inside the case. 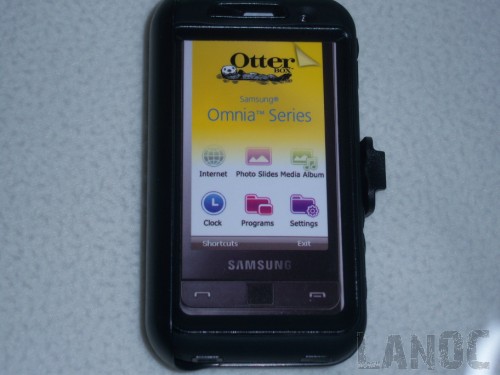 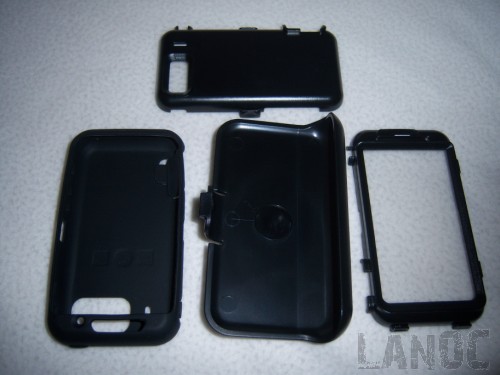 I was a bit dubious upon removing the Defender from its case that none of my phones features would be obstructed as per the specs.  The case itself is a two part snap together plastic shell covered by a layer of rubber.  You take off the rubber cover first in order to get at the plastic shell, and then snap the plastic into two pieces in order to slip in the phone.  Obviously the touchscreen goes in the side with a transparent covering that allows you to continue to use its touch features.  The back has an appropriate hole for the camera so it's nigh impossible to unintentionally screw up putting your phone in the shell.  After you snap the two pieces back together, you will notice that the shell has plastic tabs that stick out all along the outer edge of the case.  These are what keeps the rubber layer in its exact place at all times.  The rubber covering has holes that go around the plastic tabs thereby securing it fast.  In addition, the two tabs on the middle of each side serve to be the lock-in mechanism for the belt clip.  Pretty simple for as much protection this case provides. 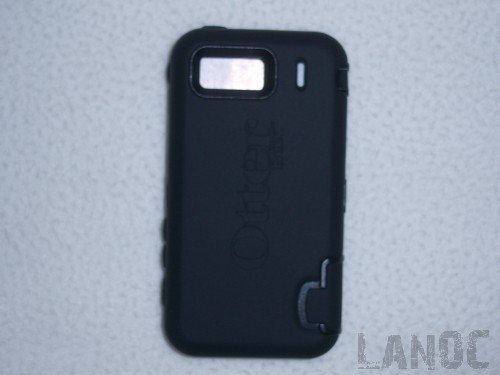 I can gladly say that my previous fears over the case were unfounded.  Otterbox truly did design the defender so that no features would be negatively affected.  The camera's porthole allows for full functionality without any visible borders due to the case.  All buttons work exactly as they did previously, despite being covered by rubber.  They merely require a little more force to properly register.  Call quality is unaffected as there is an open hole from the outside of the case straight through to the mic.  In fact, this case even fixes one major gripe I had with the Omnia: lack of proper ear space.  You see, without the case, the place you put your ear on the Omnia while making or taking a call is merely on the flat touchscreen itself, which is awkward, hot, and can become painful. 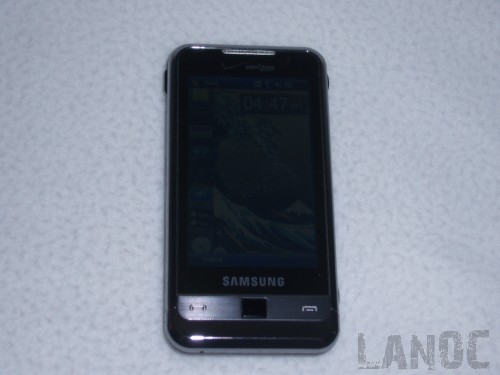 The Defender rectifies this by making a designated ear port that is raised up off the touchscreen, making calls much more comfortable and in some cases, more audible.  The touchscreen itself works remarkably well for being covered but it does suffer a very minor sensitivity decrease.  To give you an idea on a scale of one to ten, this decrease is only 1 point.  The only feature that is completely covered by the case is the battery compartment and therefore, the memory card port.  This is somewhat of a moot point, however, since people don't swap these two things out all that often.  Now that the standard features are out of the way, it's time to move on to the durability.  In short, once you put this case on your phone it becomes a very tiny tank.  The rubber covering absorbs the shock of most impacts.  Any thing that makes it through that has to cope with the the very capable plastic shell.  Beyond that if anything damages the phone, you probably threw it, and therefore deserve the resultant consequences.  Unfortunately, this case does have one oversight that does diminish its consumer base in my opinion.  If you like to wear your phone on your belt, there are no cons to this case.  However, if you have no intention of utilizing the belt clip you should be aware that the case by itself does not interact well with pockets.  The rubber covering provides two problems.  It is exponentially more difficult to remove your phone from your pockets due to the friction.  This is becomes somewhat of a nuisance, especially if you are one of those people who scrambles for their phone when their ringer goes off.  The second is that rubber has an interesting ability to attract as much dust, dirt, and grime as possible.  Unbeknown to many people, a lot of dust and dirt reside in our pockets, and if you are slightly obsessive over keeping your phone clean this case will give you nightmares. 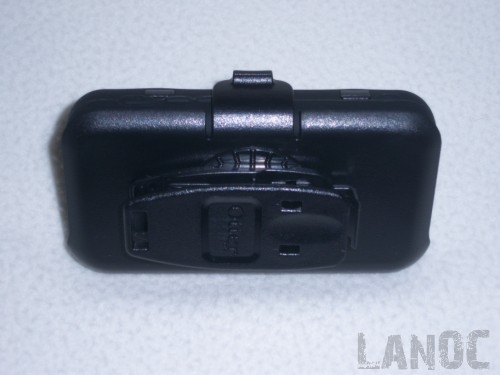 In principle, this case is a perfect accessory for any Omnia owner.  It does everything it claims to do, and provides some little added bonuses as well.  However, depending on the kind of person you are, this product may fall short of your expectations.  If you don't like to wear your phone on a belt clip, then the Defender may not be your bag.  That is not to say that there isn't a perfect demographic for this phone case.  If you like wearing your phone on your belt, or have professional reason to do so, such as in construction or business occupations then this is without a doubt the perfect phone case for a Samsung Omnia.  The durability and persistence of all of your phones features makes this the case to own.  The price tag is a bit hefty at $49.95, but for something to work exactly the way you need it to, this a pittance. 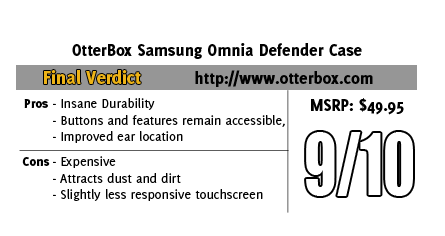 You might call him obsessed or just a hardcore geek. Wes's obsession with gaming hardware and gadgets isn't anything new, he could be found taking things apart even as a child. When not poking around in PC's he can be found playing League of Legends, Awesomenauts, or Civilization 5 or watching a wide variety of TV shows and Movies. A car guy at heart, the same things that draw him into tweaking cars apply when building good looking fast computers. If you are interested in writing for Wes here at LanOC you can reach out to him directly using our contact form.
Discuss this article
Log in to comment
Posts in discussion: OtterBox Samsung Omnia Defender Case

We have 1474 guests and one member online