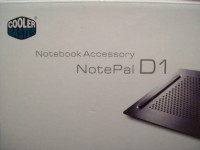 A while back, Cooler Master sent us the Notepal Infinite, a notebook cooling solution to cover wider-screened models, sporting a self-claimed 17 degree difference. Recently, we received the new Notepal D1, a turn around of its sister product, per say. Designed specifically for increased mobility, the D1 is only about half as long as any laptop and wide enough to fit a standard size model. Sure, smaller is always better when it comes to those of constantly on the go, but how does it actually stack up against other notebook coolers, specifically the elder Infinite?

The D1's box is only large enough to fit the cooler and maybe an inch of foam. This box can be tossed, shaken, and spun and the only thing that moves is the two included packets of silica gel. Inside couldn't be more to the point; the cooler and the mentioned styrofoam. There's not even a cord rumbling around in here, but we'll get to that in a moment. The front of the box reads "Portable Design for Convenient Usage", and Cooler Master has at least acheived that this early in the game; the simplicitic design of the box makes it great to hold on to for transportation to and fro. The appearance of the box is fairly simple as well: it has a nice image of the cooler and a list of features, including photos, on the back. 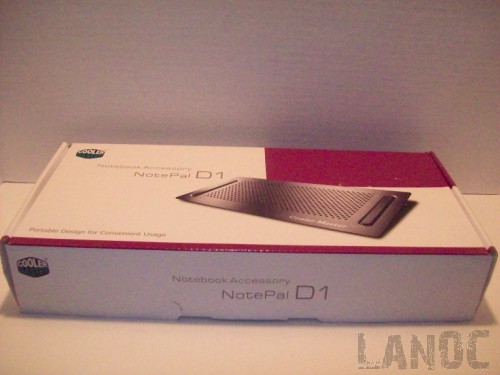 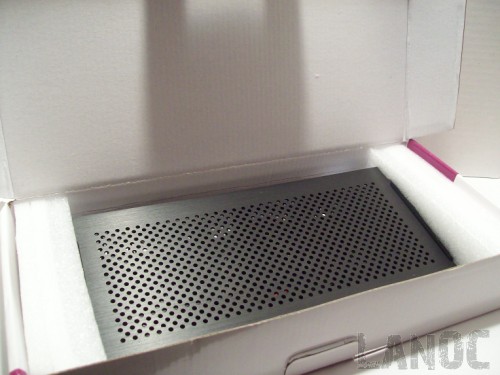 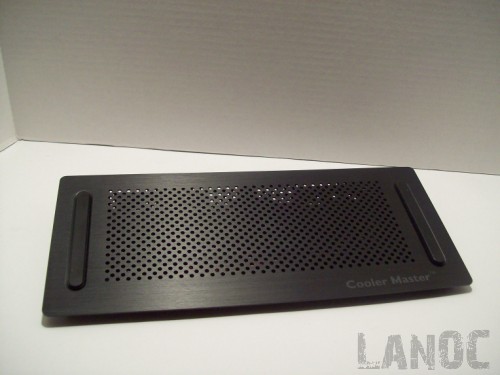 Cooler Master's D1 measures 300 x 130 x 32 mm, or 11.81 x 5.11 x 1.2 in, and weighs only 0.44kg, or 0.97lbs (not even one pound). Its made mostly of aluminum, with some plastic and two rubber strips on the left and right to hold the laptop in place. The D1 has two 70 x 70 x 10 mm (2.75 x 2.75 x 0.39 in) fans with a speed of 2000RPM, with an airflow of 25.16CFM. The Cooler Master Infinite has a fan dimension of 90 x 90 x 25 mm, and at it's highest setting maxes at 2000RPM as well. Remember the missing USB cable? Its actually completely stored on the bottom of the cooler! The Infinite featured something similiar to this, but only a small 'L' in the corner for the cable to run from the back to the latptop. Cooler Master has improved on this with the D1, with a thin chasim running the along the shape of the cooler, storing the USB cord in its entirety. And you may recall from the Infinite review that one of the concerns was the plastic tabs that hold the cable in place. They were flimsy, and often gave when trying to secure the cord into the cove. Cooler Master has fixed this as well: the cord can be placed and removed on the D1 several times with extreme ease. The D1 even includes an additional cove running to the back of the cooler, allowing an exit for the cord when it's in use. The USB cord itself has been improved as well: there is now an extension port that allows you retain the number of open USB ports in the same location. Previous models occupied an open USB port and reconciled with an additional port on the back of the cooler itself. While it's more a matter of preference, it is nice to be able to plug a device in where the company intended. Cooler Master has always done a great job with improving the ergonomics of laptop users, and the D1 is no exception. The back-half of the laptop is elevated a little over and inch for better posture, maximizing on comfortable angles. Lastly, the D1 has a fan noise that ranges from 17 to 21 dBA, less than the average noise of a single 80mm case fan. 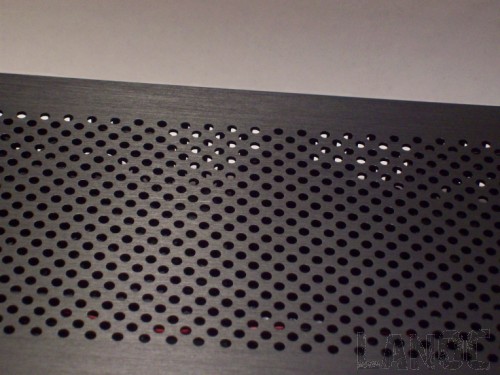 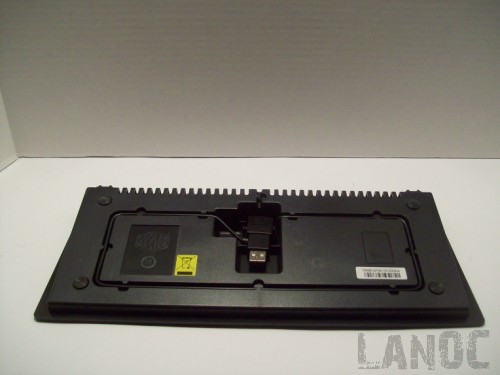 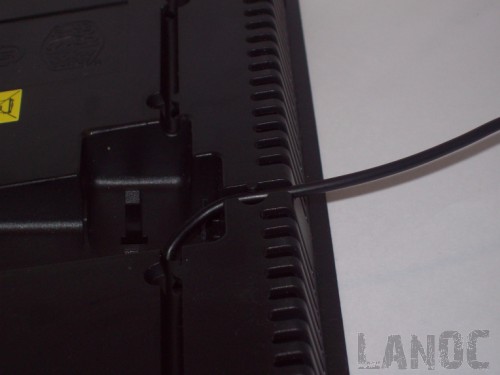 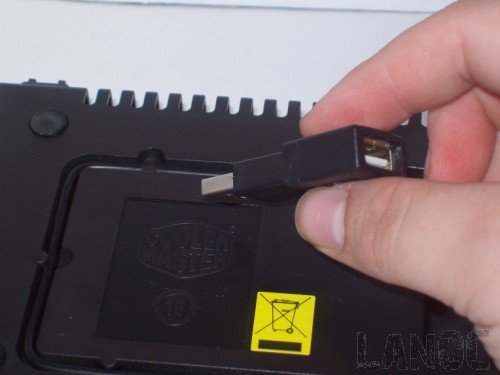 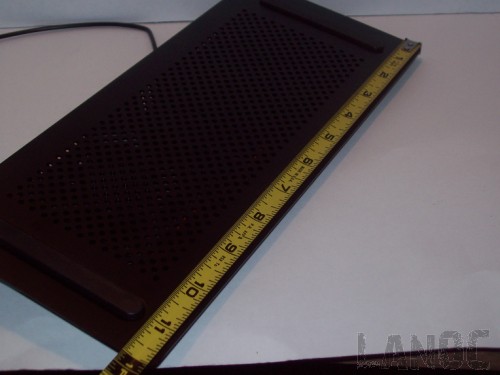 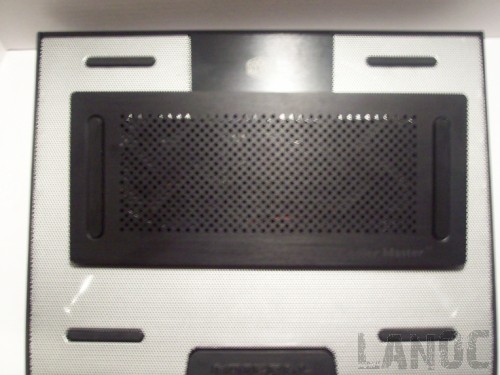 The D1, without a doubt, delivers in the areas of mobility and comfort. The cooler is extremely light, easy to transport, and has a comfortable design. However, the D1 is made specifically for smaller-sized laptops, with Cooler Master maxing the compatibilty at 15in. The compact design of the cooler, however, may allow it to double as a netbook cooler in some cases as well. The USB cable works great, from the storage to the actual use there is no problem what-so-ever.So the test finally comes down to the actual cooling. Using RealTemp, my laptop read at a temperature of 40C and a GPU temperature of 52C. Two tests were ran, one with the D1 and one without, stressing the system to a load of 95% using Rthbribl, Prime95, and running Left 4 Dead: 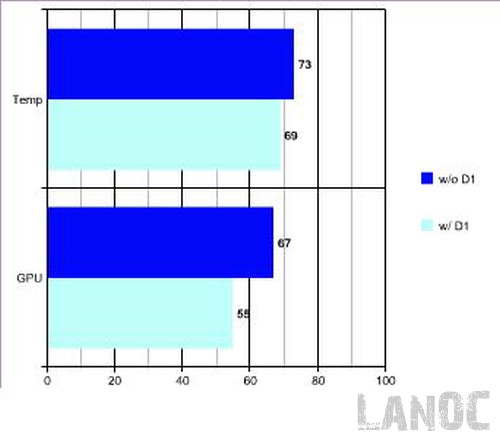 While there was some difference in the temperature (4 degrees), the major difference came from the GPU: a reducement of 14 degrees. Not bad for such a compact cooler.

What Cooler Master is really aiming at here is portability, and has excellently done so. It has become a common goal of any notebook cooler to improve the ergonomics of the user, and the D1 delivers in that aspect as well. But the real idea of a cooler is to, well, cool. With an improvement in general temperature and a 14 degree cooling in the GPU, the D1 does an outstanding job considering its size. It also performs very well against the Notepal Infinite, falling short only 3 degrees of cooling in the graphics realm. Cooler Master has made a lot of little improvements on the D1, such as the USB extension port and cable-lengthed cove that hides the cord when not in use. Considering all the benefits, the D1 is a more than decent cooler alone, and that much more valuable for those users that are constantly on the go. 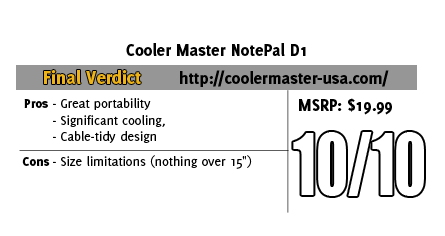 You might call him obsessed or just a hardcore geek. Wes's obsession with gaming hardware and gadgets isn't anything new, he could be found taking things apart even as a child. When not poking around in PC's he can be found playing League of Legends, Awesomenauts, or Civilization 5 or watching a wide variety of TV shows and Movies. A car guy at heart, the same things that draw him into tweaking cars apply when building good looking fast computers. If you are interested in writing for Wes here at LanOC you can reach out to him directly using our contact form.
Discuss this article
Log in to comment
Posts in discussion: Cooler Master Notepal D1

We have 1179 guests and one member online