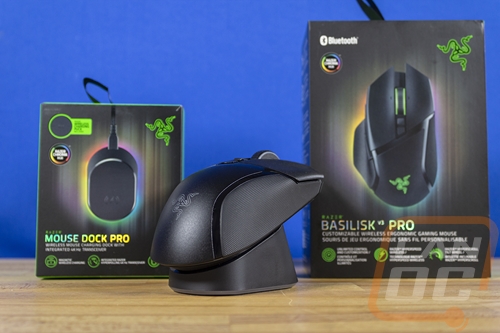 While my time with the Razer Basilisk V3 Pro has been short so far and truth be told it isn’t exactly targeted at me as I would prefer a lighter-weight ambidextrous mouse but the Basilisk V3 Pro so far has been great short of a few issues. Razer used the same Focus Pro sensor that performed well in my testing of the Deathadder V3 Pro and Viper V2 Pro as well as the Gen 3 optical switches that give a nice solid tactile feedback and have a 90 million click lifespan according to Razer. Its wireless performance was great and if needed you also have the soft charging cable as well. I was especially impressed with the lighting, namely the underglows which look amazing even in bright daylight. But the biggest addition for me was the support for the new Mouse Dock Pro which uses wireless Qi charging to keep the Basilisk V3 Pro topped off and a magnet to hold it up on the dock which is a big improvement over the old dock design with pins. Wireless charging was something I wanted to see on the Viper V2 Pro and the Deathadder V3 Pro because I use it daily on the Logitech Superlight. It doesn’t hurt that the new dock also gives the Basilisk V3 Pro support for Hyperpolling as well which is a 4000 Hz polling rate.

The High refresh rate did bring its own issues like weird issues with Windows’s window snapping and it puts a huge load on your battery life. The Basilisk V3 Pro is advertised with 90 hours of battery life when using the included dongle which is without lighting being turned on and with Hyperpolling you can expect that to be around or under 24 hours and then add in the power used by lighting on top of that. A constant charging mouse pad with Hyperpolling may be the better option, but even with the lighting at 100% and 4000 Hz, you should still be able to get a full day's use as long as you are getting it on the charger overnight.

I would love to see the Basilisk V3 Pro be slightly lighter weight but that is just my preference. It is in line with the G502 wireless which is its direct competition and some mainstream users prefer more weight rather than less. Beyond that, the only other complaint I had was with the DPI changing issue which I don’t know if is a software bug, a hardware defect with our mouse, or an issue with the Mouse Dock Pro.

Beyond that, the Basilisk V3 Pro has an MSRP of $159 which is a little higher than the new Viper and new Deathadder, and even with both of them, I considered their $149 pricetag to be expensive so its no surprise that I have that in the cons again. With the Basilisk V3 Pro however it’s not just the price of the mouse, I feel that you get the best experience with it paired up with the Mouse Dock Pro which will cost you another $69.99 or Razer is doing a combo for $199.99 which is a better deal at least but only from their store. Overall I am digging the Basilisk V3 Pro and if you are a fan of the Logitech G502 you are going to like this. 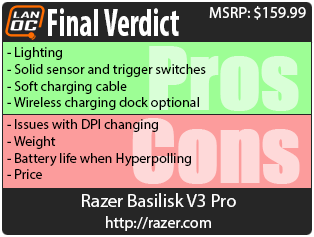 You might call him obsessed or just a hardcore geek. Wes's obsession with gaming hardware and gadgets isn't anything new, he could be found taking things apart even as a child. When not poking around in PC's he can be found playing League of Legends, Awesomenauts, or Civilization 5 or watching a wide variety of TV shows and Movies. A car guy at heart, the same things that draw him into tweaking cars apply when building good looking fast computers. If you are interested in writing for Wes here at LanOC you can reach out to him directly using our contact form.
Discuss this article
Log in to comment
Posts in discussion: Razer Basilisk V3 Pro