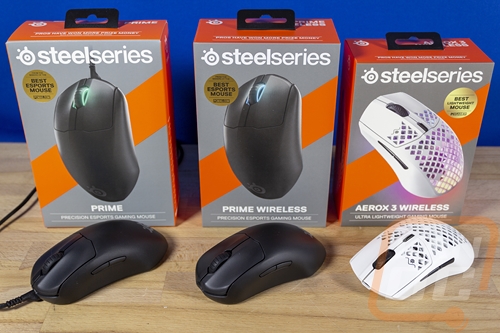 First up I wanted to check out the Prime which isn’t to be confused with the Prime+ or the Prime Wireless. The Prime mouse was introduced mid 2021 as a new lineup with a focus on performance and nothing else. The packaging for the Prime didn’t change from what SteelSeries has been doing for a while now. The box has a large picture of the mouse across the front which I love and then for the background it sits on a grey with an orange stripe. All of the branding is done in white with the SteelSeries name up top in the biggest font then Prime down below with a short description that calls this a “precision esports gaming mouse”. Around on the back of the box, they have another large mouse photo, but this time of the bottom of the mouse. Below that they mention crispy clicks, onboard settings, and the 69-gram weight. In a tiny font, they also mention that this has been co-developed with pro players and that is repeated over and over in other languages. The side of the box is trimmed out in bright orange and has a full specification listing except for the mouse dimensions. 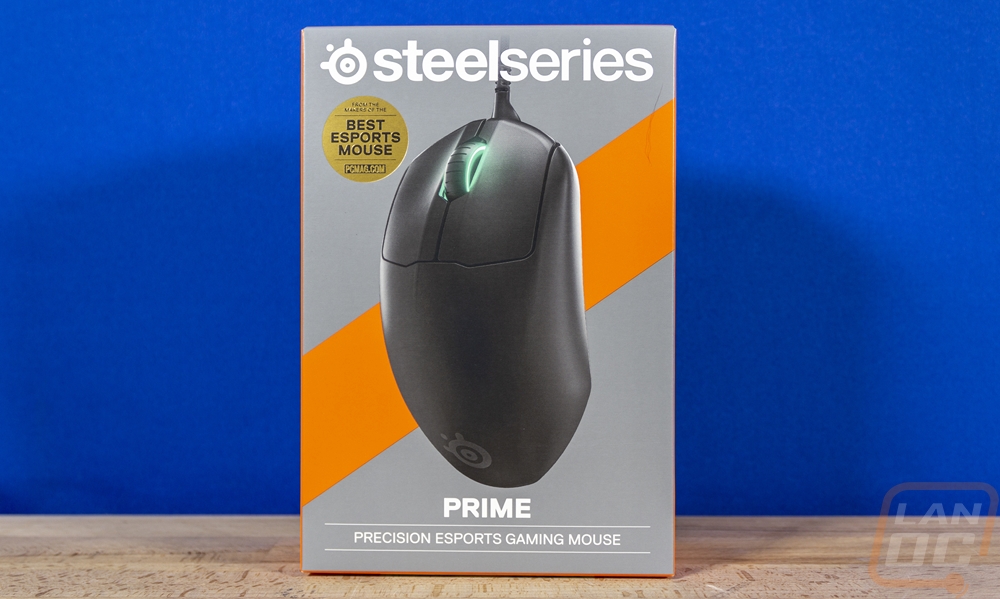 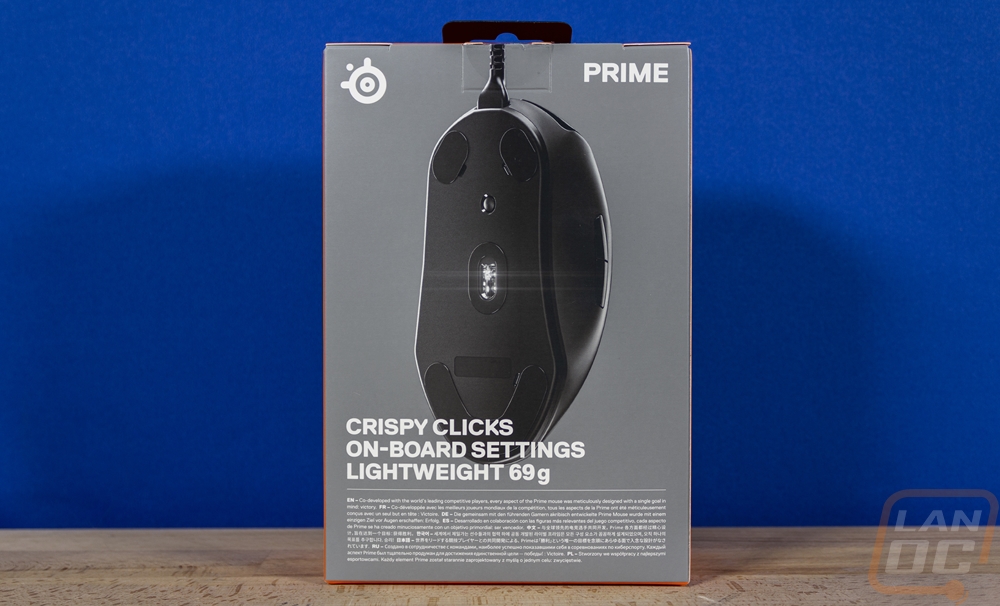 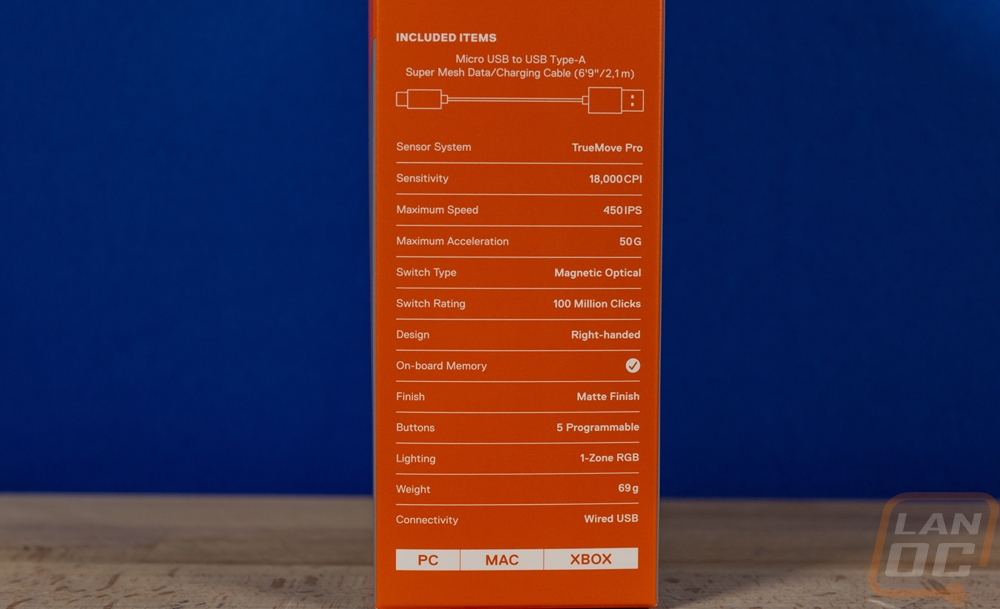 Once you open the box up there is a second inner box which is also decked out in that bright orange and on top they have “for glory”. This opens up to a plastic tray with the mouse in it and a small foam pad on the top side of the box that helps keep it from moving around. The plastic tray comes out and the cord for the Prime is wrapped around the bottom. Below that it also has a small information guide to the mouse as well for documentation. 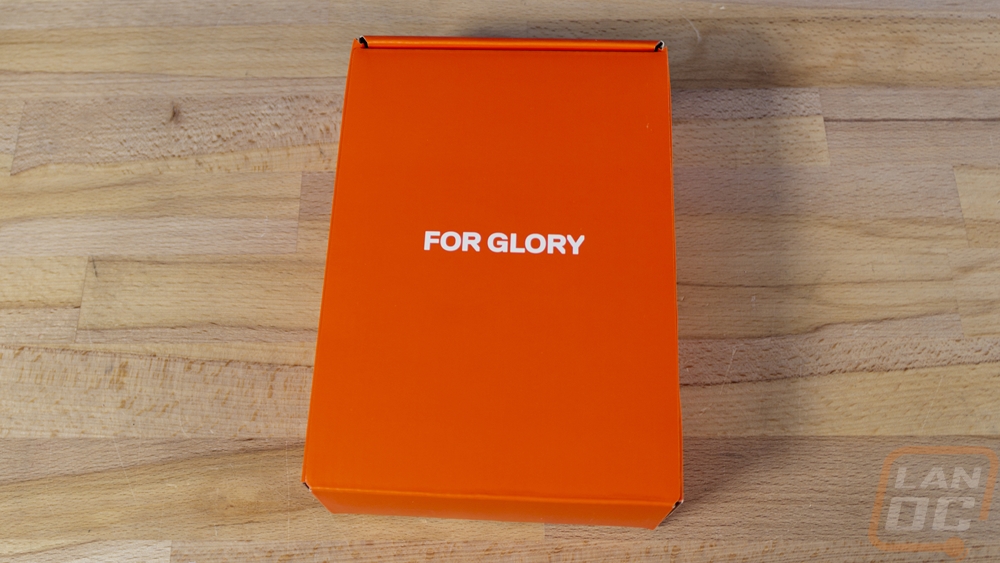 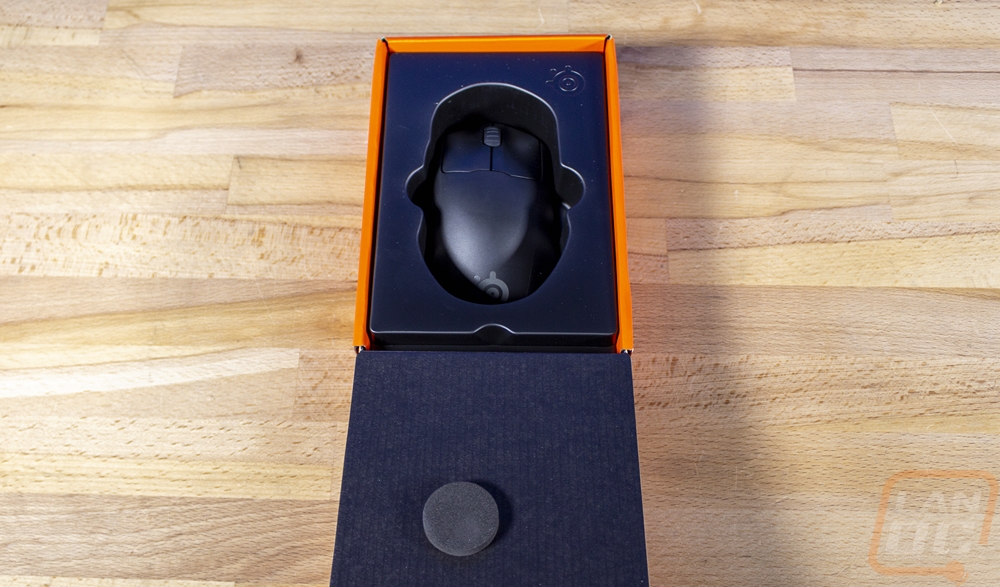 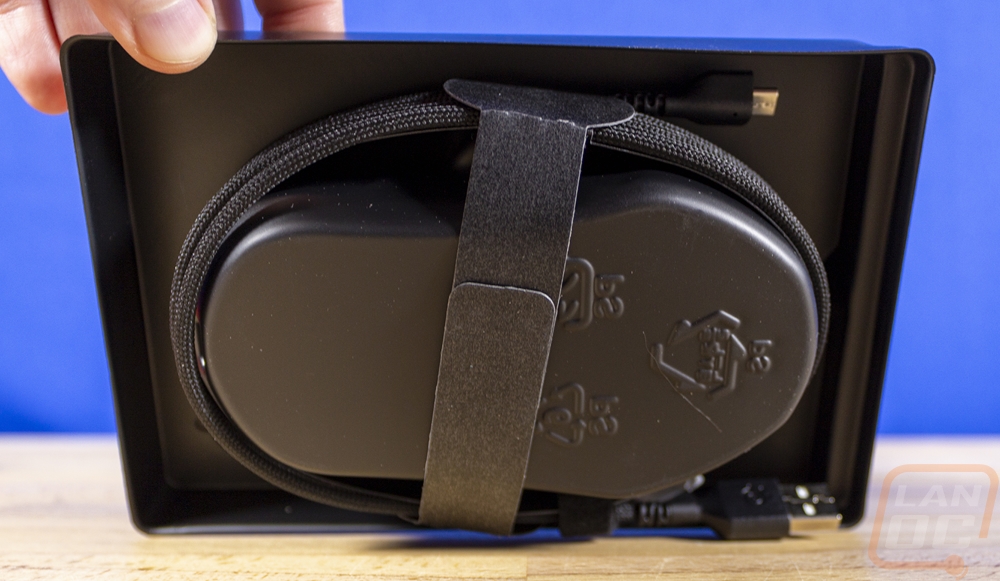 The Prime comes in at a length of 125.3 mm and is 59 mm wide at the front and wider at 67.9mm at the rear. For height, it is 42.4 mm at the back and 23 mm at the front. Lengthwise that is almost the exact same size as the Sensei. But it is skinnier for width in the front but matches the Sensei in the rear. For height, it is taller on both the front and the back. I use the Sensei for comparison because for me at least, the Sensei and the Xai before it is the best mouse size and shape I’ve ever used. SteelSeries didn’t venture too far away from that size other than being taller. But this is of course not an ambidextrous mouse either, the Prime is an ergonomic shape, shaped to the right hand. With that you get a shape that tilts to the right slightly and the design and look of the Prime is a lot closer to the Rivel, especially the Rival 3 design. 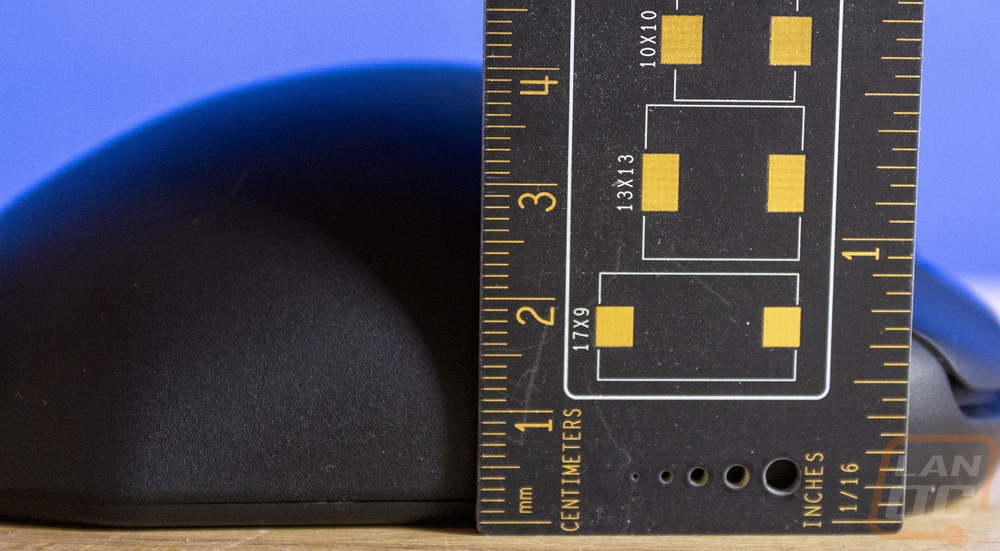 What I mean by it sharing some of the shape of the Rival can be seen with the raised area in the middle of the two triggers that wraps around the scroll wheel and the end of the mouse has more of a pointed shape with the peak being that same raised area. Sticking to the Prime name, the design doesn’t have nearly as much RGB lighting with just the scroll wheel having a ring of light around it. They haven’t bothered to light up the SteelSeries logo on top of the mouse which is good. I hate that everything RGB seems to focus on just lighting up company branding and more importantly, the logo is under your hand, you don’t need to see it lit up. This also goes back to how SteelSeries was in the early days when they were one of the last holdouts for RGB lighting on mice. They also skipped out on the old rubberized coating thankfully and the entire mouse has a slightly textured finish on the base plastic. They went with ABS which long-term will wear and smooth out, I would love to see PBT used here, but the finish is going to hold up a lot longer than any coatings, paint, or grips would ever hold up. Then for the scroll wheel, it does have a rubber finish on it with groves for traction cut into it. I think for overall durability, the rubber on the scroll wheel would be my only concern. For the two triggers, they are using Prestige OM which are magnetic optical switches which are SteelSeries's own switches and are rated at 100 million clicks. 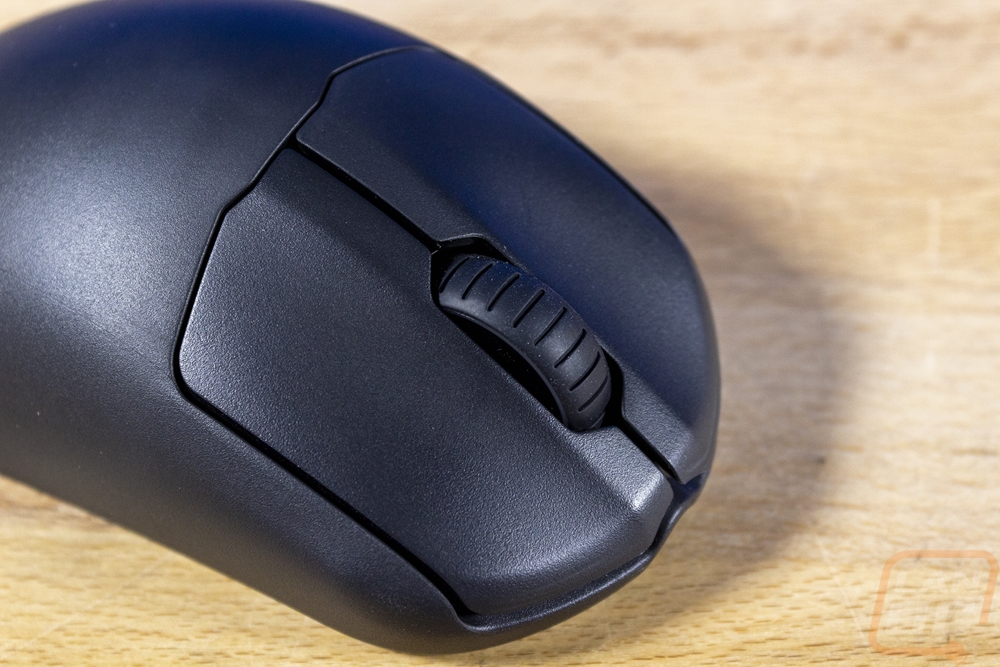 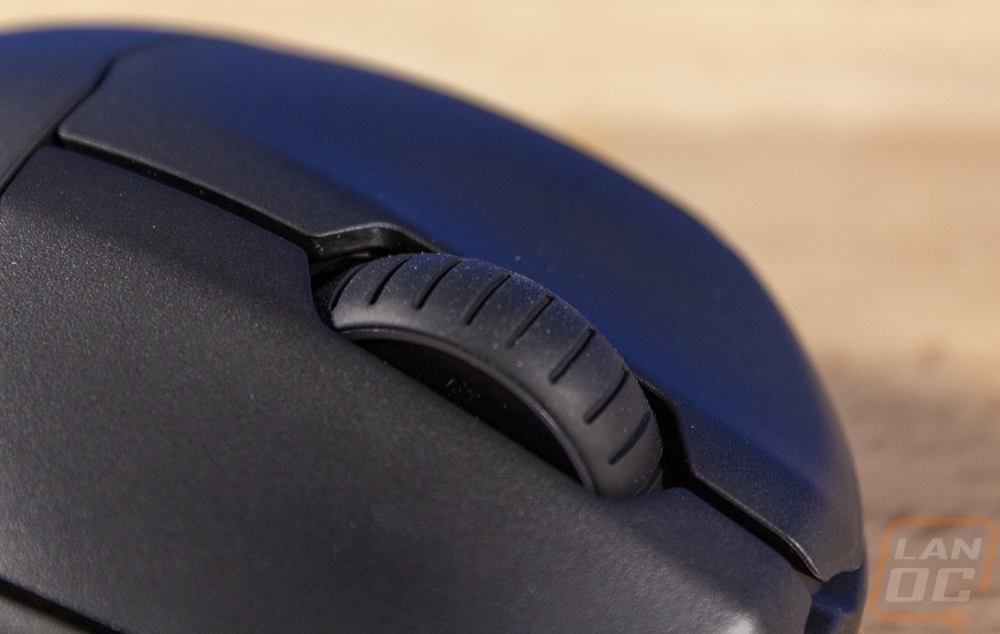 The side profile views of the Prime give some insight on how they were able to get away with just the ABS finish and no additional grips or coatings. The left side of the mouse shares a lot with the sensei. The side has an arch on it that stands out more than the rest of the side and then below that it is sunken in. This gives you a ledge to hold on to and then at the peak are the two side buttons. The side buttons are shorter in length than I would have expected but they also have a ridge on them as well to help continue that area for grip. But unlike the Sensei the right side bulges out at the rear of the mouse, this is where the Prime gets that extra width but then at the halfway point that shape sucks in and has a less visible overhang. This is right where you would put your ring finger and is the other half of giving the mouse grip for people who lift. One other thing that this side profile helps show is that the front of the mouse has an interesting rounded shape on the trigger end of the mouse. Most mice including past SteelSeries mice have the triggers overhanging on the end, it gives a weird look. Kind of like when you are using safety scissors.

The front and back view of the Prime shows how the Prime is an ergonomic design with the left side of the mount having the tallest point but curving down for the right side. The same can be seen from the front as well and I was surprised how much of the tilt was also in the triggers. The front view also gives us a look at where the cable connects. The Prime isn’t wireless, at least this version isn’t. It comes with a detachable cable that plugs in the usual spot. It uses a Micro-USB connection which is interesting because the Prime Wireless and the Aerox 3 both have type-C connections. The plug area is recessed and has a triangle shape to it as well for the proprietary cable to lock into place and to prevent that connection from being damaged.

The bottom of the Prime is of course where all of the certification logos and manufacturing information is hidden away. But beyond that the Prime has four feet, one large U-shaped foot around the bottom then there are two ovals in the front corners. All three of these have small cutouts next to them for easy removal and replacement and SteelSeries sells the replacement feet as well as PTFE if you would prefer those. There is also a glider/foot that wraps around the sensor in the middle to keep that area from dragging. For the sensor, the Prime has the TrueMove Pro which from what I can tell is their version of the PWM 3360 and is the same sensor they use in the last SteelSeries mouse I took a look at, the Sensei Ten. It has an IPS of 450 and can run up to 18,000 CPI. 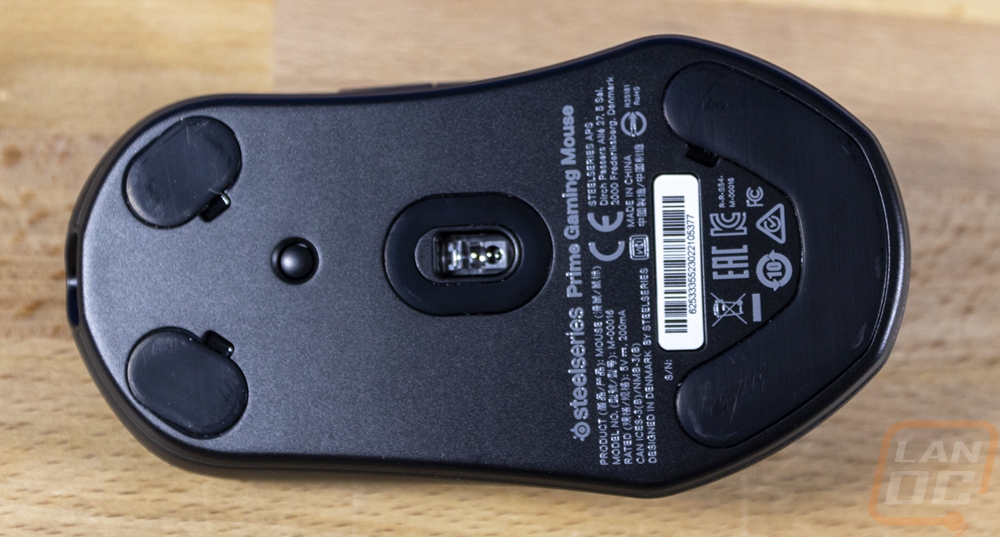 So a lot of the previous pictures may make the Prime look like a wireless mouse, it is not. This is a wired mouse, but with a detachable cable. The cable they include with the Prime is 2 meters or 6.6 feet long with the PC end having a traditional type-a connection and the other end having a micro-USB plug. The cable and that micro-USB connection are proprietary and from what I can tell not all standard cables would fit in the hole. The reason for the proprietary design is to lock the cable in place when it is plugged in to keep the mouse movement over time from damaging the sensitive USB connection. The cable design is surprisingly flexible and the black sleeving installed over it is soft and flexible as well. This helps protect the cable but being flexible means when you move the mouse you are less likely to feel the cable push back at all. The goal is to get the wireless feel, with a wired connection. SteelSeries also sells the replacement cables for just $7.99, which is good to hear and means that if you do damage your cord later on that you aren’t out of luck and they aren’t going to scalp you to get it. 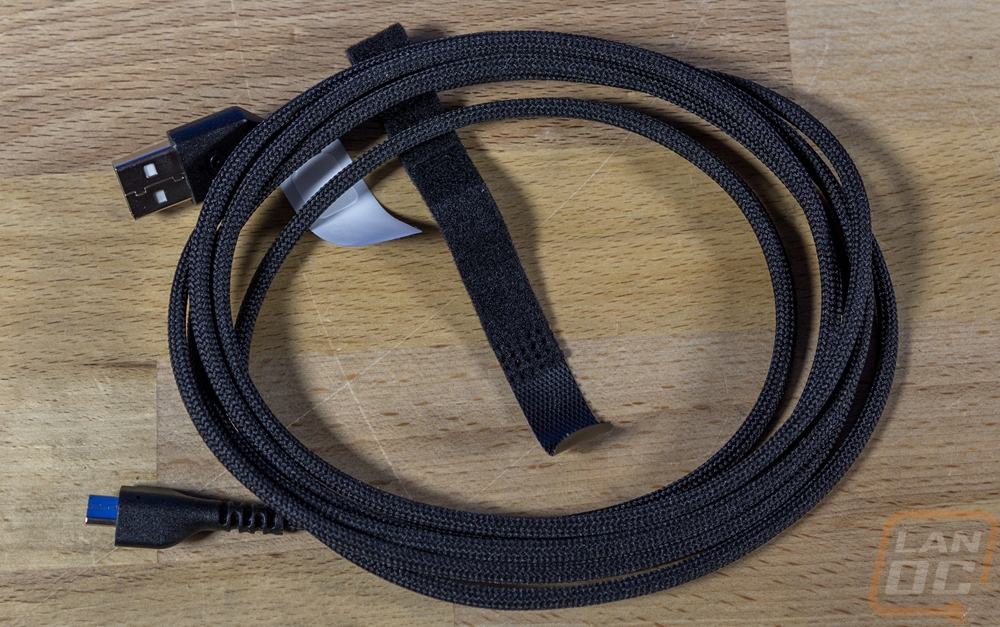 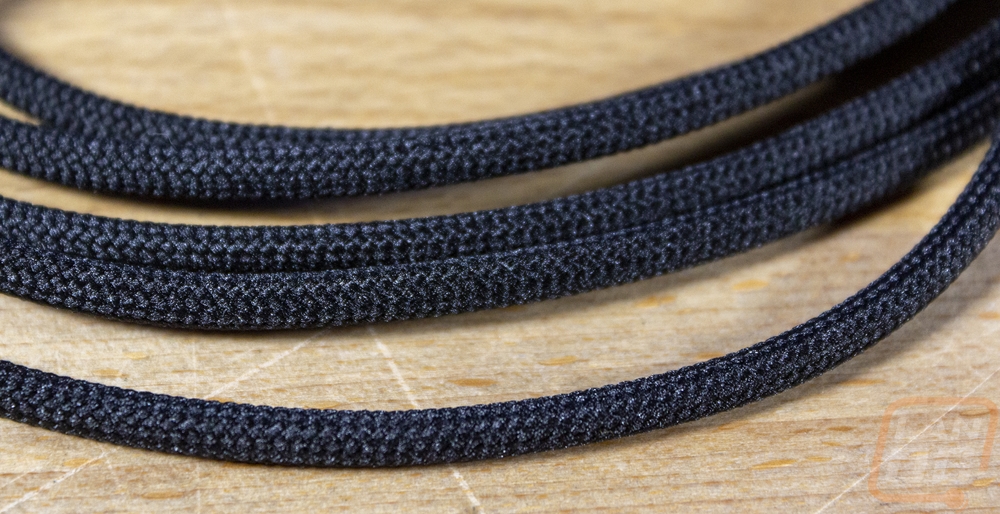 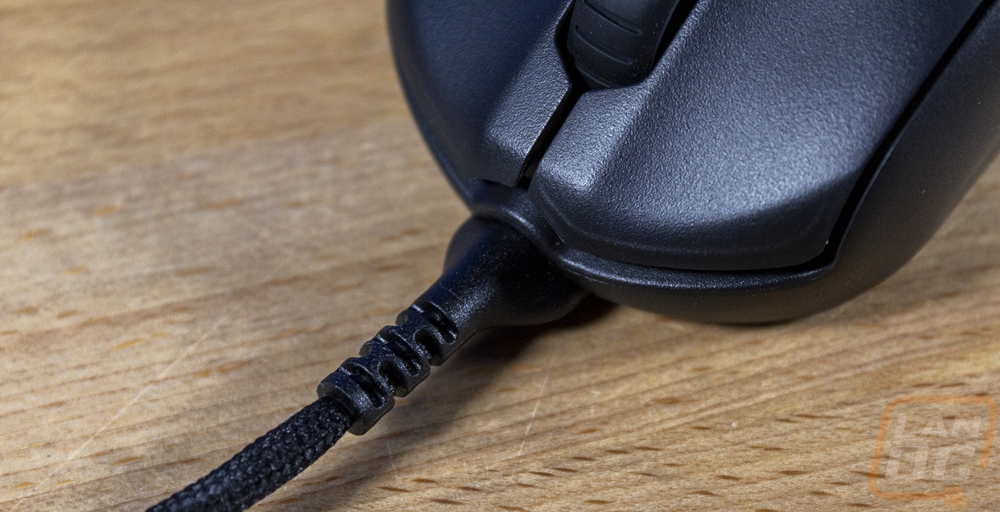 I did also get the Prime up on the scale. SteelSeries has the Prime listed with a weight of 69 grams and without the cord that is exactly what it weighed on our scale as well. Some mice are pushing crazy low weight numbers at this point, but for one with a full housing without holes in it, 69 grams isn’t too bad. I also tossed the cord on the scale just because I was curious and it was 31 grams as well, not that it matters. 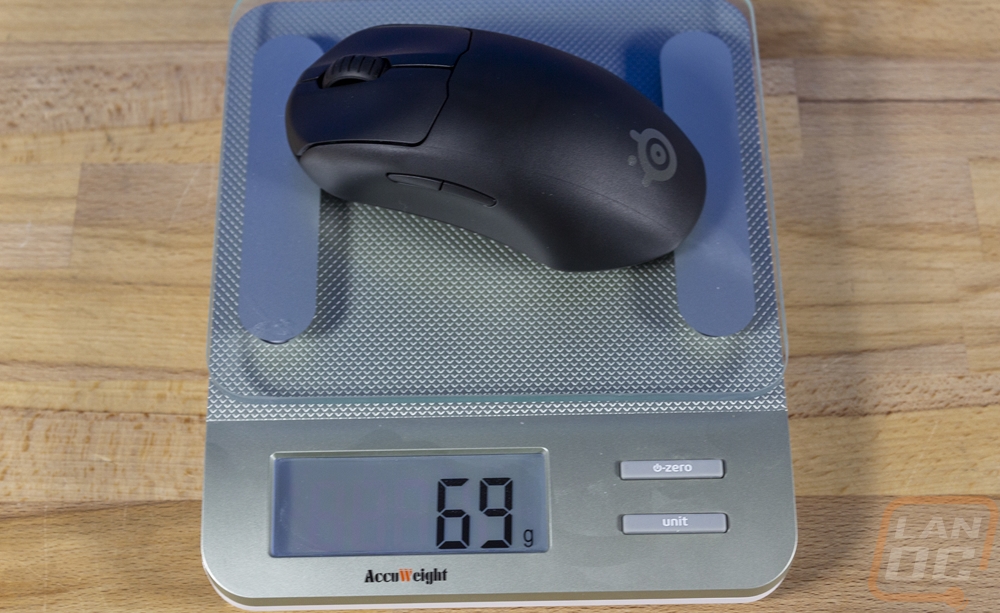 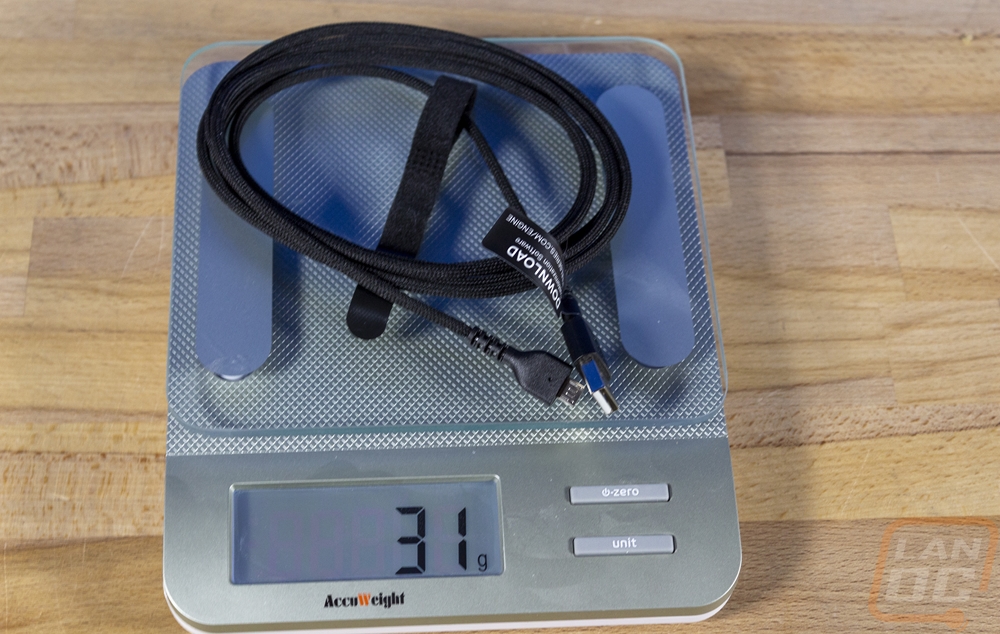 We have 1680 guests and one member online