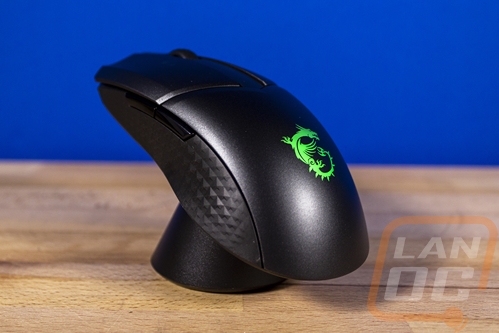 The Clutch GM41 is very similar in shape to the Razer Viper with its skinny section in the middle of the sides and it widening out in the front and back. The GM41 however is bigger overall. The razer, for example, is 37.8mm tall and the GM41 is a hair taller at 38.3mm then the width of the Viper is 57.6mm where the GM41 is 10mm wider at 67mm wide. The GM41 is also longer at 130.1mm vs 126.73mm which means it is a little more focused for larger hands. This wouldn’t be the first time a mouse followed in the footsteps of another mouse. The GM41 Lightweight Wireless comes in a black plastic finish. MSI avoided the added weight that rubberized coatings can add, not to mention too long term durability issues they cause as well, at least on the top of the mouse. They did put grips on the side but I will take a closer look at those in just a second. Overall though the GM41 follows the KISS method where you keep it simple stupid and it isn’t packed full of unneeded features. With just an initial look we can see just the triggers and the scroll wheel up on top and the one RGB backlit logo under the palm. 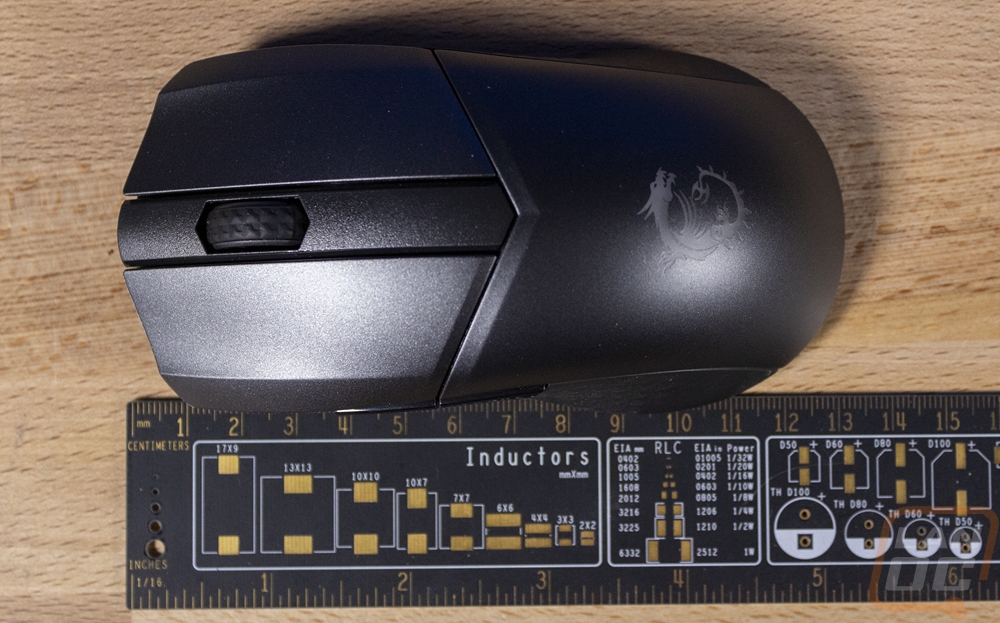 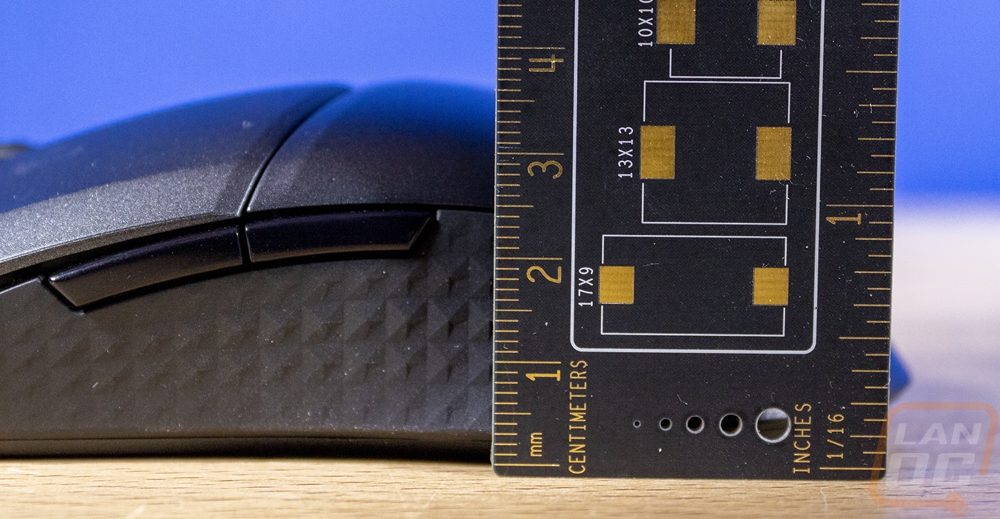 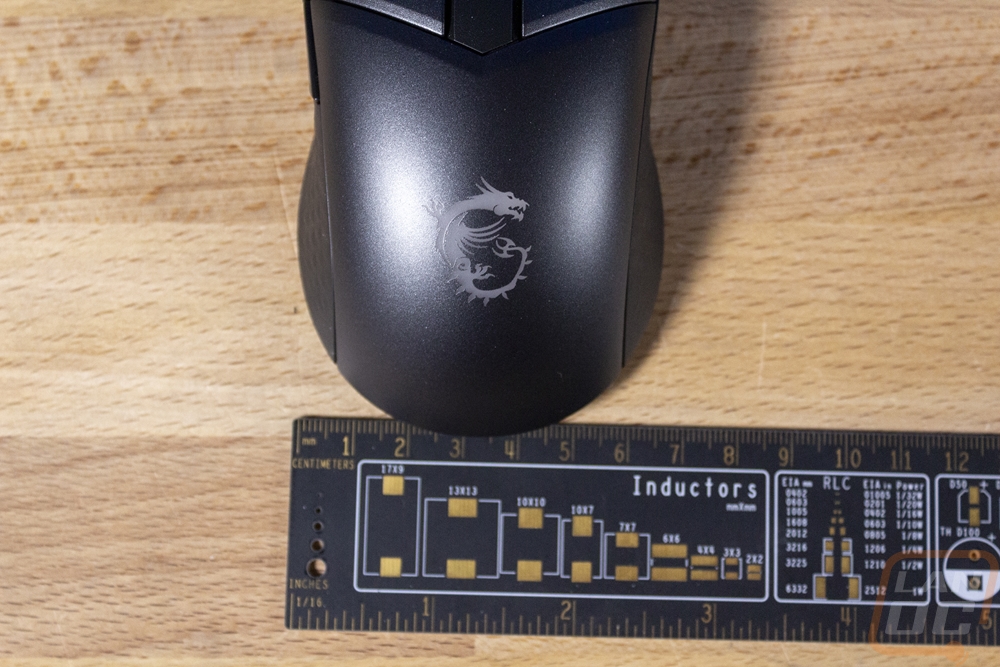 The two triggers are split from the overall housing just like the Viper. If you look closely they also have a cupped shape as well to try to keep your finger centered. MSI went with Omron 60 million click switches under the triggers. These are a little different than the 50 million click Omrons that I have had issues with multiple times in the past, but only time will tell for sure if those issues are worked out. Then in the center, the scroll wheel has a normal down click but no side to side triggers. Then the wheel itself has a triangle/arrow like design repeated over and over on it in the rubber finish to give additional traction. The front of the GM41 has an opening that allows for the charging cable to be used when plugged into the bottom of the mouse.

Both sides of the GM41 Lightweight Wireless do have a rubber grip which I’m not the biggest fan of. These grips typically are the first to break down from oils in your hard and even before then they can sometimes get greasy. They have that same weird triangle/arrow design that was on the scroll wheel for texture. The shape of the sides itself has a little overhang that allows for a good grip even without the grip. On the right side of the mouse, there aren’t any side buttons. The GM41 has an ambidextrous shape, but not having buttons on this side does mean if you use it left-handed you will be down the side buttons so it isn’t completely ambidextrous. The left side does have two side buttons and they sit right on the upper lip just like the Logitech G Pro Wireless.

The bottom view of the GM41 reveals a lot of gliders spread around the bottom. It has two wider gliders on the front, one around the sensor lens, then three around the back. Most are thin which can wear faster than the gliders a lot of mice are starting to get these days. But in the center just below the sensor, they have a cut in design with two contact pads for the charging stand so that did limit the surface area somewhat, but I do think the back pads could be one smile like shaped glider for example. The bottom has a switch to turn the mouse off and it has red and green colors to show which setting you have it on. Then on the other side there is a button, that button switches between the default DPI settings. The back has all of the certification logos lasered onto the plastic then at the front, there is a sticker with the model name and your serial number. Then at the front, that opening is for the included charging cable if you want to hook it up directly. They have a small micro USB port hidden away. I will talk more about it, but I do wish it was Type-C. Then for the sensor in the middle, they went with the PixArt PAW-3370 Optical Sensor which came out last year. The 3370 has a lower error rate and is a little more power efficient than the older 3355 which is helpful with a wireless mouse like this. With the DPI switch button, you can switch between 400,800,1600,3200, and 6400 though the software will allow changes as well up to 22,000 DPI.

Officially MSI has the GM41 Lightweight Wireless listed at 74 grams but it came in at 76 on our scale. This not too bad when we compare it with the Razer Viper Ultimate which is smaller and is a 74-gram mouse as well. The Logitech Superlight that I recently covered is lighter and wireless and there are a few options where the housing has been hollowed out with holes that are lighting as well but overall this is still light for a wireless mouse. 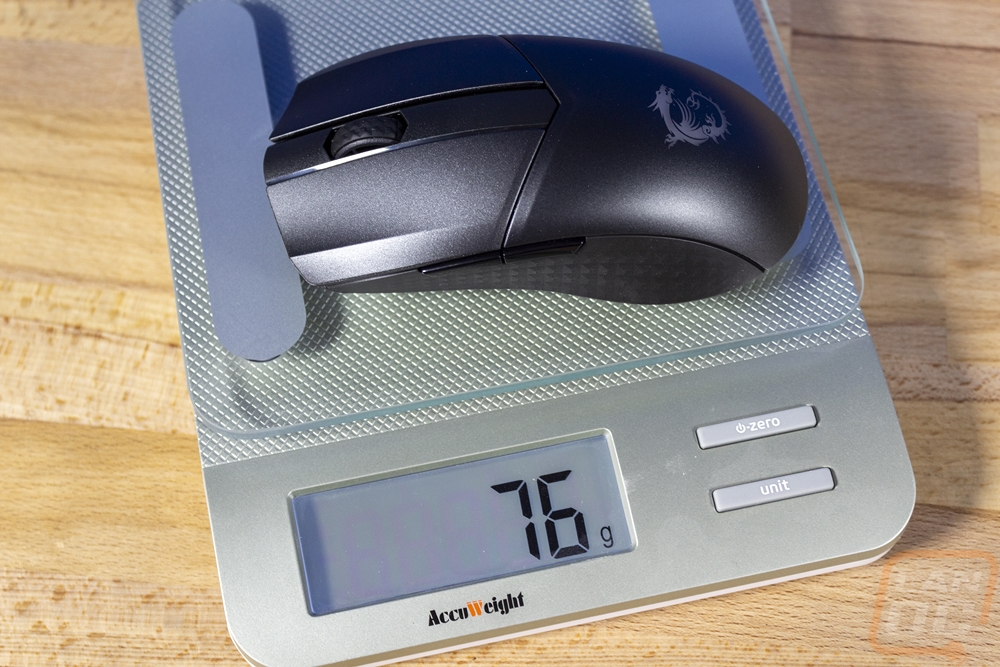 I’m actually surprised MSI included any lighting at all but they did keep the backlit RGB MSI gaming dragon logo up under your hand. 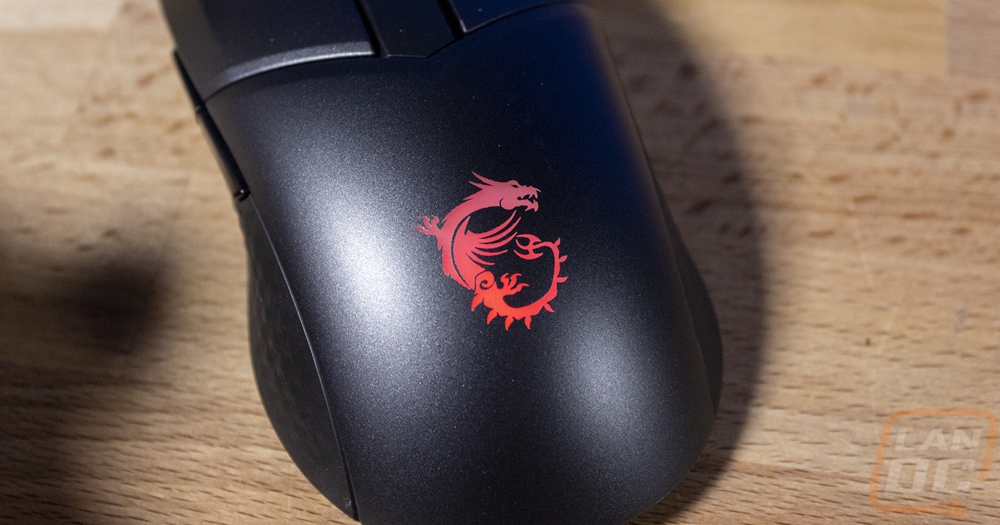 So for the charging cable, you get what they call the MSI FriXionFree cable which to me doesn’t feel any different than a standard stiff sleeved cable. Thankfully this mouse is wireless and won’t need to use this often if at all. It does come with a rubber cable tie which is nice and the type-A end of the cord is distinctive so you will spot it when trying to find your mouse plug especially with the MSI tag right behind the plug. The other end has a Micro-USB connection which I’m not a fan of at this point, so many other devices have moved to Type-C I don’t know why this hasn’t If for no other reason than to make it easy to charge your mouse up with basically a universal cable you already have on your desk.

The GM41 Wireless also comes with a charging dock. The dock is small and simple with a moon-shaped design to hold on to the mouse along with magnets. Then they have two contact bumps on the dock that charge things up. The dock also has a dongle plug built into it and MSI was very specific to put a sticker here warning that the standard USB plug can only be used for the dongle. I would bet that is related to the dock sharing the charging on the same cable. You can however pull that dongle out if you need to and the dongle is small and hardly sticks out of the USB port. The bottom of the dock has all of its regulatory info hidden in the bottom along with the micro-USB plug for the charging cable. It also has a rubber ring around the outer edge to keep it from sliding around but it comes with plastic on it so you will need to remember to take that off. 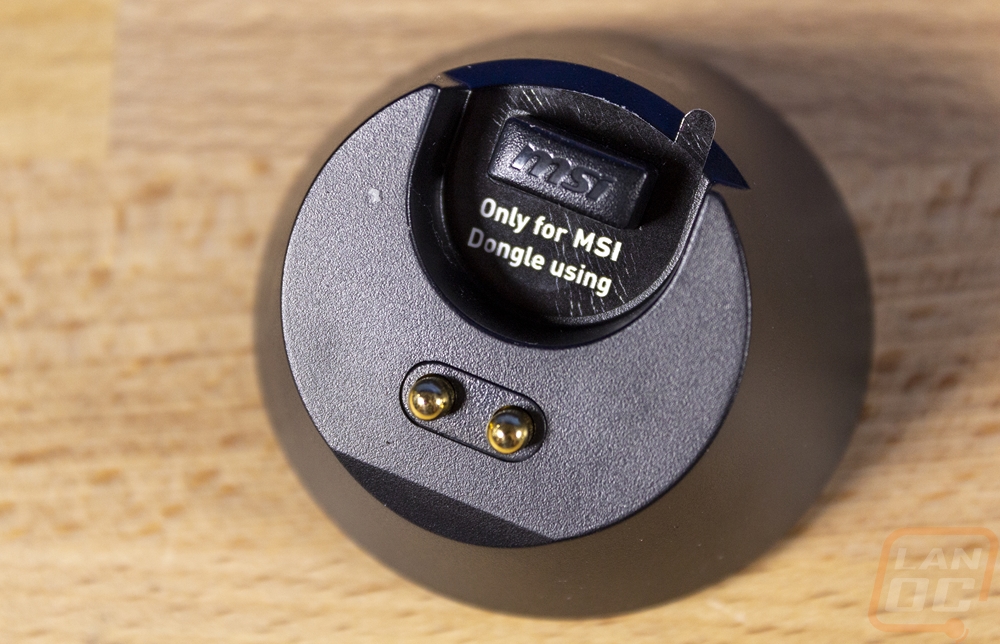 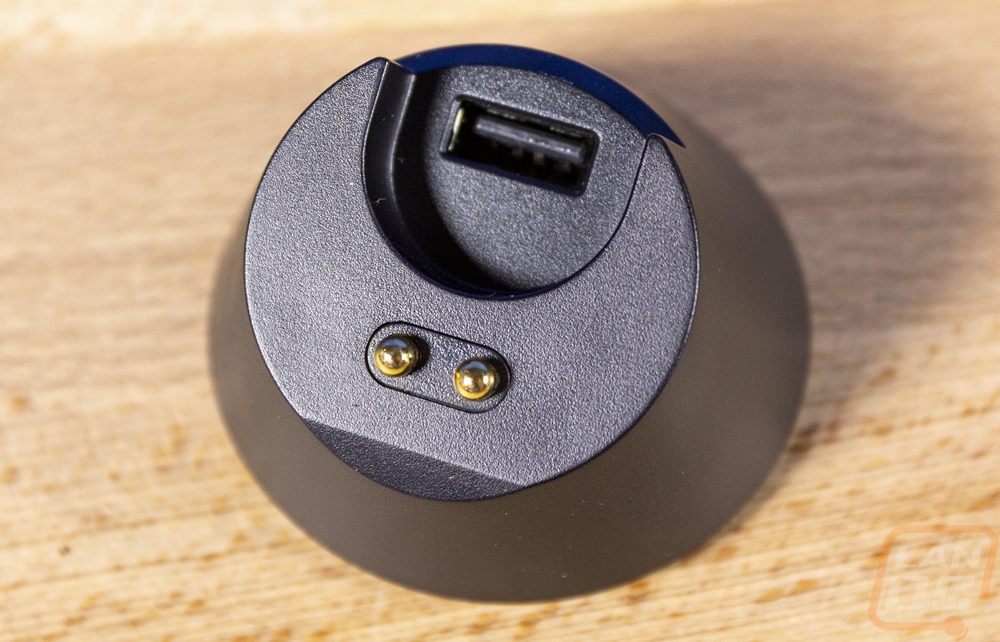 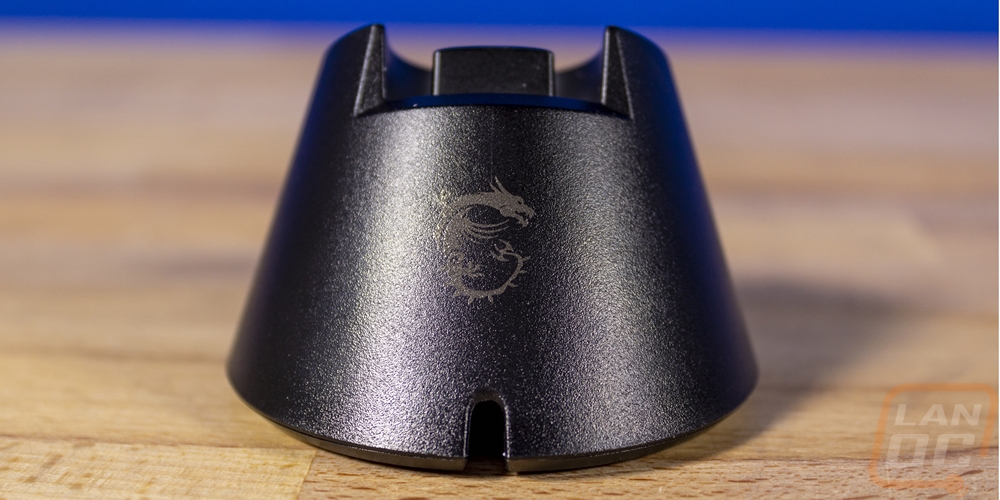 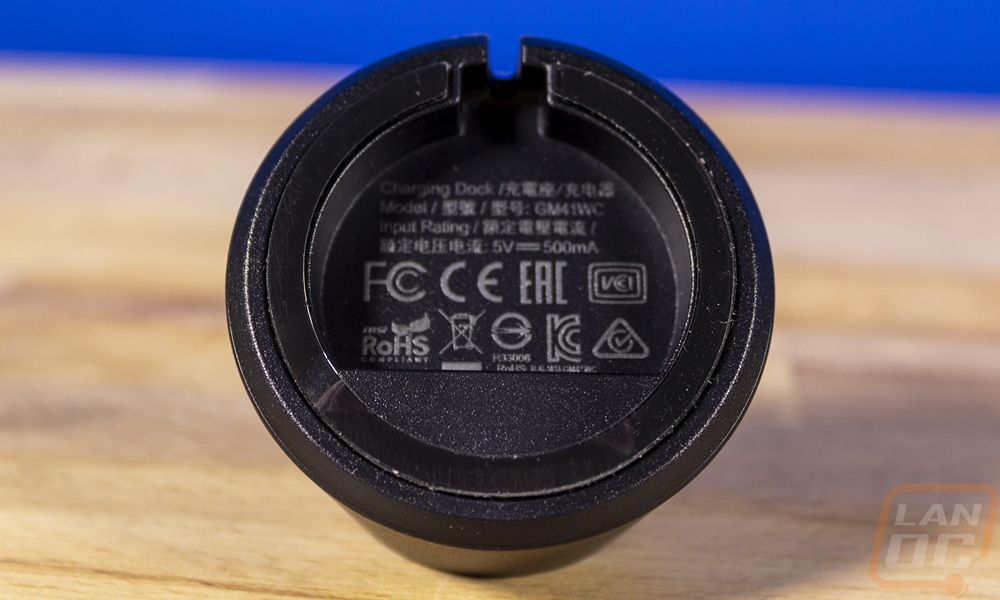 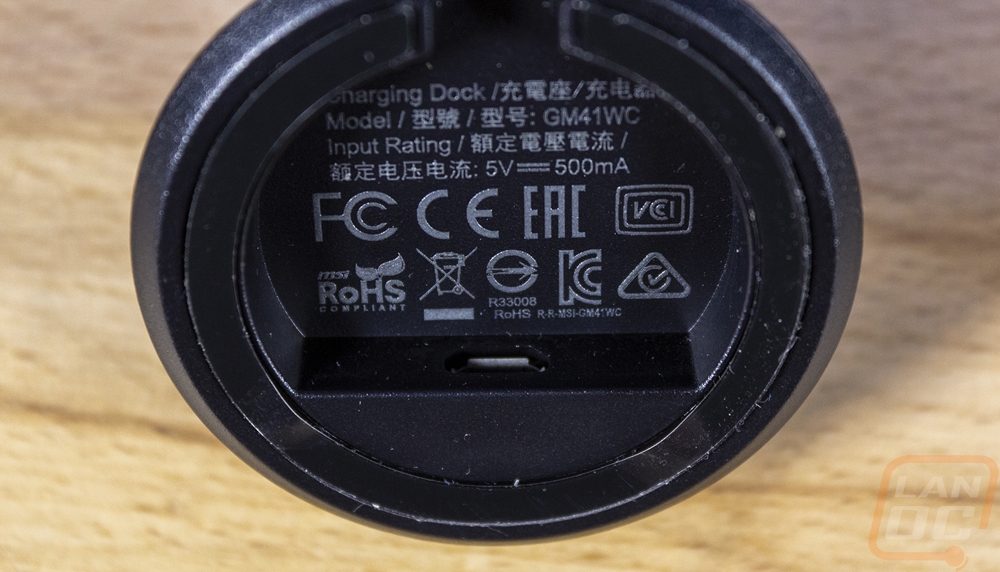 Here is a look at the Clutch GM41 Lightweight Wireless on its charging dock. I like that the dock takes up very little desk space when not in use and the mouse does look cool almost floating over top of it when charging. 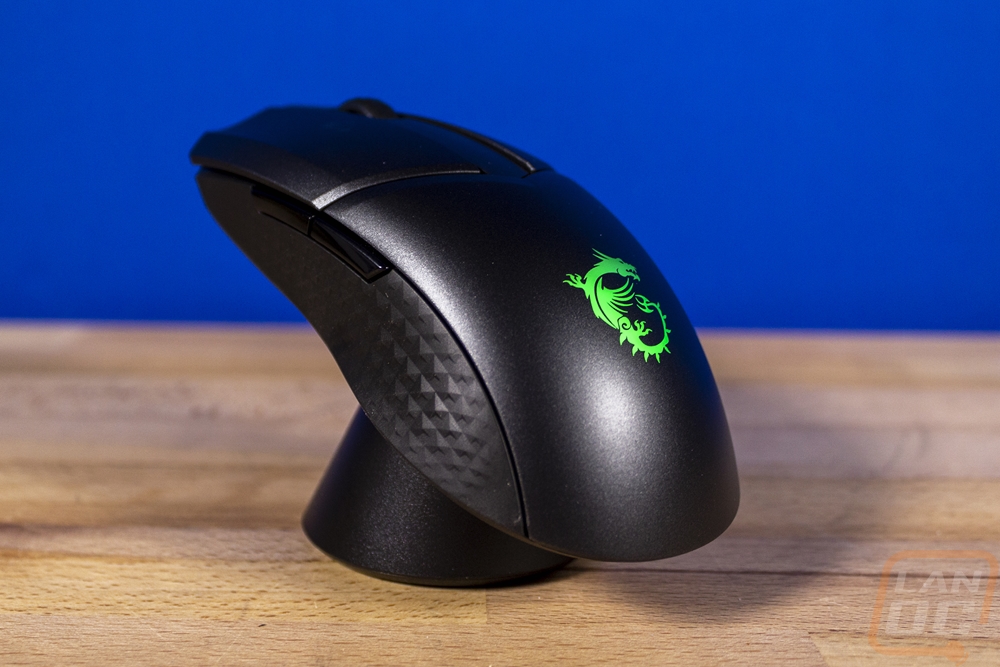 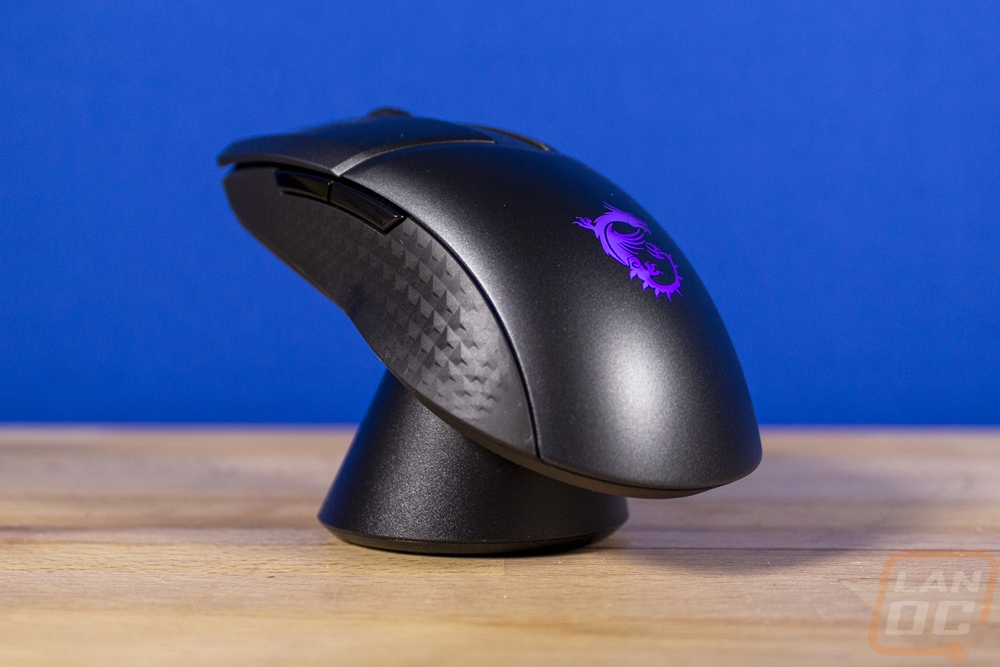 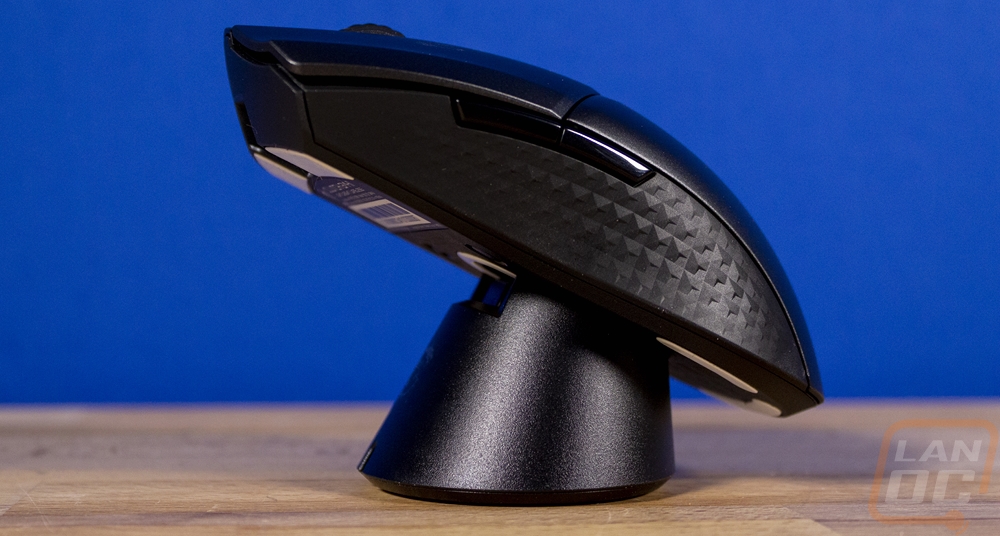