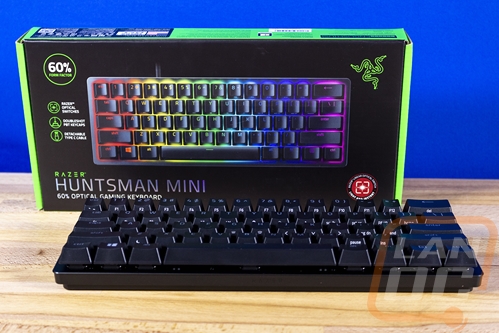 For performance testing, I have been using the Huntsman Mini as my main keyboard. Which means I have been using it for gaming, day to day web browsing, and of course, writing reviews including this one right now and others. Now as I already mentioned my preferred keyboard for writing is a full-sized keyboard, simply because I need the number pad. But I often use a 60% board for gaming at LANs and on our test bench. There are some limitations, and the one example that I can mention right now is Microsoft Flight Sim 2020 which uses every key two-fold. Making 60% difficult. But for my normal league of Legends play switching to the Huntsman Mini didn’t take even a second thought. In fact, due to Razer now using a standard bottom row and the traditional keycap design the switch was seamless.

Now the Razer Optical switches had my curiosity. My initial complaint about the older MX like Razer mechanical switches was that they had a little to much play and wobble. This is also a big issue with optical switches as a whole. So seeing the stabilizers built into each switch and the box design was huge and it shows in the overall performance. I haven’t had any issues, even when hitting the switches off-center. The small pads built into the top of the switch were the keycaps attach is also noticeable when typing as well. Especially when combined with the thicker PBT keycaps which also help dampen sound. Even as someone who sometimes bottoms keys out hard, typing on the linear switches is shockingly quiet and soft. I would love to see a third switch design that is tactile but not loud like the clicky option to fit in between the two current options. But beyond that I really can’t complain at all, in fact, I like typing on the combination so much that I would be willing to give up the tactile feel that I prefer for this.

I didn’t talk about the legends too much in my features section. But I have to point out that the old “gamer” fonts are all gone and a font that looks more like Calibri is now used which is large and easy to read and just professional looking enough to be usable in an office. The double shot keycaps look great and it is a big relief to know that the PBT will limit wear and the wear that you do see will never wear off any finish or make the legends unreadable. This is huge for long term durability, especially when combined with the life of the optical switches. The only issue I had here was with a few of my legends looking almost bold with a thicker font for some reason. I think it is a defect or bad run in a few of the doubleshot keys. You can see with the B and the A in the picture below. Being thicker makes them also a lot brighter and it stands out a lot.

Speaking of the lighting. You can switch lighting effects without software which is another big change in a good direction by using FN+CTRL+1-7 to flip through 7 lighting effects but you can’t safe lighting profiles to the keyboard itself. Sadly though there is no built-in memory so custom effects or even basic things like custom colors require defaulting back to the software. Adding in controls like Cooler Master and Ducky have used in the past to program your lighting without software would be nice. Or at least adding memory so you can program things and close the software if you want without it all going back to a default layout. But the lighting does look good when you have things set up. I took a few example photos and beyond the issues with a few bold keys which were keycap issues, not lighting issues I like the lighting. With the lighting diffuser being at the top it also doesn’t have light leaking out of the bottom even without a traditional bezel.