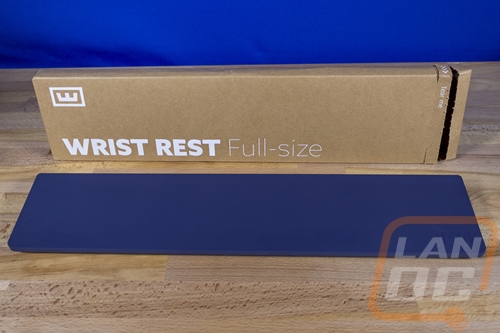 From the launch of the original TKL Wooting One, the team over at Wooting in the Netherlands has been an amazing example of what can be created from the community and more than anything openness. When I took a look at the Wooting One I loved that with their software you could see a full timeline of what they are working on and what is in the future. But they have done the same all across the business, following their original Kickstarter roots. Even on the about page on their website you can see their timeline of the good and bad things that have happened. So when I saw they were going to make a wrist rest I was following it closely, watching as they figured out their design, picked colors, and worked on production. Well, the Wooting Wrist Rest has come in and for the last week and a half I have been using it. Today let’s take a look and see what it’s all about and then I will talk a little about how it’s performed so far.

Even with their original launch of the Wooting One, Wooting was careful to keep packaging in mind. Often startups and kickstarters will skimp out on packaging but it is nice to see the attention to detail. In the case of the Wrist Rest, they came up with packaging once again. Ours sadly came opened up, I’m not sure if that was a customs issue or what happened. But the idea is for it to all be sealed up with that simple tear me tag letting you pop the end off and slide your new wrist rest out. Now the packaging is a brown cardboard but it has the Wooting logo in the top left corner and the Wrist Rest name and size which for ours is the full size on the front. I’m surprised they didn’t also use the Wooting word on the front at all, but just the logo keeps things simple. The front edge shows a line drawing of the rest which as you can imagine is extremely simple lol. Then around back they have a spot printed for the sticker which allows them to change barcodes and to have multiple options in the full-size length for colors. The back also has a note about taking a break and alongside the RoHS certification, they included an icon of someone getting spanked lol. 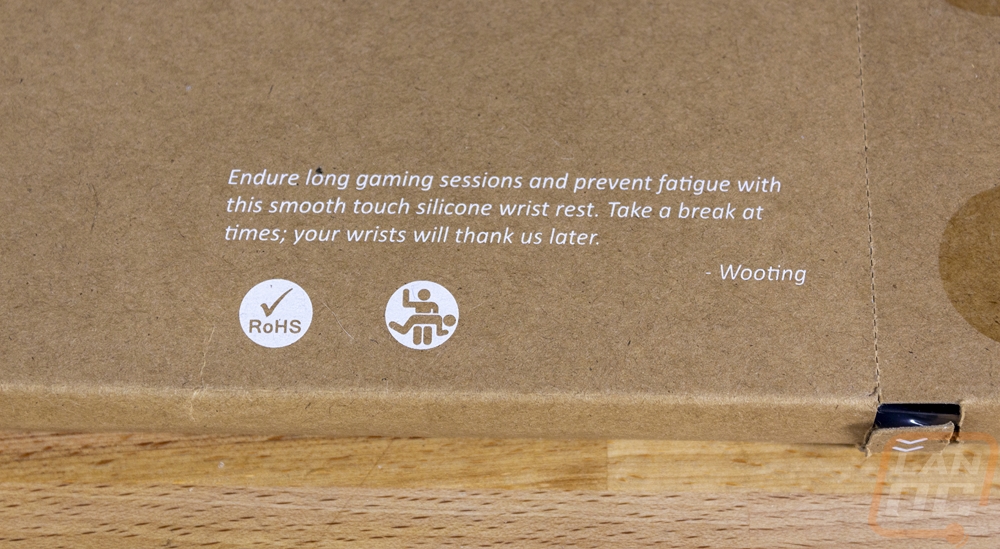 As you might imagine a wrist rest isn’t going to have a lot to talk about but before getting into the features when you pull it out it does come wrapped up in plastic to keep it clean and to avoid any scuffs from inside of the box. 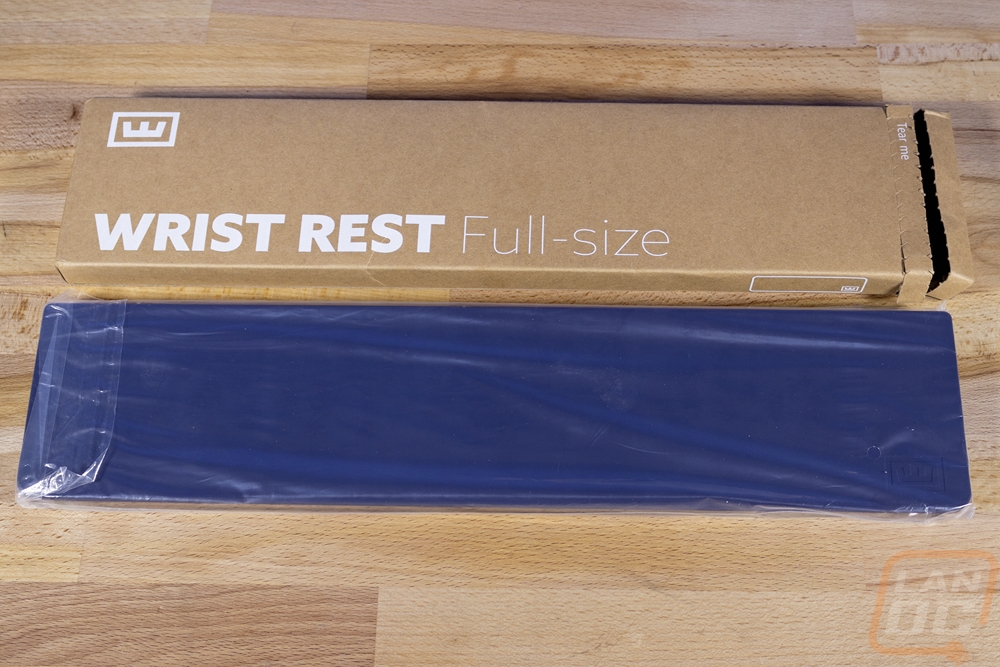 Okay so the packaging says Full-Sized on it, what variations can you get the Wooting Wrist Rest? Well just like their keyboards you can get them in both full-sized and TKL. Full-sized means it fits a traditional keyboard, not some of the ultra-wide gaming models. Then TKL is a tenkeyless keyboard aka one without a number pad. The Full-Size model is 17.52 inches long, 3.94 inches wide, and .79 of an inch thick. The Tenkeyless model is the same except shorter at 14.45 inches long. Both are also available in two color options as well. They have Midnight Blue which is what our sample is and what they call “just black” which is well.. just black. They didn’t have a black model to send as well which was a bummer but the blue looks great. 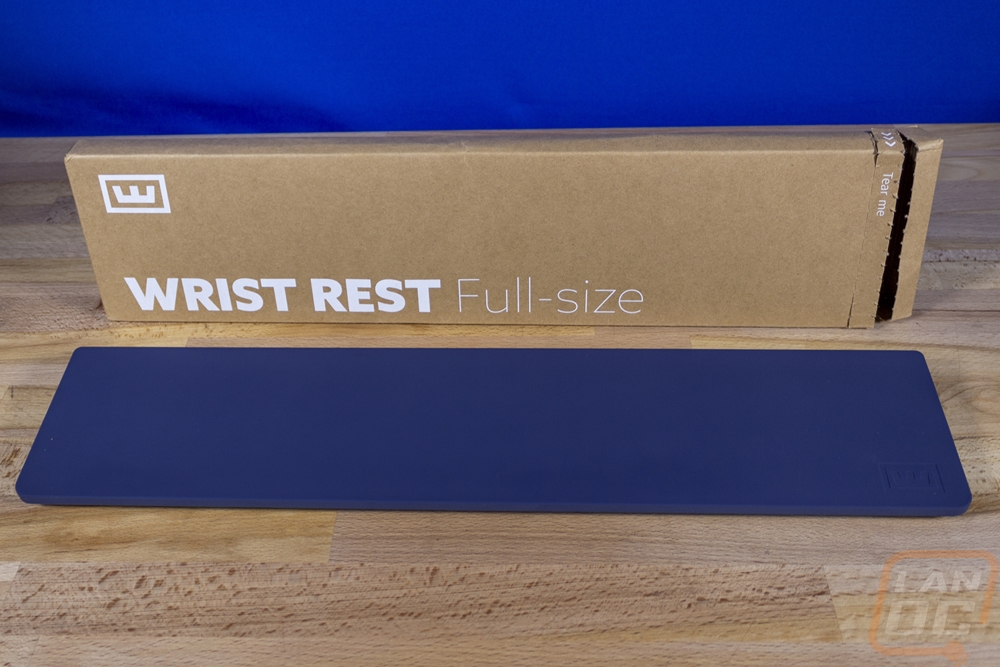 So the entire design on top is smooth with just a slight rounded edge and the only branding on the entire pad is in the far right corner where they have the Wooting logo debossed into the wrist rest. The shape also has rounded corners with the bottom corners having a bigger radius. 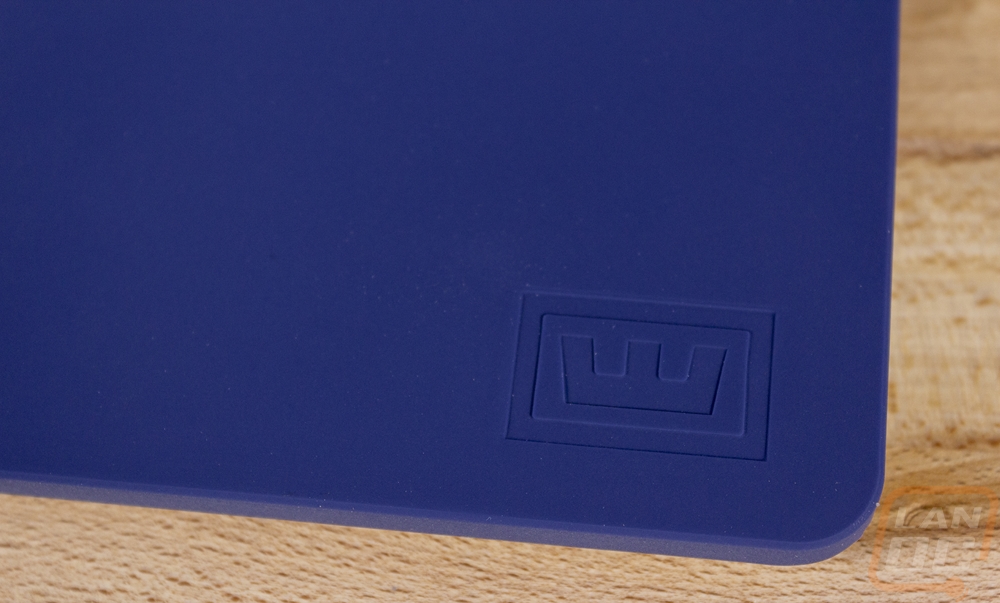 The most unique part of the Wrist Rest is the design of the bottom. They used a hexagon shape that is repeated over and over again and overlapped horizontally and vertically that gives the bottom of the pad a combination of open air space and firm support. They did this because Wootings' wrist rest is made completely of silicone. A lot of wrist rests use a foam or a combination of foam and leather. I’ve also seen wood designs in the enthusiast market as well. Silicon wrist rest might make you think of those older style pillow like designs that are basically a breast implant and this isn’t that either. This is a solid injection molded silicone, just like you are now seeing in baking for pads, cookie sheets, and even to replace oven mitts. When combined with the thickness of a wrist rest the opened up area under helps give it a little more flexibility. 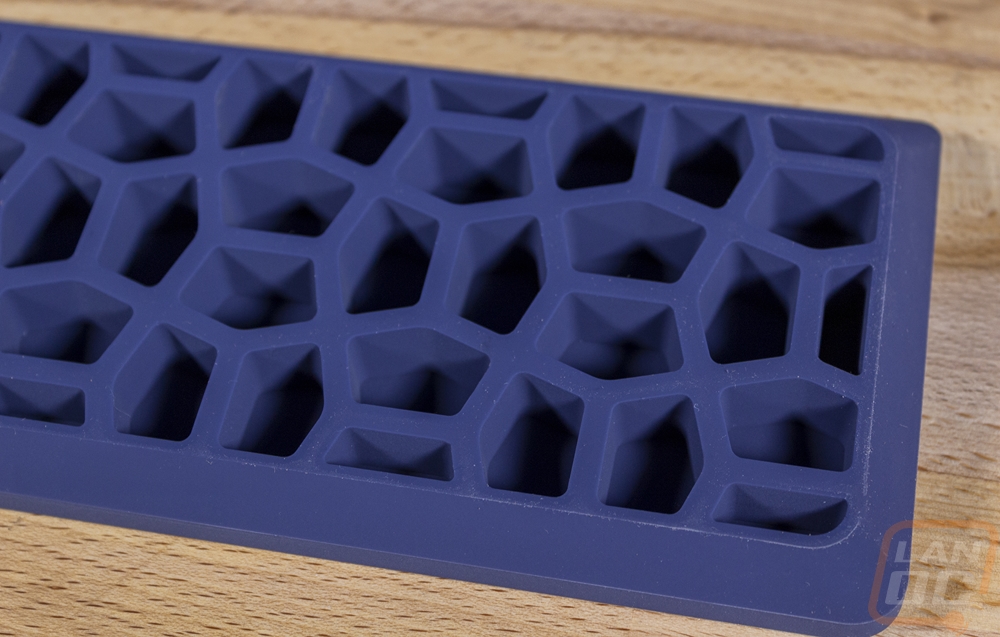 In addition to the unique design on the bottom, the shape does cut in and get thinner all around the pad as well. It also has an angle of 4.5 degrees to help with ergonomics and to make sure it lines up with a traditional keyboard at the top edge.

Now I would normally do a full section on performance, but for a wrist rest there isn’t as much to talk about as a keyboard or some other PC hardware components so I’m going to also talk about my experience with the Wooting Wrist Rest here as well. I was really curious to see how this pad would perform. We use a lot of silicone products in the kitchen because they are flexible and easy to keep clean. So those same benefits were exciting for a wrist rest as well. But having never used a design like this, I was also curious what issues I might also run into. Let me preface this with the fact that I haven’t been running a wrist rest at all for around 6 months but in the past, I have used a few of the foam models, a custom leather one with padding in the top, and various other designs that come with keyboards.

The thickness of this pad ends up making the silicone firm so pushing on it, unless you miss one of the many supports it will hard to push in. In the picture below I was pushing in one of the open areas and still, you only get a little give. This isn’t anything like the foam designs that I have used which are extremely flexible. It reminds me of a LOT of the pads built into the keyboards where it is a thin rubber pad on top of plastic only with more flexibility than that. You can pick it up and it does flop around. But I would love to see maybe half as much of the supports to let it be more flexible to the touch. 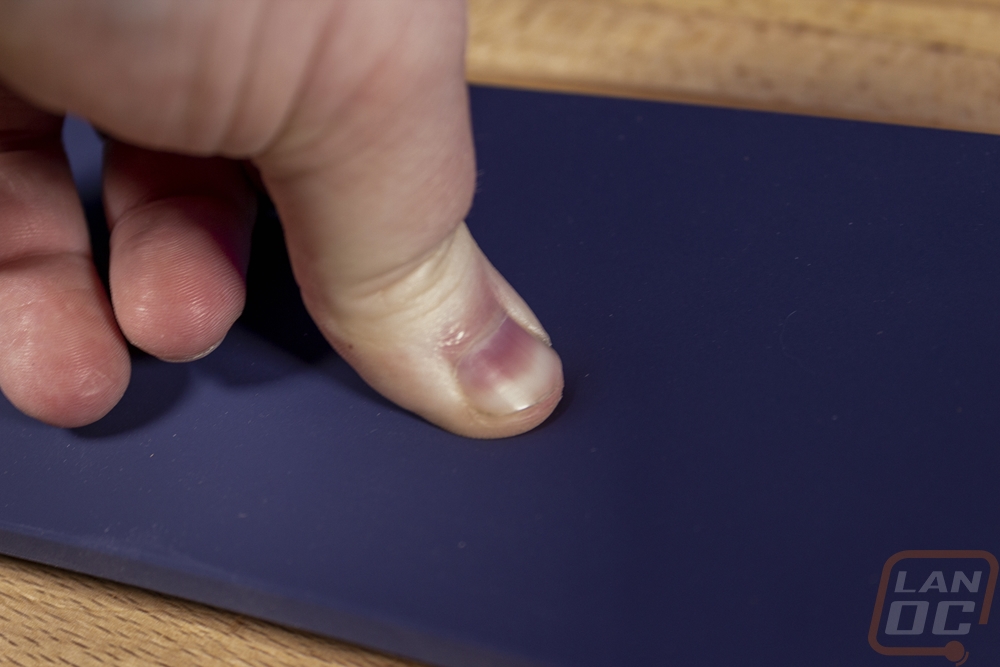 It has its downsides as well though, one I expected and another I was surprised with. Being silicone I expected it to get dirty and it does. Hair and even dead skin sticks to the wrist rest and if you are oily that can transfer over to the pad as well and make it a little greasy. What surprised me though was that the silicone seemed to suck the oil out of my wood desk. It did this almost immediately. I use an oil once a year to keep the condition of the wood up and you can see in the picture below how it dried up the area where I put the pad almost instantly. 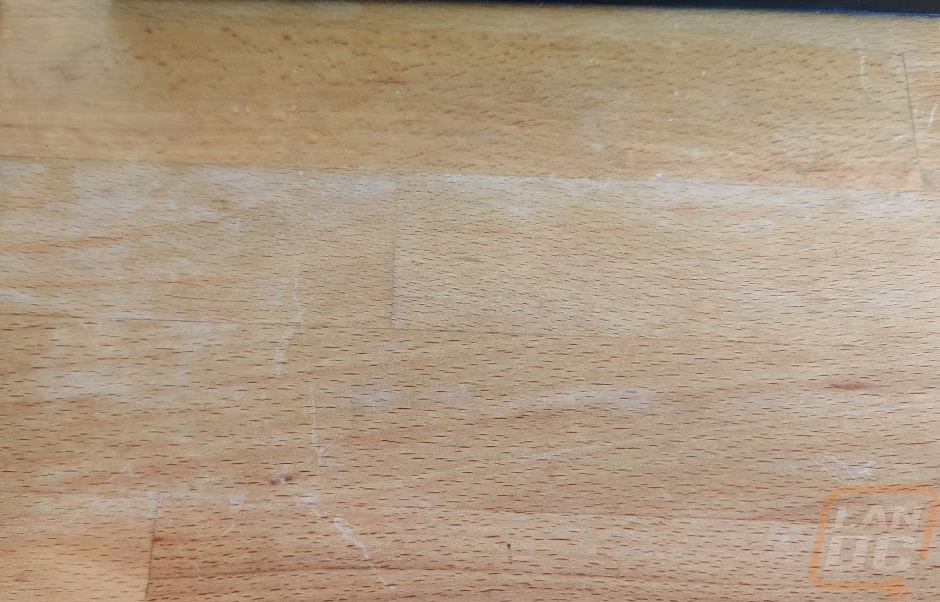 Just like with the Wooting One when no one else had an analog keyboard option available. Wooting has created a unique product with their new wrist rest. Going with silicone is interesting, especially for the potential for long term durability. Only time will tell, I haven’t had the Wooting Wrist Rest long enough to say for sure, but silicone should be able to hold up to a lot of abuse and even be washable any time you want to wash it. Even just by tossing it into the dishwasher. Which is good because one of the downsides to the silicone is that it collects a lot of dirt and hair. Their design is solid and it fits up well even with the Cooler Master Masterkeys Pro L that I tested it with both where the rest and keyboard meet and for length. Wooting’s decision to also offer the blue option is nice and because of the design, I’m hoping that other colors came become available later, especially bright colors.

The unique design has a few downsides in addition to getting dirty which I already mentioned. The main one for me is that I wish it was a little more flexible. The silicone is firm when thick and Wooting used that crazy design on the underside to help with this but I think opening up the repeating hexagon shape on the underside a little more would add a little more flexibility to make it softer. Maybe allowing for a firm and soft model. The other concern I had was just with how the pad seemed to pull the oil out of my oiled wood desk.

As for pricing, some might find the $29.99 MSRP to be a little higher. But even when compared to the Glorious Gaming Wrist Pad which is popular the Wooting is only a few dollars more and I think the full silicone design is going to last a lot longer. I don’t think the Wooting Wrist Rest is for everyone, because some will prefer the softer foam pads. But it does end up sitting between the hard wood designs and the soft foam. 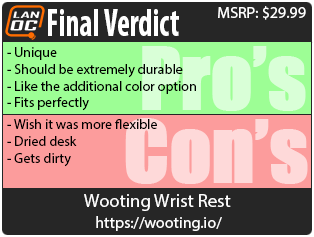 You might call him obsessed or just a hardcore geek. Wes's obsession with gaming hardware and gadgets isn't anything new, he could be found taking things apart even as a child. When not poking around in PC's he can be found playing League of Legends, Awesomenauts, or Civilization 5 or watching a wide variety of TV shows and Movies. A car guy at heart, the same things that draw him into tweaking cars apply when building good looking fast computers. If you are interested in writing for Wes here at LanOC you can reach out to him directly using our contact form.
Discuss this article
Log in to comment
Posts in discussion: Wooting Wrist Rest