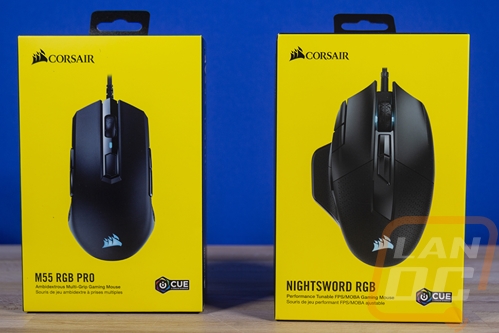 I’m starting off by taking a look at the M55 RGB Pro which is still a little complicated of a name for how simple the mouse is. Anyhow the packaging is simple and to the point. You have a picture of the mouse taking up most of the front of the box. Behind that, the box is decked out in that bright yellow that Corsair loves to use on all of their peripherals and some of their other products. The Corsair branding is in the top left corner and not too in your face and the same goes for the model name which is in the bottom left corner. They do mention this is an Ambidextrous mouse under the name and they have the iCue logo for Corsairs software on the front as well. Around on the back of the box there are mod pictures of the mouse, this time from other angles. They also have a shortlist of key features listed out and repeated over and over in different languages. I love that Corsair basically just went crazy with pictures, that’s about the only thing I really need unless they want to go old school and also include a door that lets you feel the mouse shape as well. But that has mostly been cut out these days with retail being a smaller and smaller portion of sales. 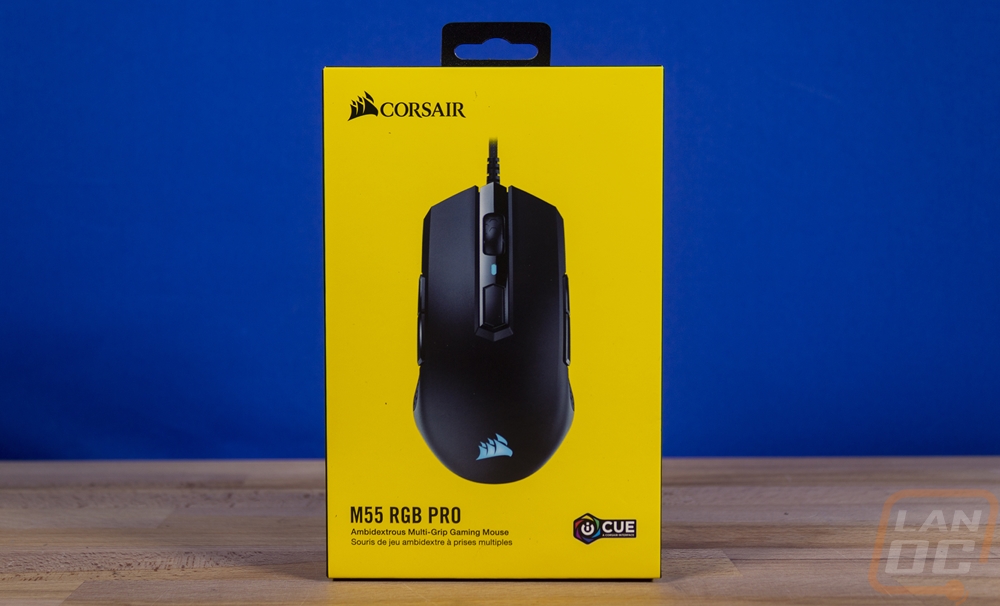 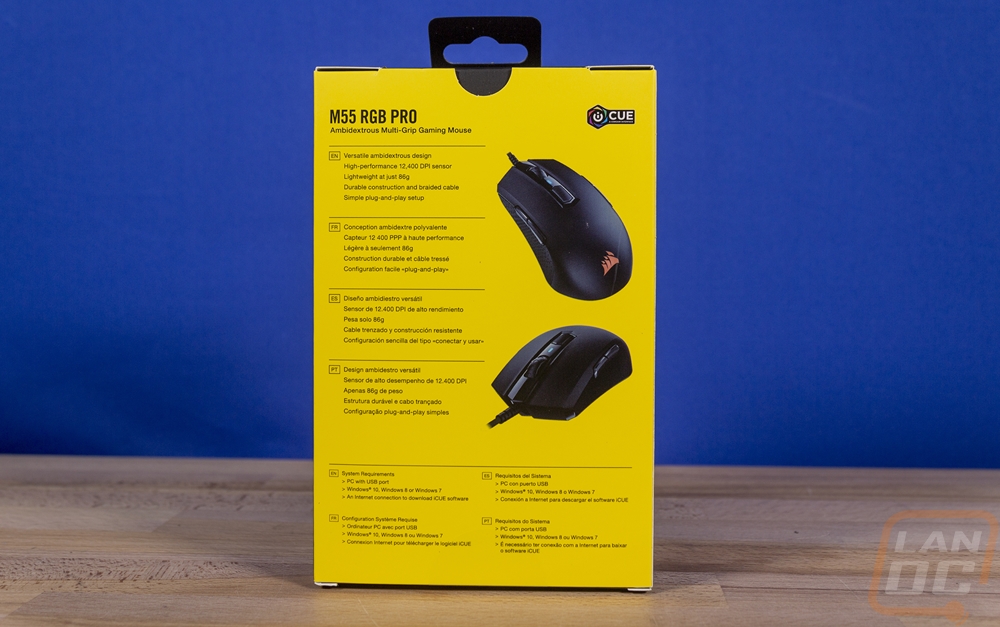 Inside the box, the mouse itself comes wrapped up in a plastic bag. Beyond that you just get some documentation. One is a user guide which includes how and where to get the software for the mouse and how to use it. The other Is a warranty guide which is going to go over the two-year warranty. 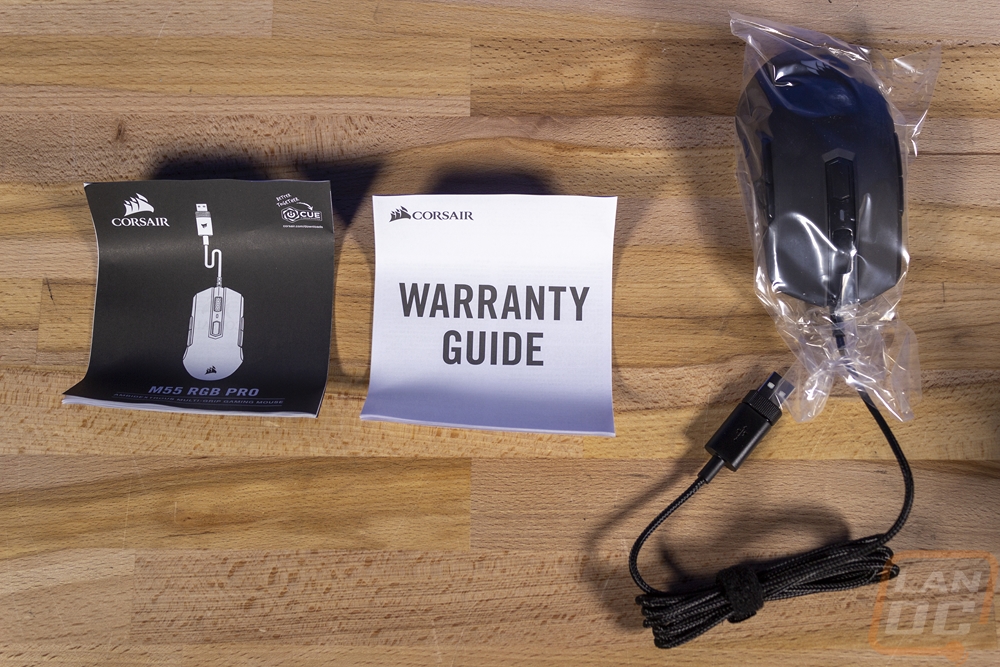 So the M55 RGB Pro is a simpler design like I mentioned before. It reminds me a lot of the Sensei in that it has the ambidextrous layout that can work with right handled or left-handed users. That means if you split the mouse down the middle the shape is the same on both sides. Not all ambidextrous mice will have buttons on both sides though but this one does. The shape is smaller than what most of Corsairs mice are and that smaller size helps keep the weight down as well with this thing coming in at 86 grams. It's not an ultra-lightweight mouse but being around 80 normally is where I can start to really feel that nimbleness.

Now the shape of the sides do have a slight overhang to allow for picking up the mouse but Corsair still went with rubber grips on the sides which I'm not a huge fan of. They do help early on but this is an area that is a lot more likely to break down over time or even on a more short term start to feel greasy with oils from your hands or oils from those chips you have been eating. Don’t think I don’t see you! Both sides have the same dual button layout and the buttons sit up at the top edge of the sides and the body line flows through them with a ridge about 2/3 up on both buttons.

The top-down look shows the M55 Pro with a little bit of a booty that flares out and we can see that there is a DPI button as well as an LED light to show that DPI setting sitting behind the scroll wheel. Then back on the back there is the corsair sail which falls in the heal of your palm. The logo is RGB backlit which is where the RGB in the product name comes from. I’m glad Corsair didn’t go crazy with the lighting, I know they normally like doing that. But this is a more simple mouse and I like the simple and clean look. The mouse itself on the top has a plastic finish, not a painted finish that may wear thin or a coating that will eventually fail. 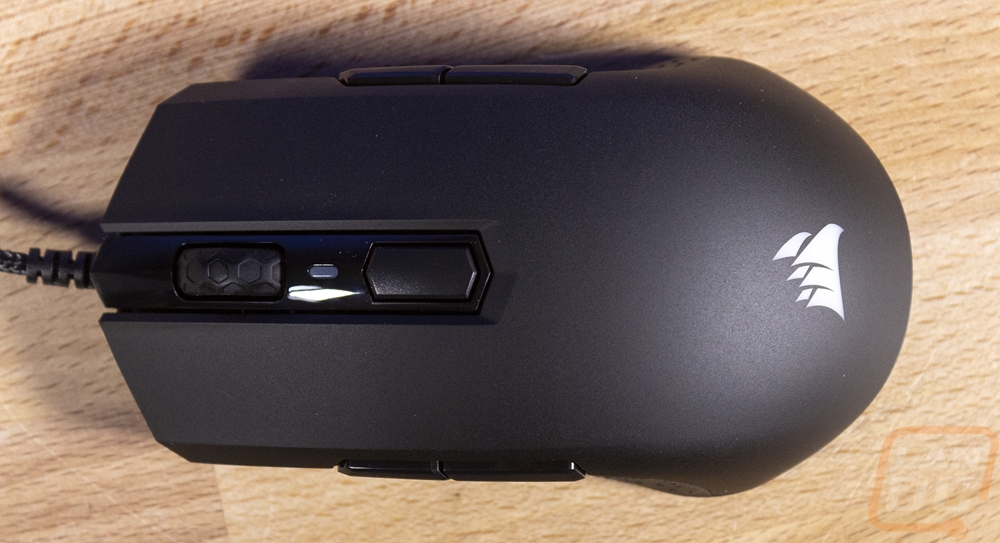 That booty on the M55 sticks up a little as well and I don’t mind it. It gives the mouse a unique look when compared with all of the other mice that fit in this same size and overall shape.

Now that scroll wheel, Corsair we need to talk a little. I don’t need honeycombs for texture on the wheel. Keep it simple with something that if it gets greasy later is still going to grip. Give me simple lines or something similar. As for the triggers, they went with Omron 50 million click switches which are one of the firmer loud clicks that always feel good to use. That is the same switch that I personally have been having trouble with on a few Logitech mice, so reliability could come into play. But that could also be a Logitech exclusive issue, I’m not sure. Just know that if you start to get double clicks, reach out to Corsair and replace the mouse, the random double clicks will make you think it is you until it gets so bad that you can’t ignore it anymore. Anyhow overall Corsair went with a good brand, good feeling switch, and one that “should” hold up. 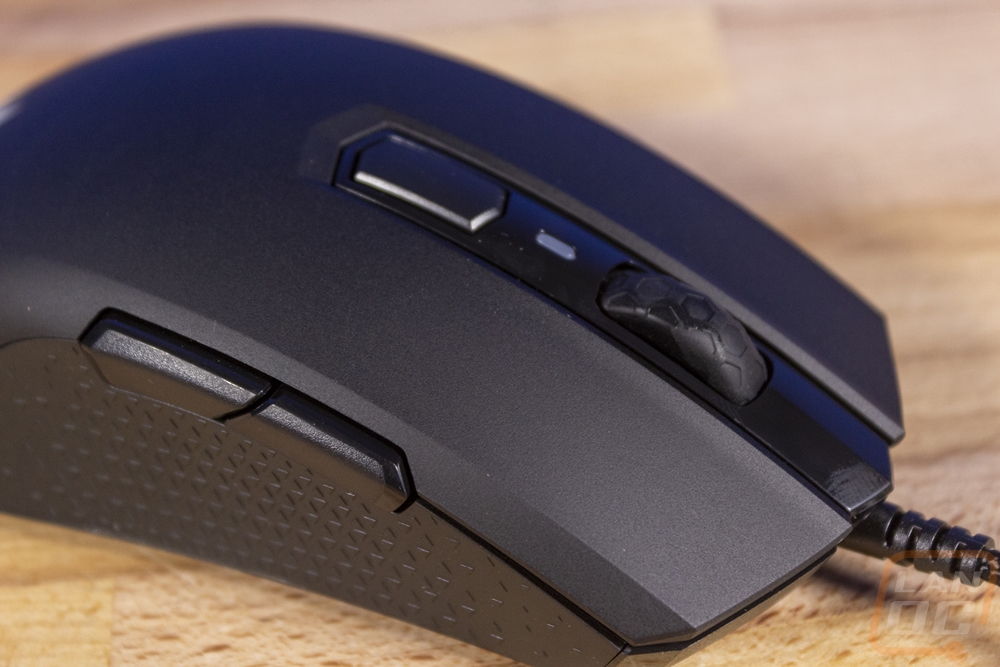 On the flip side of things. The bottom of the M55 Pro has a huge glider on the rear which given the weight I sometimes push on my mouse I like and two small gliders on the front. They aren’t hyperglides or anything really cool, just simple old Teflon gliders and that is good with me. As for the sensor, it is close to being center-mounted which is good. As for the sensor they went with the PMW 3327 which is a little lower end of a sensor than I was expecting given the Pro name. I wish this had the 3391 that the Nightsword has, but the 3327 is based on the 3325 only it has a wider DPI range. Overall at 12,400 DPI you aren’t going to need or care about higher and it is an optical sensor with a good reputation so far. It is also used in the HyperX Pulsefire Core and a whole list of mice that I haven’t heard of as well. 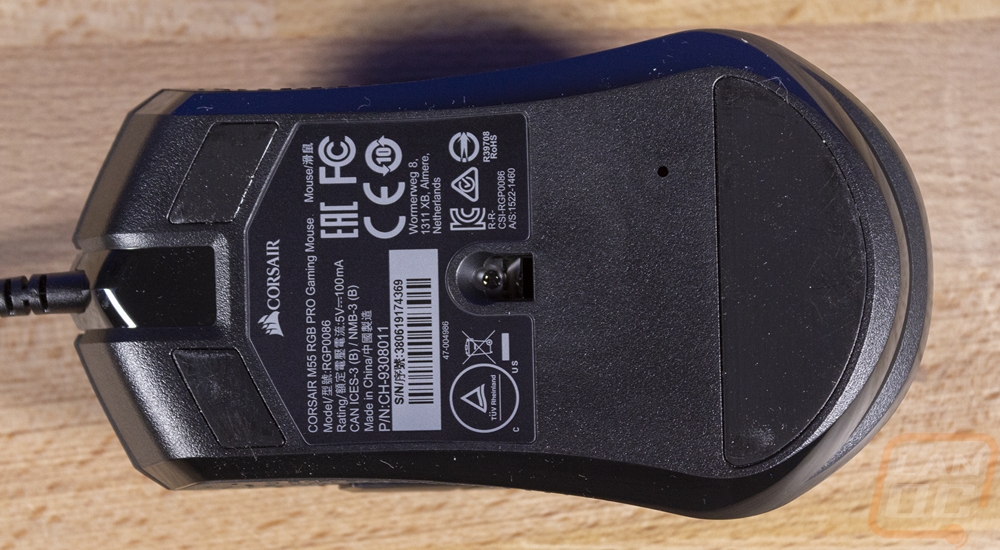 For the cord, the M55 RGB Pro has a sleeved cable and with that, it includes a Velcro strap to fold up any cord you aren’t using or for transportation. The USB plug at the end is really unique with a Corsair logo and a knurled ring around the end that should give good grip to unplug it. A unique plug is nice because it helps you find the cord when back behind your PC, unless of course you have even more Corsair hardware then you might have some confusion. 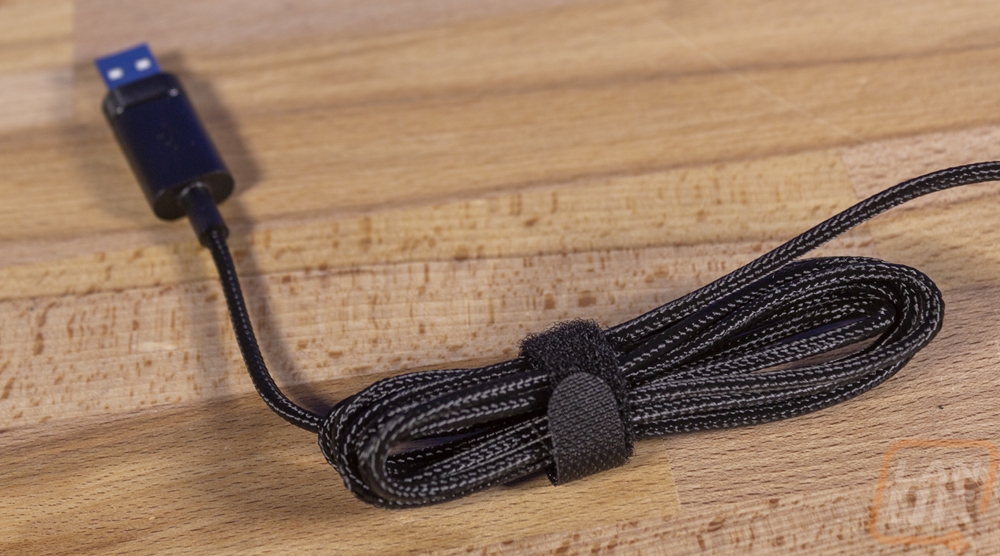 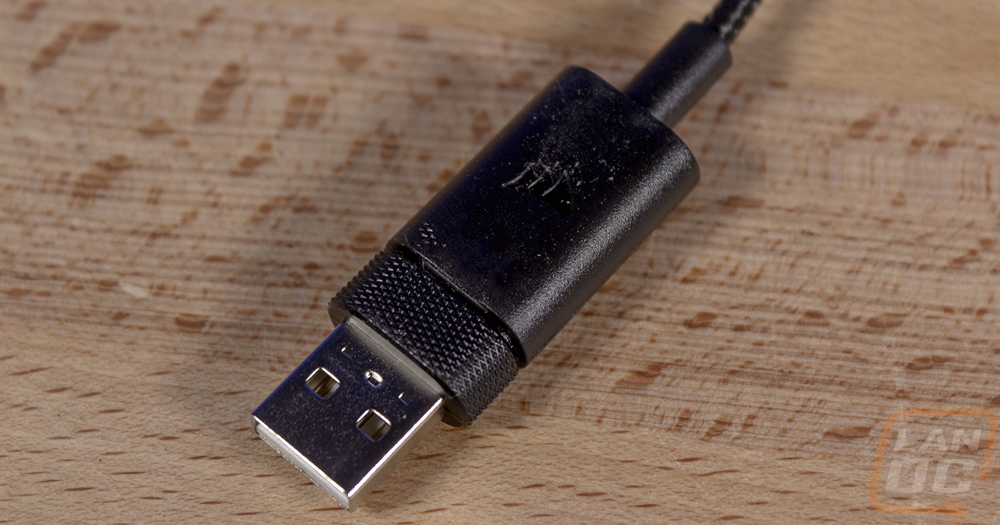 While Corsair has the M55 RGB Pro listed at 86 grams It did weight in at 88 on my scale. Some of that could be from the cord. Overall though this is a weight I am happy to see though I would really love to see Corsair give the ultralight mouse market a try as well. 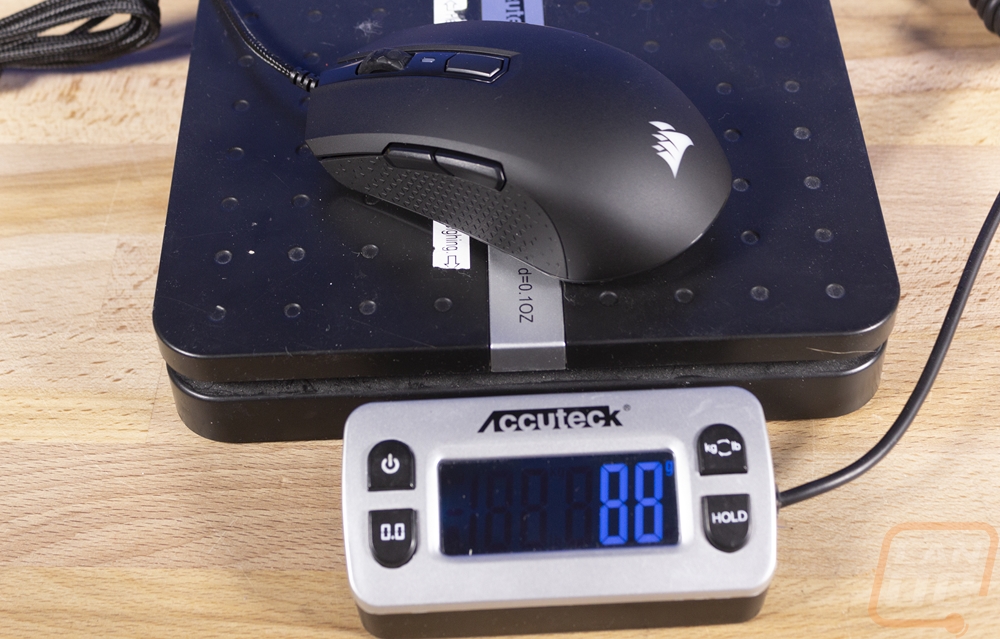