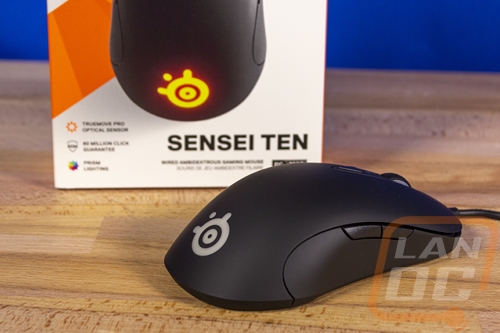 Now for testing, I have been using the Sensei Ten for about a week which is a little less than I would like, but our sample came in after the launch and I didn’t want to keep everyone waiting on checking it out too long. On the plus side, with a lot of the mouse sharing the traditional shape and features there are a lot of aspects I don’t have to focus on too much in my testing. Which speaking of, by replacing it as my main mouse I have had the chance to use it while gaming, editing photos, and videos, and of course normal everyday web browsing. All together It has seen a nice mix of use.

So how is the new mouse? Well even though I haven’t been using the Sensei daily for a while now the old shape was great to go back too. It fits in my hand perfectly and while similar to the G Pro Wireless that I have also been using its extra height at the back of the mouse feels a lot better in hand. Of course, I knew I would like the shape. The coke bottle sides are perfect allowing for a good grip without any extra rubber grips and the ambidextrous shape is going to fit both left and right-handed users. What I always liked about the Sensei is that even with the RGB lighting on its logo and scroll wheel, the mouse itself could easily blend in if you are using it in an office. The simple shape and styling aren’t over the top or going to draw a lot of attention. Extended use with the shape isn’t an issue at all and it didn’t require that I change my grip at all though I will say that I think the shape works well with multiple grip types. Now the rubber coating, well as you might have seen in my scale pictures, it has already started collecting oils.

As for the new sensor, like I said before the TrueMove Pro sensor seems to be a variation on the 3389 which is great because I love the sensor. In my testing, I didn’t notice any acceleration or oddities in tracking. Liftoff distance, while not adjustable, isn’t bad as well. I did see some people with concerns about that, but at least in my experience you barely lift off at all and it stops tracking so lifting and moving your mouse isn’t going to move you around on accident. The new glider around the sensor is really nice, I don’t push down on my mice but I know sometimes that can be an issue if you don’t have one around the sensor, that was a nice addition. The gliders used may not be hyperglides like the MM710, but they do feel nice and are an improvement over the original Sensei design which had a crown to the glider shape. The flat design doesn’t have any scrapes like the old Sensei’s would give me on my hard pad. I’m sure the sensor glider also helps with that as well.

As for the new 60 million click SteelSeries switches. They don’t sound like the extra loud 50 million click Omron switches but they do feel a lot more like the 20 million Omron. I don’t know what company they are working with, but I like the medium loudness that these switches give while having a solid and defined click feel. If they can really last 60 million clicks without weird double click issues or failures these will be a great switch for SteelSeries to integrate into their lineup. The same goes for the new TrueMove Pro sensor as well. My only complaint with it is the name sounding like TruMoo chocolate milk. I’m sure the marketing team was happy that its CPI is higher than the Logitech Hero16k sensor and the IPS at 450 is higher as well, but both have reached the point of being more than anyone needs in my opinion.

The only performance issue I ran into in my testing, beyond the oils in the rubber finish that is, was the mouse cord. It might be because I have been using a wireless mouse and before that the MM710 with its ultra-flexible cord. But the cord on the Sensei Ten was noticeable more often than I would like. Now my desk is admittedly a hot mess. As much as I work to clean it off, it constantly has things I’m testing or that I just finished testing on it like headsets, other mice, phones, so on. I could care less if I have a wired or wireless mouse, just as long as I don’t have to fight with the cord and while a lot more flexible than the past Sensei’s (other than the 310) I think the cord could have been a little better. The Sensei 310 cord which was amazing would have been perfect to use here, I don’t know why they wouldn’t. I know some people will mention the Ten’s weight as well and I will say that going from the G Pro Wireless to it you could feel the difference. I would really like it to weigh less, but it didn’t affect the performance in my testing. That said, if they brought the same mouse out tomorrow 20 grams lighter, I would take it.

We have 1650 guests and one member online