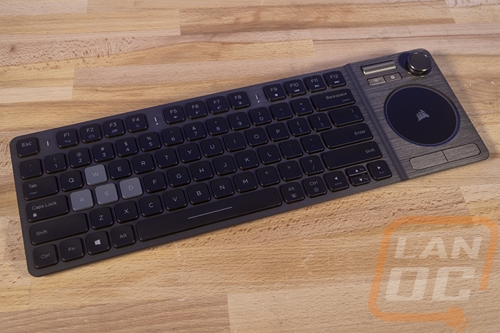 I’ve been looking for a nice wireless keyboard with a touchpad built in for a while now for use with our VR PC in the living room and I thought the K83 from Corsair might be a good choice for that. With the K83 having a wireless dongle as well as being able to connect to two different Bluetooth devices it ended up being more useful than expected by being able to also control our ShieldTV at the same time. The backlit keyboard was easy to read even in a dark room as well but it’s the touchpad/joystick combo that I really liked. You have a few options and with the button on the back of the keyboard and one up on the top edge, you can navigate without moving your hand at all. In fact, I almost never used the top-mounted left and right buttons.

The K83 did have a few problems. Initially, when setting it up I was a little disappointed to find out that it wasn’t supported by the PS4, this isn’t on Corsair specifically but I was hoping to be able to use it on the PS4 as my third device. Xbox One support was solid though. Beyond that, I wasn’t impressed with the performance of the wireless when using the included dongle. The range wasn’t bad when unobstructed but as soon as you put something like the PC in between the keyboard and the dongle it struggled. Even with line of sight using the touchpad and joystick was an issue on the built-in wireless but not when on Bluetooth. I hope it is fixable through a firmware update because after checking on Amazon reviews the issues I had seem to be a problem for most people. In other words, if you plan on using the K83 for the touchpad or joystick use Bluetooth if possible.

Is the K83 a good pickup? If Corsair is able to address the wireless issues with the touchpad and joystick yeah. It is an easy to hold keyboard perfect for living room use with backlighting that can control three different devices at a time. That doesn’t even mention the joystick and volume scroll wheel. Currently, the Logitech K830 (Corsair was suspiciously close on their name!) is the only keyboard that is similar and it only can be paired with one device at a time. As for pricing, the K83 has an MSRP of $99.99 which is the same as the K830 but at least right now the K830 is selling for half that on Amazon where the Corsair K83 is selling at its MSRP. Long term, I hope that the wireless issues are resolved on the K83 and I’m sure over time its pricing will come down a little to be closer what the K830 is. Those will both help make the K83 a much better choice as it stands out for features and build quality. Right now I would only recommend the K83 for someone who like me needs to control more than one device without pairing and unpairing. With the wireless issue fixed though the K83 would come highly recommended from me, so keep an eye out for any updates on that front. 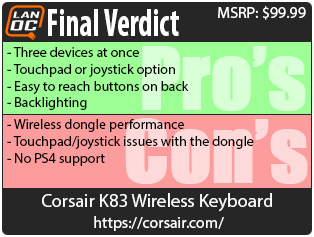 You might call him obsessed or just a hardcore geek. Wes's obsession with gaming hardware and gadgets isn't anything new, he could be found taking things apart even as a child. When not poking around in PC's he can be found playing League of Legends, Awesomenauts, or Civilization 5 or watching a wide variety of TV shows and Movies. A car guy at heart, the same things that draw him into tweaking cars apply when building good looking fast computers. If you are interested in writing for Wes here at LanOC you can reach out to him directly using our contact form.
Discuss this article
Log in to comment
Posts in discussion: Corsair K83 Wireless Keyboard

We have 554 guests and one member online