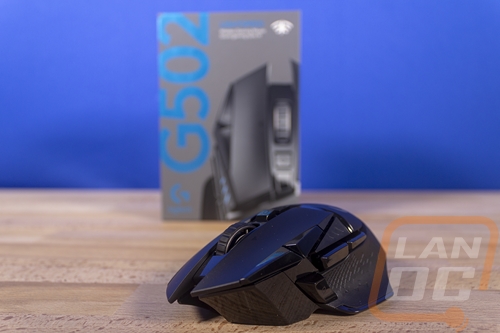 So a wireless G502 has been a long time coming, was it worth the wait? Well if you were a G502 fan before, Logitech did a great job of sticking with what people liked about it. You have the exact same shape and size, adjustable weights, and all of the same programmable buttons. The Hero 16K sensor is solid just like the 3366 of the original G502 so no complaints there. One of my big concerns was weight, the original G502, and the G502 Hero both weigh 121 grams which is on the high end, adding batteries and everything else to that could make the G502 which is already a meme for mouse weight even heavier. Impressively Logitech did manage to lower the weight while going wireless down to 106 grams. I have this as a pro and a con though because it is a significant improvement, but it is still a little heavy. Especially when compared to the G Pro Wireless.

It's with the wireless performance that The G502 really stands out. Logitech’s Lightspeed wireless tech feels just like wired mouse as far as latency goes. Battery life is great as well with 48 full hours of gaming with the lighting on or 60 with it off. You also have the option to use the PowerPlay mousepad and have wireless charging of the mouse all of the time. My only complaint was with the new charging cable. The old winged design would support a normal Micro-USB cable from any standard phone, but the design Logitech went with, while still Micro-USB, didn’t fit any other cables I had. It's nice to be able to just charge your mouse with the same cable you already have on your desk.

The issues I have personally had with Logitech mice with Omron 50 million click switches failing made me really happy to see that they went with the 20 million click design for this mouse. Only time will tell if any double click issues come up, but it does look like they are addressing the issue with the G502. My only other complaint with the mouse is just that the G502 isn’t an ambidextrous design, so lefties don’t have an option.

As for pricing, the G502 Lightspeed has an MSRP of $149.99 which right away is going to scare off a lot of people. This is the same MSRP as the G Pro Wireless and G903 as well but the wired G502 Hero is $69.99. That is a huge price difference and it eliminates one of biggest selling points of the G502. Personally I think given they have the same MSRP (and especially with the G Pro Wireless selling for $135 on Amazon),  I think the G Pro Wireless is a better option. The only exception to that are the sometimes problematic micro-switches. Now if you prefer an ergonomic shape or have loved your G502 for years, the G502 Lightspeed is going to be a great performing mouse if you can afford it. 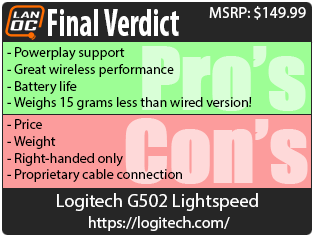 You might call him obsessed or just a hardcore geek. Wes's obsession with gaming hardware and gadgets isn't anything new, he could be found taking things apart even as a child. When not poking around in PC's he can be found playing League of Legends, Awesomenauts, or Civilization 5 or watching a wide variety of TV shows and Movies. A car guy at heart, the same things that draw him into tweaking cars apply when building good looking fast computers. If you are interested in writing for Wes here at LanOC you can reach out to him directly using our contact form.
Discuss this article
Log in to comment
Posts in discussion: Logitech G502 Lightspeed Wireless