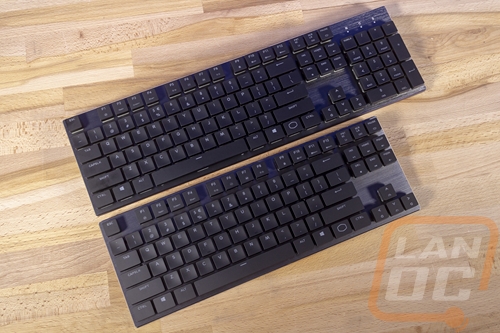 The best part about a keyboard like the SK650 and SK630 is that it is actually a big change. With a lot of keyboards, they have gotten to the point where they all feel the same, with the exception of some of the enthusiast-focused models that have been experimenting with other switches. So I was really curious how the new low profile design would feel, not to mention the new switches. After putting some time into using them including writing this review even I can talk a little more about them. So for starters, as expected, the new design specifically the switches and the keycaps really took some adjusting to jump into. Cooler Master stuck with a fully traditional key layout so that wasn’t the concern. But knowing where the keys are and not having errors is two different things. I fought with errors on this design a lot early and even as I type this my error count is up. It has almost everything to do with the keycap design. The nearly flat top doesn’t help home your fingers when you press a key and having the same cap width at the top as on the bottom they are closer together so I fat finger keys next to each other a lot. This is something that will go away over time, like I said I’ve seen a big improvement already, but just know some people will need a little adjustment time with this board.

Now the form factor as a whole, I love. The SK boards take up almost no more space than the keys do, around the outside edges of the board there isn’t any space wasted. So you get a full keyboard but in a very minimalistic layout. It is very Apple-like, especially with the squared off keys. I like the form factor for portability. I have used TKL and 60% keyboards for years for LANs and also to keep some desk space when I have more than one keyboard on it. These boards are perfect for that, the thin design will fit good in your bag while still getting the mechanical typing experience. The keycap design does have one big benefit here, the keys don’t catch when going in and out of a bag. Traditional keycaps like to catch and can break off the switch stem or the keycap stem when doing it a lot.

So with the mechanical experience being the main thing that sets this apart from an even thinner membrane keyboard, how was the typing experience on the MX Low Profiles. Well, for starters they only have reds right now. So you only have the linear option, I personally would really love a brown or clear experience in this form factor. The new switches have a total of 3.2mm of travel and activate at 1.2mm. Cherry does have a speed version with a 1mm actuation point but Corsair has that exclusivity right now as far as I know. For comparison to normal Cherry MX switches, the MX Red has a 4mm total travel and a 2mm actuation point. So while being much shorter, the throw is actually only .8mm shorter. The red ends up with the same actuation point as the MX Speed in the normal form factor, which explains more my typo issues, I have been known to have the same issues with other shorter actuation point switches. You still have the same 45 cN force and mostly the same feel as well. They do feel more stable which I’m sure came from that tube around the stem that keeps the switch in contact with the top of switch casing as you press it down.

Beyond the switches, I was curious how the different stabilizers would work out. There is a little rattle, I didn’t see any lubrication on them so adding a little could cut down on any of that. Both SK boards keep things really simple and take advantage of the function layer heavily. I don’t typically bother with using function layer media controls, but I was happy that they put them in an area that could be controlled with one hand. Also with the function layer, there is a learning curve with anything more than basic lighting controls as well as the macro recording. But I still highly value having the ability to get lighting and macro controls without any software. Cooler Master seems to be mostly on point with their software, but I would still prefer to not have to run 50 different programs when possible. I’m glad that is even an option.

Speaking of the lighting, how did the RGB lighting work out with the new switch type. Well as I expected there is a consistent light bleed around all of the keys because of the bezel-less design. The keycap design also manages to leave larger gaps between keys so the glow is even more pronounced. I did notice a surprising amount of lighting hot spots though. Specifically, my R and 4 keys had it the worst, but a lot of keys didn’t have consistent lighting across the legends. The 4 and R keys though would look like a different color sometimes, almost pink when the RGB is set to purple, yellow when I have a mixed green but consistent when solid green. I think maybe the red LEDs on those keys were a little too bright. This was only on the SK630 though, the SK650 didn’t have the issue, so it could be a localized issue. Beyond that lighting was good as you can see in the pictures below. 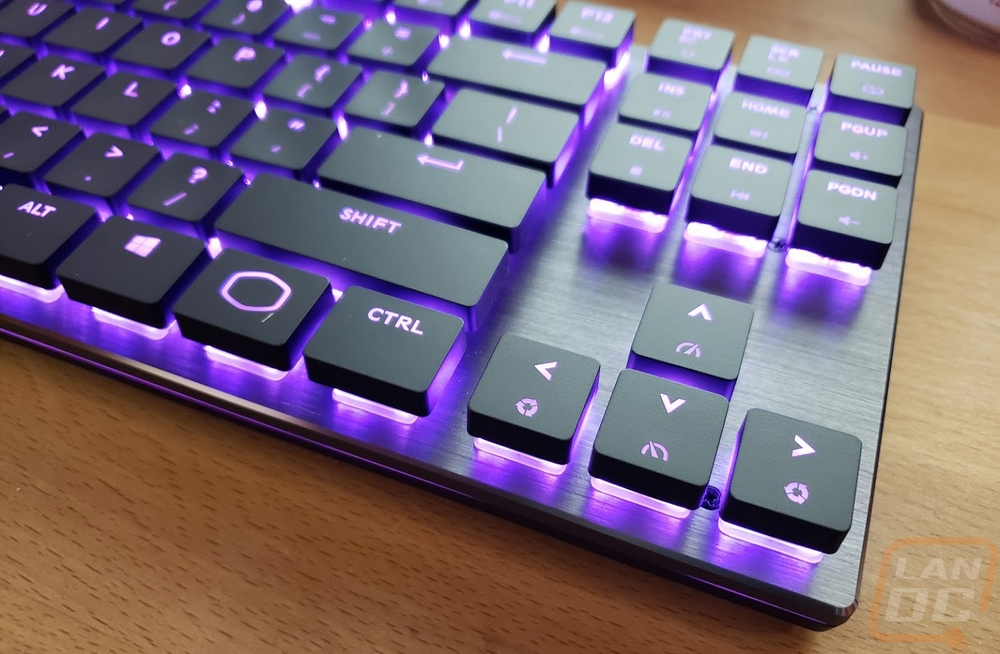 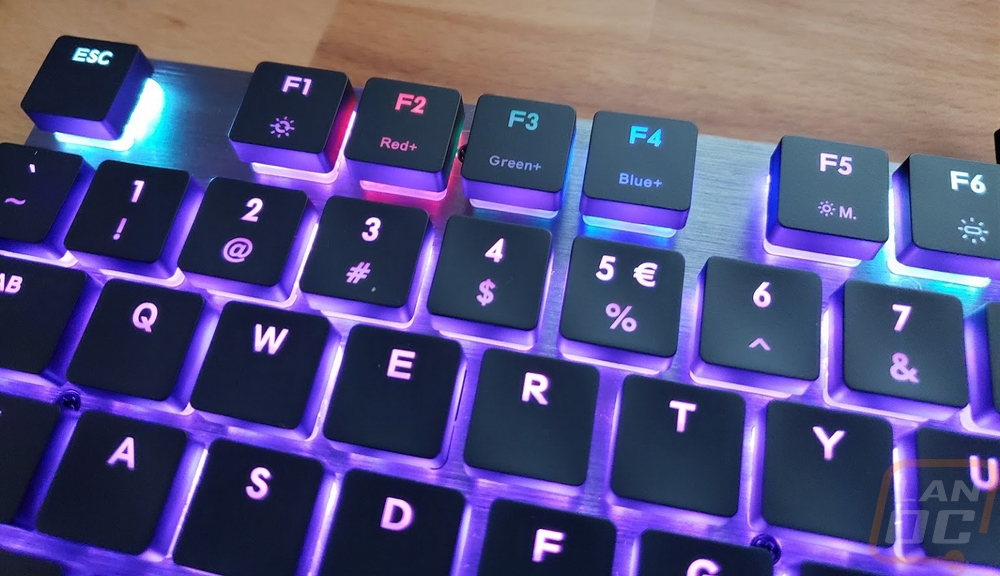 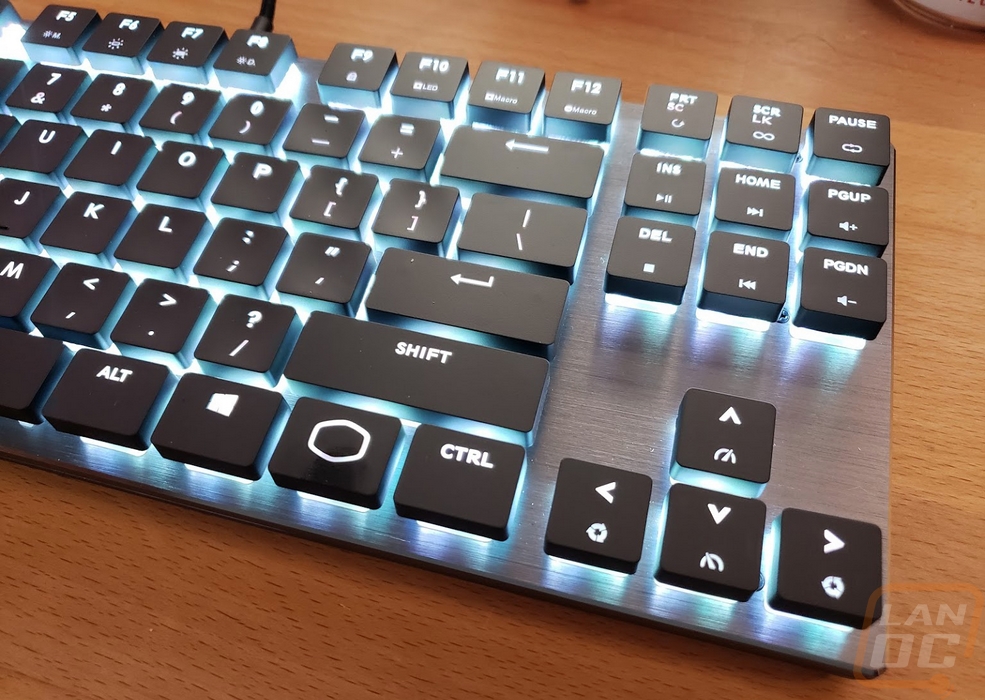 We have 824 guests and one member online