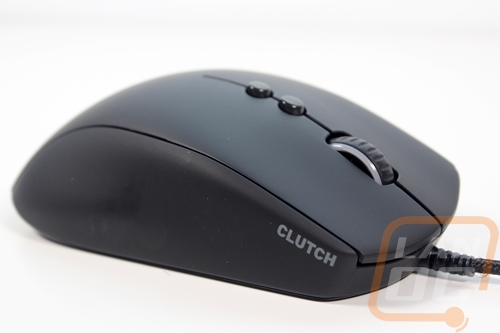 Even though I had been impressed with all of the Func branded products I have had the chance to check out, when going into this review I wasn’t really sure what to expect from Fnatic Gear. Sure they have the branding and along with that access to different professional gamers for testing, but a lot of manufacturers have worked with the pros and still brought out bad products. The Clutch G1 though ends up being a good mouse. Part of that is because they did a good job learning from some of the classic mice like the Deathadder, the Sensei, and the Microsoft Intellimouse that all of the great mice are based on. The larger size and good shape made the mouse comfortable for my big hands, even after a full day of use. They also went with a good optical sensor, the 3310 is a little dated and most have moved on from it but it is a solid sensor and that is all you really need. There ended up being a few things I hope to see them add in the future with their software, but overall I was happy with it and they managed to not make it clunky or weird like most companies do.

As for issues/downsides, the Clutch G1 could still use a few tweaks. The placement of the side buttons left one of the two buttons a little out of my reach. I also would like the option to be able to turn down the liftoff distance, or at least ship with it set a little lower. Beyond that, for the shape, if I had my way there would be slightly more curve on the right side to make it easier to grip for people who lift their mouse up at times.

For their first mouse on the market, the Clutch G1 is great. Really a lot of companies who have been in the market for years still haven’t brought out a mouse as good as this, so Fnatic Hear should be really proud. With an MSRP of just under $60 they just about have it priced right as well. It is in line with the G402 from Logitech, below the Deathadder Elite, and above the SteelSeries Rival and all of those, I would consider to be direct competitors. I’m really looking forward to seeing what Fnatic Gear brings out next, it looks like they have a good grasp on the market. 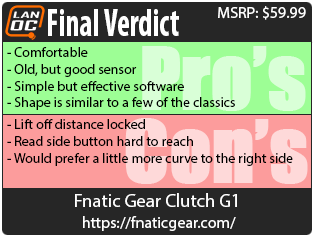