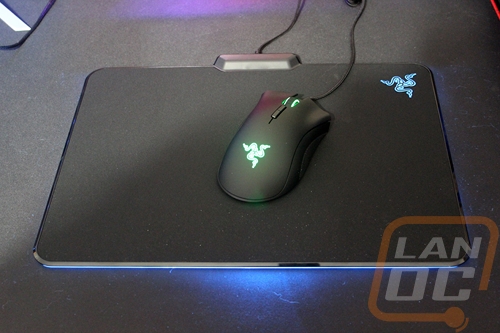 With the Deathadder Elite, Razer comes in at a bit of a disadvantage because most of the Deathadders in the past have been good, so the expectation is that it continues being a good mouse. Because I know things like the shape are good, I spent more time looking at other details for issues. This is where I had complaints like my issues with the software popups when you don’t have the software installed and the fact that you are forced to log in. But really beyond those issues the software is actually really good. It is easy to navigate and splits things up logically.

With the Elite Razer also set out to improve on the design with an updated sensor and new Razer collaboration switches. The sensor is actually really good and is based on the same sensor that people like in things like the G502 though there are a few small tracking issues that come up when you crank the DPI up into the 18,000 range. The new switches seem good in initial testing and most people wouldn’t run into any issues with them. In fact, the new change with them that adds a slight raise in the response time should actually improve user experiences with less debounce issues, but I wasn’t a fan of Razer marketing the new switches as an improvement in reaction time when they don’t seem to show that in testing. I also didn’t like them quietly dropping the onboard memory for storing your mouse settings without software, though with it basically forcing Synapse on you and the cloud sync I do get the reason for doing it.

Beyond that the Deathadder Elite still has the kick ass Deathadder shape that most people seem to like. They even improved the side of the front glider on the Elite so they will hold up even better than in the past. But even with the improvements, the Elite doesn’t really stand out compared to past Deathadders. So it's not like previous owners are going to want to run out and grab the latest model. It is a good enough mouse that I would still recommend people check it out, just like previous Deathadders. So what about its pricing? Well, that is another benefit. With an MSRP of $69.99 from Razer, it should end up being a well-priced mouse in the future as the price starts to settle a little. Even at its MSRP, it is a better mouse than a lot of the $100+ mice out on the market. It is priced in like with some of its direct competition like the G502 as well. So if you are on the market for a new mouse and haven’t tried a Deathadder yet, the Elite is a good pick up or if you poke around you might even find last years Chroma for an even better value. 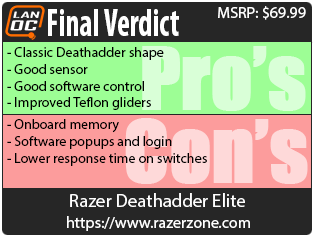